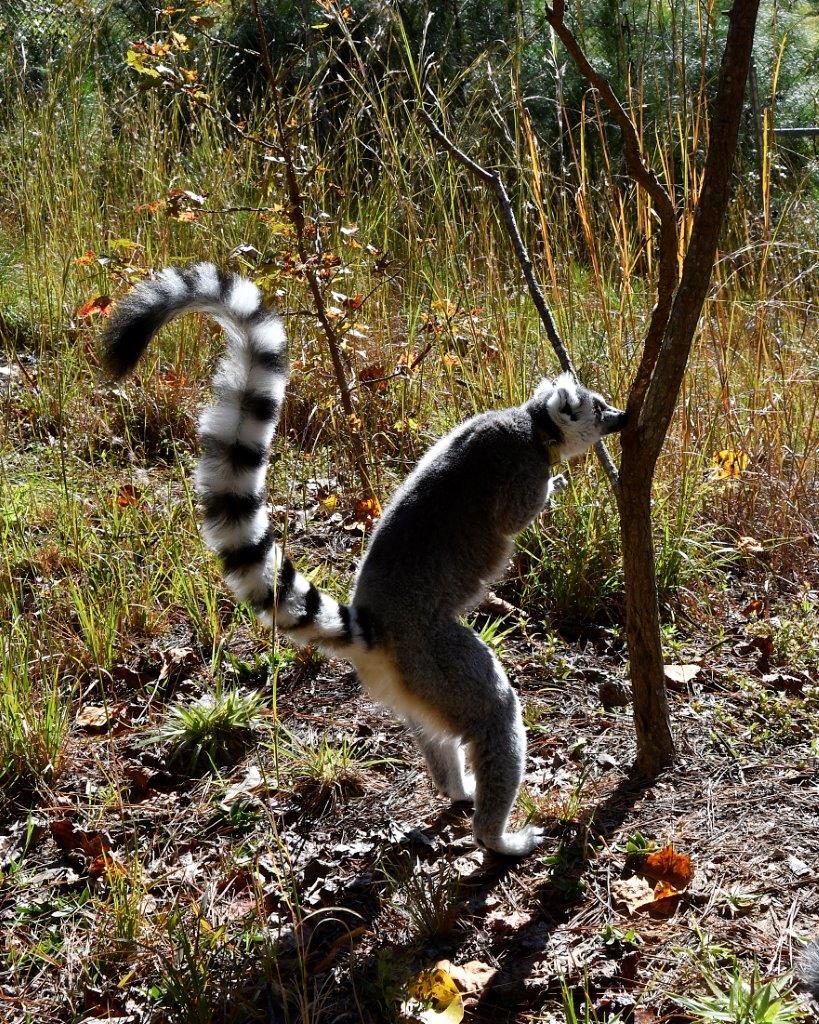 Six-year-old male ring-tailed lemur Jones may look like he is a lemur somewhat lacking in arms as he sniffs a sapling in Natural Habitat Enclosure #9, but rest assured, he is a well-armed male in the prime of life! His odd posture is due to the fact that, in typical male ring-tail marking behavior, he is mixing secretions produced by scent glands on the insides of his wrists (antebrachial glands) with stinky secretions produced by glands on his chest (brachial glands). When the two secretions are well mixed, Jones can proceed to mark his territory with his wrist glands (which he will wind up doing here) or, if he were facing a rival, thoroughly anoint his tail for a stink fight.

Peak breeding season for ring-tailed lemurs is fast approaching, with 25% of breedings occurring in October and 50% in November. In preparation for facing rivals, males begin to significantly beef up in late summer (in more ways than by just putting on weight… !) and a close look at Jones will reveal that his time at the jungle gym has indeed been well spent, as he is in peak breeding season form! Alas for Jones, there are no ring-tailed lemur females designated for breeding at the DLC this fall, so he will have to be content with just stinking up the place! 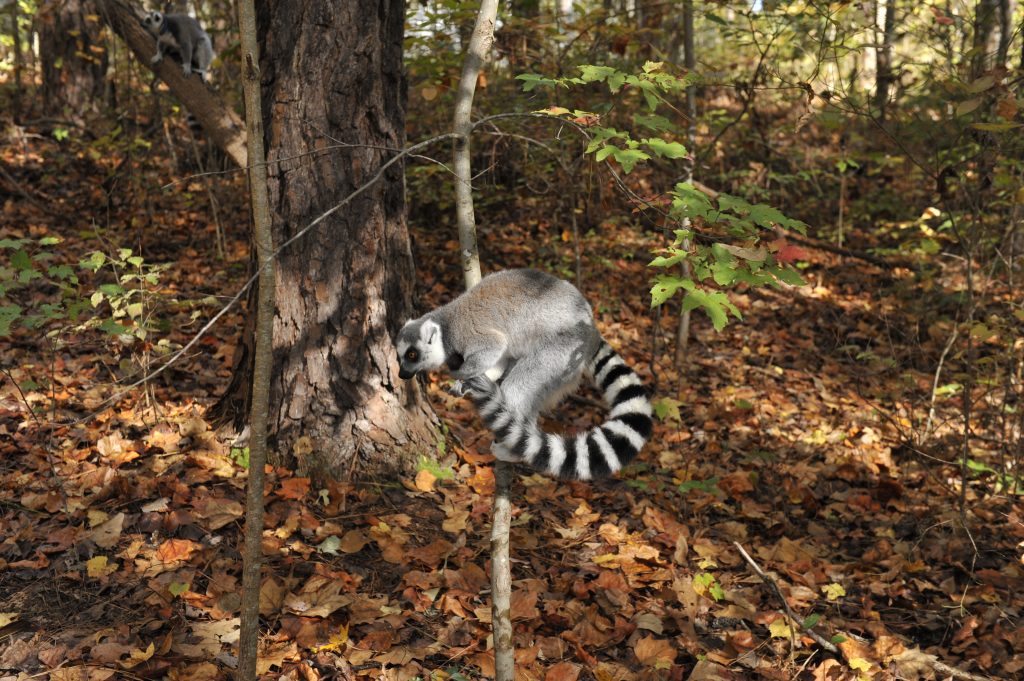 A ring-tailed lemur male, Aracus, anoints his tail while stink-fighting. 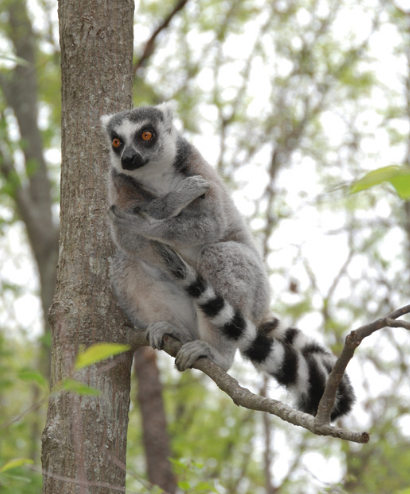 In a stink fight, a male ring-tail competes with other males by rubbing his tail with scent from his wrist glands. The rival males then wave their tails in the air, wafting their “fragrance” toward each other. 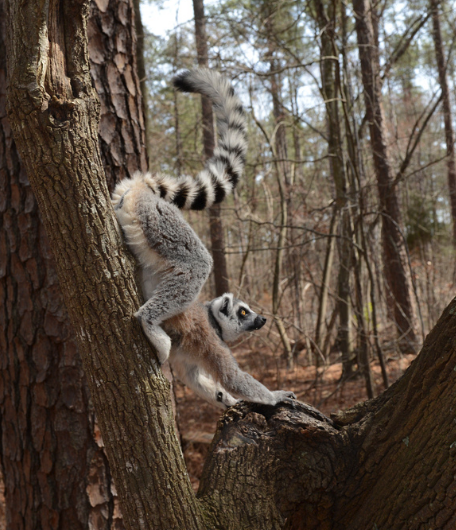 Randy, a male ring-tailed lemur, scent-marks his territory in Natural Habitat Enclosure #9. Male ring-tails have scent glands on their wrists, chest, and scrotum — and each produces a different scent. 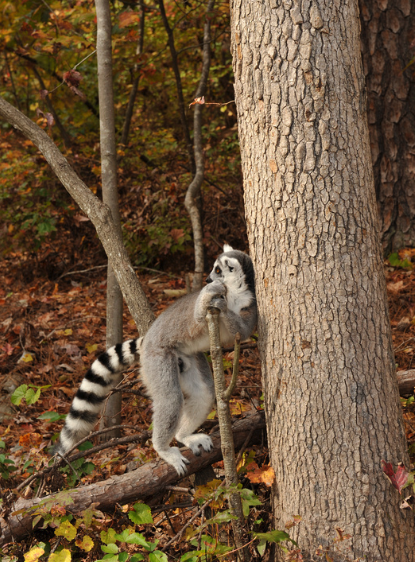 Male ring-tailed lemurs have a scent gland and a spur on each wrist. The spurs are used to gouge tree trunks before smearing them with scent. 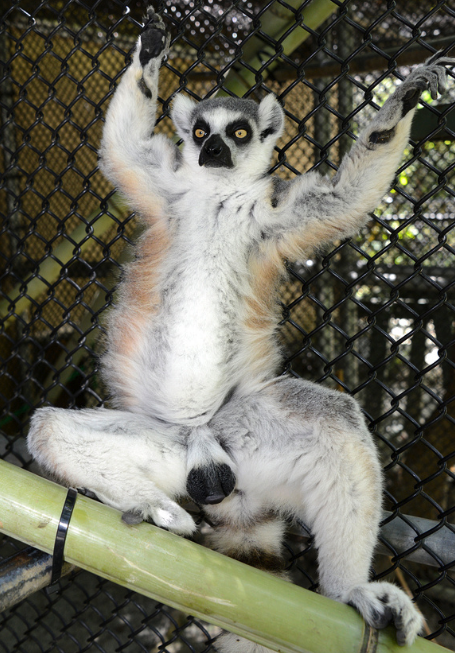 Randy sunbathing indoors, with the scent glands and spurs on the insides of his wrists clearly visible. 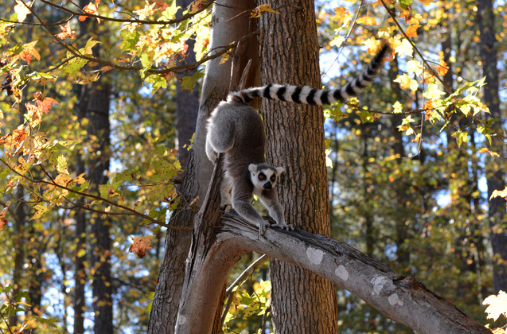 Willow scent-marks a tree. Whereas male ring-tailed lemurs have multiple scent glands, females have just one scent gland, which is located in the genital area. Researcher Christine Drea has discovered that female ring-tails’ scent is more complex than the males’. Via scent, females may advertise not only their fertility, but the presence of a pregnancy and how far along it is. (See Primate’s Scent Speaks Volumes.)