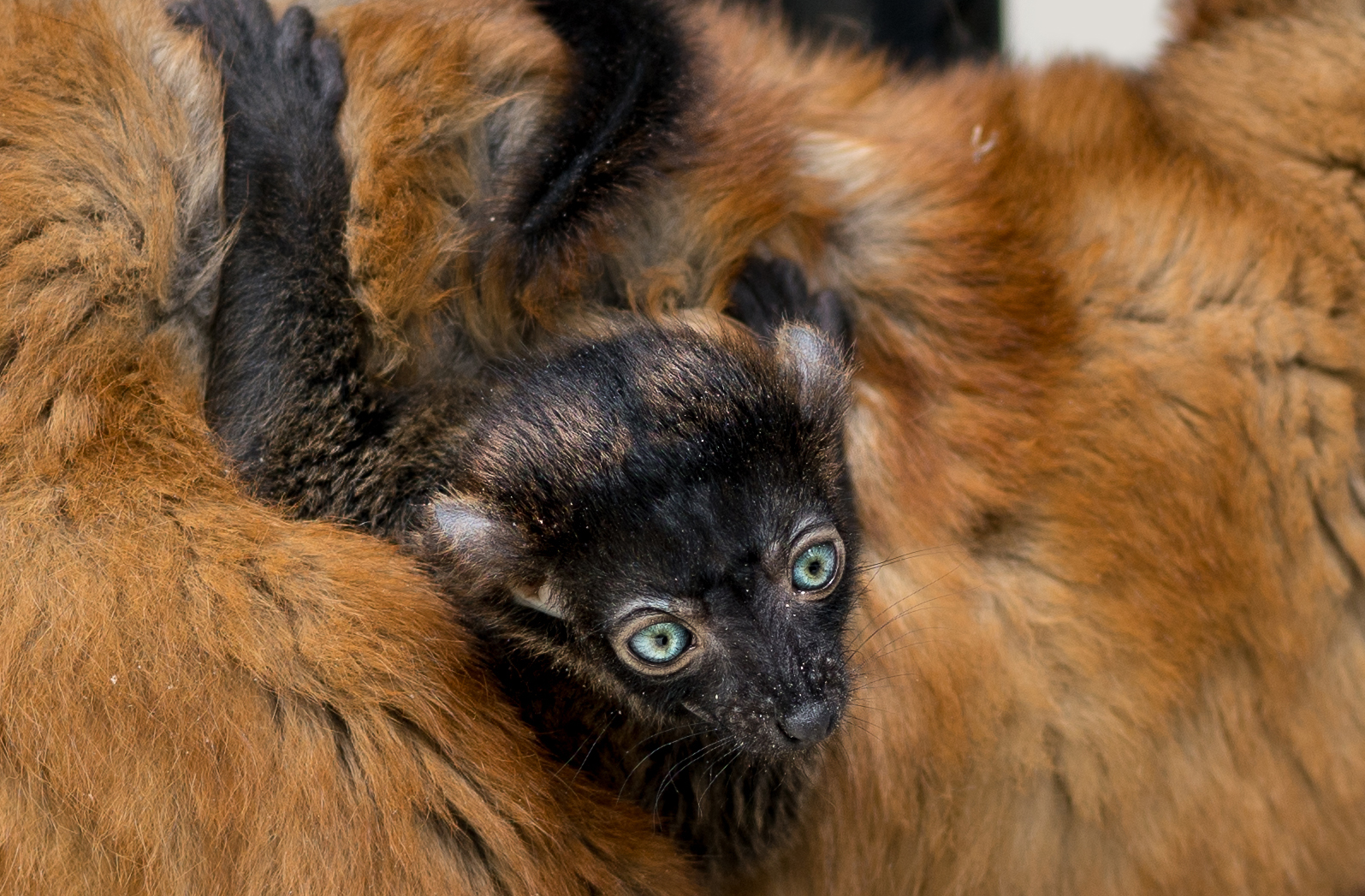 Named after fellow dark-haired, blue-eyed stunner Tom Brady – quarterback for the New England Patriots and now the Tampa Bay Buccaneers – Brady was born on April 3, 2020 to parents Leigh and Quinn.

Now 1.5 months old, Brady still rides on Leigh as she bounds through the forest, though now he clings tightly to her side as opposed to riding under her belly like a fanny pack as he did the first several weeks of life. “He’s also begun testing his legs,” says Brady’s caretaker Brittany Canfield. “He’s started reaching for leaves any time Leigh is stationary, and bouncing off her back playing whenever she gives him the opportunity.”

Three-year-old Leigh, a first-time mom, was attacked and later rejected by her own mother, Margret, when she was just five weeks old. That she has matured into a healthy, well-adjusted adult and successfully raised an infant of her own is a testament to the skill of the DLC’s animal care and veterinary staff, who not only nursed Leigh back from the brink of death but also took extra steps to promote socialization with other lemurs and the development of “lemur skills” for her long-term well-being.

“Despite having had a rough start herself, Leigh has been an incredible mother,” says Brittany. “She is protective of Brady but she’s also gentle, nurturing, and patient… extremely patient. She even lets Brady bounce off her head and pull on her ears during playtime!”

Leigh has also stepped into the role of dominant female, the norm in lemur relationships. “She was never a dominant female until she gave birth,” Brittany says. “Now with the baby, she’s assumed dominance not only over her mate Quinn, but over all the other lemurs who reside in her forest!” The family shares the multi-acre wooded enclosure with sifakas Lupi and Gabe and ring-tailed lemurs Lilah and Aristides.

Brady and his parents were born through the DLC’s conservation breeding program, which has celebrated over 3,285 births since the Lemur Center was founded in 1966. Together, blue-eyed black lemurs at the DLC and other institutions worldwide form a genetic safety net for their species. Each new birth helps sustain a healthy and genetically diverse population of blue-eyed black lemurs for the long-term future. Brady isn’t just cute; his birth is critical to the survival of his species. 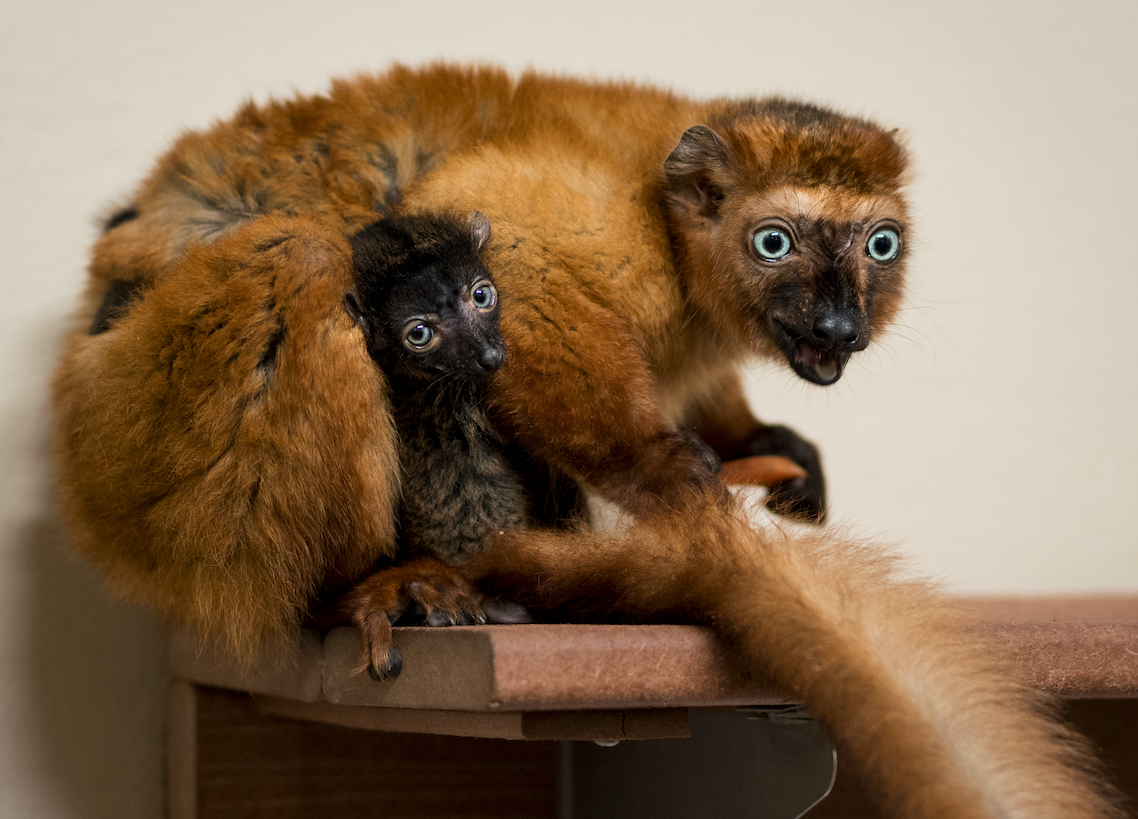 Blue-eyed black lemurs are the most distinctively sexually dichromatic of all the lemurs. Adult males are black with blue eyes, whereas females are orange-brown with blue eyes. Infants are born with the mother’s orange-brown coloration, and males begin to turn black at 5-6 weeks of age. As he grows, Brady is gradually shedding his orange baby fur and beginning to sport his “big boy” coloration. 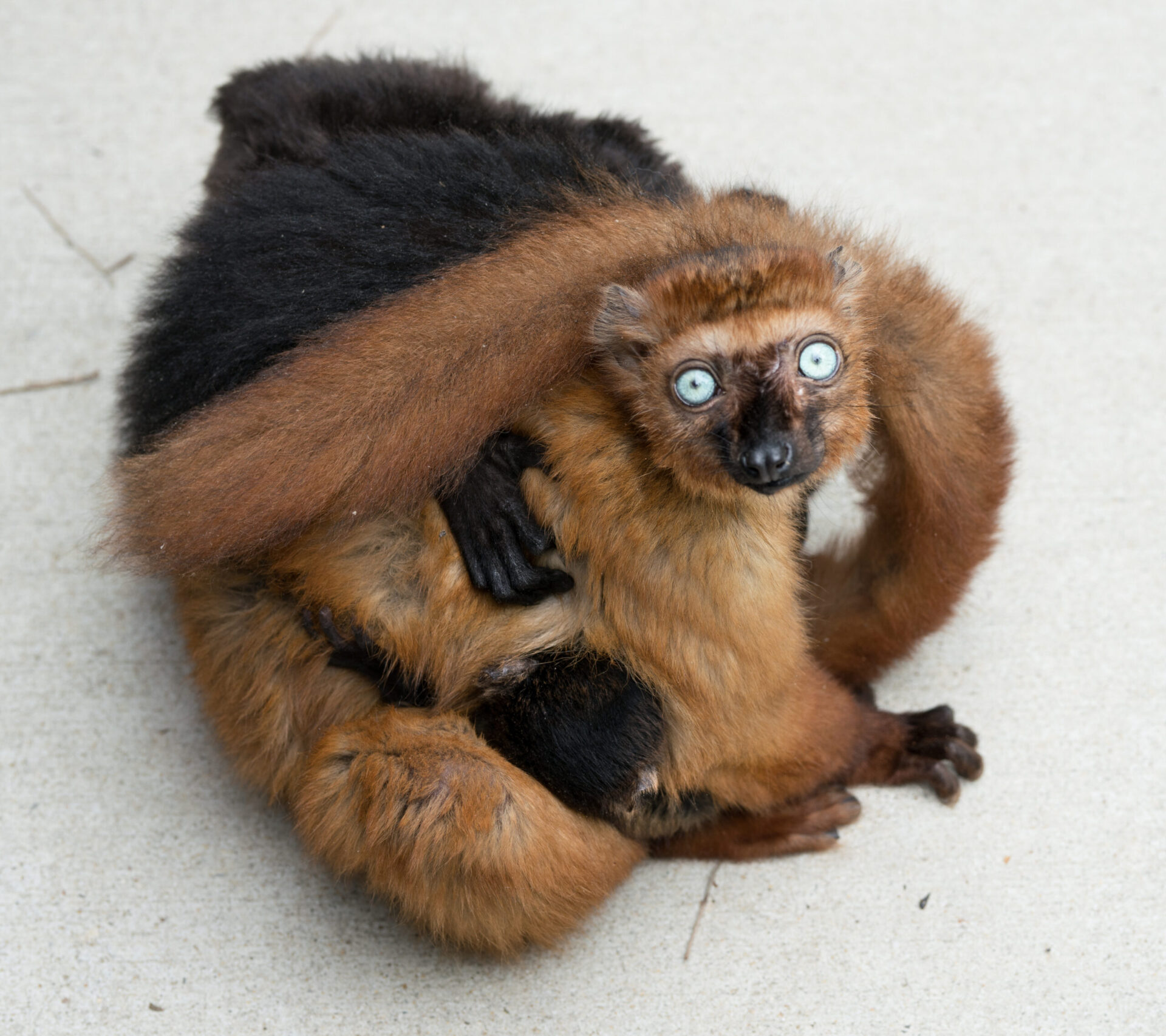 Leigh and her mate Quinn snuggle into a “lemur ball” while Brady, whose head and ears are visible near Leigh’s elbow, nurses from mom.

Brady clings to Leigh’s side as they bound through their multi-acre tract of forest. At the DLC, blue-eyed black lemurs are named after blue-eyed celebrities. Brady’s namesake is Tom Brady, arguably the greatest NFL quarterback of all time.

Brady’s father, Quinn, and ring-tails Aristides and Lilah wait at a distance while Leigh nurses Brady. “Leigh was never a dominant female until she gave birth,” says the family’s’ caretaker, Brittany Canfield. “Now with the baby, she’s assumed dominance not only over her mate Quinn, but over all the other lemurs who reside in her forest!”

If you’d like learn more about this critically endangered species while supporting their care at the DLC and their conservation in Madagascar, please consider symbolically adopting Presley, a blue-eyed black lemur, though our Adopt a Lemur Program. Adoptions start at just $50 and support the $8,400-per-year cost to care for one lemur at the DLC.

Want to see even more cuteness? Check out this video of Brady eating an apricot while clinging to mom Leigh!

The first months of Leigh’s life, from her rocky start to her nearly-normal lemur present, are documented in the article “TLC for a ‘Tough Little Cookie,'” printed on pages 22-26 of the Lemur Center’s 2018 annual magazine. 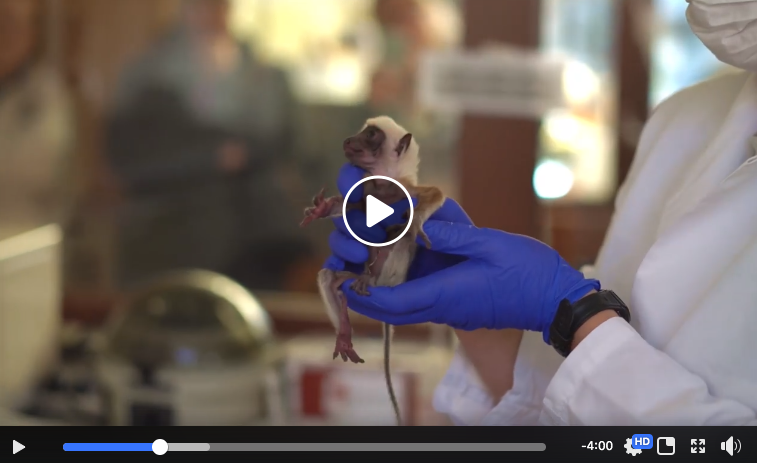 Who doesn’t love baby lemurs?! As part of our EarthDay#50 celebration, we created this video to highlight our conservation breeding program, and to show you a few familiar baby faces while we’re at it! Our conservation breeding program is coordinated with national and global partners to ensure the best possible future for lemurs in human care, and in the wild. While these baby lemurs are adorable, they are also critically important to our future successes in preserving these precious animals.

It costs $8,400 per year to feed, house, and care for each lemur at the Duke Lemur Center — including Brady! Please consider making a donation or symbolically adopting a lemur today. Your gift at any level makes a difference!