Announcing a New Endowment for the Duke Lemur Center

With so many challenges in our world these days due to COVID-19, it’s been truly uplifting to spend time writing this article honoring a wonderful friend of the Duke Lemur Center who recently made an incredible gift to us. With the donor’s permission, we would like to share her story with our followers, friends, and supporters.

It’s an instantly humbling conversation when a donor reaches out to you to share that they are making plans to provide a substantial gift after they pass away, naming us as a beneficiary in any way or as a recipient of part of their estate. Of all the places and worthy causes in this world, they are choosing us – the Duke Lemur Center – for this very important gift! Wow – what an honor that is, and there really is no possible way to express what that means to us and our work. It’s also incredibly exciting when a donor establishes an endowment that will support a need of the center in perpetuity during their lifetime. Recently, we had both honors from a donor whose generosity and love of animals will shape a beautiful story for the Duke Lemur Center’s future in its care of our precious colony.

Barbara Colyear Parkening is a dynamic, independent woman who is deeply passionate about advocating for animals. Meet her and you will immediately hear in her voice a zest for a great many things in life, including travel to faraway places and observing wildlife in their natural habitats. She has been on journeys to places that most of us dream of seeing. She even crossed paths in 2000 with Martin and Chris Kratt while they were filming tigers in India for the show Zoboomafoo! Her love of lemurs really is just a very small part of her story, yet it is a shining example of her generous character. Since she was a small child, she not only adored animals, she was fascinated by wildlife. As a young adult, she was the youngest in a group of seven zookeepers at the Los Angeles Zoo and helped with primates, including a Bornean orangutan named Eloise, who is still alive today. She later became known for her willingness to take in wild animals and even now, she cares for rescued dogs, other animals, and horses. 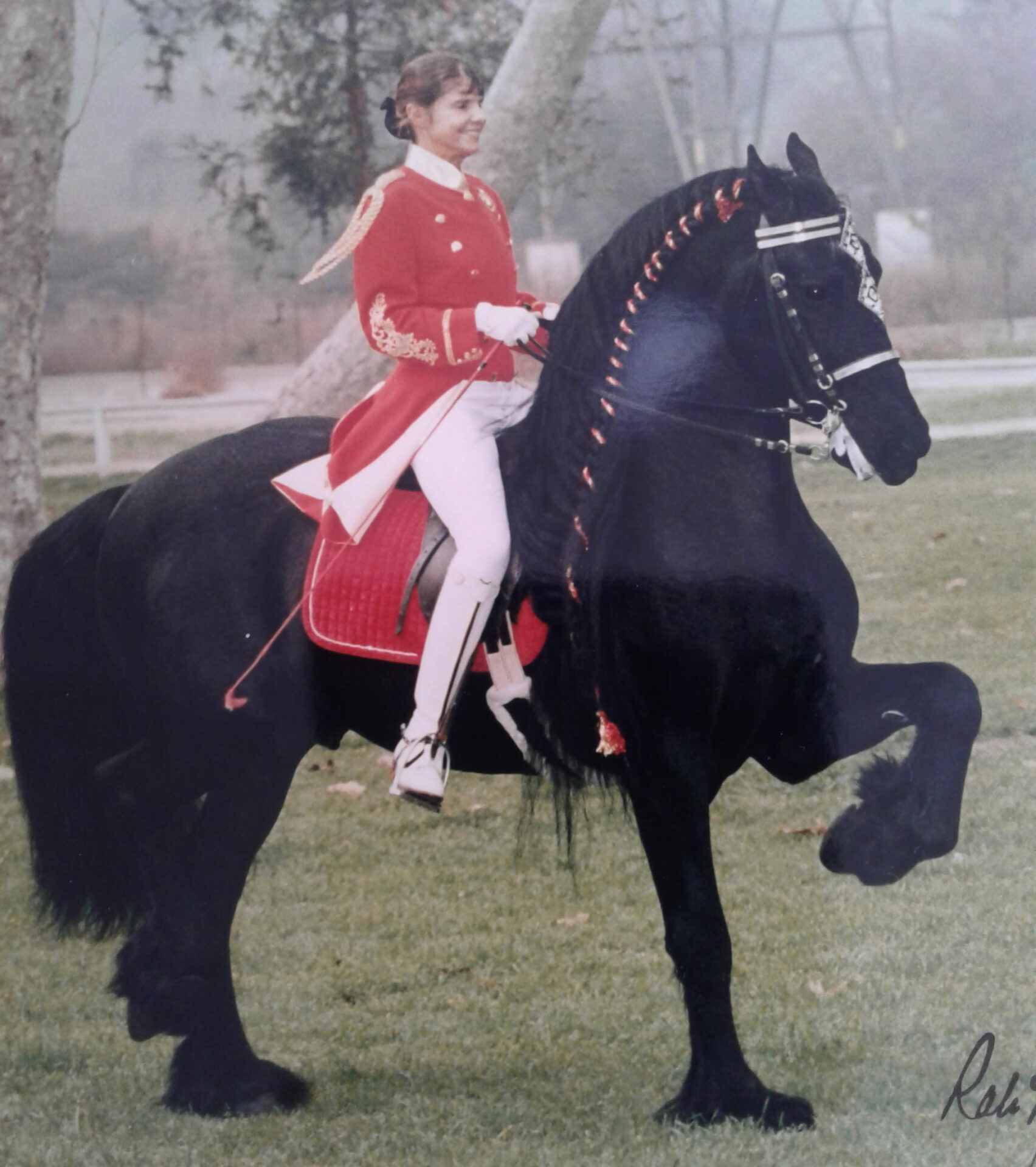 In addition to her love of all animals, Barbara’s first passion since she began riding at the age of 13 is horses, and her typical day is centered on them. “I get up every morning at 3:00 a.m. and take care of the horses at the LA Equestrian Center, then I drive 50 miles to work horses at Hilda’s,” she explained. Barbara has ridden with Hilda Gurney, two-time Olympian and bronze medal winner, for more than 34 years. Barbara is an accomplished rider, having achieved bronze, silver, and gold medals from The United States Dressage Federation. And, she had her own traveling horse show for more than seven years.

The story of how Barbara became connected to the Duke Lemur Center began many years ago, when a friend told her about a really unusual animal whose owner who no longer wanted the responsibility of caring for it. After seeing the animal, a common brown lemur, Barbara decided that she had to help it. Initially knowing nothing about how to care for a lemur, she did her research to provide the best care possible for the animal.

“It is obvious these animals do not make good ‘pets’ – not at all! They are wild animals. Yet, I was committed to doing what I could to help this special creature, and so I did the best I could,” explained Barbara. She did her research and essentially created a space as close to one that a zoo could provide for the lemur, who she named Forrest. “It’s in memory of Forrest that I’m making this special gift of my lifetime to the Duke Lemur Center.”

After Barbara learned about the Duke Lemur Center and developed a deeper understanding of lemurs through her work with Forrest, she visited the center and was very impressed with the animal care and vet staff. “They didn’t judge me, they were so understanding and kind to me, and everyone I met was so passionate and happy to talk with me about their work to protect these very special creatures. I never forgot that,” she explained. She began to make donations to the DLC in 2005 with a gift to the Adopt a Lemur program, and has been a loyal donor ever since. 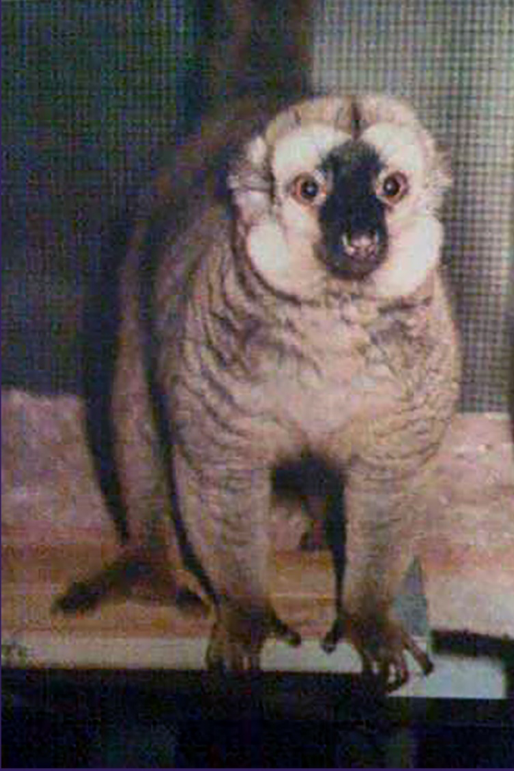 Forrest, a common brown lemur. “It is obvious these animals do not make good ‘pets,’ says Barbara. “They are wild animals. Yet, I was committed to doing what I could to help this special creature, and so I did the best I could.”

At the end of 2019, Barbara and her financial advisor worked with us to customize an endowment agreement to support the Duke Lemur Center’s care of its colony. The agreement was formally signed and submitted and the gift to establish the Barbara Colyear Parkening Fund for Lemur Care was received. So, in the coming year, the fund will make its first payment toward its purpose. And it will continue to support lemur care in perpetuity. In addition, Barbara has formally made plans to provide a substantial gift to her endowment from her estate upon her death.

While the Duke Lemur Center benefits in many ways as a part of the great Duke University in Durham, NC, the support we receive from donors is very important to us. Annual contributions from individuals and businesses, special gifts to support unique priority needs, and legacy and endowment gifts make a tremendous impact on our ability to carry out our mission.

Barbara’s twin sister, Diane, had this to say about Barbara: “I am so proud of my twin sister for making such a generous donation to the Duke Lemur Center. From the time we were little, Barbara was always rescuing stray animals and bringing them home – much to our mother’s dismay. We grew up with hamsters, dogs, rats, horses, and one of my favorites was a raccoon named Bandit. He slept during the day in his kennel and roamed free at night. He would climb the tree next to Barbara’s window and come in to wreak havoc in all of our rooms. He was a joy to live with for at least three years before he wandered off. Barbara never says no to anyone asking for help with an animal. She is a very special person and sister.” 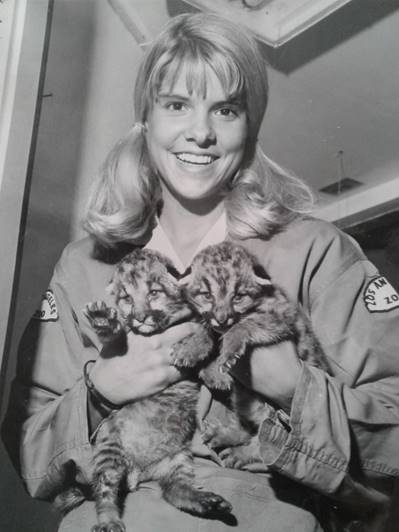 Barbara in uniform at the Los Angeles Zoo, where she was the youngest of seven women who worked at the zoo.

About the Duke Lemur Center

For more than 50 years, the Duke Lemur Center has been home to the largest and most diverse collection of lemurs found anywhere in the world outside of their native home of Madagascar. The Duke Lemur Center is the only organization accredited by the American Zoological Association and AAALAC International, organizations recognized for the highest standards of animal care and welfare of its members.

While the Duke Lemur Center is dedicated to non-invasive lemur research, it also is proud of the conservation work it has been conducting in Madagascar for more than 30 years. Additionally, it supports an education program that conducts tours of the center to help educate the public about the plight of lemurs, the world’s most threatened group of mammals. This includes a campaign to get the word out that lemurs don’t make good pets.