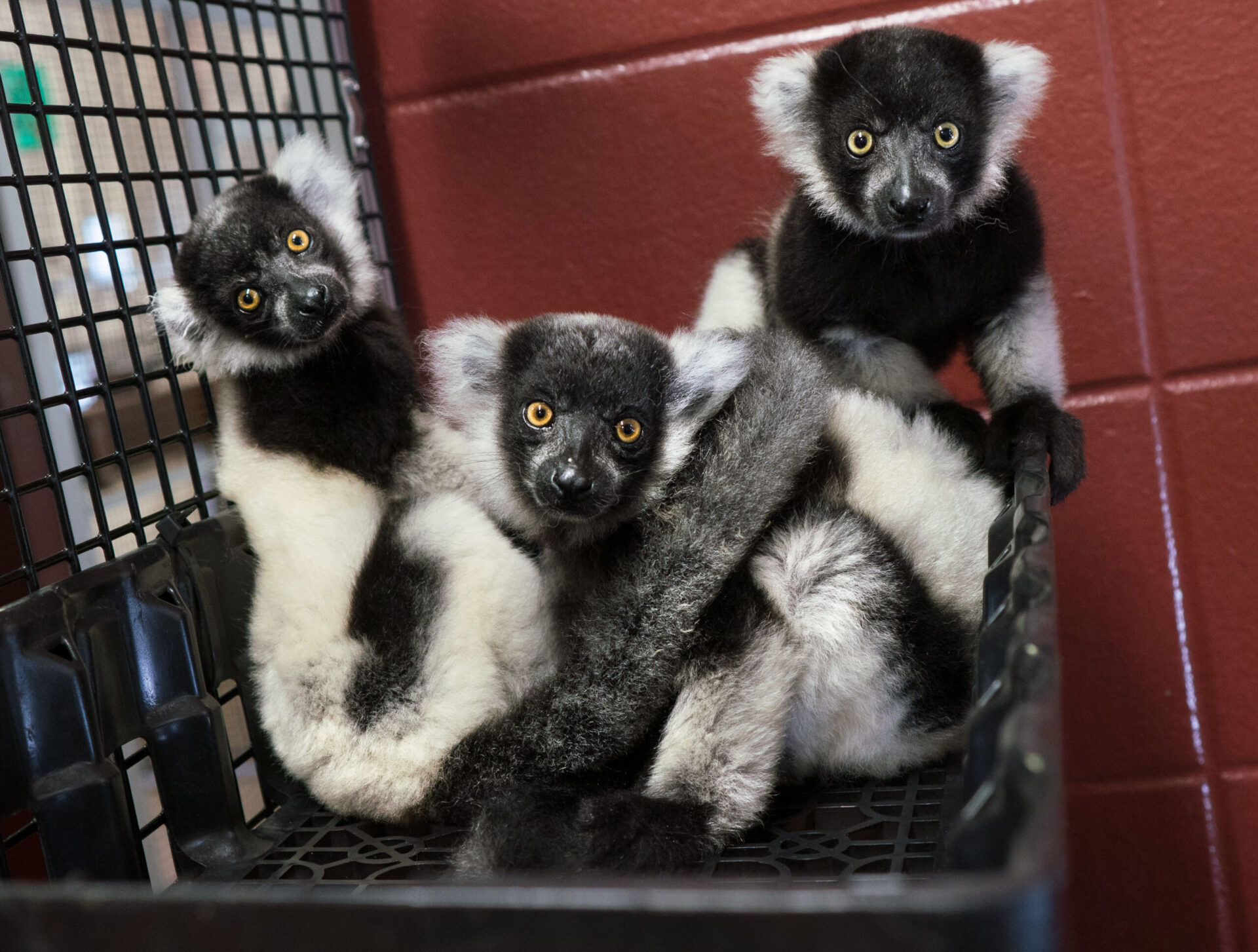 On Day 5 of #BabyWeek2020, the Duke Lemur Center is thrilled to announce the births of Sunshine, Orbit, and Sputnik – a trio of critically endangered black and white ruffed lemurs (Varecia variegata) born to parents Halley and Ravo!

“Triplets were a surprise,” says Melanie Currie, one of the infants’ primary caretakers. “Halley has had twins twice before, and her ultrasound had showed ‘at least two’ infants, so we’d assumed there would be two babies as usual. It’s wonderful to have three!”

Ruffed lemur mothers are unique in that they keep their infants in nests. In fact, they are the only nest-building diurnal primates in the world! As Halley’s due date approached, her caretakers provided shallow boxes with sides where she could choose to give birth, as well as small squares of fleece, pine boughs, and other materials Halley could use to construct a nest. Ultimately Halley chose a quiet corner and a soft towel on which to give birth.

Later, as the triplets grew and began moving around more on their own, Halley relocated them to a box with sides – “sort of like a playpen,” says Melanie – to keep them from wandering off.

Halley is an experienced and attentive mother, and her infants are thriving. “But she’s very serious about her mommy time,” laughs Melanie. “She won’t nurse just one of them at a time; either all three nurse, or nobody nurses. When she’s trying to have a moment alone and one of them comes up trying to nurse, she just gets up and leaves.

“I’ve also seen them try a time or two to hang from mom’s tail, and that’s not allowed. She’s not into that.” 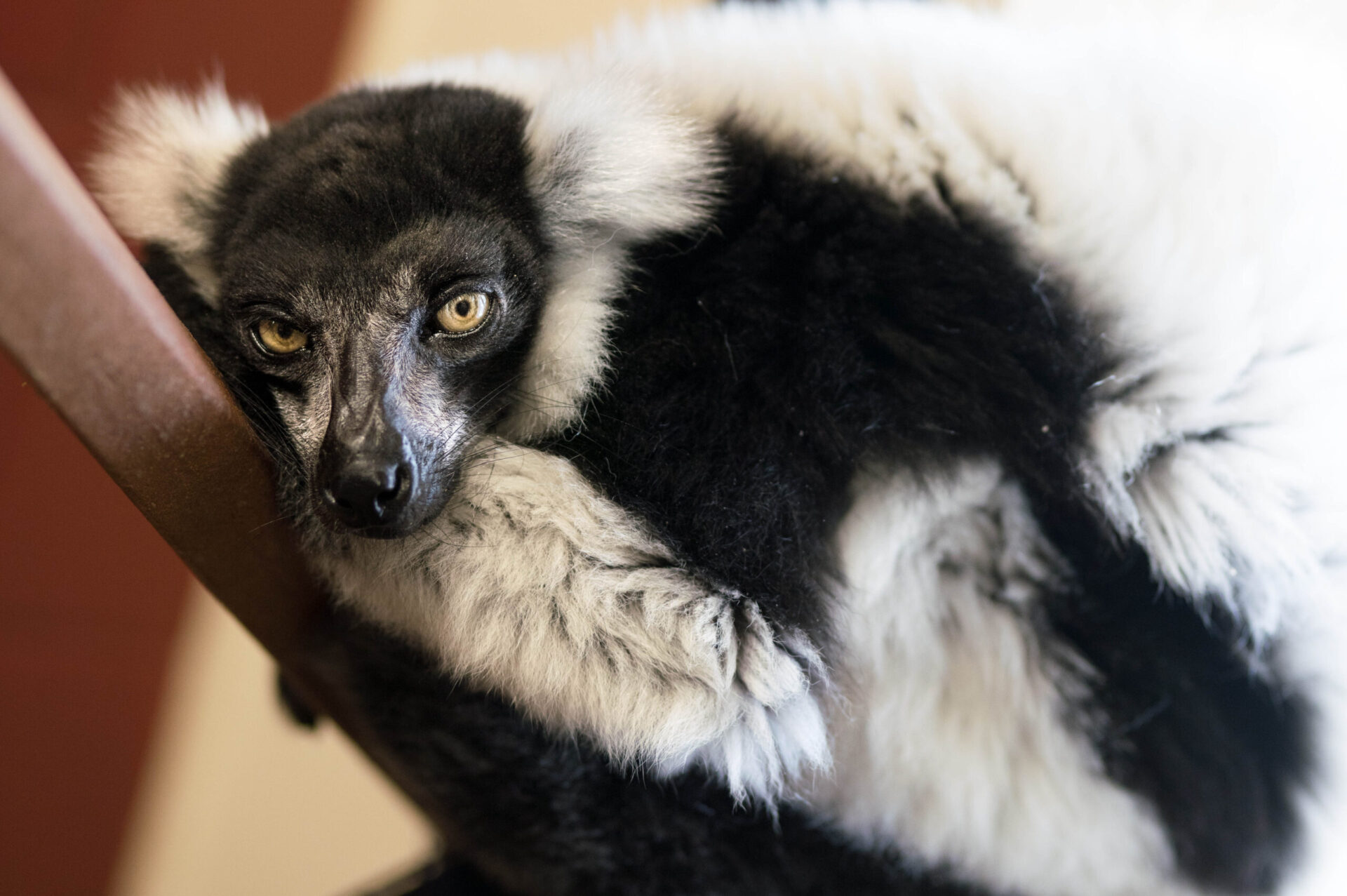 Dad Ravo keeps an eye on his infants while Halley enjoys some alone time in the next room. “He’s so great with them,” says Melanie. “The infants can get everywhere, and they’ve very curious and playful. They like to jump on top of Ravo and pull on his ears. They’ll try to incite play with him, and he’ll hold them and start grooming their faces and grooming their ears.” Photo by Sara Clark. 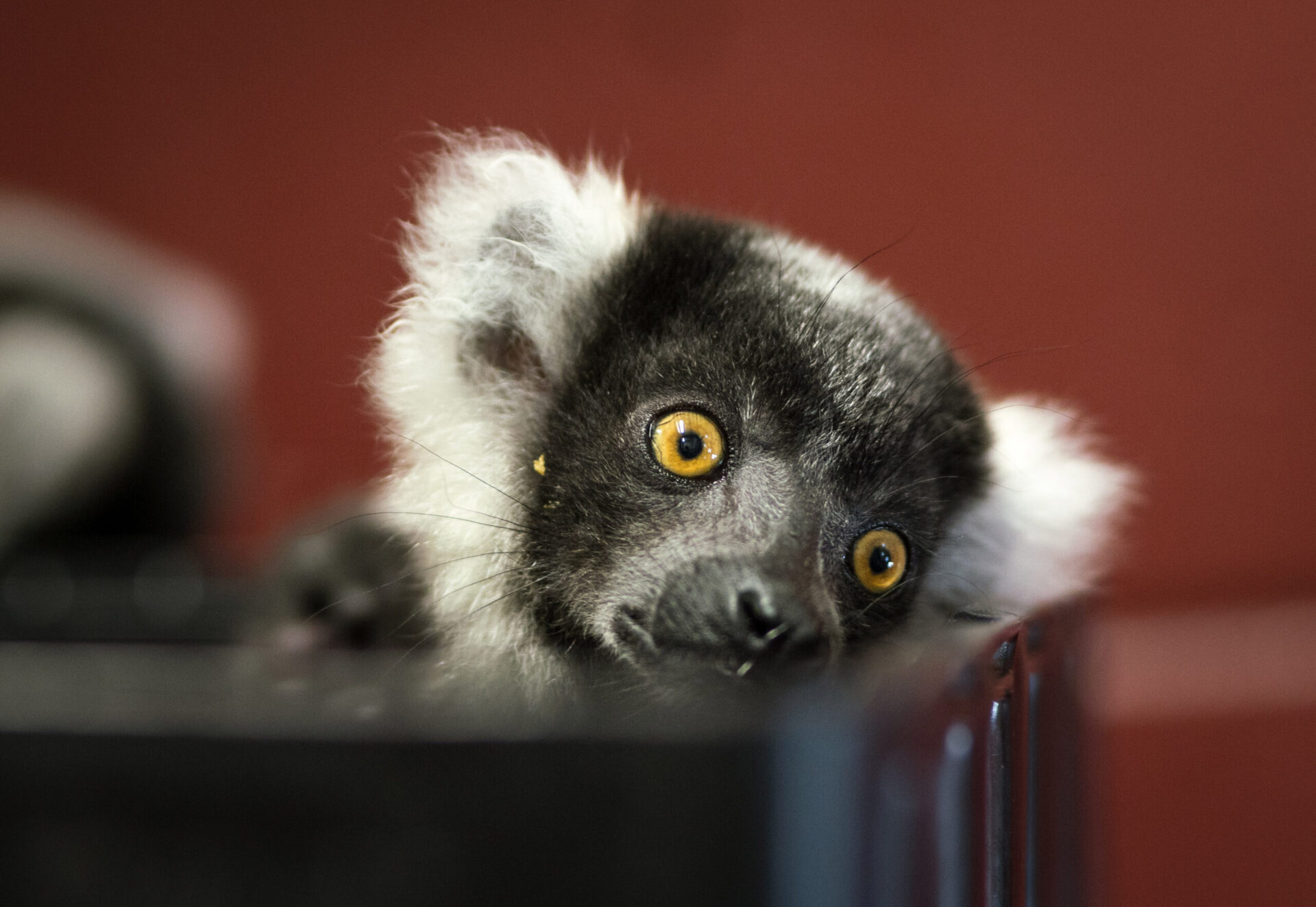 Black and white ruffed lemurs at the DLC are commonly given celestial-themed names. The largest baby, Melanie says, was a roly-poly boy. “I thought ‘Orbit’ was a fun name for a big, plump baby.” Photo by Sara Clark.

In the wild, black and white ruffed are classified as Critically Endangered, a term applied to species when the International Union for Conservation of Nature (IUCN) considers them to have a very high risk of becoming extinct. Habitat degradation — such as slash-and-burn agriculture, logging, and mining — are the main threats towards the species’ survival.

In this way, lemurs at the DLC and other accredited institutions around the world form a genetic safety net for their species. A healthy, genetically diverse remnant population of ruffed lemurs at the Lemur Center ensures that, even if these lemurs go extinct in the wild, they will continue to survive – and thrive – at the DLC. They will not be lost forever. 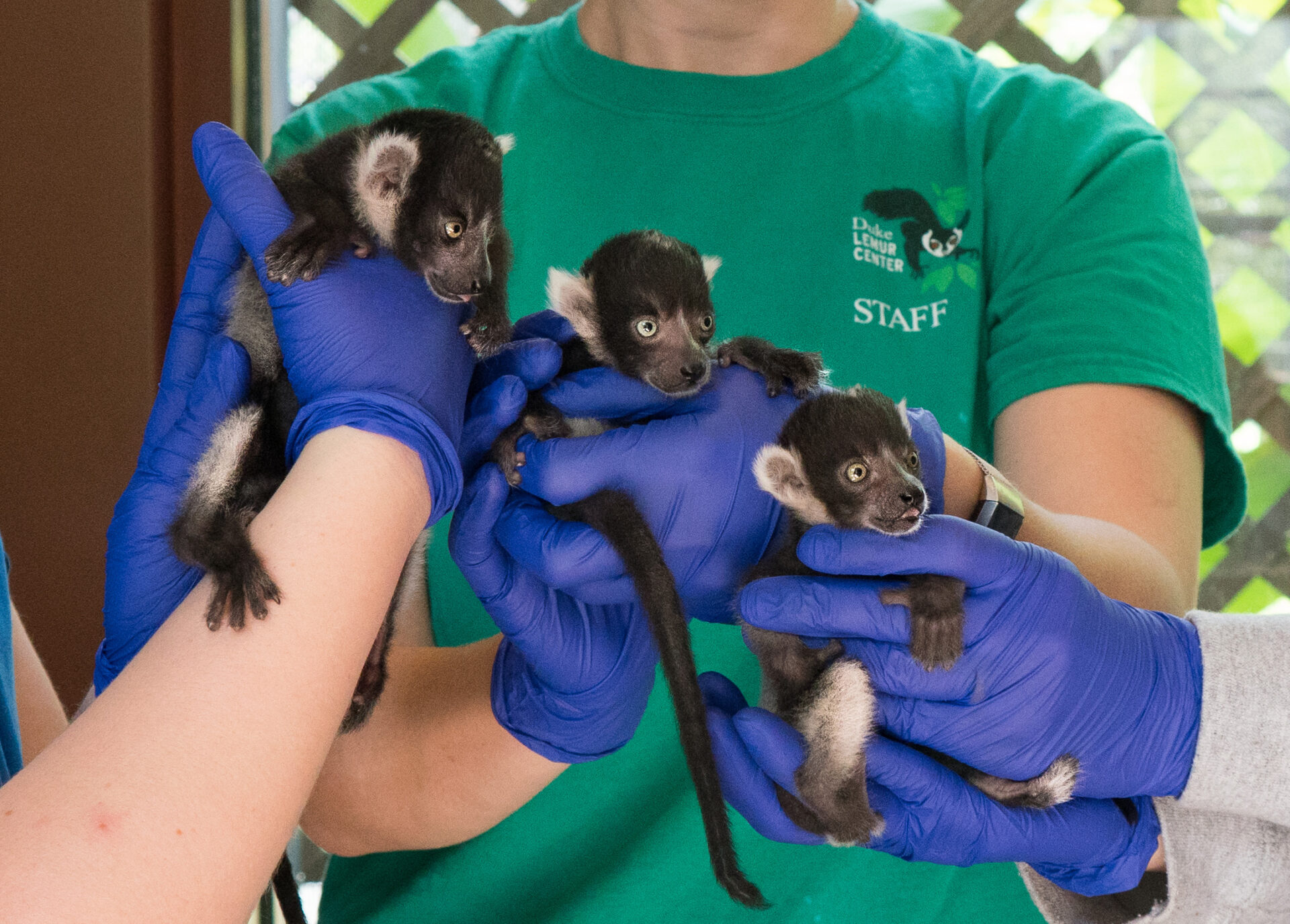 The young triplets at one of their first routine weigh-ins on May 6, 2020. Ruffed lemurs are the only diurnal primate whose infants don’t cling; instead, a ruffed lemur mom will carry her babies in her mouth. “Whereas a momma cat would pick up kittens behind the neck,” Melanie explains, “a ruffed lemur mom puts her mouth around the belly of the baby, and the baby wraps its hands and feet around her face.” Photo by Sara Clark.

How you can help ruffed lemurs

Adopt Halley! If you want to learn more about ruffed lemurs AND help support their care and conservation, please consider symbolically adopting Halley through the DLC’s Adopt a Lemur Program! Your adoption goes toward the $8,400 per year cost it takes to care for each lemur at the DLC, as well as aiding our conservation efforts in Madagascar. You’ll also receive quarterly updates and photos about Halley and her infants, making this a fun, educational gift that keeps giving all year long! Adoption packages start at just $50. Please visit our Adopt a Lemur homepage to learn more.

Send a “baby shower” gift: Make a ruffed lemur’s day by sending a special gift in the triplets’ honor via the DLC’s amazon.com wishlist!

Contribute to the triplets’ “scholarship fund”: Did you know it costs $8,400 per year to care for one lemur at the DLC — hence $25,200 to care for Halley’s triplets for just one year? We rely upon donations from individuals like you, who personally invest in our work to care for lemurs and protect their habitat in Madagascar. To learn more about the DLC’s “return on investment,” please see our 2019 stewardship booklet. A heartfelt THANK YOU for your support — we couldn’t do this work without you! 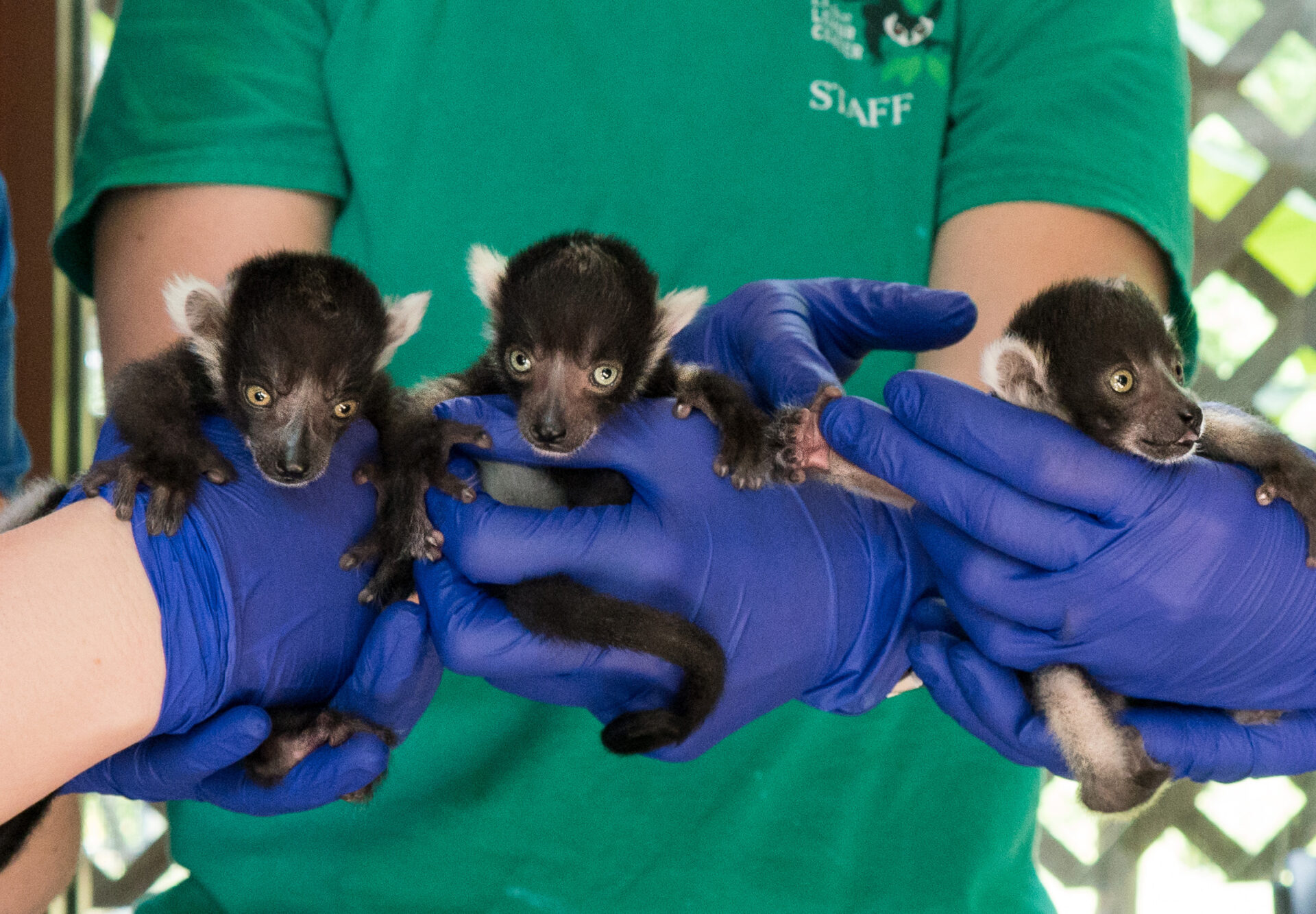 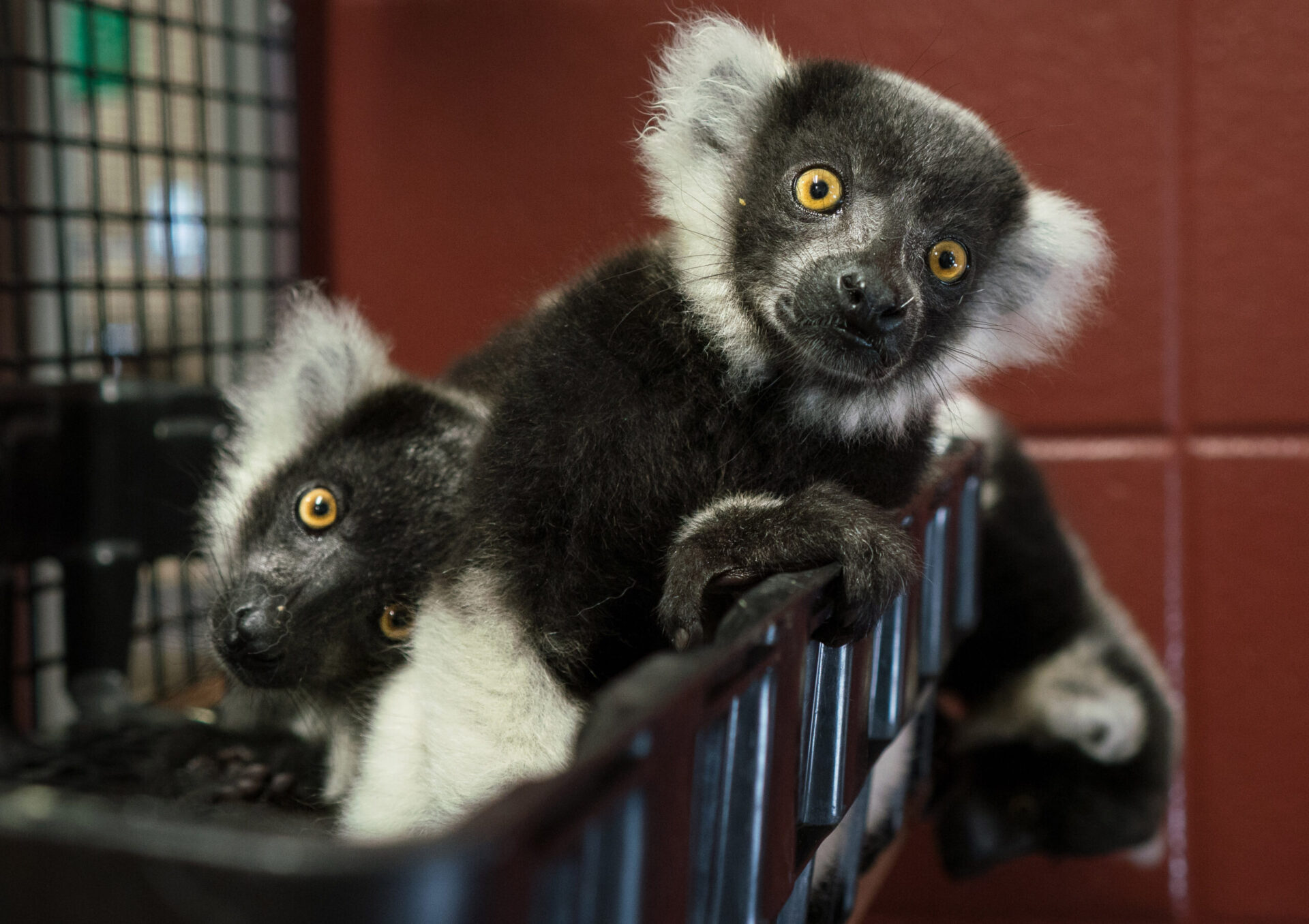