At the Duke Lemur Center, an innovative plan to keep the animals social late in life: pair them with lemurs of another species.

By Sabrina Imbler. Originally published in the New York Times on February 14, 2021. 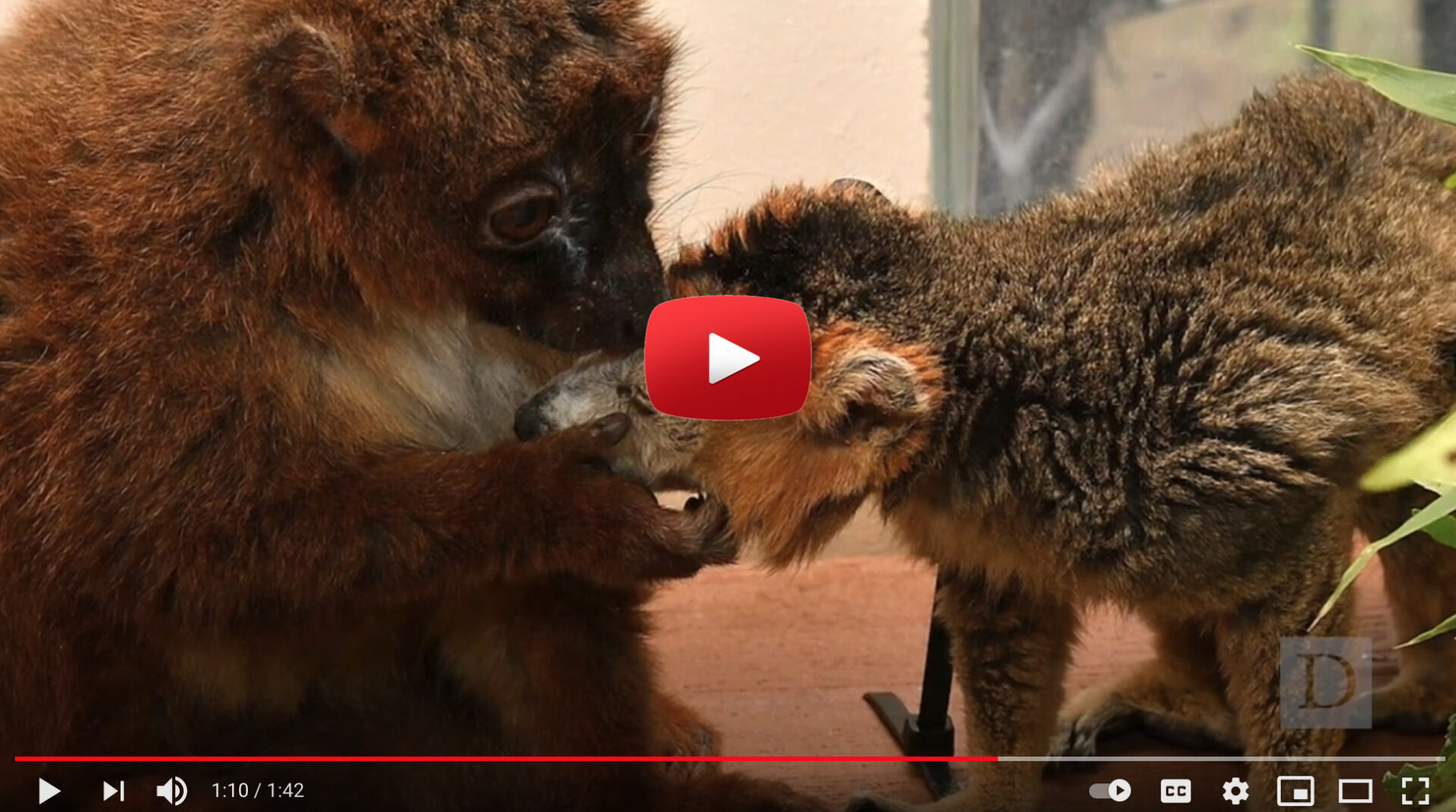 Over the course of her 32 years, Cheyenne the red-bellied lemur has had many soul mates. Her first was a mate in the traditional sense, a male red-bellied lemur who lived monogamously with Cheyenne for many years at the Duke Lemur Center in Durham, N.C. When he died, the elderly Cheyenne moved on to Geb, a geriatric crowned lemur; his young mate, Aria, had recently left him for a an even younger lemur. Cheyenne and Geb shared several years of peaceful, platonic companionship until Geb died in 2018 at the venerable age of 26.

Cheyenne now lives with Chloris, a 32-year-old ring-tailed lemur who has full cataracts in one eye and arthritis in her tail. The two spend their days as many couples do, elderly or not: sleeping, hanging out, grooming each other and cuddling.

“Right now Chloris and Cheyenne are snuggled up like a yin-yang symbol,” Britt Keith, the head lemur keeper, said on a call from the D wing of the center, which houses many of the center’s geriatric lemurs.

The goal of Cheyenne and Chloris’s pairing is not for them to breed; the lemurs are both post-reproductive females. Rather, it is companionship, the comfort of having someone to spend your twilight days with and a soft body to snuggle up to at night — and, in Cheyenne and Chloris’s case, also during the day. “They sleep a lot,” Ms. Keith said.

Left: Cheyenne, a red-bellied lemur, and Geb, a crowned lemur, in 2018. Right: Fiery, a red-fronted lemur, and Frigga, a common brown lemur. Photos by David Haring.

In the wild, lemurs generally do not want for company. Red-bellied lemurs form extremely tight, long-term bonds with their mates, and pairs rarely stray more than than three dozen feet apart, according to Stacey Tecot, a lemur primatologist at the University of Arizona. Crowned lemurs like Geb and ring-tailed lemurs like Chloris are not monogamous but have rich social lives, said Nicholas Grebe, a postdoctoral researcher who studies lemur behavior at Duke University and who knows Cheyenne and Chloris.

Lemurs in captivity live much longer than lemurs in the wild, and captive breeding populations often present a paucity of potential mates from the same species. Cheyenne is the last surviving red-bellied lemur from a former breeding population at the center, and virtually no lemurs of her species in the United States were available to be her mate, according to Ms. Keith.

But the staff at the Duke Lemur Center has a clear mission for all of the geriatric lemurs. “Our goal is that no lemurs live alone,” Ms. Keith said. “It’s totally unnatural and not good for their well-being.” So keepers have to get creative and play matchmaker to find suitable company for their elderly wards.

When lemurs grow old, their movements become slower and stiffer. They wobble on branches they could once grip with ease. Sometimes their tooth comb, a group of teeth used for grooming, falls out, which makes it harder for them to keep their fur fluffy on their own. So the best companion for a geriatric lemur is another geriatric lemur, someone who does not want to tumble around but is content to sit together and assist in grooming. “Young ones can be too rambunctious,” Dr. Grebe said.

To her credit, Cheyenne never settles for just any geriatric lemur. A while back, the keepers tried to introduce Martine, a female collared lemur, to Chloris and Cheyenne. Chloris didn’t mind — a cordiality perhaps aided by her cataracts. “She doesn’t care what anything looks like,” Ms. Keith said. But Cheyenne showed her teeth, stared down the new lemur and eventually chased her off. Ms. Keith said that Cheyenne could be bossy but that Martine was notoriously fractious: “She was not putting out the right vibes for Cheyenne.”

Still, Cheyenne and Chloris are open to elderly singletons joining their enclosure in the D wing. Until a few months ago, the lemurs were cohabiting with Pedro, a very old mongoose lemur who loved kiwis, until he died.

Wild lemur populations are often sympatric, meaning they live in the same geographic area. But scientists have only rarely observed different species interacting with each other, according to Dr. Tecot. One 2006 study found that crowned lemurs and Sanford’s lemurs in Madagascar formed a polyspecific association, communicating and coordinating their activities over time. Pairing between lemurs of different species seems even rarer, if it happens at all. Dr. Tecot, who co-directs the Ranomafana Red-Bellied Lemur Project in Madagascar, has never seen any mixed-species pairings in the wild.

In captivity, these pairings can offer insights into how lemurs may form interspecies companionships, according to Ipek Kulahci, a postdoctoral researcher at the University of Notre Dame.

Cheyenne and Chloris, who will both turn 33 this April, do not have the energy to play anymore. But they still soak in the sun in their outdoor enclosure and stay warm in their sleeping baskets, which are padded with fleece blankets to cushion their old bones.

In recent years, Chloris has been having more forgetful episodes in which she seems unaware of where she is — her keepers call them “senior moments,” Ms. Keith said. But when Chloris returns to lucidity, in her good eye, she sees she is still with Cheyenne.