Agriculture, socioeconomics, and food security in the SAVA

What are the links among agriculture, socioeconomics, and food security in the SAVA region of Madagascar?

Food insecurity, malnutrition, and deforestation are global challenges facing low-and middle-income countries, particularly in the tropics. In 2017, more than 800 million people were undernourished, 1/3 of whom were from sub-Saharan Africa (UNDP, 2020). In Madagascar, about 40% of women are anemic and 50% of children are malnourished (FAO, 2020). These health disparities are putting added pressure on vulnerable populations. Farmers face food insecurity for many reasons. Crop yields are declining due to declining soil fertility, extreme weather events such as cyclones, droughts, and floods that ruin crops. Climate change, especially drought and unpredictable rains, is making traditional methods and planting schedules less productive. Farmers generally depend on four main food crops: rice, maize, banana, and cassava. Based on research in rural villages in the SAVA region, crops such as beans and vegetables are rarely grown and are only consumed seasonally when there is excess money to buy them in the markets. Interviews with more than 350 people in three villages indicated that food security is a challenge in this region. Between 68-77% of respondents reported periods in the past three years when there was not enough food, and 53-65% stated that food insecurity is due to the small size of arable land. Food insecurity was negatively related to agricultural productivity; farmers who grew more rice and more vanilla had a lower probability of reporting food insecurity. To increase food security, it is necessary to increase agricultural sustainability and productivity.

Solutions to these problems require interdisciplinary research and development to create positive change. We are conducting a study on health, agricultural practices, and socio-economics, coupled with interventions to teach regenerative agriculture and nutritional skills. Our research focuses on the intersection of health, agriculture, and conservation. 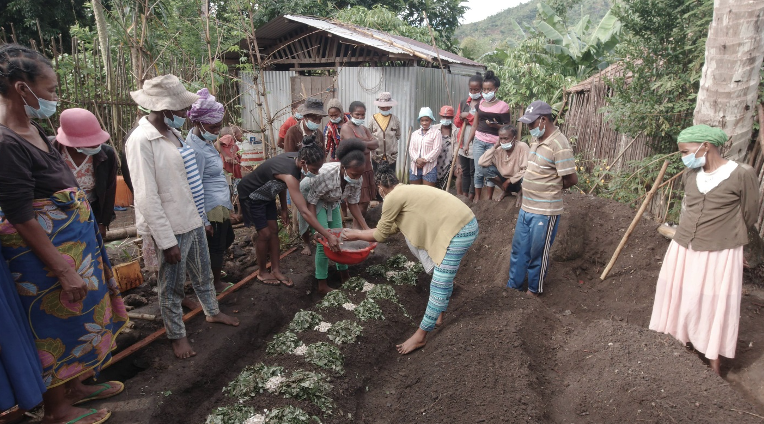 Emilien leads a workshop on vegetable gardening, here demonstrating the design of beds that are amended with locally-made compost to improve soil fertility. 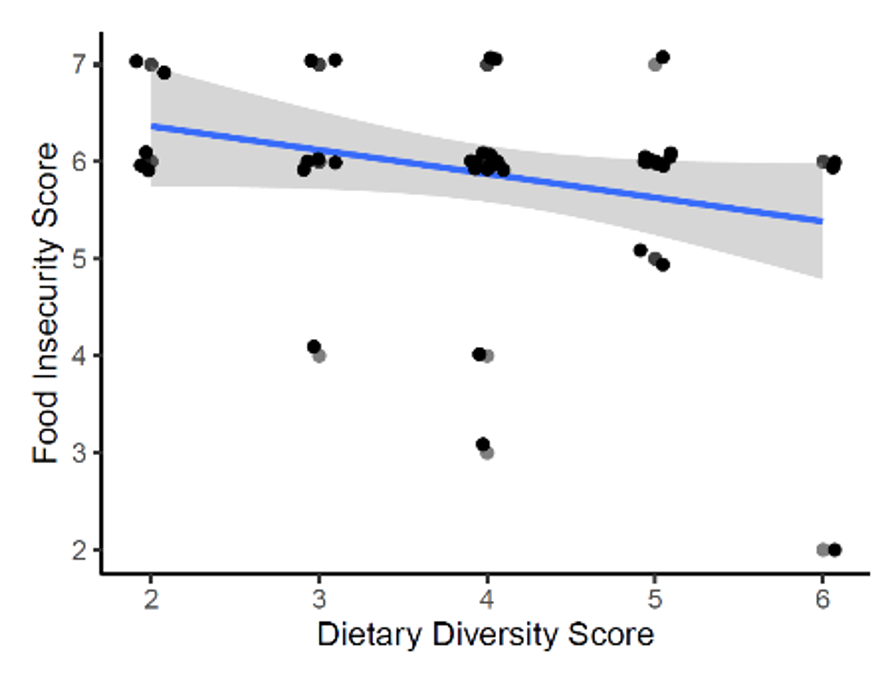 Figure 1. The correlation between dietary diversity, the explanatory variable, and the Food Insecurity Experience Score (FIES), the dependent variable. Points are jittered with a width of 0.1 unit on the axes to visualize overlapping points.

Between 2019-2021, 10 workshops have been conducted, serving over 217 farmers, students, and other trainees. Using follow-up evaluation surveys, we have been able to monitor the progress of 79% of participants. Of these 172 participants with whom we made follow-up evaluations, 40% are adopting the new techniques they learned in the workshops. Among the early adopters, 62% (43) are women. The technique most commonly implemented among these early adopters was amending soils by breaking up the deep compaction and adding organic, compostable material (97%). Intercropping with multiple species in the same space was common (41%), with a median crop diversity of two, and a maximum of 10. The most commonly grown crops are illustrated in Figure 3. Importantly, almost half of early adopters (49%) implemented techniques to irrigate with rainwater runoff such as canals, pocket ponds, and rain gardens (49%).

Techniques less commonly adopted include making compost (13%), using mulch to keep the soil covered (29%), and creating a living fence/hedgerow around their gardens or fields (23%). Half of the participants already harvested their first crops and rotated crops according to the season. Among early adopters, 75% are already satisfied with their results, and 12 participants have already gone on to teach others these techniques, confirming the desired “cascade effect” of knowledge dissemination. 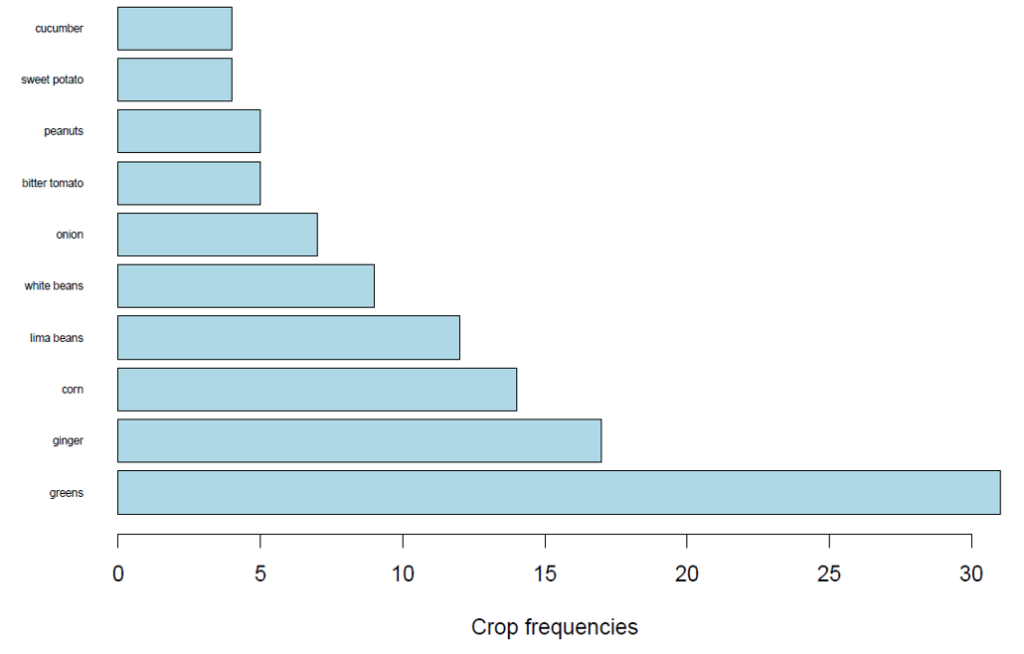 Figure 2. Frequency of most common crops grown. Greens are grown the most, followed by ginger and corn.

Among the 60% of participants that we have monitored but who have not adopted new techniques, the most common reasons included sickness (15%), inadequate rainfall/drought conditions (13%), moving away (13%), requiring more training (13%), occupation with other work (10%), and inadequate access to land (8%). We are addressing some of these issues by reinforcing the need to use rainwater capturing techniques to maximize runoff, even during dry periods. We emphasize that these techniques are ideal for small spaces, and even a small home garden that is easy to create and not time-consuming can produce diverse crops. Training they seek in the future includes poultry husbandry (68%) and advanced techniques in vanilla agriculture (16%). During nutrition-centered portions of workshops, 110 women have received hands-on skills development training in diversified diets for balanced nutrition. Women reported interest and satisfaction, and that with improved knowledge and access to vegetables via gardens, they can produce foods for a more diverse diet. 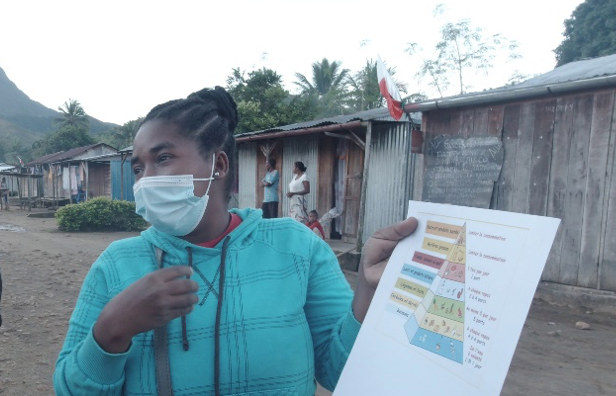 Lead author Nestorine leads workshops about balanced, healthy diets, especially focused on including diverse food groups and fruits and vegetables of many colors.

The links among land use, farming practices, food security, and nutritional health are clearly important, especially for smallholder farmers living on the forest frontier. Around the world, we see farmers facing challenges of food insecurity, malnutrition, and poverty, largely due to feedbacks with farming practices that quickly erode soil quality. To break this feedback loop, farmers need new and improved methods to regenerate soils, diversify crops and diets, and improve nutritional health. The results showed that a significant proportion of respondents reported severe food insecurity, with families reporting not having enough food to eat during a whole day. Coupled with this severe food insecurity, household dietary diversity is below the minimum suggested for adequate micronutrient intake. This combination of factors indicates that even in the SAVA region of Madagascar, food security and malnutrition are important issues affecting public health and wellness. The rate of food insecurity was high compared to a broad survey of African nations. Similarly, the low dietary diversity is commonly seen in other low-income countries such as in Africa. It is clear that there are significant issues in these communities that prevent them from reaching the UN Sustainable Development Goals.

The next steps for this research are to continue collecting data from a larger sample of households in each of at least six communities. In addition, we will implement measures of malnutrition to establish links with the other predictor variables, such as food insecurity, dietary diversity, and agricultural productivity. This will significantly increase the impact of our results from a public health perspective. We are also continuing to train farmers in improved agricultural techniques, and next will teach more advanced workshops on best practices of regenerative agriculture applied to vanilla farming. By intercropping lucrative cash crops like vanilla with important health-promoting vegetable crops, we are promoting a diversified and integrated approach to regenerative agriculture. We are also continuing to train women in diversified diets, and promoting high-quality fruits, vegetables, and pulses as staples. This work is part of the dissertation research for the two lead authors in preparation for their PhDs.

We are grateful to the Malagasy government for granting permission to conduct this research and the Malagasy Institute for the Conservation of Tropical Ecosystems for logistical support. We thank Lanto Andrianandrasana and Christophe Manjaribe for assistance in logistics. We are enormously appreciative of the financial support from a grant from the General Mills and Triangle Center for Evolutionary Medicine, and we are excited to acknowledge the recent award from the McQuade Foundation to further develop our training with women.

If you want to support Malagasy scientists at the forefront of research and development in Madagascar, consider making a tax-deductible gift to the DLC Madagascar Programs, and your donation will go directly to facilitating their work.