Conserving vital links in the habitat of lemurs, northeast Madagascar

Lemurs are the famous primates of Madagascar. Unlike monkeys and other primates, lemurs are found in the wild only on the island of Madagascar. They probably arrived on Madagascar from ancient primate ancestors on Africa 60 million years ago, and since that time, over 100 species have evolved. They can be found in almost all the natural environments of Madagascar: eastern rainforests, western dry forests, high mountains, and even in the spiny desert.

Despite this seeming flexibility, most lemurs are quite specialized in the habitats they prefer. Those habitats are disappearing at an alarming rate due to human activities, with almost half of the forest lost between 1950 and 2018. Lemurs are also hunted, sometimes for local subsistence, but often to sell the meat to hotels and restaurants in the city that serve exotic meat dishes. Because of these and other threats, 90% of lemur species are threatened with extinction.

In August and September of 2020, a team of Malagasy scientists searched the remote rainforests of the northeast region for the rare and threatened silky sifaka, Propithecus candidus. This species, and 21 others, are Critically Endangered, meaning they are at a high likelihood of going extinct in the next 100 years without intervention. The primary reasons are loss of habitat due to deforestation and hunting.

For one month, more than 30 Malagasy scientists, conservationists, and forest managers surveyed over 70,000 acres of remote rainforests in a protected area known as the COMATSA (Corridor Marojejy Anjanaharibe-Sud Tsaratanana). This stretch of forest connects three different parks and reserves, making it an important link for dispersal and gene flow. The World Wildlife Fund (WWF) manages the site in collaboration with local forest managers, and commissioned the local university scientists from CURSA to monitor the lemur populations. 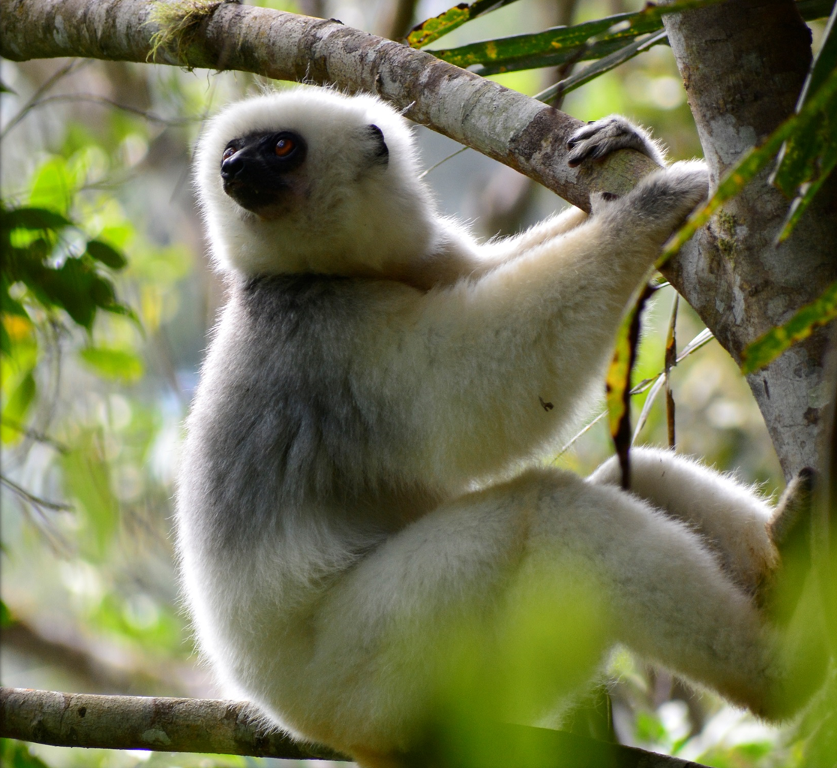 The silky sifaka, Propithecus candidus, is the focus of ongoing lemur-monitoring research. These lemurs are Critically Endangered due to logging, clearing forest for agriculture, and hunting. Teams of Malagasy scientists and forest managers will lead a campaign over the next four months to monitor lemurs and to develop sustainability projects with communities. Photo by Laura De Ara.

During surveys on over 100km of transects, the team observed nine different species of lemurs, with a total of 68 records. The elusive silky sifaka was only observed at three of the nine survey locations, and five times in total. Traces of their presence, such as scat and characteristic bite marks on trees, were found at four other sites, suggesting they may be present but further research is needed.

The team recorded new observations of an unusual species for the region: the common brown lemur (Eulemur fulvus). This species is known from sites over 100km further north and west of the COMATSA. It is also found in the same location (sympatric) with a closely related species, the white-fronted brown lemur (Eulemur albifrons). This is significant because it raises questions about how two species can co-exist when they are so similar in ecology and behavior. Do they compete for resources? Can they mate and form hybrids? These questions and more will be the focus of follow-up research by CURSA scientists.

Two closely related species of brown lemurs, or Eulemur, were found in the same locations. On the left, the white-fronted brown lemur (E. albifrons), in which males have white hair on their heads. On the right, the common brown lemur (E. fulvus), in which males have black hair on their heads. The presence of both species in the same locations raises interesting questions about ecology and evolution that will be the subject of research by Malagasy scientists. Photos by Laura de Ara (left) and James Herrera (right).

While the team surveyed for lemurs, they were also shocked at the frequency of observing new clearings cut in the forest. They found massive trees converted to planks and stacked in the forest ready to be carried out for sale. Sadly, the team found many snare traps set in the forest. When hunters set snare traps, they cut down all the trees in a parcel of the forest and use the logs to create a bridge that spans the space, on which they set snare traps, like a noose. Lemurs are arboreal – they climb in the trees – so they prefer to walk across the bridge than to cross on the ground. They walk across the log bridge right into snares. At one site alone, the team found and disarmed 37 snares. Some snares had dead lemurs still hanging, several days old. You can read more about the study, and the action plans that have resulted from it, in our December 2020 Newsletter.

To address these direct threats to lemur viability, CURSA scientists and the Duke Lemur Center are partnering with WWF to return to these sites. As of the writing of this piece (Dec 2020), the team will return to the site where they observed the most lemur snares. The goals are ecological surveys and information campaigns about hunting. The first objective is to collect more data on the rarest species like the silky sifaka, which are so difficult to detect. The second objective is to lead a participatory information campaign on natural resource management, and learn about the reasons people hunt lemurs, harvest trees, and clear forest. Modeled after the Sustainable Wildlife Management guidelines, as developed in near-by Makira Natural Park, we plan to co-create projects for sustainable natural resource management such that local populations can develop alternatives to hunting wildlife. DLC has 10 years of experience in the SAVA region leading workshops on aquaculture (fish farming), sustainable agriculture, and more. We will facilitate the local communities if they choose to transition to more sustainable practices. These projects and more will be the focus of upcoming missions throughout the COMATSA.

To achieve the goals of these projects six Malagasy graduate students will prepare Masters theses and PhD dissertations about the work. Ten forest managers from each of the local communities will also be engaged and have training opportunities. By empowering these local stakeholders, long-term conservation of forests and lemurs will be possible while also developing livelihoods for rural communities. We could not achieve these goals without the support of our grants and donations that make these projects possible.