Through training and partnership, our goal is to promote the ability of Malagasy people to wisely manage their country’s environmental resources.

The DLC-SAVA Conservation program uses a multidimensional and trans-disciplinary approach to conservation through community-based projects. To protect the forest and all its biodiversity, we aim to empower Malagasy people and organizations to be stewards and achieve their sustainability goals. Below is just a sample of some of our most recent activities. All of our projects are funded through grants and donations, so your support goes directly to helping people in Madagascar reach their sustainability goals. Please contact us for more information on how you can get involved and support our activities.

DLC-SAVA collaborates with the sole university in the SAVA, known as CURSA (Centre Universitaire Régional de la SAVA). With a department focused on environmental resource management, CURSA creates a vibrant and exciting opportunity for students to learn both environmental conservation and regenerative agriculture. CURSA students are engaged in DLC-SAVA research and development projects, and our staff supervise their independent research projects. DLC-SAVA also co-hosts workshops for CURSA students, including on scientific methods in the lab and in the forest. 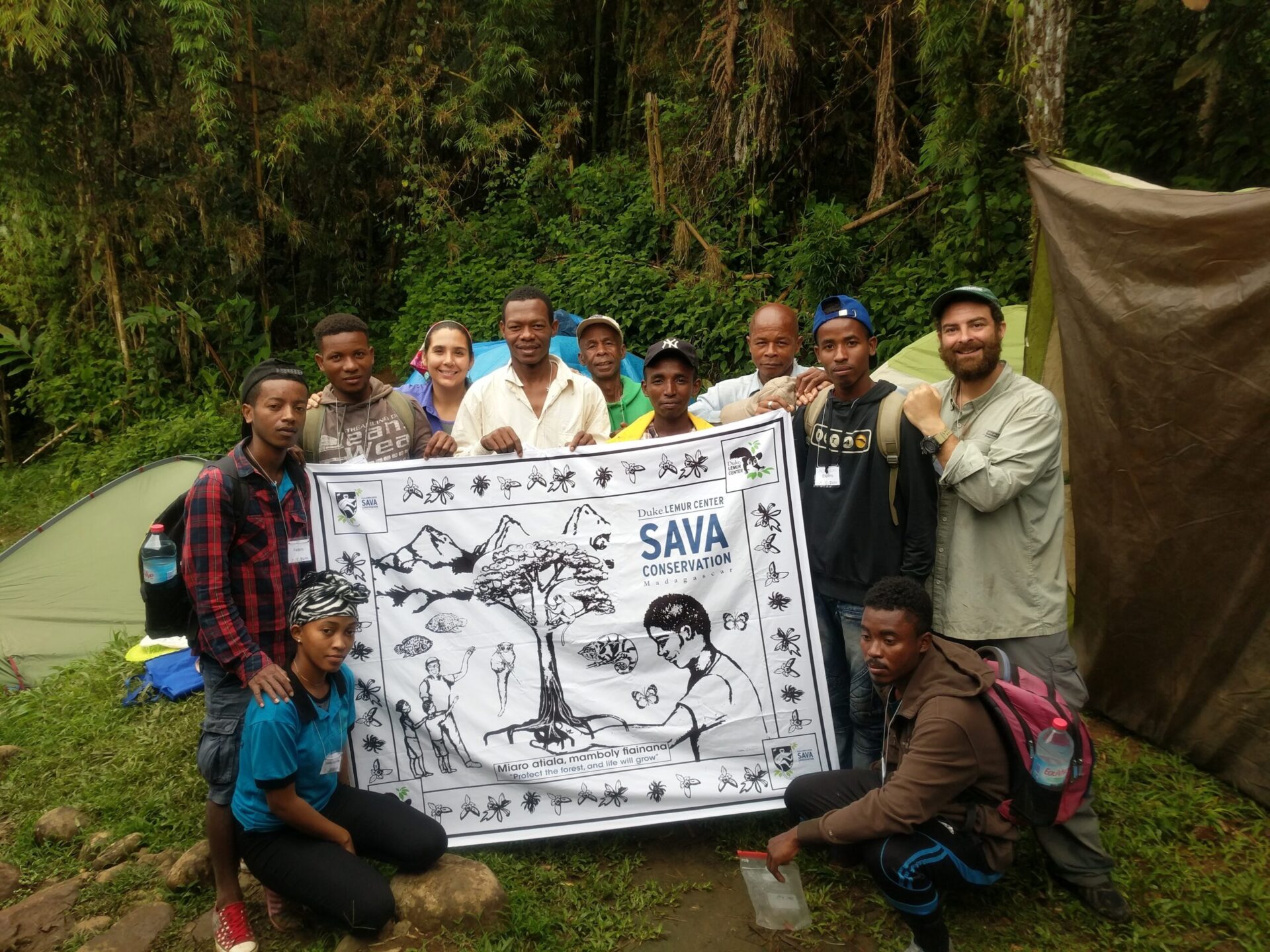 Students proudly commemorate their first trip to Marojejy during the CURSA workshop. 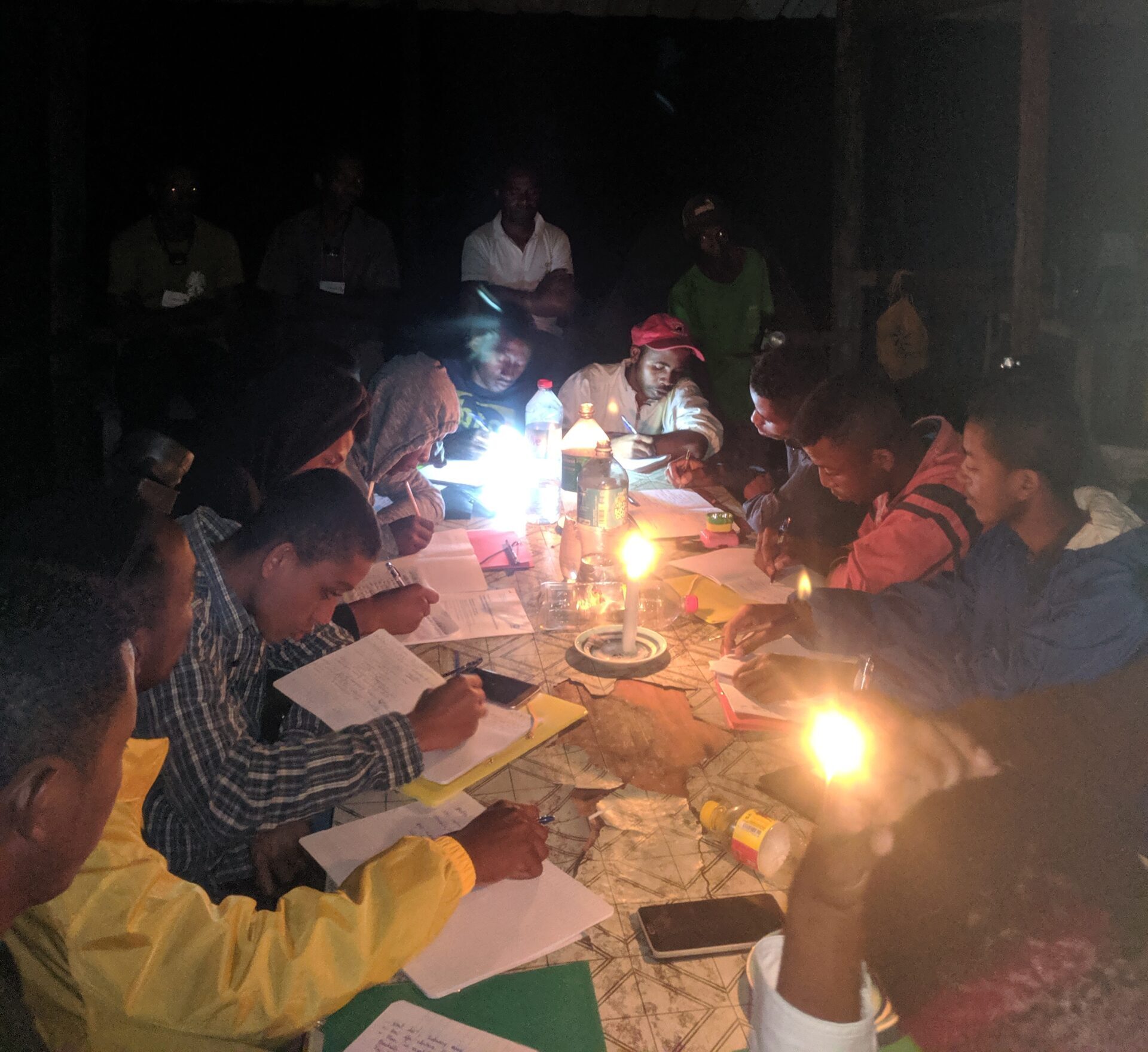 Studying about biodiversity and conservation by candlelight until late in the night.

It is important for Malagasy students to obtain higher education as they enter the fields of environmental resource management. Access to universities is limited in Madagascar, and DLC-SAVA offers graduates from CURSA scholarships to support master’s-level education. We currently support two CURSA graduates to pursue master’s degrees at the University of Antananarivo, and we would like to expand the scholarship program, which is supported entirely by donations from supporters like you! Consider donating today.  See the January 2020 DLC-SAVA newsletter for more details. 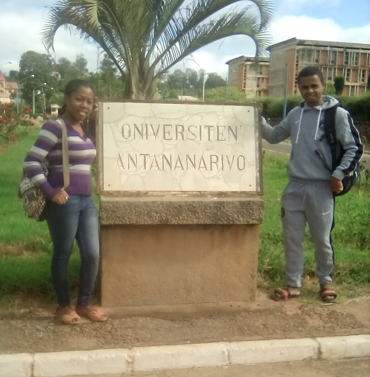 The DLC currently supports two CURSA graduates to pursue master’s degrees at the University of Antananarivo.

Most of the people living in the remote rural areas of SAVA have insufficient access to nutritious sources of protein. Thus, to meet their dietary needs, many turn to wild sources of meat (bush meat), including lemurs and tenrecs, endemic and threatened wildlife. To provide a reliable local protein source for local people, DLC-SAVA, in partnership with a local fish-farming specialist, has assisted villagers with installation of ten fish ponds for raising native Paratilapia. The goal of this project is to create a sustainable protein source that will decrease the consumption of bush meat, as well as to restore populations of native Paratilapia in the region. We are currently considering development of other protein sources, including improved poultry husbandry and harvesting edible insects. 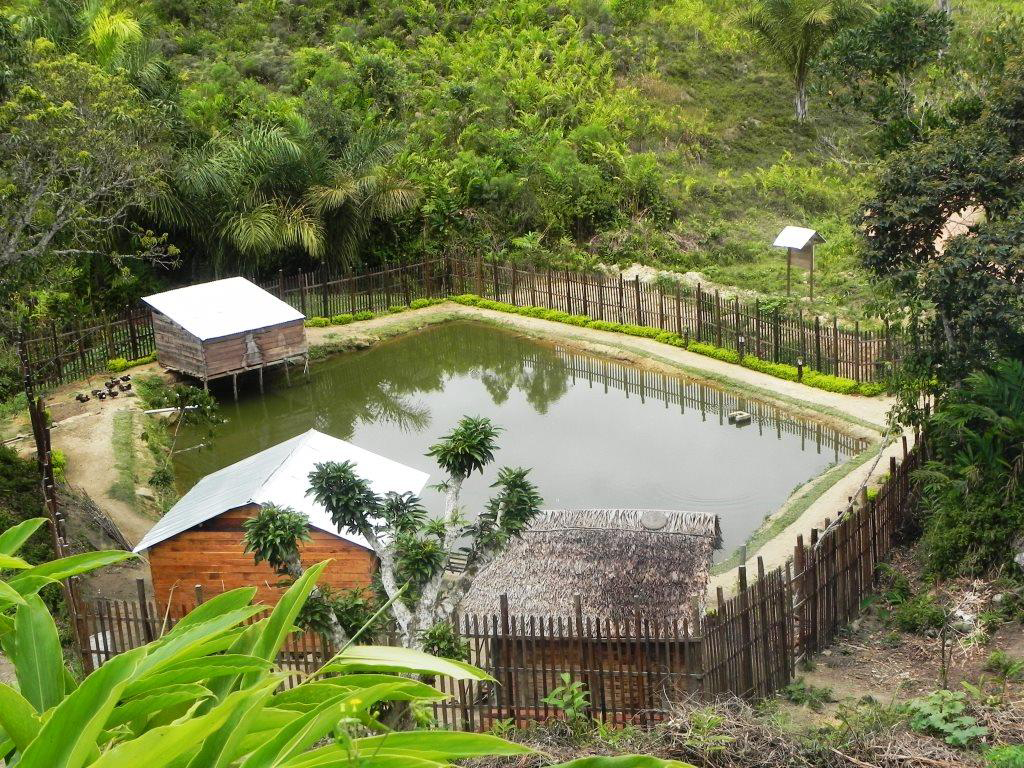 With DLC-SAVA support for the fish ponds, village associations agreed that 25 of the fish harvested would be released into rivers and streams.

Meals in Madagascar’s poorer communities are cooked over a traditional “three-stone” fire using charcoal produced from forest resources. As population rises, so does the demand for charcoal for cooking food, putting an increasing strain on dwindling forest cover. These open fires also contribute to respiratory health, especially among women and children working and cooking over the flames.

DLC-SAVA supports and organizes the distribution of high-quality fuel-efficient stoves, made by the Swiss NGO ADES. These clay stoves burn wood or charcoal and use 50% less fuel than traditional methods, based on research carried out by Duke University students and staff. The stoves also produce less smoke, which reduces air pollution in the home. DLC-SAVA purchases the stoves from the manufacturer in the capital, transports them to the SAVA region, and subsidizes the costs to promote their purchase and use. You can read more about the research on stove use in SAVA by DLC research scientists and the thesis done on stove efficiency and air pollution by Duke graduate Thomas Klug. 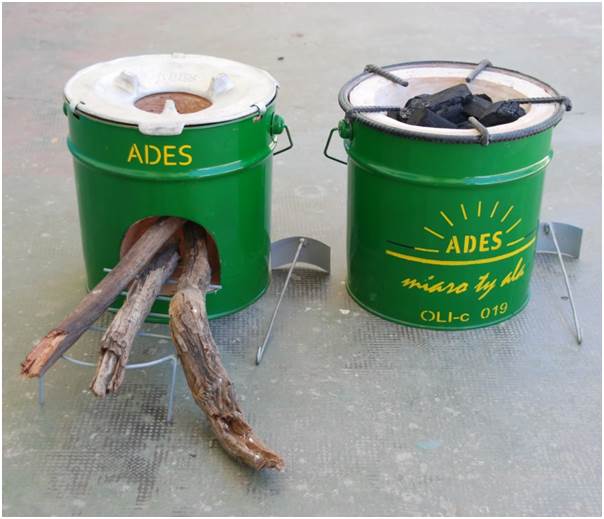 DLC-SAVA has provided over 1,000 stoves for families in the SAVA region.

It is critical that we do what we can to cooperate with and enable the Malagasy government in its effort to protect and manage the protected areas of the region. To that end, we have been working with MNP to support a “village guardian” program, which enlists local community members that live in villages along the periphery of parks. A first step for the program is equipping the new guards for outdoor work in the rainforests of Marojejy National Park. DLC-SAVA contributed 70 sturdy American-made raincoats and rubber boots for the village guardians.

DLC-SAVA also sponsored the demarcation of Marojejy National Park with signage. In an agreement with MNP, DLC SAVA Conservation supported reestablishing the boundary of Marojejy NP. With a grant from the IUCN Save Our Species program, DLC-SAVA provided MNP new signs to demarcate the park boundary. An unmistakable boundary is an important tool for Park protection – not only does it clearly demarcate the edge of the Park, but it shows active protection. 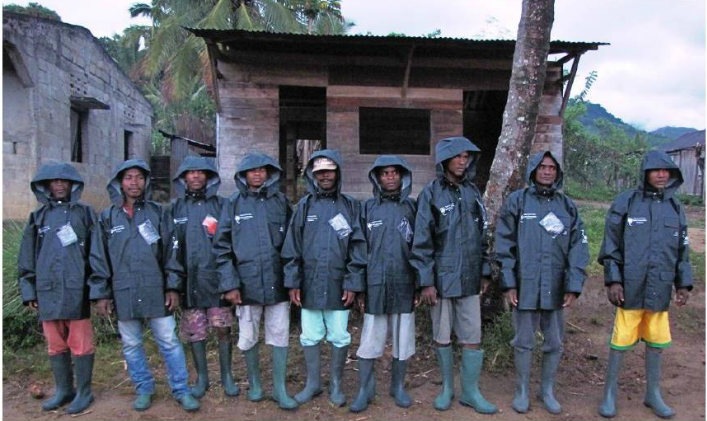 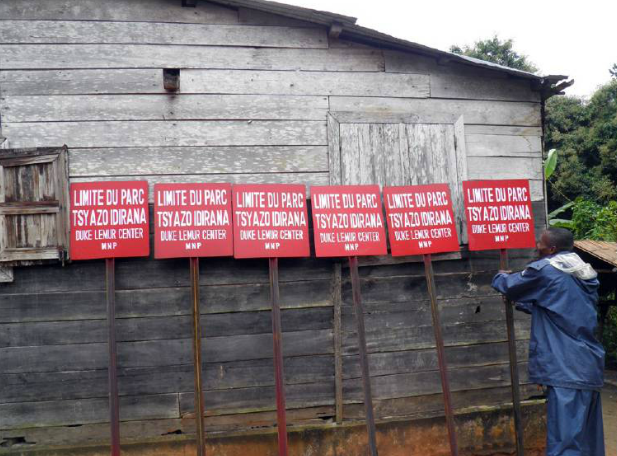 These signs were provided by DLC-SAVA to mark the boundary of Marojejy National Park. An unmistakable boundary is an important tool for Park protection – not only does it clearly demarcate the edge of the Park, but it shows active protection.

DLC-SAVA supports and carries out biodiversity research, including surveys in remote rainforests to document the diversity of species and to determine the conservation priorities in the region. We carry out this research in collaboration with other organizations, including the Malagasy research group Vahatra and Duke University scientists. We use research as an opportunity to engage and train Malagasy students from CURSA and the University of Antananarivo in the capital. Read more about our research here.

Malagasy researchers participate in field work to study the SAVA region’s unique and endangered lemurs, such as the fat-tailed dwarf lemur pictured here.

DLC-SAVA facilitates research and development projects by other Duke University departments that work in the SAVA, such as the Duke Global Health Institute, the Nicholas School of the Environment and the Pratt School of Engineering. By doing so, Duke researchers can provide important data for local entities. For example, the Duke Global Health Institute studies have shown that half of people in villages bordering the park have hypertension, and the results provide new information for the local Department of Health. Research collaborations are an excellent way for students to gain hands-on experience with real-world problems. 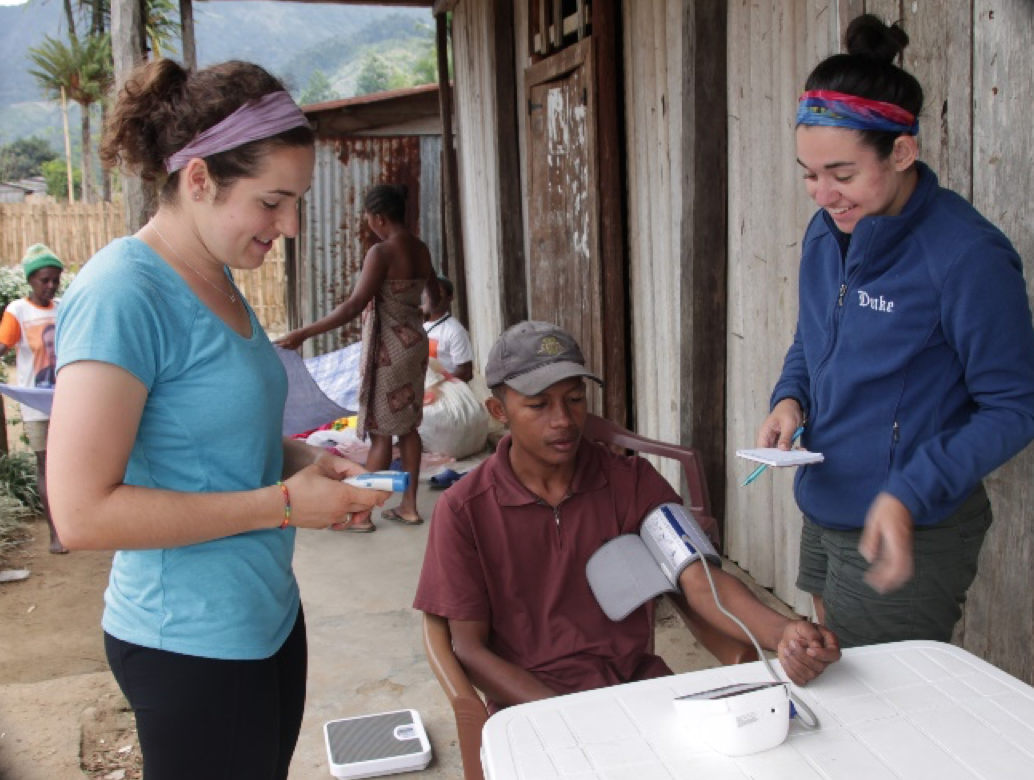 With Malagasy medical colleagues, Duke Global Health Institute students assist with research on villagers’ health, particularly as it relates to environmental factors such as the effects of land use practices on disease.

More information and photos of DLC-SAVA activities can be found in our newsletter archive.

Please make a contribution today to support SAVA Conservation. 100% of funds for the DLC’s Madagascar Conservation Programs come from donors and grants. Thank you!