Lemur Research Tales: A Day in the Life of Gisela’s Family

I planned to be in Madagascar for three months of summer 2020, volunteering and being trained in field methods to study lemurs. When the pandemic hit and it was no longer safe to travel, my program was cancelled. But I refused to let this reality dictate my life as a budding lemur researcher. Once the Lemur Center implemented strict COVID protocols to allow for the return of some of us, I sought an opportunity to assist Dr. Lydia Greene on her research project.

For the behavioral part of her nutrition research project, Lydia and I followed around adult, free-ranging lemur pairs and wrote down any feeding behavior they showed. Three days in a row per week from sunrise to sunset, we did lemur research in the Duke Forest. I’d come home exhausted, covered in sweat and mosquito bites, yet invigorated over the work we were doing. I hope to use this guest blog to give insight into the daily life of one of our lemur families at the Center to show others how cool it is to do lemur research! 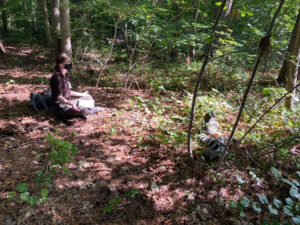 Me sitting with ring-tailed lemurs Stewart and Alena as they do their morning sunning.

Lydia and I arrive at the Duke Lemur Center at 7 AM, mask-clad. We get keys, radios, and field gear before heading out to Natural Habitat Enclosure (NHE) 2. The free ranging lemurs in NHE 2 are Sophia’s ring-tailed lemur family and Gisela’s Coquerel’s sifaka family. As they are social animals, lemurs live in family groups. This week I am assigned to follow Gisela’s family. 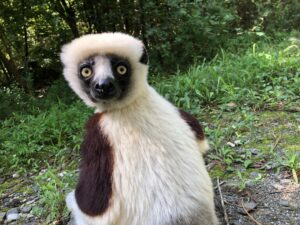 Locating animals early in the morning when they are sleeping presents a challenge– especially for arboreal primates like sifakas. They sleep high in the trees to be safe from predators. Animal researchers can use a technique called “radio telemetry” to locate animals. At least one lemur from every social grouping at the DLC has a radio transmitter collar, which we can use to locate them. The collar sends signals for the antenna of the receiver I’m holding to detect. The signals turn into a beeping noise, which we interpret based on frequency and volume. This is my first morning trying radio telemetry and, through trial-and error, I found Gisela’s family sleeping together high in the oak trees.

I stood under where they slept for 40 minutes before anyone woke up. The first to rise is independent three-year-old Furia, daughter of Gisela, leaving her family to forage nearby. The morning snack of choice for Gisela’s family in this season is acorns. They eat the nut of the acorn and then drop the shell to the forest floor. Soon, the whole family–mother Gisela, father Rupert, daughter Furia, and juvenile son Didius–are awake to snack. (Any sifaka born at the Lemur Center gets a Roman name!) Watching the sun rise to begin a beautiful day while seeing the sifaka family leap around high up, socializing and eating is hands-down my favorite thing I’ve done. 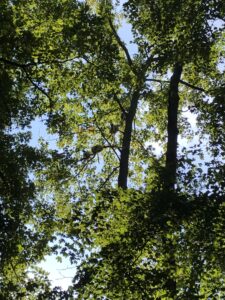 Gisela’s family snacks on acorns in the tree tops. Can you spot all four lemurs?

They ate acorns while also grooming each other for a whole hour. It’s amazing the amount of time you stand around as a researcher watching them do a certain behavior. But maybe it’s not so amazing to get caught in a hailing of acorn shells. After this activity, they were ready to move on to other trees to eat leaves and sit in the morning sun. This free-ranging family eats a large variety of wild leaves, such as maple, sweetgum,  silverberry, grapevine, and sumac. While Gisela and Furia seem the most dedicated foragers, Rupert and Didius follow them everywhere. Didius is around seven months old at this point and is weaning from his mother’s milk. He is never far from his mom, although she is gently teaching him to no longer nurse.

Gisela is one of the daughters of the late Zoboomafoo, with beautiful looks from both of her parents. She’s also a very dominant female, the clear matriarch. Sifakas are among lemur species to have female-dominant social groupings. This means that Gisela decides where the group goes and when. This also means that she gets the prime pickings of any available food, whether it is already taken or not. The keeper supplements the free-ranger’s diet daily to ensure they get the nutrition they need. At feeding time, Gisela can be seen taking food from her mate Rupert. Rupert lets out a submissive chatter and goes to find other foods.

Sifaka don’t have the defined meal times we humans do. They eat constantly throughout the day because that’s how their digestive systems work. So while the keeper comes at around 11 AM, they will “graze” upon the food and the leaves of the forest for the rest of the day. In today’s diets, there were peanuts (a sifaka favorite, usually the first thing eaten), kale, broccoli, carrots, tomatoes, and folivore (leaf-eater) chow.

Lydia and I take a lunch break after the lemurs have begun their post-breakfast nap. This is good timing because there probably won’t be any feeding behavior over the next two hours. It’s important as researchers to take a break, refresh and recharge so we can keep up with the lemurs and their behavior. Wouldn’t want to miss anything! I feel better about taking breaks for myself when I see my fellow non-human primates in the field resting all the time.

Gisela’s family rises from their afternoon nap to eat and socialize some more. Since Didius is a juvenile, all family members engage in play behaviors with him. Having known Furia at Didius’s age, I know Furia had a great example for playing with her older brother Hostilian. (Hostilian is now living with Euphemia, still at the Duke Lemur Center.) I even spotted Rupert occasionally playing with Didius in the trees. Social behaviors like play and grooming are so important for bonding in primates.

When the keeper arrives with supplemental leaves (today’s pick is sumac) at 3 PM, I know the day is close to done. Gisela and Furia engage in a tug-of-war over a delicious-looking sumac branch, chattering to one another. The established dominant female, Gisela, ends up victorious. Furia chatters some more and goes to get a different branch for herself. While Furia understands her mom gets the prime pick of things and may protest, Didius is still learning. Gisela is gentle but firm when Didius tries to share her snacks so that he will go get his own. After they’ve stripped the sumac branch of its leaves, sifaka delicately strip the bark from it to eat. This process is slow and thorough but a joy to watch. 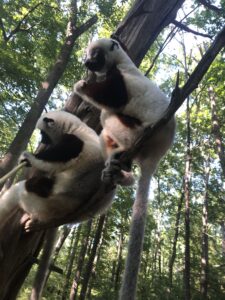 Gisela (left) stripping the bark of a sumac branch with Didius perched next to her.

By 5 PM, the sifaka family has taken everything it can from the sumac. It’s time to jump from tree to tree to end the day on a strong note: acorn foraging time again! Once again, acorns are raining down around me as I record this behavior. It’s been incredible to see Gisela’s family make such thorough use of their free-ranging forest habitat. I’ve been constantly on my feet and moving around. We ended up in a part of the NHE so unfamiliar to me that I was lost. This part deep in the forest is where the family goes to sleep some evenings. I had to message Lydia and work with her to figure out where I was and how to get back. It’s easy to forget that the Duke Lemur Center is on 85 acres of forest!

The free-ranging lemurs tend to go to sleep in the treetops just as the sun sets, and today that was around 7:30. I’m worn out and the mosquitoes are relentless despite all my repellant, but I know I’d get up and do it all over again without hesitation. I’ve gotten to know lemurs I hadn’t worked with in my 2017 summer internship. I’ve been actively gaining the skills I’ll need as an independent researcher when I go to graduate school. I’ve been assailed by acorns, bugs, and lemur poop. And I wouldn’t have it any other way!