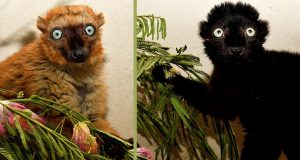 Velona and Mangamaso were born at Parc Ivoloina, a nonprofit nature center in eastern Madagascar. The Duke Lemur Center and Parc Ivoloina, managed by the Madagascar Fauna and Flora Group, have been partners since 1987.

DURHAM, N.C. — After three years of planning and 60 hours of travel, a new pair of lemurs have arrived at the Duke Lemur Center in North Carolina, 9,000 miles from their home in Madagascar.

The breeding pair will be used to improve the gene pool of captive members of the critically endangered species, blue-eyed black lemurs (Eulemur flavifrons).

The 5-year-old male Mangamaso and 3-year-old female Velona were relocated from Parc Ivoloina, a nonprofit nature center in eastern Madagascar where they and their parents were born into a conservation breeding program.

The transfer marks the first time lemurs have been imported from Madagascar to the United States in 24 years because of strict import and export regulations intended to protect the animals.

“The addition of two lemurs genetically unrelated to our current animals is a huge asset to our conservation breeding program,” said Andrea Katz, curator of animals at the Duke Lemur Center and primary organizer of the transfer. “The more genetic diversity we have, the better we can maintain our role as a safety net for this species.”

The blue-eyed black lemur (Eulemur flavifrons) has been named one of the world’s 25 most threatened primates, with possibly fewer than 1,000 individuals remaining in the wild, said Sara Clark, director of communications at the Duke Lemur Center.

In 2015, it was estimated that the species could go extinct in the wild in as little as 11 years.

Only three small populations of blue-eyed black lemurs exist in zoos and conservation facilities around the world: 12 animals in Madagascar, 34 in Europe and 28 in the U.S. Prior to the arrival of Mangamaso and Velona, every blue-eyed black lemur in North America descended from seven wild-born animals imported by the Duke Lemur Center in 1985 and 1990.

While the current captive population is healthy, transfers like this one are necessary to grow and sustain it, Katz said. Greater genetic diversity is linked to better health and immune responses and increased ability to adapt to environmental pressures — crucial factors in the fight to protect this species from extinction.

“The success of the transfer is the result of a unique international collaboration, three years in the making,” Katz said. “In my 40 years at the Lemur Center, this may have been the most difficult and rewarding thing I’ve ever done.”

The transfer culminated in a complex negotiation between the Government of Madagascar, Parc Ivoloina, the American Association of Zoos and Aquariums (AZA) Species Survival Program and the European AZA Endangered Species Program. As a part of the agreement, the Duke Lemur Center transferred two of its blue-eyed black lemurs to France to strengthen the European breeding program. Parc Ivoloina also received two blue-eyed black lemurs from other facilities in Madagascar to bolster their breeding program.

A Malagasy alumnus of Duke University’s Fuqua School of Business contributed the use of a private plane to transport the lemurs from Parc Ivoloina to Madagascar’s capital city of Antananarivo for the international flight, sparing the pair a 10-hour drive over bumpy roads.

Duke Lemur Center veterinarian Cathy Williams personally escorted the lemurs on their 60-hour journey from Madagascar to the U.S. They were kept in quarantine for two months to monitor their health and make sure they were disease-free before settling into their new home in Durham.

“These exchanges are absolutely critical to the genetic health of all lemurs, and the partnership and cooperation with other institutions that we enjoyed over this long process have been truly inspiring,” said Anne Yoder, director of the Duke Lemur Center. “It takes a global village to save lemurs, and we are grateful and proud to be part of that village.”

It costs $7,400 per year to feed, house, and care for each lemur at the Duke Lemur Center. Please consider making a donation or symbolically adopting a lemur today. Your gift at any level makes a difference!