Remembering a star: Jovian, lemur host of Zoboomafoo, passes away 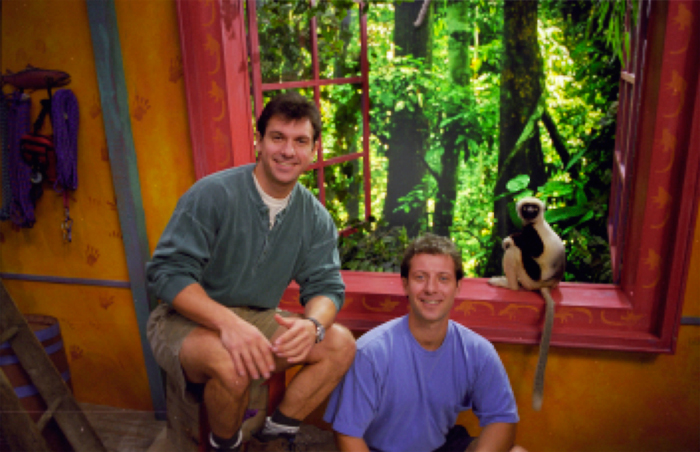 November, 11, 2014, Durham, NC — A quiet sadness spread over the Duke Lemur Center staff on Monday as news spread that Jovian, a much-loved Coquerel’s sifaka had died of kidney failure at the age of 20.5 years.

Within the Lemur Center, Jovian was known as an exceptionally capable and caring father, having sired 12 sifakas by two different partners, leading to four grand-babies, with two more on the way.

Outside the Lemur Center, Jovian was famous as “Zoboomafoo” the leaping, prancing otherworldly star of the PBS Kids show by the same name, hosted by brothers Martin and Chris Kratt. He was a graceful, long-limbed co-star with cream and russet fur and bright, intelligent yellow eyes and he taught millions of children what a lemur is. The show aired 65 episodes in just over two years, 1999-2001, and continues in syndication.

“He was great to work with,” said Martin Kratt, a 1989 Duke graduate who had volunteered at the Lemur Center as a student. “He’d jump in through the window and we’d feed him mangoes or garbanzo beans. Sometimes he’d grab our noses with those soft sifaka hands.” 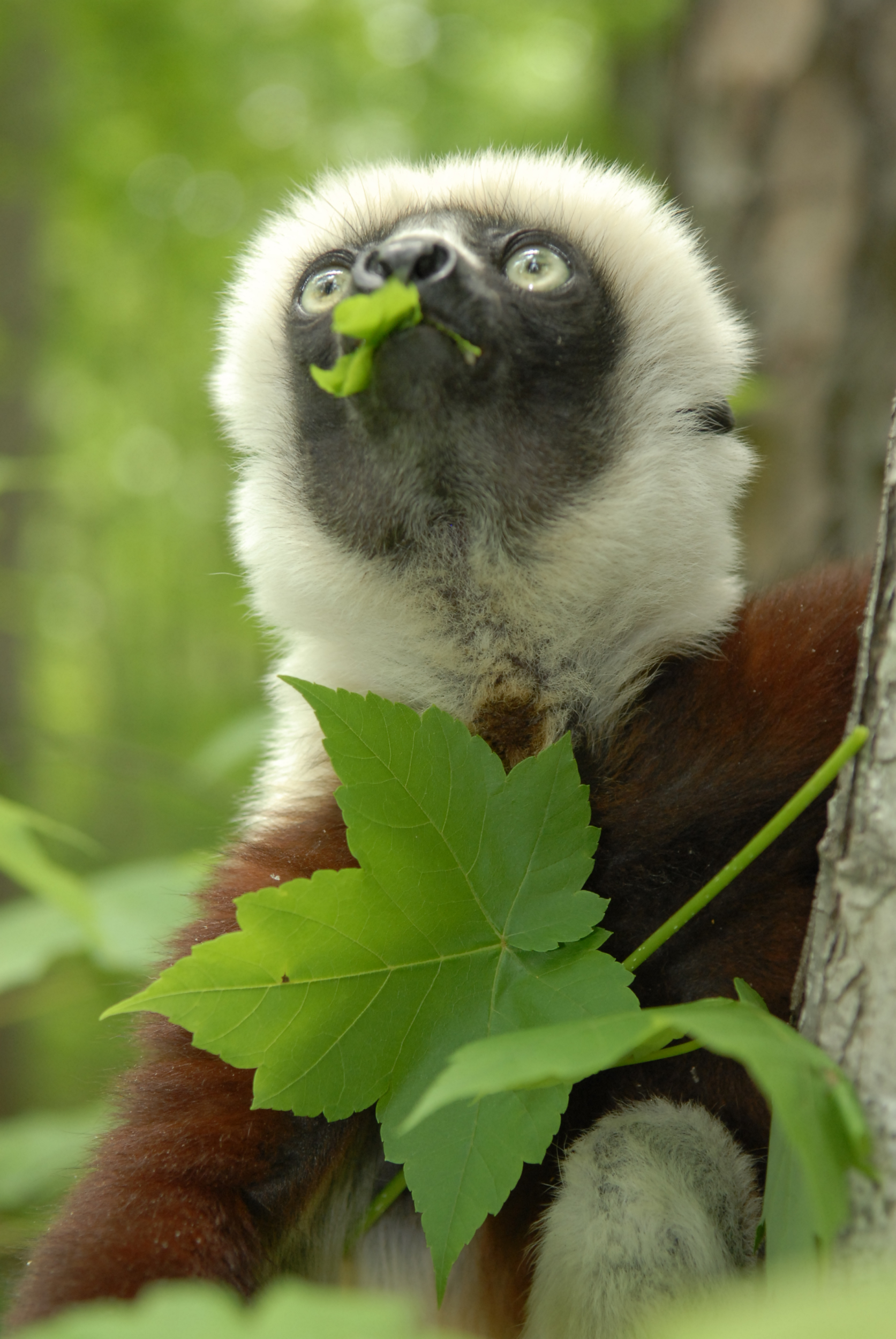 Jovian was living in a group that included just him and his parents when they were visited and filmed in June 1997 by Chris and Martin Kratt who planned to produce a PBS Kid’s show called Zoboomafoo. The Kratt brothers wanted to host their wildlife show for kids with an unusual cohost: a sifaka named Zoboo. Most of the time Zoboo would be played by a talking lemur puppet, but the brothers were interested in obtaining action footage of a real sifaka  to intersperse with footage of the puppet.

They auditioned several sifaka groups at the Lemur Center on film. But it came as no surprise to anyone who was familiar with Flavia’s group that the Kratts selected Jovian and his somewhat elderly father Nigel to be the model for Zoboo. “They and their family were, and still are, the most distinctively beautiful sifakas in our colony, as well as being the easiest and most delightful animals to work with,” said David Haring, the center’s registrar and photographer.

In October 1997,  the Kratts returned to Durham with a complete stage set erected inside a specially constructed outdoor cage. For nearly two weeks they filmed Jovian, Nigel and Flavia leaping around and exploring what was to become known on Zoboomafoo as Animal Junction.

“You can probably see all three of them on the show, but Jovian was the star,” Kratt said. “He was young and good-looking and very gentle.” 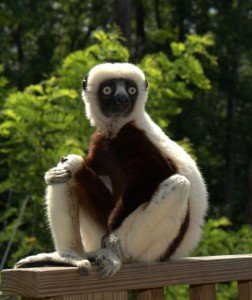 After the Kratt-inspired madness, things returned to normal for the TV stars. Jovian continued to live with his parents and a new little sister, Rupilia, until October 1999 when tension developed between father and son and Jovian had to be removed from his family group.

In October 2000, Jovian was introduced to an established  group consisting of adult female Alexianus and her offspring, females Livia, 2-1/2, Pia, 1-1/2, and a male named Marius who was just six months.  Jovian worked his way into that complex group, and in April, 2001 they were released into a free-range outdoor enclosure at the Lemur Center — Jovian’s first taste of the acrobatic sifaka lifestyle at age 7.

He and Alexianus produced the first infant for both in February 2003 and went on to have two more infants in each of the following years. Sadly none of their infants survived to adulthood. Pia was kicked out of the group by her mother Alexianus in April 2004 and just over a year later, Alexianus died.  Jovian and Pia were then reunited in June 2005 as a new breeding pair and continued to free range during the warmer months, spending winters in a huge indoor cage.

The construction of two new buildings at the Lemur Center kept the pair from free-ranging temporarily, but they continued to produce infants, making a triumphant return to the natural forest enclosure in June, 2012.

Jovian is survived by his mate Pia and their family group, consisting of his six-year-old son Conrad,  two-year-old son Ferdinand and ten-month-old daughter Gertrude. Jovian also has three  grown offspring who left his group for breeding but remain at the Duke Lemur Center, Matilda, Gisela and Charlie. A fourth grown daughter, Wilhelmina lives at the Cincinnatti Zoo. Wilhelmina provided Jovian with his first four grandkids, and currently his daughter-in-law  Pompeia, Charlie’s partner, is pregnant with grandkids number five and six.  He is also survived by a brother, Julian, who is alive and well at age 22.

Jovian’s health began declining last winter, yet he was able to rally and spend the summer enjoying the freedom of free ranging with his family in one of the Lemur Center’s forested natural habitats.  When he began to lose weight this June, his keepers made sure that he was isolated in a cage in the middle of the natural enclosure at feeding time for at least a half hour so that he could eat undisturbed. But Jovian was always eager to be released from his cage and rejoin his family in the forest.

He was seen occasionally wrestling on the forest floor with offspring Gertrude and Ferdinand, all the while maintaining a watchful eye to avoid the wrath of Pia, who never failed to chase him from choice food items and weighed 30% more than him.

His job as a male sifaka was to maintain a watchful eye over his group and to carefully monitor Pia’s frequent scent-marking, keenly anticipating the one day a year when she would come into estrus. When that day arrived on October 13 this year, Jovian and Pia were seen repeatedly breeding throughout the day. It is too soon to tell if Pia is pregnant, but everyone is hopeful that Jovian will have successfully produced one more infant — to be born in late winter, 2015.

Pia and Jovian produced nine infants in their time together, seven of which are still alive. “Every year the scenario would be repeated in a delightful seasonal pattern,” Haring said. “Pia’s pregnancy would be confirmed in the fall and she would deliver a single infant in December, January or February (and one time in July!), at which point she would be isolated from her family for a couple of weeks to allow bonding time with the infant.”

The mother and infant would slowly be introduced to the family, starting with Jovian, and then, gradually the juveniles would be included. “When the time came for the infant’s introduction to Jovian, everyone always marveled at how intensely interested he was in the newborn,” Haring said. “Some sifaka sires could care less. Jovian would immediately make eye contact with the infant and continue to watch it as he approached, making the unique sifaka contact call the technicians call ‘sifaka singing.’ ”  Pia would eventually allow Jovian to sniff, groom and even handle the infant. He was gentle with the newborns, carefully cradling and grooming them, protecting them from interested juveniles and technicians.

“Watching our young interns get excited over being in the presence of the real Zoboomafoo this summer made me realize just how lucky those of us at the Lemur Center were who had the opportunity to get to know the real Jovian in his prime,” Haring said. “He was a playful, gentle, intelligent animal and perhaps one of the best sifaka sires ever.”