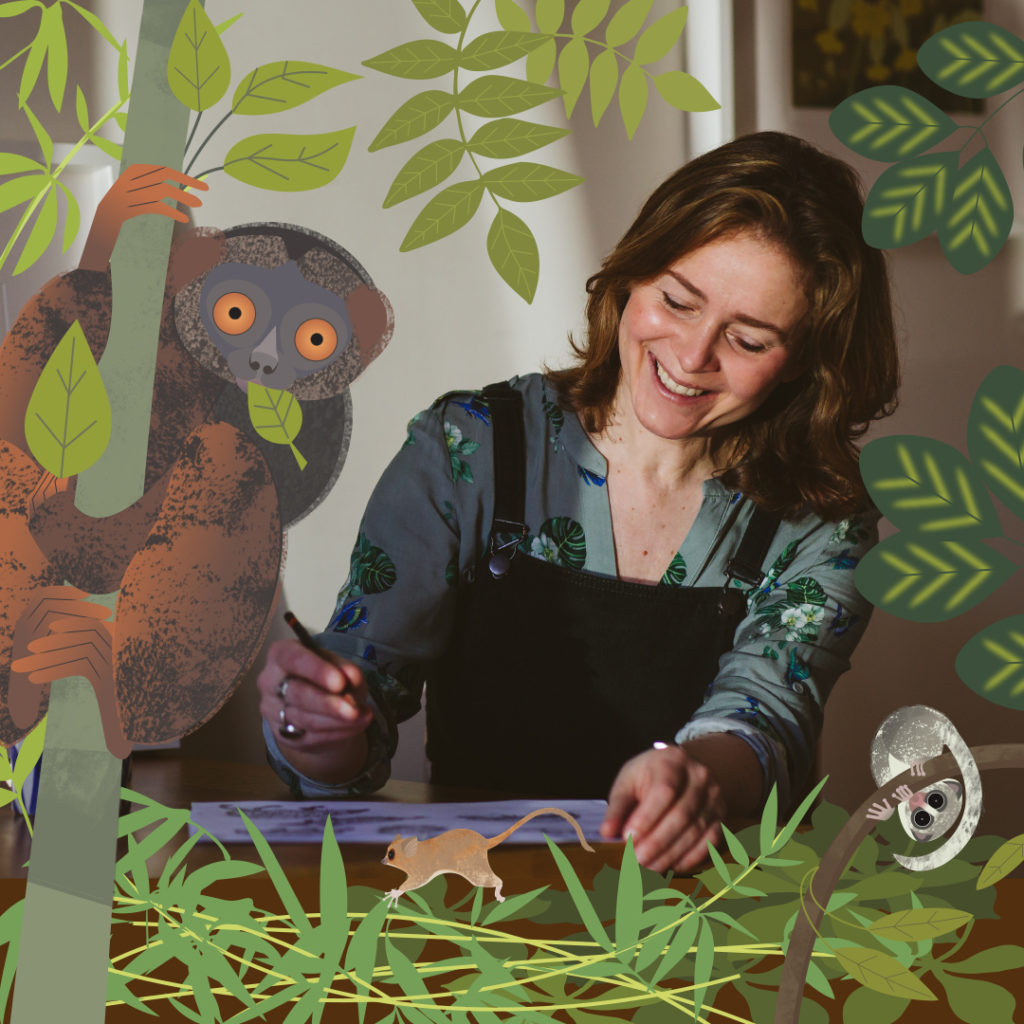 Artist Rachel Hudson with illustrations of a wooly lemur, a mouse lemur, and a dwarf lemur. Courtesy of the artist.

We’re thrilled to announce that 4/7/2020 marks the first day of 100 LEMURS, an international collaboration between the Duke Lemur Center, a world leader in the study, care, and conservation of lemurs, and Rachel Hudson, an award-winning wildlife illustrator based in the UK! Rachel will illustrate and post one lemur species a day, partnered with text written by Duke Lemur Center researchers and education staff.

Join the DLC on Facebook and Instagram to learn about a new lemur species every day for 100 days! We hope you’ll follow along and discover lemurs’ incredible diversity, and why lemurs — the most endangered group of mammals on Earth — are so special, and so urgently in need of our protection.

Rachel Hudson is an award-winning wildlife illustrator based in the UK. She regularly works with many of the UK’s leading nature conservation organizations to illustrate children’s magazines, family trails, display boards and identification guides. Her work has appeared in BBC Wildlife Magazine, discovery centers and on nature reserves throughout the country.

Her first illustrated children’s book 100 Endangered Species will be published in the US in spring 2021.

In collaboration with Duke Lemur Center, a world leader in the study, care and conservation of lemurs, Rachel is illustrating one lemur a day for 100 days, as part of the 100 Day Project on Instagram: #100lemurs. We hope you will follow along and discover why these endangered animals are so awesome and in need of our protection. 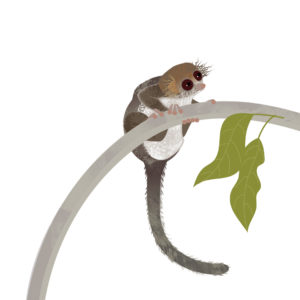 Welcome to Day 1 of 100 LEMURS, in collaboration with Rachel Hudson Illustration! We start off with: The hairy-eared dwarf lemur (Allocebus trichotis)! The hairy-eared dwarf lemur earns its name from the long, wavy hairs that extend from its short, round ears and are thought to help with gathering sensory information. Commonly known as “allocebus,” these are among the most elusive of all lemurs.

Not only is it small and nocturnal, but allocebus is also patchily distributed across Madagascar’s eastern rainforests, meaning that many forests have no allocebus, and some forests have a lot of allocebus. Allocebus has traits of both mouse and dwarf lemurs: it’s intermediate in size; eats gums, insects, fruits, and flowers; and can go into hibernation. This species also has a really big home range for its size.

For many lemur scientists and enthusiasts, merely seeing an allocebus is a lifetime goal. 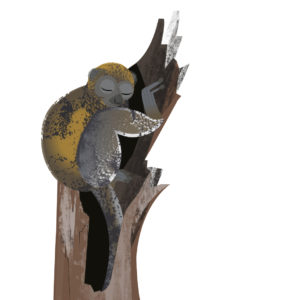 Meet the Bemaraha woolly lemur (Avahi cleesei), also known as Cleese’s woolly lemur in recognition of the #MontyPython actor John Cleese’s passion for lemurs and his work to save them in the wild!

John Cleese has assisted the Duke Lemur Center with conservation projects in Madagascar and even recorded a PSA for the DLC’s Adopt a Lemur program. (Watch it at https://lemur.duke.edu/cleese!) 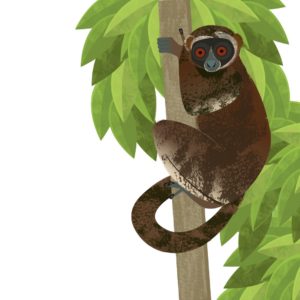 What’s nocturnal, medium-sized, and brown, with a characteristic white stripe down the back of its leg? It’s the eastern woolly lemur (Avahi laniger), of course!

Living in lush rainforests, these big-eyed lemurs sleep away the day by huddling against vertical tree branches, where they’re surprisingly well camouflaged. It might be fair to say that eastern woolly lemurs are lazy: They spend up to 60% of the night resting! But hey, there just isn’t much energy to spare when young leaves are your major food source.

Eastern woolly lemurs make a famous call that sounds like “ava hy”, which may be the derivation of their scientific name, Avahi.

Meet the Lorenz von Liburnau’s woolly lemur (Avahi occidentalis)! These lemurs live in the northwestern corner of Madagascar. They prefer dry deciduous forests and are specialized folivores (leaf eaters), preferring the young leaves and buds of 20 different species of trees.

These nocturnal lemurs are endangered, like most lemur species. They tend to become active around dusk and live in groups between 2-5 individuals. Females will typically have a single infant each year.

They are very closely related to the Bemaraha woolly lemur (see DAY TWO above), and share very similar coloration patterns. 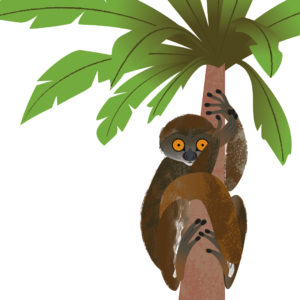 Today we’re featuring the rare and elusive Sambirano woolly lemur (Avahi unicolor) — the last of the woolly lemurs to featured in the project!

Sambirano woolly lemurs are some of the trickiest lemurs to spot in the wild, and what little is known about them comes from only a handful of individuals that have been observed in Madagascar’s forests.

Like many species of woolly lemur, the Sambirano woolly lemurs are nocturnal. They are arboreal and prefer to live in Madagascar’s northwestern moist tropical lowland forests, and in higher altitudes in the Sambirano forests after which these lemurs are named. Their habitat is among the last pockets of forest in Madagascar with high levels of endemism (animals and plants completely unique to a defined geographic location), which contributes to their endangerment. 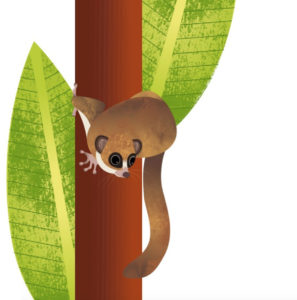 It is a medium-sized dwarf lemur with reddish-brown coloration on the body, hairy black ears, black circles around the eyes, and a pointy little snoot. Like most dwarf lemurs, the furry-eared dwarf lemur is arboreal and quadrupedal. This species lives in rainforests and has been identified in various locations in the east and north of Madagascar, including degraded forest fragments.

They are ecologically flexible, sleeping in nests, tree holes, or entangled branches, and hibernating underground. Like many of the smaller, more elusive nocturnal lemurs, its conservation status is unknown. 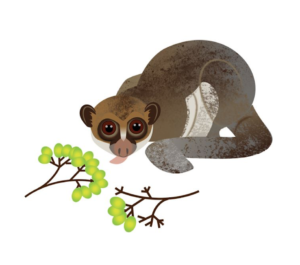 Found along a stretch of lowland-montane eastern humid forests, this nocturnal lemur is nearly twice the size of other dwarf lemur species, weighing 450 grams after hibernation. From October to March, the Geoffroy’s dwarf lemur will feed specially on fruits, but also on flowers and nectar, and occasional invertebrates. During the dry season, it will hibernate. Greater dwarf lemurs can hibernate underground or inside tree holes.

There is still insufficient data to determine its population trends in the wild. 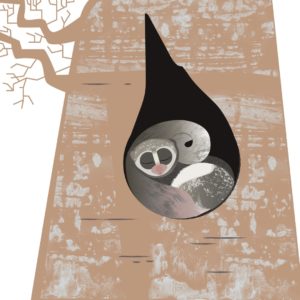 Here’s a species that’s dear to our hearts: the fat-tailed dwarf lemur (Cheirogaleus medius), featured here with a FAT tail!

A star of the DLC’s non-invasive research program, this little lemur is called “fat tailed” because of its ability to store up to 40% of its body weight in its tail, enabling it to hibernate for up to seven months!

Because heat is problematic when attempting to torpor, choosing the right tree is key. In thick baobab trees, lemurs are insulated from the outside world and hibernate efficiently. In thin trees, lemurs experience temperature swings and may struggle to keep stable. In western Madagascar, forests with thick trees and plenty of fruit are home to the healthiest fat-tailed dwarf lemurs. 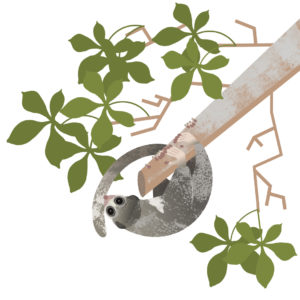 The fat-tailed dwarf lemur doesn’t always have a fat tail as depicted in Day 8. In fact, after emerging from hibernation, dwarf lemurs have rather SKINNY tails! October to April is the active season for dwarf lemurs, who spend their nights searching for fruits atop the forest canopy in western Madagascar.

The active season is also the reproductive season, and female dwarf lemurs have only a few months to produce, nurse, and wean their offspring before they must begin fattening again.

Juvenile dwarf lemurs grow quickly, and with both mom and dad showing them the ropes, rapidly become independent. As adults, fat-tailed dwarf lemurs weigh just 150g (0.3lbs) at their thinnest, and are the smallest of all dwarf lemurs. 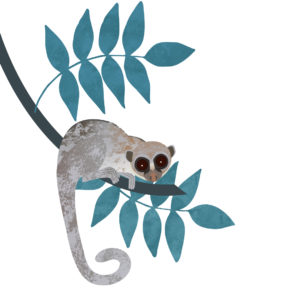 Sibree’s dwarf lemur was once believed to live in only one forest area in eastern Madagascar. When this forest was destroyed, scientists believed Sibree’s dwarf lemur to be extinct in the wild. Fortunately, with more surveys, other populations of this dwarf lemur have since been found – though only in high-altitude rainforests, which are rare and increasingly fragmented.

Sibree’s dwarf lemur sleeps inside tree holes while active, but hibernates underground to avoid freezing ambient conditions, for up to seven months a year! They are considered the “ancestral” dwarf lemurs and are critically endangered, partly because of their specialization to living in cold environments. 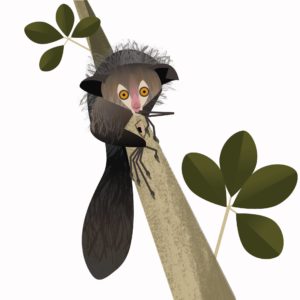 This species is so dear to us that it’s featured in the DLC’s official logo: the aye-aye!

As percussive foragers, aye-ayes (Daubentonia madagascariensis) use their delicate, skeletal-looking middle fingers to tap on wood, listening for the movement of tasty insects that might be lurking beneath the surface.

These incredible animals are unique even in the company of other lemurs. Unlike the others, aye-ayes have continuously growing, rodent-like front teeth that can chew through the bark or tree that is keeping them from their dinner!

That same tapping finger has an incredible range of motion and can be operated independently of all other digits, making it all too easy for them to grab a snack and keep hunting, all night long.

Hunting and habitat destruction have put aye-aye populations at risk.

In the late 1980s, the Duke Lemur Center established the aye-aye conservation breeding program in North America and was one of the first places in the world to house the mysterious and, at the time, little-studied aye-aye. To learn more about the rare nocturnal primates, please visit our aye-aye species homepage. You can even symbolically adopt one of the DLC’s aye-ayes through our Adopt a Lemur program! 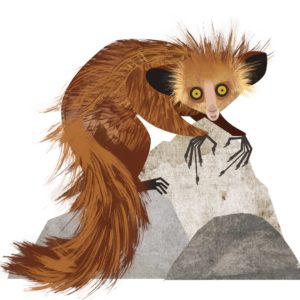 Can you imagine an enormous aye-aye with fingers up to a foot long?! The extinct giant aye-aye was about 2.5 times more massive than its living relative, Daubentonia madagascariensis (see Day 12 above). This stocky lemur had powerful front limbs that may have been used to tear into logs in search of the insect prey that the modern aye-aye eats.

Even though it is unlikely that the giant aye-aye could move very quickly, its size would have helped protect it from predators prior to the arrival of humans on Madagascar. Once humans arrived only a few thousand years ago, however, this conspicuous ground-dwelling lemur was easily hunted. Today, our only evidence of giant aye-ayes comes from a few fossils, some of which show evidence of human use. 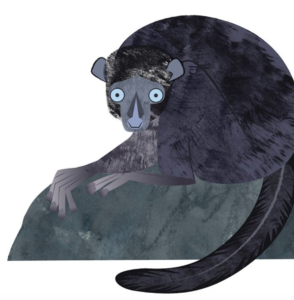 Blue-eyed black lemurs are the most distinctively sexually dichromatic of all the lemurs. Males are black with blue eyes, whereas females are orange-brown with blue eyes.

Hailing from the tropical subhumid forests of northwestern Madagascar, these rare lemurs are among the most threatened primates on Earth.

Blue-eyed black lemurs are one of the Duke Lemur Center’s signature species, and the DLC works within a network of other AZA-accredited institutions worldwide to develop and adhere to Species Survival Plans (SSPs). The blue-eyed black lemur SSP uses carefully managed conservation breeding programs to create a “genetic safety net” for this critically endangered species. 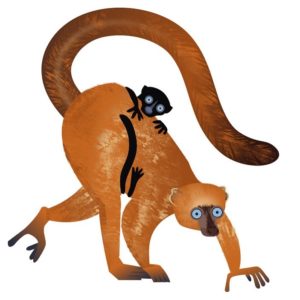 Although male and female blue-eyed black lemurs are dramatically different colors as adults, male infants are born with the same orange-brown coloration as their mothers. This helps camouflage the infants during their first weeks of life, which they spend clinging tightly to mom’s belly or back fur.

Whereas female infants retain their orange-brown coloration into adulthood, males begin to turn black at 5-6 weeks of age. As adults, males are completely black with bright blue eyes. This momma is carrying an older male infant, who has lost his orange fur and now sports his “big boy” coloration!