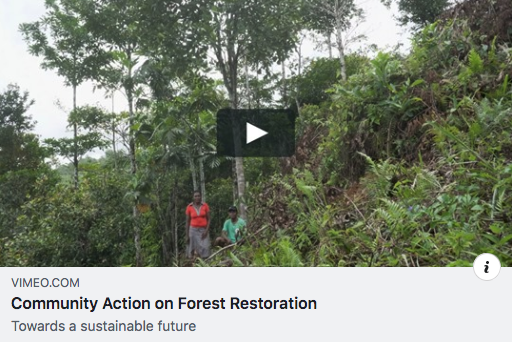 Click anywhere on the image above to watch the video.

Duke Lemur Center is a founding and managing member of the Madagascar Fauna and Flora Group (MFG). The MFG has been involved in Madagascar forest restoration for many years, first at Parc Ivoloina, then also at Betampona Reserve. The idea at Betampona has been to create a forest buffer zone around a fragile isolated island of forest, in order to give the reserve additional protection from environmental influences such as drying winds and fires. We planted the first experimental plots near the MFG base village of Rendrirendry 25+ years ago, and after initial success, a forest restoration program was later begun, working with villagers around the periphery of Betampona.

At first, villagers were suspicious and did not trust what the MFG was trying to do – they were worried that MFG was going to take away their land. However, over time, the MFG team of Malagasy conservation agents won the trust of local people and many began to plant trees in the Betampona buffer zone, in partnership with MFG. Former MFG project director Dr. An Bollen, who now makes conservation videos about local communities impacting their environment, has produced a film on this story of reforestation success around Betampona: https://vimeo.com/droneentity/madagascar-en.

The story reinforces to me something we say repeatedly – that conservation in Madagascar or any developing country does not take years, but decades. And even a generation. It takes building relationships and gaining trust and integrating different ideas into the local community. In doing so, each conservation activity becomes more than the activity itself – it is education as well (or “sensibilization” as the French would say). Reforestation is as much about teaching the value of trees and the forest and changing attitudes, as it is about actually putting trees back on the landscape.

Lastly, I would like to say that this video makes me so very proud of the MFG conservation agents, who are local people themselves. We hired some of the older agents in the film when they were inexperienced young local men back in the mid-‘90s, and they have now become the leaders of the conservation efforts at Betampona and experts in their respective fields of responsibility, whether lemurs, reptiles, birds, or forest restoration. They are the ones who have succeeded in bringing the conservation message to local villagers, friends and family. But it just takes time.

The Duke Lemur Center is a founding and managing member of the Madagascar Fauna and Flora Group (MFG), a consortium of zoos and other institutions committed to supporting conservation in Madagascar. MFG projects in Madagascar focus on community-based conservation techniques operating in the area around Betampona Natural Reserve and Parc Ivoloina on the east coast.

Betampona is a protected natural forest and also the site of the first reintroduction of captive-born lemurs back to the wild, a collaborative DLC/MFG effort. The reintroduction has evolved into an important program of conservation research and ecological monitoring, with education and reforestation components linked to nearby Ivoloina. Thanks in part to DLC support and MFG presence in Betampona, the reserve has been protected from illegal wood cutting and poaching of wildlife. “Perhaps the most valuable result of the restocking program is that the release project became the springboard for a much broader conservation program for Betampona,” says DLC conservationist Andrea Katz.

Learn more about the DLC’s work on-the-ground in Madagascar on our conservation homepage.