FROM THE ARCHIVES: Into the Wild: Surviving Pioneer Lemurs Celebrate A Decade In The Rain Forest 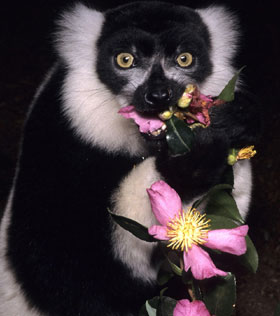 Sarph lives. He’s nearly 15 years old, and he knows where the predators lurk, where to find food, and how to make a baby with his wild-born mate.

Seven-year-old brothers Tany and Masoandro are there too, in the steep and steamy rainforest of the Betampona Reserve in northeastern Madagascar, a large island off the southeast coast of the African continent.

They’re perfectly at home in the wild now, but these three black and white ruffed lemurs were born in not-so-wild at the Duke University Lemur Center.

Ten years ago, the first wave of transplants were media darlings as they set off on their daring adventure to return to the motherland and attempt to enrich its dwindling gene pool. These three remaining seven-pound lemurs are rugged pioneers, the surviving members of three waves of immigration over four years that sent 13 captive-born animals to restock a wildlife reserve. There are at least six lemurs born from the restocking, and possibly a few grandchildren as well.

In addition to eight lemurs from Duke, five additional animals were provided for the program by the Hogle Zoo in Salt Lake City, the Wildlife Conservation Society’s St. Catherine’s Island reserve in Georgia, the Los Angeles Zoo and the Santa Ana Zoo.

Lemurs are prosimians, distant primate cousins of humans with binocular vision, nimble five-fingered hands and a social disposition. They live only in Madagascar, which faces huge pressures toward deforestation and habitat loss.

Despite heart-breaking early losses of unsophisticated lemurs to some worldly-wise predators, the effort to reinvigorate black and white ruffed lemur populations in the Betampona Reserve has been a qualified success. The Duke-born animals survive in 5,000 acres of relatively undisturbed rainforest.

In fact, their presence has helped protect the habitat from further devastation. The well-publicized restocking a decade ago and the irresistible appeal of these primates built support and excitement for the entire Betampona reserve.

“In concentrating on that one species, the whole area was protected,” said Charlie Welch, a Duke Lemur Center research scientist. He and his wife Andrea Katz, a staff specialist at the Lemur Center, first proposed the reintroduction program in 1992. They had found just 35 black and white ruffed lemurs, lyrically named Varecia variegata, in an area of Madagascar that could support far more. The forest of the reserve was relatively undisturbed, but for long-term survival a population needs at least 50 adults to prevent inbreeding and maintain genetic diversity.

The Duke Lemur Center, formerly known as the Primate Center, had been breeding lemurs since 1968 with the hope of one day reintroducing them to the wild. But it would be easier said than done.  Reintroduction would be risky and expensive, and the setting had to be just right.

The habitat had to provide the right kinds of food and shelter, but not be inhabited by too many lemurs, Katz said. “We felt that Betampona could support more black and white ruffed lemurs, and research bore that out.”

The animals also had to be able to figure out their new surroundings. An earlier experiment reintroducing golden lion tamarins to their Brazilian home suffered very high losses in the early stages of the project when the captive-raised animals had difficulty adapting to life in the wild.

“That was the only other primate project we had to look at and their early loss rates made us nervous,” Katz said. “But we felt it was important to try it.”

The team also needed to ensure that Betampona would be protected in perpetuity. “We could see that the reserve was going to disappear if something wasn’t done,” she said. “The animals are endangered in the wild for a reason and usually that reason hasn’t been corrected.”

Upon their arrival in Betampona in November 1997, five lemurs from Duke were gently reintroduced into special enclosures that gave them the sights and sounds of the forest while they still got regular feedings of bananas, mangoes, pineapple and monkey chow. They were also given some of the wild forest fruit that they would soon be searching for on their own.

On the appointed day, Nov. 10, 1997, the cage was opened for the animals to begin exploring. “We had expected the lemurs to remain close to the release cage for the first days, where they could be sure of an easy meal of monkey chow,” Welch wrote at the time. “Completely contrary to our predictions, within five minutes all of the lemurs had moved away from the release site.”

Praesepe and Letitia, two adult females, and Janus, an adolescent male, immediately scooted more than a kilometer down a trail. Despite radio collars and distinctively shaved tails that would allow trackers to pick them out more easily, Praesepe, a 10-year-old matriarch, stayed out six days before being nabbed with the help of an observant villager. She had actually gained weight living off the land.  She lived another 32 months in the wild, producing one surviving offspring with a captive-born male.

Praesepe’s Duke-born son, Sarph, also quickly connected with a wild group. He has fathered two infants with wild females, contributing some much-needed new genes to the threatened Betampona population. Welch, who owns a “Sarph Lives” T-shirt, guesses the 14-1/2-year-old lemur might be able to live another 15 years, if all goes well. Captive lemurs can live to about 40.

“In a way Sarph’s survival is almost more important than the breeding,” Welch said. “The primary objective of the introduction was to see whether captive-born lemurs could make a go of it, and what techniques we’d need to get them reintroduced.”

In November 1998, after a natural forest training or “boot camp” period at the Lemur Center, a second wave of four animals from Salt Lake City, Georgia and Los Angeles were released in similar fashion. Three died within two years; the fourth was a female who proved too tame.

Finally, in January 2001, three males born at Duke and a female from the Santa Ana Zoo were released. Two of the males survive, the twins Tany and Masoandro, with at least one offspring to their credit. The other male vanished. The female, Hale, lived 32 months, and produced twins with a wild male.

The experiment has produced at least six surviving offspring from five of the 13 reintroduced animals. Of the original 13, more than half survived for more than two years in the wild.

In all, three females and two males were killed by the catlike predator called a fossa, itself an endangered species unique to Madagascar. One male fell to his death from a tree. One female disappeared and is presumed dead, and one female was simply too familiar with people and too naïve about the wild and was returned to captivity after two years of trying to go native. She’s still living comfortably in a Madagascar zoo.

“Our losses would have been higher if we hadn’t had a team monitoring them so closely,” Welch said. “Reintroductions are very complicated, and high loss rates are unfortunately the norm. However, when balanced with what we learned about reintroduction methods, the genetic contribution of the new animals, and with the present level of protection of the reserve, we feel that the project has been a success.”

Welch and Katz have spent nearly 17 years together in Madagascar and were named Chevaliers de l’Ordre National by the Malagasy government, a form of knighthood, for their overall contribution to conservation in Madagascar.

The benefits of the release also have spread far beyond the lemurs. Today with consistent support from the Madagascar Fauna Group, research continues on Betampona’s rich flora and fauna from a permanent research station at the edge of the forest. The station also serves as an active site for the training of Malagasy university students and provides environmental outreach and agroforestry training for villagers living around the reserve.

“Perhaps the most valuable result of the restocking program is that the release project became the springboard for a much broader conservation program for Betampona,” Katz said.

Betampona’s Restocked Lemurs by the numbers: