Notes from the Field: IUCN Red List meeting in Madagascar 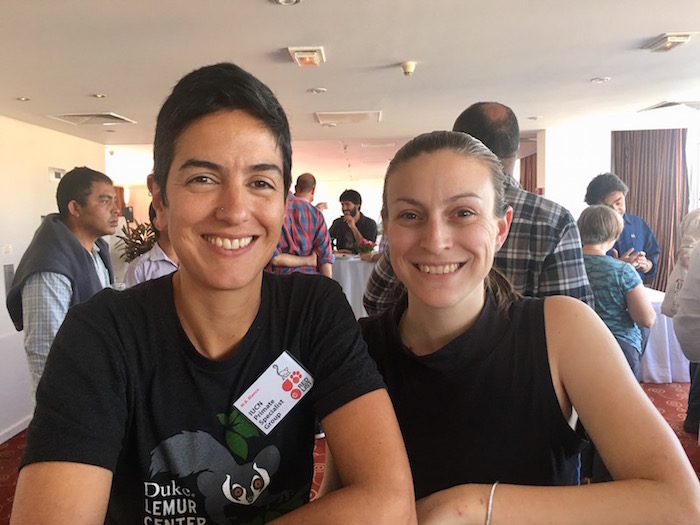 Lemurs are the most critically endangered group of vertebrates on Earth. Deforestation, illegal logging, and bushmeat hunting threaten 94% of lemur species in the wild, and most lemur species cannot be maintained in captivity.

These facts are frequently espoused on in the internet, cited in scientific publications, used to justify funding for conservation projects, and will be heard by any visitor coming to the Duke Lemur Center for a tour.

But, how do we know? Well, we recently had the opportunity to find out. 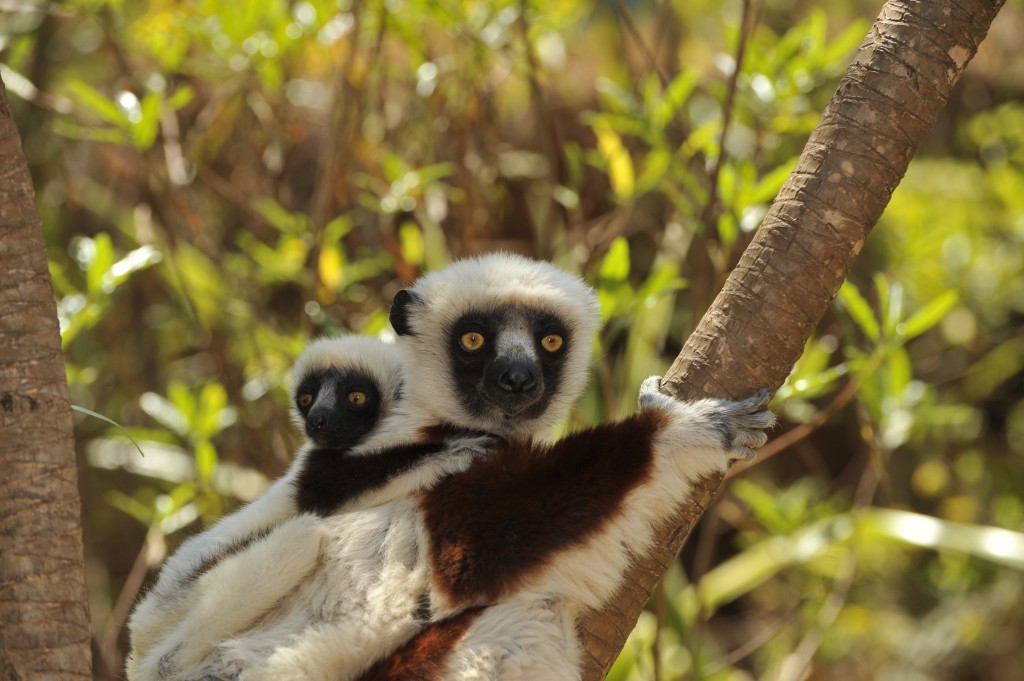 Assessment of endangerment status for all lemur species

Marina Blanco and Lydia Greene here, two DLC researchers who have been working with lemurs since 2004 and 2007, respectively. Earlier this month, we traveled to Antananarivo, the capital of Madagascar to attend the International Union for Conservation of Nature (IUCN) red-listing workshop for lemurs. Over five days, the group’s task was to assess the endangerment status of EVERY lemur species (yep, all 112 of them!) and decide on action plans for their continued conservation.

The meetings were championed by a giant in the field of conservation: Russell Mittermeier, who has been the chairman of the IUCN Species Survival Commission Primate Specialist Group since 1977. Christoph Schwitzer and Jonah Ratsimbazafy were instrumental in the overall organization. All ~40 participants came from Madagascar and abroad and represented, more or less most of Madagascar’s major ecotypes, geographic areas and lemur species.

Each day began at 9:00 a.m., when as a group, we discussed each individual lemur species. Those discussions were a combination of new facts, personal experiences, stories of habitat loss, and examples of threats to lemur survival, giving us the overall sense that things are not getting better.

During the week we navigated between the excitement of talking about recently described species (several within the group including mouse and dwarf lemurs) and the crude reports on deforestation and greater pressure hunting; reports of lost fragments and disappearing populations mixed with news of recently found “lost forests” in remote areas; charismatic lemurs being hunted by relatives of local authorities, and new sightings of several lemur species expanding their known geographic distribution.

The main challenge was to put all this information in perspective, and to try to formalize the assessments using the criteria presented to us. In the end, only a subset of all information could be used in the actual assessment. 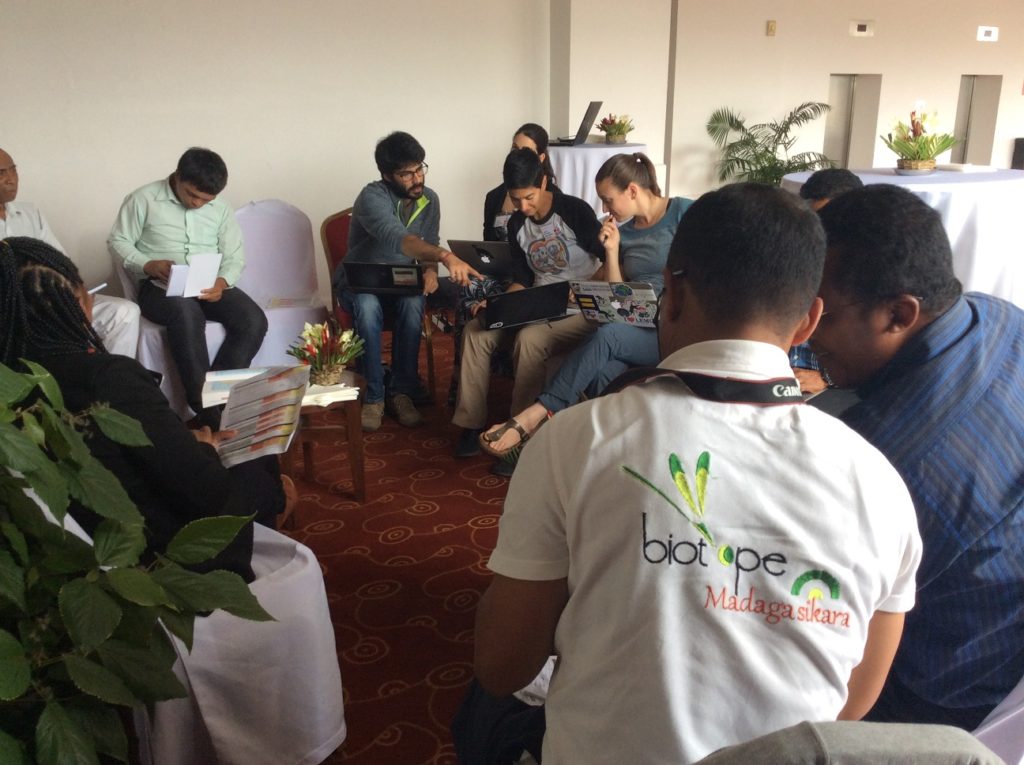 The IUCN recognizes five main criteria under which a species can be listed as threatened, endangered, or critically endangered:

The ‘A’ criteria are related to past, present, and future population decline and the particular pressures that species face, like habitat loss, exploitation, and disease.

The ‘B’ criteria are related to home range distribution, and species must live in a small home range or in very few, fragmented locations to qualify under these criteria.

The ‘C’ and ‘D’ criteria are related to population size, for example if there are only 250 mature individuals left of that species, whereas the ‘E’ criteria relates only to quantitative analysis.

Once all the species were tallied, we turned to creating action plans. This process will likely take the better part of a year, but we got a good jump start. We listed the priority sites in Madagascar that harbor a number of endangered species, discussed current threats, and came up with a list of research priorities for continued study. The plan should kick into place in 2020.

The results are all preliminary for now, until the raw data and updated assessments are submitted to IUCN later this summer for revision and approval. For now, we would like to give a couple of examples showcasing two of the lemur species housed at the Duke Lemur Center (and dear to our hearts) that switched their statuses from the last assessment in 2012: the Coquerel’s sifakas, Propithecus coquereli, had been listed as ENDANGERED until now, but due to increasing deforestation rates in the dry forests of western Madagascar, severe population declines are expected in the next decades. It was pointed out by an expert that dry forests, once they are gone, are quite impossible to regenerate, unlike other forest types. An upgrade to CRITICALLY ENDANGERED status for all Coquerel’s sifakas has been proposed to the IUCN committee.

On the other end of “size” and “habits”, the small-bodied nocturnal fat-tailed dwarf lemur, Cheirogaleus medius, had been categorized as LEAST CONCERN until now. In addition to the same threats as described for Coquerel’s sifakas (fat-tails also live primarily in dry forests), the geographic range of this species has significantly shrunk since 2012: fat-tailed dwarf lemurs occupying the southeast of Madagascar are now considered a new species (C. thomasi), and those from the northeast had also been assigned to a new species C. shethi. Based on the new geographic range restricted to the threatened western dry forests, we proposed to upgrade this species to VULNERABLE.

Overall, we found the experience very valuable, for understanding how these workshops work and what they mean for lemur conservation. We have a better idea of what data are needed for better assessments and what are the research priorities for lemurs. 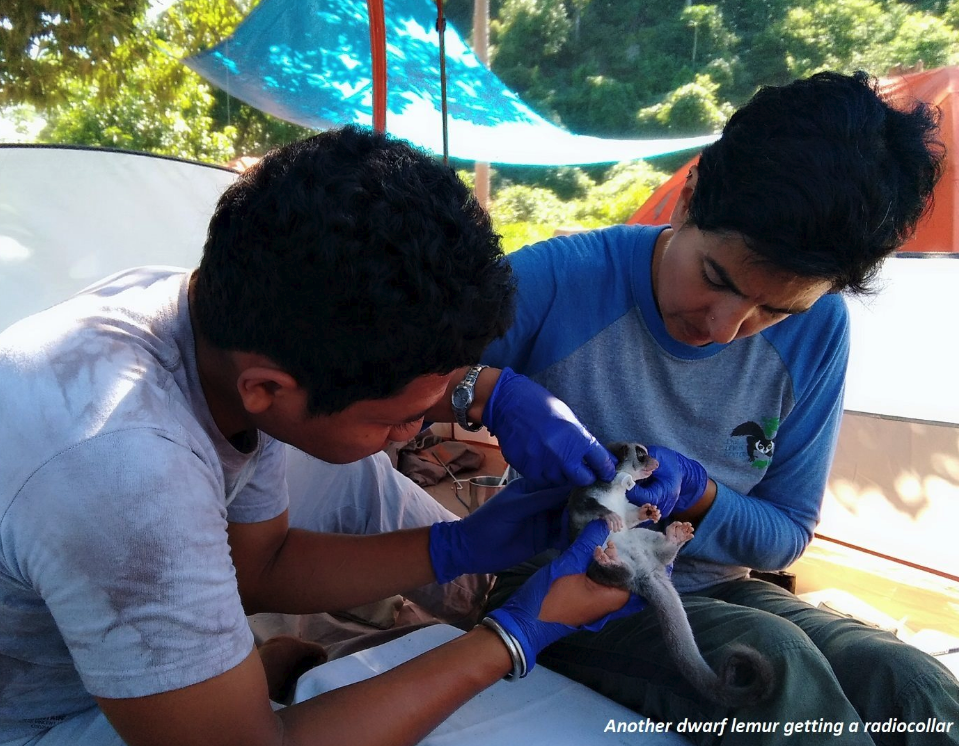 Marina fits a wild fat-tailed dwarf lemur in Madagascar with a radio collar.

100% of funds for the Duke Lemur Center’s work in Madagascar are from private donations and grants. Please consider making a tax-deductible donation today. Your gift at any level makes a difference!

Learn more about our conservation work in Madagascar HERE.