FROM THE ARCHIVES: The DLC’s Founding Aye-aye Fathers (and Mothers) 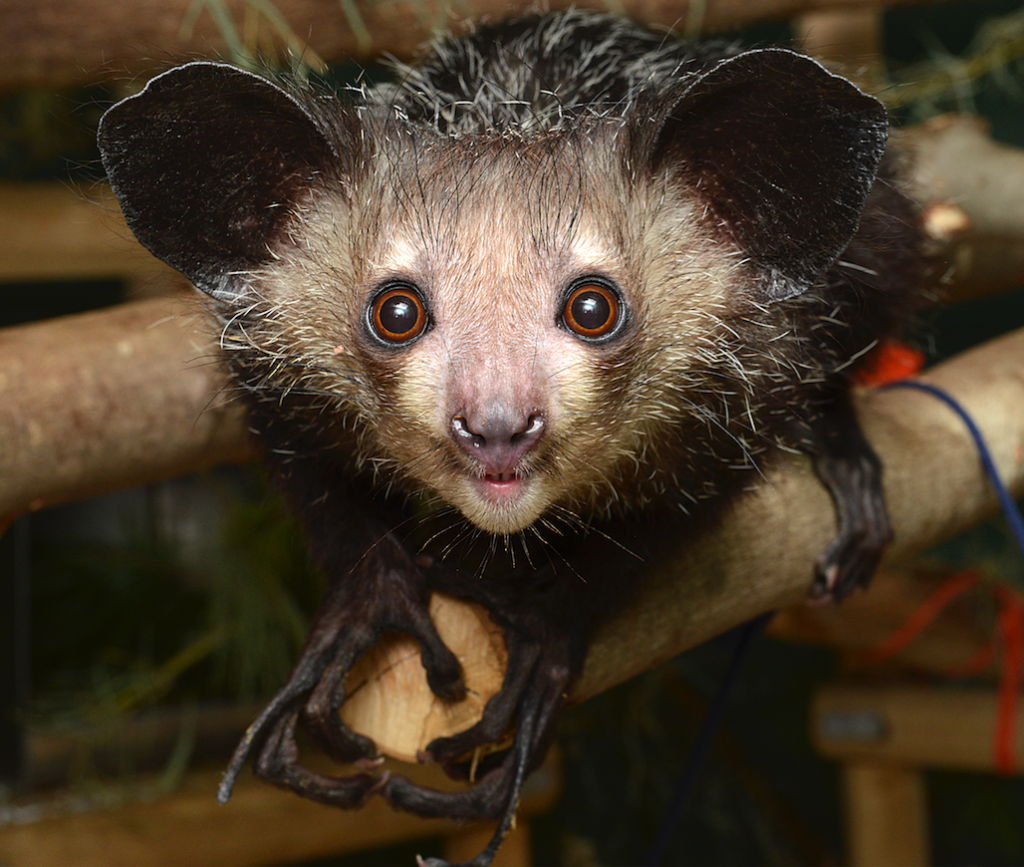 The Duke Lemur Center was one of the first modern-day captive breeding centers to house the mysterious and, at the time, little studied aye-aye. (The Paris Zoo and Jersey Wildlife Preservation Trust were other pioneers.) Three complicated and arduous DLC capture missions to Madagascar succeeded in the importation of two males (Poe and Nosferatu) in 1987, two females in 1988 (Anabelle Lee and Samantha), and one male and three females in 1991 (Mephistopheles, Morticia, Endora, and Ozma). All of the wild caught aye-aye were captured in threatened, unprotected areas containing fragmented forests in diverse locations across Madagascar.

As of 1 December 2016, there were 23 captive aye-ayes in the United States: 10 males and 13 females. Of these, nine reside at the DLC and 14 are held at six additional AZA institutions. All but one of these 23 are descendants of our original eight wild caught founder animals. The original eight—only one of which did not produce offspring—have not only produced descendants enough to send to the six domestic zoos, but sufficient aye-aye have bred successfully to ship animals overseas to zoos in London, Frankfurt, Tokyo, Bristol, and the Jersey Channel Islands.

The arrival of the first aye-ayes

1987 was a long time ago, but I clearly remember the arrival of the first aye-ayes ever imported into the U.S., Poe and Nosferatu (“Nosy”), at Raleigh-Durham International Airport late one December evening. I drove to the airport in my tiny Toyota hatchback where I met DLC Director Elwyn Simons who, thankfully, had driven in his more Director-worthy larger vehicle. We had only a short wait until the plane carrying Dr. Patricia Wright, accompanied by kennels containing Poe and Nosferatu, arrived. Dr. Wright was triumphantly returning from the capture mission in Madagascar where she and field assistant Patrick Daniels, after nearly a month of fruitless searching through empty aye-aye nests, had finally located and captured the two males a few days before they were scheduled to leave the country. (Dr. Wright’s return might have been even more triumphant if she had managed to capture a male/female pair!) For an interesting and amusing account of the rigors of this capture mission as well as the trials and tribulations of air travel with two aye-aye from Madagascar to NC, check out a YouTube video of Dr. Wright’s talk from the Duke Lemur Center’s 50th-anniversary symposium.

A surprisingly short time after the plane’s arrival, the aye-ayes were made available to us. I loaded one into my Tercel and off we drove to the Lemur Center! 1987 was a radically different time. Today, any incoming shipment of a non-human primate (NHP) of any species into the U.S. is strictly monitored and controlled by the CDC. Special precautions must be taken to assure that any crate containing such a critter be segregated from the general public at all times. Any human coming in direct contact with crates or carriers must be outfitted in a full hazmat suit, and when a shipment of imported NHPs arrives at an airport, the plane must be met by the hazmat-suited officials, who are the only ones authorized to unload the animals. I always thought it must be unnerving to be waiting to deplane, and look out the window only to see a pair of workers, garbed head to toe in full hazmat gear, unloading your plane’s cargo! Regulations also state that after unloading, special vehicles must be used to transport the NHPs from the airport to a CDC-approved quarantine facility (for 31 days) ensuring, again, that the newly imported primates do not pose a risk to human health. The days of grabbing your newly imported primate at the airport baggage claim, then casually schlepping the kennel through the terminal to your personal vehicle parked out front, are gone for good! 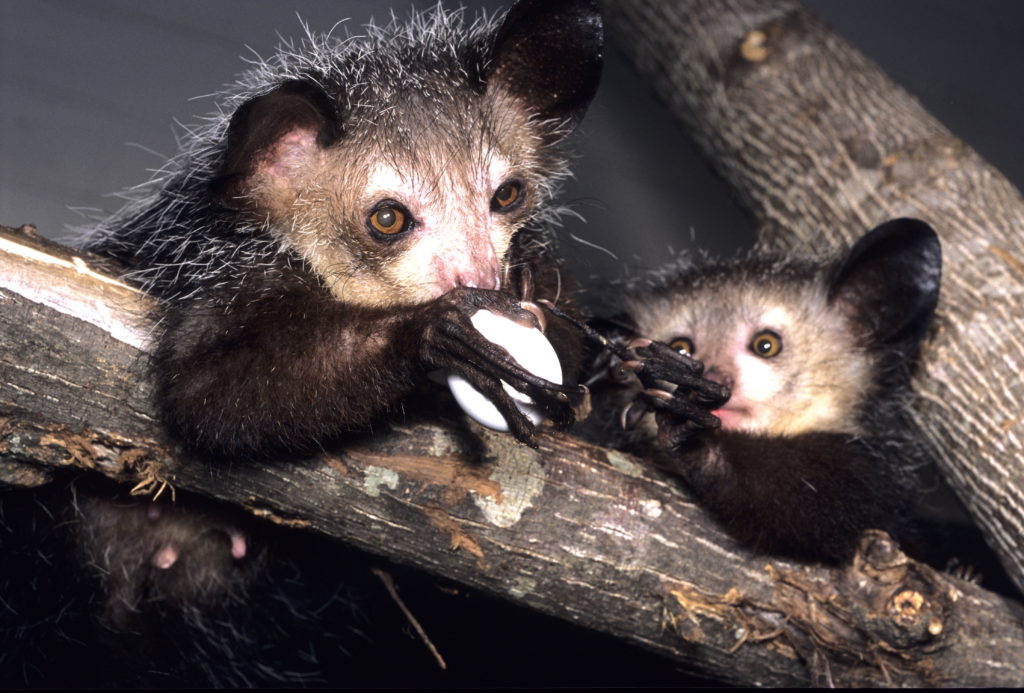 An aye-aye mother and her infant sharing an egg.

Unraveling the secrets of aye-aye husbandry

When I began working at the Center in the early 1980s it was thought that aye-ayes might actually be extinct in Madagascar, as it had been years since anyone of any scientific authority had seen one in the wild (perhaps due to the fact that most foreign scientists had been banned for years from Madagascar). But just a few years later, by the time the Lemur Center had launched its first aye-aye capture mission in 1987, it was apparent that aye-aye were actually widely distributed throughout the island, although nowhere in high density. Still, virtually nothing was known about their social structure or dietary needs.

Since details of the animal’s natural history were unknown to biologists, how did we know how to feed and take care of the animals when they arrived at the DLC in 1987? Good question! In fact, until Yale University student Eleanor Sterling’s dissertation work was completed in 1994, in which she identified four main types of food favored by the aye-aye (insect larvae, seeds, nectar, and fungi), little was known about wild diets. However, even in 1987, we knew that wild aye-aye ate a variety of insect larvae like those found in trees and rotten logs; hence larvae (available commercially as mealworms) became an important component of our original captive diets. Initially we presented the mealworms in stainless steel bowls but, not surprisingly, neither Poe nor Nosy was familiar with the function of bowls and failed to recognize a writhing mass of squirmy mealworms so presented as food.

We quickly figured out that if we delivered the grubs in a more naturalistic manner – inside a hollow stalk of bamboo, for instance – we might have more success. Sure enough, the aye-aye approached these bamboo stalks exactly as they would any potentially edible item. With their enormous ears perked forward and their noses nearly touching the stalks, the aye-aye would move slowly up the bamboo, all the while rhythmically tapping it with their third fingers. Their tapping would clue the animals to the fact that the bamboo was hollow and therefore a potential source of burrowing insects. Then they would immediately rip into the tough stalk using their powerful jaw muscles and sharpened incisors, until an opening was made. At that point, using their third fingers, the aye-aye would explore every inch of the inside of the bamboo until a grub was found, at which point it would be hooked with the finger and pulled directly into the mouth.

Poe and Nosy also enjoyed foods supporting the fact that they were omnivorous lemurs: coconuts, cucumbers, chicken eggs, corn on the cob, and melons among them. In a matter of months, we had arrived at what we thought was a suitable captive diet, basically consisting of portions of everything the animals liked plus a variety of novel fruits and vegetables, as well as some primate chow. There were some problems with this diet: the aye-aye would leisurely pick through the large platters presented to them daily, selectively eating only their favorite food items. Often they consumed only about 15-20% of the total amount of food given to them, leading to an enormous amount of waste and making it difficult to document exactly how much food the animals were consuming (not to mention the fact that it is never a good idea to give primates a diet consisting mainly of their favorite foods!).

Nonetheless all went smoothly for the colony in the years following the last importation in 1991, with the eight founders all doing well (except for a juvenile female, Annabel Lee, who arrived with her ancient mother Samantha in 1988 and died a little over a year later). Then, the celebrations started as the founders began to produce infants! Blue Devil, the first aye-aye to be born in captivity in North America, was discovered unexpectedly in his mother’s nest in April 1992. (Endora had been pregnant when she arrived from the wild in 1991.) Next, the first infant conceived from a captive breeding, Goblin, was born in October 1992, to Ozma and Mephistopheles. Cruella was born in October 1993 to Morticia and Poe. In June of 1994, Endora produced another infant, Merlin, this time from a captive breeding with Nosferatu.

Then, just before his first birthday, Goblin’s technician noticed that he was looking lethargic and dragging one of his legs. Radiographs revealed that he had undergone a stress fracture due to poor bone density, in turn caused by a vitamin deficiency. Our precious infant had developed rickets! It was at this point that we realized that our aye-aye diets were flawed and nutrition experts were called in for consultations. An extensive diet survey was undertaken in 1993 by Sue Crissey, a nutritionist from the Chicago Zoological Society.

The survey, which carefully documented each food item given the animals and whether it was consumed or rejected, revealed that we needed to introduce a nutritionally complete, commercially available primate chow. Of course we had been providing chow all along, but in the midst of their full trays of choice food items, the aye-aye were simply not consuming the most nutritious food, the chow—because, let’s face it, chow is dry and somewhat tasteless and what self-respecting primate would turn down coconut, mango, egg, and corn on the cob for a monkey chow which probably tasted like cardboard? It became clear that in order to entice the aye-aye to eat chow we had to reduce the amount of their favorite food items, so the animals would feed on the less appealing but essential chow.

The animals were less than enthusiastic about this new diet plan, until one of our technicians had a brilliant idea: concoct a chow gruel, flavor it with something tasty and then present it to the animals in a more naturalistic container: namely a hollow stem of bamboo from which the animals could dig it out with their fingers much as they would grubs. After much trial and error and with a variety of flavorings (vanilla extract turned out to be the initial favorite), the aye-ayes began to feed on this gruel, and since that day, neither the colony’s infants nor our adults ever suffered again from any sort of nutritional deficiency.

In the years that followed, additional surveys were undertaken, with the aye-aye diets over time becoming more and more refined and sophisticated. Our general husbandry techniques have also evolved greatly since the early days, as there has been a push to provide more and more enrichment to the animals: food puzzle boxes, the construction of complex arboreal pathways, and provision of a wide variety of nesting material and natural logs for foraging. These refined husbandry techniques were what allowed our population to thrive and captive aye-aye numbers to grow to the extent that we could send healthy captive born animals across the country and even across the globe.