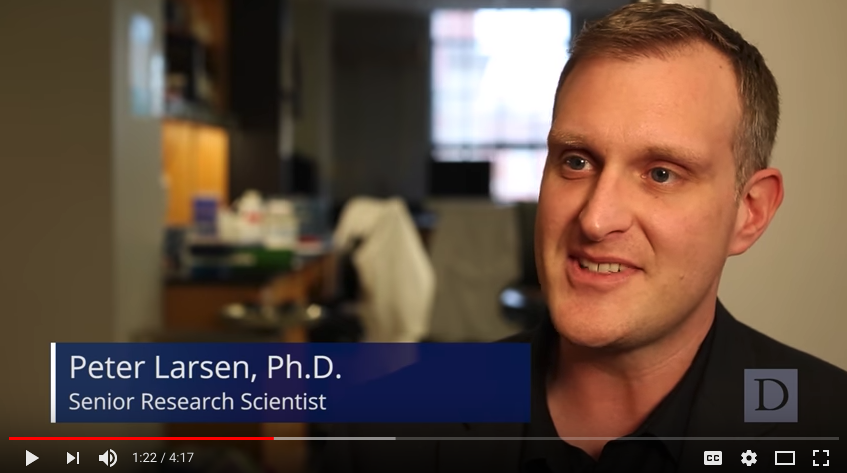 CLICK to watch Peter Larsen, Anne Yoder, and lots of cute mouse lemurs in the video “Why Study Mouse Lemurs?”, produced by Duke University in February 2018.

Why are lemurs so special? Here’s just ONE reason: Because non-invasive research on grey mouse lemurs has helped shed light on devastating human diseases like Alzheimer’s: https://today.duke.edu/2017/03/jumping-genes-suspected-alzheimers.

Like humans, mouse lemurs develop amyloid brain plaques and other Alzheimer’s-like symptoms as they age. Studying these tiny primates has helped lead to a new hypothesis from the lab of Anne Yoder, a biology professor at Duke University and Director of the Duke Lemur Center, and rethinking how to treat people with diseases like Alzheimer’s. If the lab’s hypothesis holds up, “it could help identify people at risk sooner, before they develop symptoms, or point to new ways to delay onset or slow progression of the disease.”

So the moral of the story is, lemurs aren’t just cute; they’re crucial for research! Because they’re primates, they’re a closer genetic match to humans than mice or rats are — and their unique contributions to science are just one of MANY reasons we should protect these extraordinary animals and learn everything we can about them. 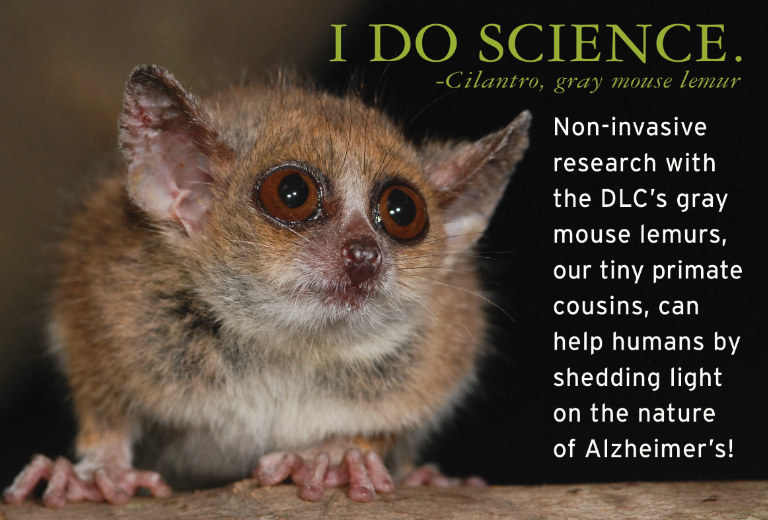 Or, read the paper itself in Alzheimer’s and Dementia: The Journal of the Alzheimer’s Association: “The Alu Neurodegeneration Hypothesis: A primate-specific mechanism for neuronal transcription noise, mitochondrial dysfunction, and manifestation of neurodegenerative disease.”

Watch a VIDEO in which research scientist Peter Larsen and DLC Director Anne Yoder respond to the question “Why Study Mouse Lemurs?” as it pertains to Alzheimer’s, Parkinson’s, and other diseases of the aging brain.

All DLC research is non-invasive, meaning that we do not allow research that will harm our animals. Learn more about the Duke Lemur Center’s research program here.

In 2011, the blog That’s Basic Science! described in easily understandable terms (for non-scientists!) why “the mighty mouse lemur” is an ideal candidate for Alzheimer’s research. Note that this article was written before the Duke Lemur Center began working with mouse lemurs, and that now there IS a lab outside of Europe researching these tiny animals: The Yoder lab right here at Duke!

The Duke Lemur Center is North America’s only breeding colony of gray mouse lemurs. Watch the video “Why Study Mouse Lemurs?” to learn why these little primates are so fascinating and so important.

In 2013, the Duke Chronicle described how the DLC’s new mouse lemurs could aid Alzheimer’s research.

Duke Lemur Center is partially funded by Duke University and the National Science Foundation, but we rely heavily on private donations and endowments to help pay for animal care and housing. Please consider making a donation to support the DLC’s mouse lemur colony and our threefold mission of research, education, and conservation.

More information is available HERE, or you can click on the ‘Donate Now” button below to be taken directly to Duke’s secure online giving site. Thank you so much for your support! We couldn’t do this without you!