At only three inches tall, gray mouse lemurs are the smallest lemur housed at the Duke Lemur Center and the second smallest lemur in Madagascar. Since they are so small and require fewer resources than other lemurs, mouse lemurs have adapted well to disturbed forests in Madagascar and are one of the most widespread and abundant lemur species. They can even be spotted in gardens and roadside bushes.

Like humans, mouse lemurs can develop symptoms of neurological disorders similar to Alzheimer’s disease and dementia. Past research on such diseases has been conducted on lab rats and mice, but mouse lemurs – being much more similar to humans genetically – show more promise for breakthroughs in neurological aging research.

In 2017, non-invasive research on the DLC’s tiniest primates has led to the development of a new Alzheimer’s hypothesis. If the hypothesis holds up, it could help identify people at risk sooner, before they develop symptoms, or point to new ways to delay onset or slow progression of the disease. Read more about this exciting new hypothesis HERE.

Please note that all of the research conducted at the Duke Lemur Center – including aging research on mouse lemurs – adheres to our strict no-harm, non-invasive policy. In addition, mouse lemur breeding at DLC follows Species Survival Plan guidelines for preserving genetic diversity. We house one of the only breeding colonies of gray mouse lemurs in North America.

Gray mouse lemurs are featured in episode 11 of the Duke Lemur Center Virtual Tour along with Moholi bushbaby. Don’t be fooled by the size: These two fun-sized primates are some of the coolest, smartest, and fastest animals living at the Duke Lemur Center, and they’re helping with some really awesome non-invasive research projects, too—including shedding light on Alzheimer’s disease. Using positive reinforcement training with pineapple juice rewards, they can even use tiny touchscreens!

While these primates are sometimes too tiny and too fast to see clearly on a live tour, we take you behind-the-scenes to get a good look at the gray mouse lemur and the Moholi bush baby in all their (miniature) glory.

Like humans, mouse lemurs can develop symptoms of neurological disorders similar to Alzheimer’s disease and dementia. Non-invasive research at the Duke Lemur Center is helping us understand these illnesses to help us better diagnose and treat human cases. Learn more about why this research is so important and what we can learn from our smallest lemur HERE. 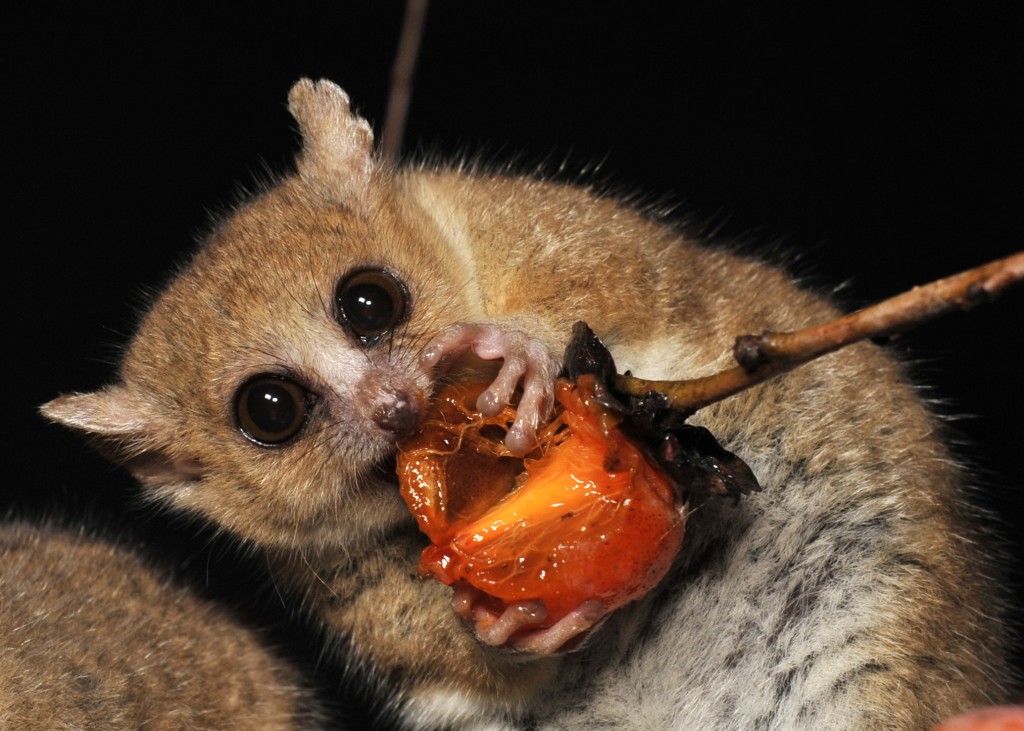 The gray mouse lemur is a solitary forager. It feeds primarily on insects (mostly beetles). When insect prey is less available, they will also eat fruit, flowers, and leaves. Despite their size, mouse lemurs are fierce hunters and will opportunistically eat small reptiles and amphibians. 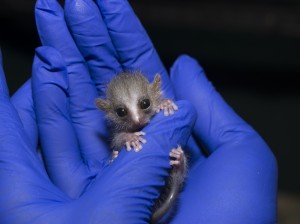 In the wild, mating occurs in mid-September, and infants are born 59 – 62 days later in November. Mouse lemurs breed at the DLC from mid-April through July. When they are born, infants weigh less than 1/10 of an ounce (3 grams). Single infants, twins, and triplets are all common. They are born in a leaf nest or tree hole, and are carried in their mother’s mouth if moving them becomes necessary. By the time the infants are two months old they are behaving much like adults and are capable of independent locomotion.

Gray mouse lemurs are nocturnal, solitary foragers who congregate at daytime sleeping sites. Females and dependent offspring will sleep in groups of up to 15. Home ranges of females are grouped into core areas and one male’s home range can overlap those of several females. Females are considered to be dominant over males, giving them preferential access to food and the choice of with whom to mate.

Like the fat-tailed dwarf lemur, the gray mouse lemur usually undergoes a season of torpor during Madagascar’s dry season (April/May to September/October), all though the animals come in and out of the torpor state more frequently than dwarf lemurs. At this time, female mouse lemurs become totally inactive and may remain dormant within their tree holes for several months. This conserves energy and reduces the threat of predation during the time of year when resources are scarce. At the same time, however, males may be much more active than females, perhaps establishing hierarchies for the upcoming breeding season. Prior to the dry season, both sexes store large reserves of fat in their hind legs and tail (up to 35% of body weight) which helps get the animals through the period of resource scarcity.

Gray mouse lemurs are found throughout the dry deciduous forests all along the western edge of Madagascar, from Majunga in the northwest to Tulear in the southwest. A disjunct population has also been identified in the southeast near Fort Dauphin.

At one time in the fairly recent past, the genus Microcebus was thought to contain just two species with non-overlapping ranges: the gray mouse lemur (M. murinus) found in the drier regions of the north, west and south and the rufous or brown mouse lemur (M. rufus) of the humid rainforest regions of the east. In 2000, three new species of mouse lemurs were discovered by an international team of primatologists working in the forests of western Madagascar. Additional research has brought the total number of mouse lemur species to eighteen. Needless to say, in this day and age it is extremely rare that any new species of primate is discovered, and this new diversity of mouse lemur species is remarkable!

Number of young: usually twins, one pair per year

Symbolically mouse lemur: Want to learn more about this species AND help support their care, not only here but also in Madagascar? Consider symbolically adopting Thistle, a mouse lemur, through the DLC’s Adopt a Lemur program! Adoption packages start at just $50.

Engage in conservation locally: Though it doesn't directly affect lemurs, the DLC also promotes local conservation. We encourage visitors to support local ecosystems and protect local habitats, similar to the way we're helping the local people in Madagascar preserve lemurs' natural habitat. A fun way to do this is to plant a local pollinators garden at your home or school. The DLC itself incorporated a Monarch Waystation into its landscaping for the summer tour path in 2017. You can also stop using dangerous chemicals on your lawn, which might end up in lakes and streams and harm fish, frogs, and other animals.