This visually striking species hails from the tropical forests of eastern Madagascar, where its thick fur is well suited to the wet, sometimes chilly environment of the rainforest canopy. Weighing up to nine pounds (4.1 kg), black and white ruffed lemurs are among the largest living lemurs and the largest pollinators in the world: as they feed, pollen sticks to the ruffs of fur around their faces and gets transported from tree to tree.

Female ruffed lemurs give birth to litters of infants. Unlike other lemurs whose infants cling to their bellies or backs, ruffed lemurs “park” their infants in nests while foraging. Mothers can have as many as six infants at a time, although litters of two to four are most common. Ruffed lemur families are highly vocal, and their raucous loud calls can be heard up to a half-mile away.

There is little variation in the ecology and behavior between the two species of ruffed lemur, or Varecia, housed at the Duke Lemur Center.

The black and white ruffed lemur is critically endangered in Madagascar, primarily due to hunting, habitat loss, and fragmentation. Threats include slash-and-burn agriculture (tavy) and illegal logging and mining, as well as natural disasters like cyclones. 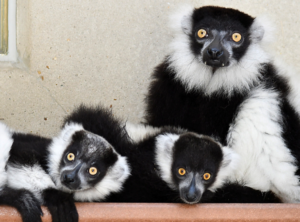 Want to learn more about ruffed lemurs AND help support their care and conservation not only here but also in Madagascar? Consider symbolically adopting Halley, a female crowned lemur, through the DLC’s Adopt a Lemur Program! Your adoption goes toward the $8,400 per year cost it takes to care for each lemur at the DLC, as well as aiding our conservation efforts in Madagascar. You’ll also receive quarterly updates and photos, making this a fun, educational gift that keeps giving all year long!

Social structure: male-female pairs (with offspring) and multi-male, multi-female communities depending on the season

Diet: specialized fruit eaters but will eat nectar and seeds if fruit is scarce

Mating: highly seasonal, infants are born in September and October in Madagascar and between April and May in North Carolina

Number of young: typically 2-3 per season

Ruffed lemurs are the largest quadrupedal lemur in Madagascar. Their bodies are around 20 inches (50 cm) long and their tails are slightly longer at around 23 inches (58 cm) which helps them balance as they move through the canopies of the rainforest.

Their thick fur helps them stay warm and dry despite the rainy conditions. Black and white ruffed lemurs have patches of black and white fur but the patterns can vary between individuals and populations. The signature ruff around their chins is white while their faces, hands, feet, and tails are always black. 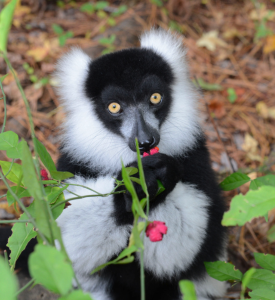 Their diet consists mostly of fruit, nectar, and pollen–they are considered the most frugivorous of all the lemurs. Small amounts of leaves and seeds are also consumed, primarily during the dry season when fruit and nectar are scarce or nonexistent. When appropriate flowers are available, the lemurs eagerly feed on nectar by sticking their long noses deep into the flower. During this feeding, the flowers are not harmed, but the lemur’s snouts become coated with pollen, which is then transported to other flowers. Thus, for certain species of plants in the tropical forests of Madagascar, the ruffed lemur is an important pollinator.

Unfortunately, many of the larger fruit trees essential for the survival of the ruffed lemur are also regarded as the most desirable hardwoods by logging interests and are often the first to be cut down when a forest is selectively cut. Thus, the presence of healthy populations of ruffed lemurs is considered an important indicator of the health of a tropical forest. 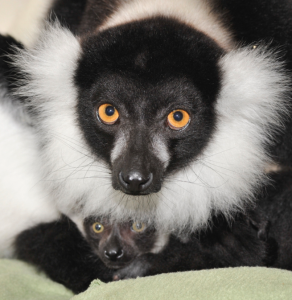 Ruffed lemur reproduction is highly seasonal. The animals breed in Madagascar between May and July. Infants are born, after a 102-day gestation, in September and October. In North Carolina, breeding usually occurs in December or January with births in April or May.

Ruffed lemur females give birth to litters of up to six infants (with two or three being more typical) in well-concealed, well-constructed nests 30 to 60 feet (10 to 20 meters) up a tree. Varecia are the only diurnal primates in the world to keep their infants in a nest. Females can nurse up to six infants simultaneously. Infant ruffed lemurs are not as well developed at birth as other species., which is not surprising given the brief gestation period.

At birth, infants are not capable of grasping the mother, so if she needs to transport them, she must pick them up and move them one at a time in her mouth. The mother generally moves her infants away from the nest after a week or two, at which point she leaves them parked in a tree while she forages nearby. Infants develop rapidly, and by three or four weeks they can attempt to follow their mother on their own.

Group size for black and white ruffed lemurs depends on the season and quality of habitat. When food is abundant, larger groups of 8-16 individuals containing adult animals of each sex are common. In the dry season, only related individuals or pairs will forage together to reduce competition. Whatever the size of a group, all members use a common home range and aggression is seen between neighboring groups. Females form the core of the group and defend its territory.

Observational studies have shown that ruffed lemurs prefer to nest and forage in large trees and spend the majority of their time in the upper half to the upper third of the forest canopy. They have been observed resting, foraging, and traveling in trees as high as 115 feet (35 m) off the ground.

Ruffed lemurs are among the most vocal of the non-human primates. Their raucous, barking vocalizations might serve several purposes: they allow distant members of the same group to maintain contact with each other even when they are foraging separately; they warn would-be competitors of territory already occupied; and they might also serve to alert other group members of the presence of an aerial or ground predator. Natural predators that can trigger alarms in Madagascar include boa constrictors, eagles and hawks, and the fossa (a weasel-like animal found only on Madagascar). One individual ruffed lemur can set off an alarm call that will alert even the farthest ranging group members. At the Duke Lemur Center, calls will be echoed by unrelated groups after an individual sounds an alarm, usually in response to a non-threatening stimulus like a passing plane.

The distribution of the black and white ruffed lemur is poorly known, especially in its northern limits. This lemur is distributed in low concentrations throughout the remnants of Madagascar’s eastern rainforest, from the Antainambalana River southward to the Mananara River. Although found in ten protected areas, black and white ruffed lemurs are thought to occur in low densities 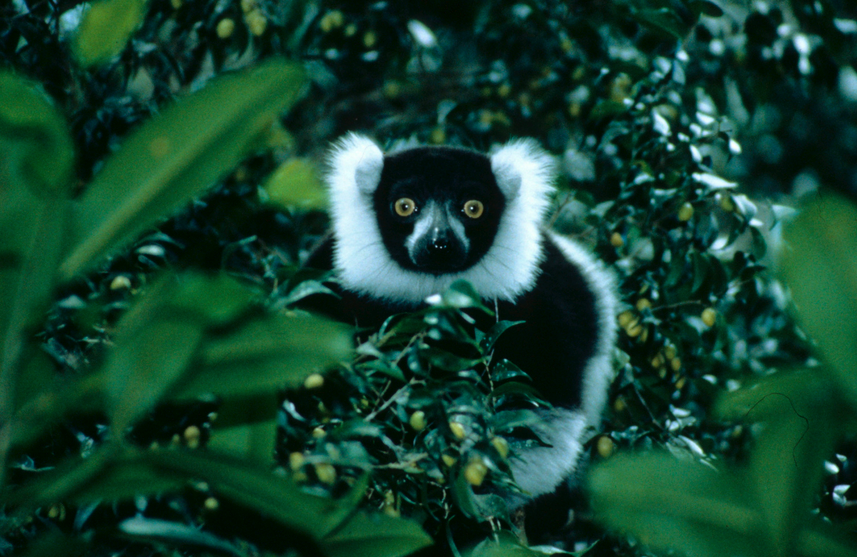 Pictured above: A black and white ruffed lemur released at Betampona. Photo by Adam Britt.

In 1997, the Duke Lemur Center, as part of a consortium of zoos and conservation groups known as the Madagascar Fauna and Flora Group (MFG), released five black and white ruffed lemurs into the Betampona Reserve in eastern Madagascar* to help support wild populations. These lemurs had been born and had lived their entire lives in the Natural Habitat Enclosures of the DLC.

In 1998 and 2001, two more groups of U.S.-born lemurs were released into the Reserve. All of these lemurs had some previous experience free-ranging in forested enclosures at the DLC, and the more such experience they had, the more adept they seemed to be at facing the challenges presented by the wilds of Madagascar. Of the 12 animals released, as many as six successfully bred in the wild, providing a much-needed infusion of fresh genetic material into the wild population.

The benefits of the release also have spread far beyond the lemurs. Today with consistent support from the MFG, research continues on Betampona’s rich flora and fauna from a permanent research station at the edge of the forest. The station also serves as an active site for the training of Malagasy university students and provides environmental outreach and agroforestry training for villagers living around the reserve. “Perhaps the most valuable result of the restocking program is that the release project became the springboard for a much broader conservation program for Betampona,” Katz said. (See "Into the Wild: Surviving pioneer lemurs celebrate a decade in the rain forest," by Karl Bates.)

You can learn more about the project by visiting the MFG webpage dedicated to the project.

The Betampona project is sometimes referred to as a "re-introduction," but it was more accurately a reinforcement (also called a restocking) of the wild population using individuals born in human care. A re-introduction, on the other hand, is putting a species back where it once lived after there are no members of the species remaining in the area. The black and white ruffed lemur population in Betampona Reserve, although small, was still extant.

We're often asked why more lemurs aren't released into Madagascar. In addition to being extremely complicated and expensive, certain several criteria must be met for a release to be successful. These include:

"Fixing" the problems that caused the habitat to become damaged in the first place (for example, logging, mining, slash-and-burn agriculture, hunting).

Currently, the pressures that the existing (wild) animals are under in Madagascar are too great for a re-introduction or reinforcement of species.

Halley loves to voluntarily cooperate in non-invasive research at the Duke Lemur Center. Recently, researchers have been trying to understand color vision in ruffed lemurs by training them to use touch-screen monitors that automatically offer a food reward when a lemur selects a red square versus a green square. Halley is a star student and you can see her in action here.

Send a lemur a present: You can send special treats to the DLC’s lemurs, as well as raw materials for us to construct special enrichment activities to keep them happy and healthy. Simply visit our amazon.com wishlist! In the image above, our ruffed lemurs play with baby mirrors gifted to them from the wishlist.

Adopt a black and white ruffed lemur: Want to learn more about this species AND help support their care, not only here but also in Madagascar? Consider symbolically adopting Halley, a female ruffed lemur, through the DLC’s Adopt a Lemur program! Adoption packages start at just $50.