Coquerel’s sifakas (Propithecus coquereli) are delicate leaf-eaters from the dry northwestern forests of Madagascar. The sifaka of Madagascar are distinguished from other lemurs by their vertical clinging and leaping mode of locomotion: these animals maintain a distinctly vertical posture and leap through the trees using just the strength of their back legs. These long, powerful legs can easily propel them distances of over 20 feet from tree to tree. On the ground, the animals cross treeless areas just as gracefully, by bipedal sideways hopping.

The Malagasy name ‘sifaka’ comes from the distinct call this animal makes as it travels through the trees: “shif-auk.”

The Duke Lemur Center was home to arguably the most famous Coquerel’s sifaka, Jovian, a.k.a. Zoboomafoo the leaping, prancing star of the PBS Kids show by the same name, hosted by brothers Martin and Chris Kratt. He was a graceful, long-limbed co-star with cream and russet fur and bright, intelligent yellow eyes and he taught millions of children what a lemur is. The show aired 65 episodes in just over two years, 1999-2001, and continues in syndication.

About Coquerel’s Sifakas
Adopt a Sifaka 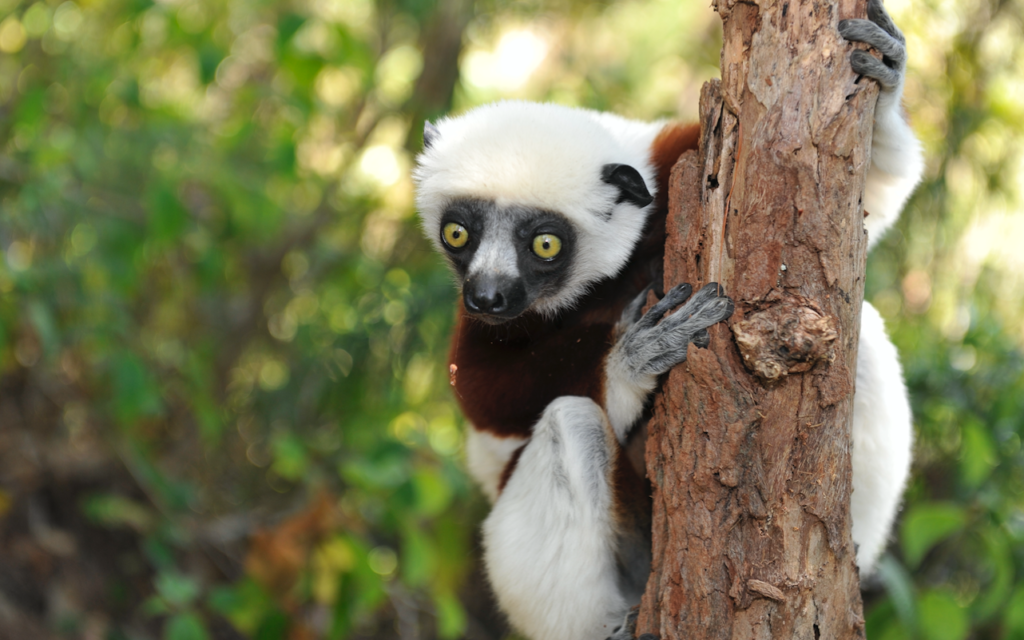 Want to learn more about sifakas AND help support their care and conservation not only here but also in Madagascar? Consider symbolically adopting Pompeia the sifaka through the DLC’s Adopt a Lemur Program! Your adoption goes toward the $8,400 per year cost it takes to care for each sifaka at the DLC, as well as aiding our conservation efforts in Madagascar. You’ll also receive quarterly updates and photos, making this a fun, educational gift that keeps giving all year long!

Mating: highly seasonal, infants are born in June to August in Madagascar and December to February in North Carolina

Number of young: 1 per season

Coquerel’s sifakas are the largest lemur at the Duke Lemur Center, standing just under two feet (60 cm) tall as they vertically move through the forest.

In Madagascar, there are several species of sifaka, with fur patterns ranging from pure black to white with different patterns in between. Coquerel’s sifakas are mostly cream-colored, with deep brown patches on each limb. 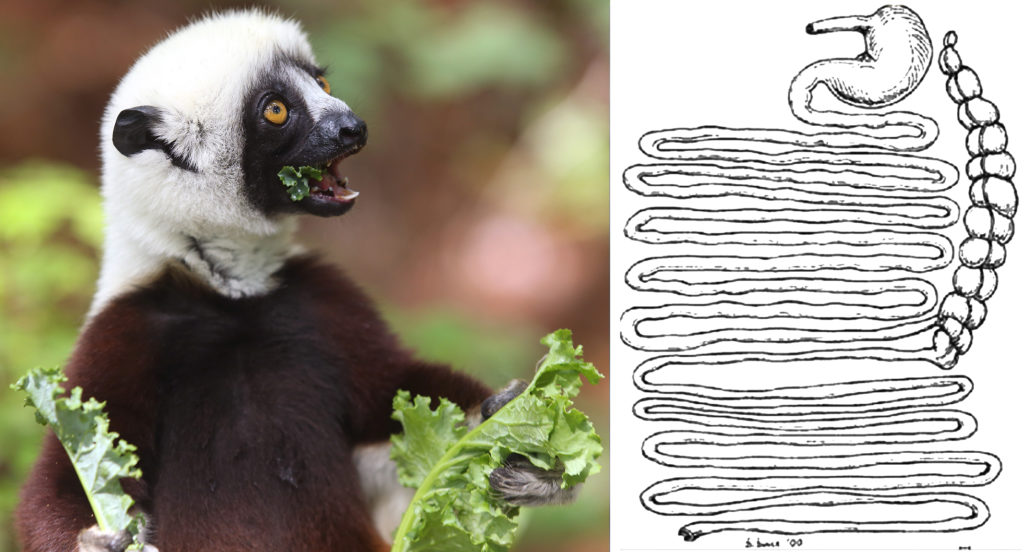 Sifakas eat foliage and seasonal fruits, and their gastrointestinal systems are designed to optimize nutrient extraction from both. Sifakas have an elongated gut tract that is an astonishing 14-15x their body length, and food takes about 24-36 hours to go from eating to excreting.

Sifakas' small intestines are 9x their body length, which provides space to absorb fruit sugars and fats. Sifakas also have an enlarged cecum — in the figure above, the cecum is the structure that looks like a rattlesnake’s tail — which is another 1x body length. The cecum is essentially an overgrown appendix and the powerhouse of microbial metabolism. In the cecum, gut microbes ferment tough leaf fibers into nutrients, degrade plant toxins, release plant proteins from the leaf matrix, and synthesize vitamins not available in the lemurs’ diets.

Because of their extremely sensitive digestive systems, Coquerel's sifakas have specialized nutritional needs. As a species, they have a reputation of being very delicate and difficult to care for, and the Duke Lemur Center is one of the very few places that has succeeded in caring for and breeding them. So much so, in fact, that all sifakas in human care are on loan from, and managed by, the Duke Lemur Center.

Because of their sensitive digestive systems, the DLC's sifakas are fed multiple times daily – which mimics the feeding bouts wild sifakas have throughout the day and keeps our lemurs’ GI tracts operating similar to that of wild populations. As part of our feeding strategy, we distribute browse (leaves) to the sifakas every afternoon — even to our free-ranging sifakas. In the wild, leaves comprise about 40-60% of sifakas’ diet; so it’s clear that browse is important, and introducing native NC browse plants into our sifakas’ diets has proved hugely beneficial.

At the DLC, our animal care team harvests fresh redbud, tulip poplar, mimosa, and sweetgum for the sifakas every day during the warmer months. The sifakas' favorite species of plant to eat here in the U.S. is winged sumac, Rhus copallinum, which is high in the tannins and sap that the sifakas enjoy.

Every fall, our animal care team also harvests and freezes enough browse to feed the sifakas throughout the winter, when there are no fresh leaves to harvest. Winged sumac is the only plant that will freeze well, without disintegrating upon thawing. We fill seven large chest freezers with sumac harvested from many different sites around Durham and Chapel Hill.

(Note: The sumac that we grow and harvest is winged sumac, Rhus copallinum — not poison sumac, Toxicodendron vernix. Toxicodendron is the same genus as our poison ivy, which believe it or not some of our DLC sifakas in the forest enclosures like to eat!)

In Madagascar, Coquerel’s sifakas feed on young leaves, flowers, fruit, bark, and wood in the wet season, and on mature leaves and buds in the dry season. As many as 98 different plant species have been recorded in their diet. However, only 12 of these plants make up two-thirds of the diet. 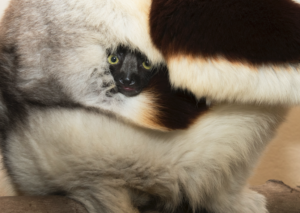 In the wild, female Coquerel’s sifakas give birth to one offspring in mid-summer, after a gestation period of approximately 162 days. At the DLC, breeding occurs in late summer to early fall, and single infants are born in late winter to early spring. Infants cling to their mothers’ bellies for the first three to four weeks of life. Then, the young sifaka will begin spending a gradually increasing amount of time riding, jockey style, on mom’s back. Infants continue to ride their mother’s back, if allowed, during times when they feel threatened until they are five months old. However, by the time the infants are three or four months old, mothers will begin to nip at them to encourage the infants to find an alternate method of transportation!

Young sifakas become sexually mature at around the age of 3.5 years.

The Lemur Center’s colony of Coquerel’s sifaka is the most successful breeding colony in the world of this species or any species of sifaka. The Center owns and manages every individual in human care, a total of around 60 animals. About half of these animals live on-site at the DLC. The Lemur Center has been successful enough with our breeding program to send animals to other zoological institutions. Many of these facilities have seen their own breeding success based on DLC husbandry guidelines.

Coquerel’s sifakas live in social groups of between three and ten individuals, and the age and sex composition of the groups vary widely. Females are dominant to males, which gives them preferential access to food and the choice of with whom to mate. A home range of between 10 and 22 acres is maintained by wild groups. However, within this area, a core territory of five to eight acres is utilized over 60% of the time.

At the Lemur Center, sifakas are maintained in family groups.

As of 2018, Coquerel’s sifakas are classified as critically endangered in Madagascar and are threatened with increasing habitat destruction and the erosion of social customs against hunting this species. Learn more about the new IUCN Conservation Assessment for this species and others here.

The species is found only in the Ankarafantsika Nature Reserve and the Bora Special Reserve, and these dry, deciduous forests have both been damaged by yearly fires set by nearby farmers. Hunting of these animals by locals might occur in some areas, although in many parts of its range it is protected by taboo or fady.

Above: Coquerel's sifakas at the Duke Lemur Center.

Coquerel’s sifakas at the DLC make the most of their Natural Habitat Enclosures, showing off their graceful bipedal locomotion through the forest habitat.

Meet Beatrice and the keepers that care for our Coquerel’s sifakas and learn about the care required to make sure every delicate sifaka born at the Duke Lemur Center remains healthy through their infancy.

Send a lemur a present: You can send special treats to the DLC’s lemurs, as well as raw materials for us to construct special enrichment activities to keep them happy and healthy. Simply visit our amazon.com wishlist! In the image above, Pompeia's daughters, Francesca and Isabella, enjoy their new interactive feeders gifted to them from the wishlist - so fun!

Adopt a Coquerel's sifaka: Want to learn more about this species AND help support their care, not only here but also in Madagascar? Consider symbolically adopting Pompeia, a female sifaka, through the DLC’s Adopt a Lemur program! Adoption packages start at just $50. (Fun fact: Pompeia is the mate of Charlemagne, son of the famous Zoboomafoo!)