This visually striking species hails from the tropical forests of eastern Madagascar, where its thick, chestnut fur is well suited to the wet, sometimes chilly environment of the rainforest canopy. Weighing up to nine pounds (4.1 kg), red-ruffed lemurs are among the largest living lemurs and the largest pollinators in the world: as they feed, pollen sticks to the ruffs of fur around their faces and gets transported from tree to tree.

There is little variation in the ecology and behavior between the two species of ruffed lemur, or Varecia, housed at the Duke Lemur Center.

Female ruffed lemurs give birth to litters of infants. Unlike other lemurs whose infants cling to their bellies or backs, ruffed lemurs “park” their infants in nests while foraging. Mothers can have as many as six infants at a time, although litters of two to four are most common. Ruffed lemur families are highly vocal, and their raucous loud calls can be heard up to a half-mile away.

The red ruffed lemur is critically endangered in Madagascar, primarily due to hunting and habitat loss, and fragmentation. Threats include slash-and-burn agriculture (tavy) and illegal logging and mining, as well as natural disasters like cyclones. 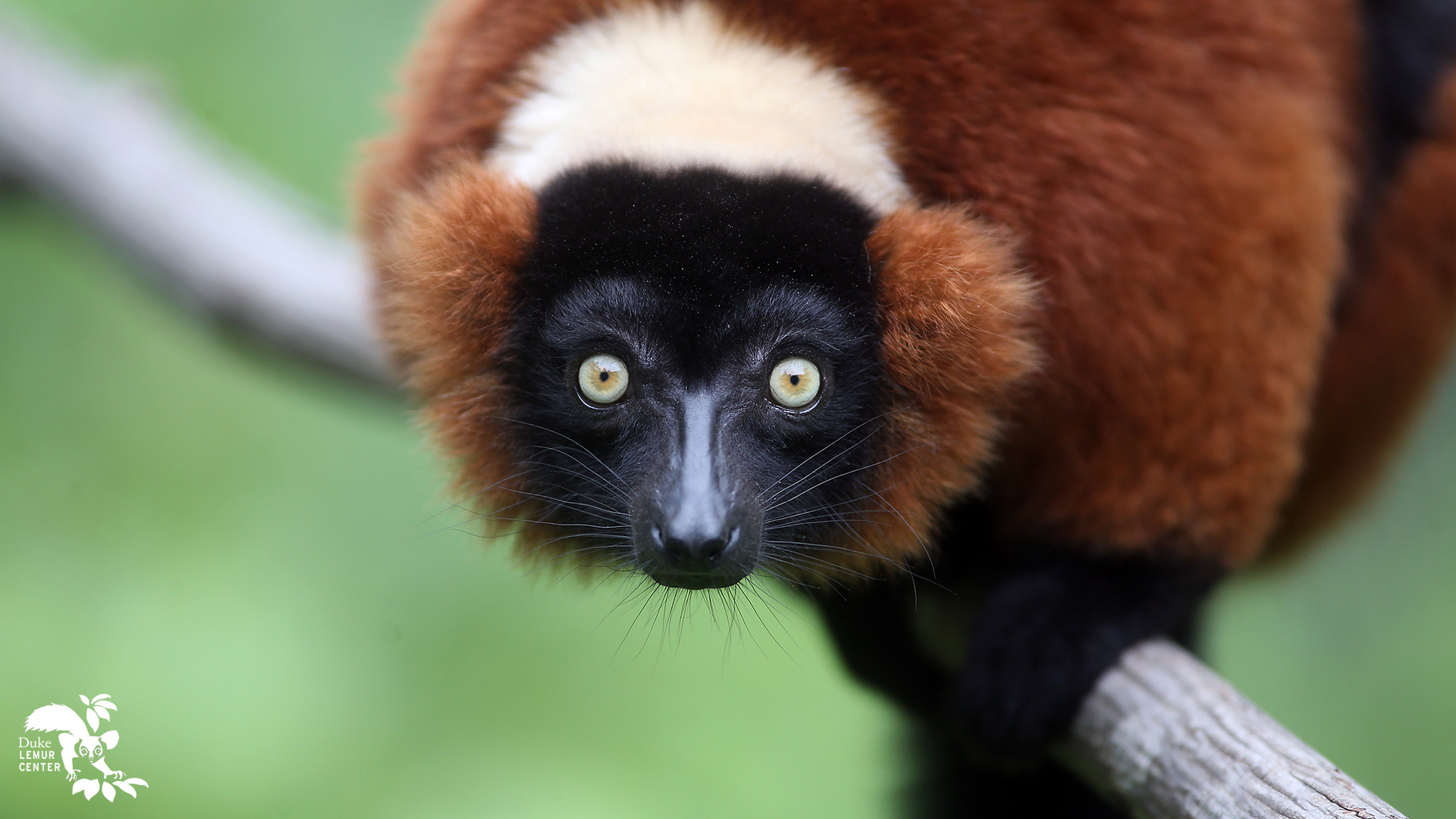 Social structure: male-female pairs (with offspring) and multi-male, multi-female communities depending on the season

Diet: specialized fruit eaters but will eat nectar and seeds if fruit is scarce

Mating: highly seasonal, infants are born in September and October in Madagascar and between April and May in North Carolina

Number of young: typically 2-3 per season 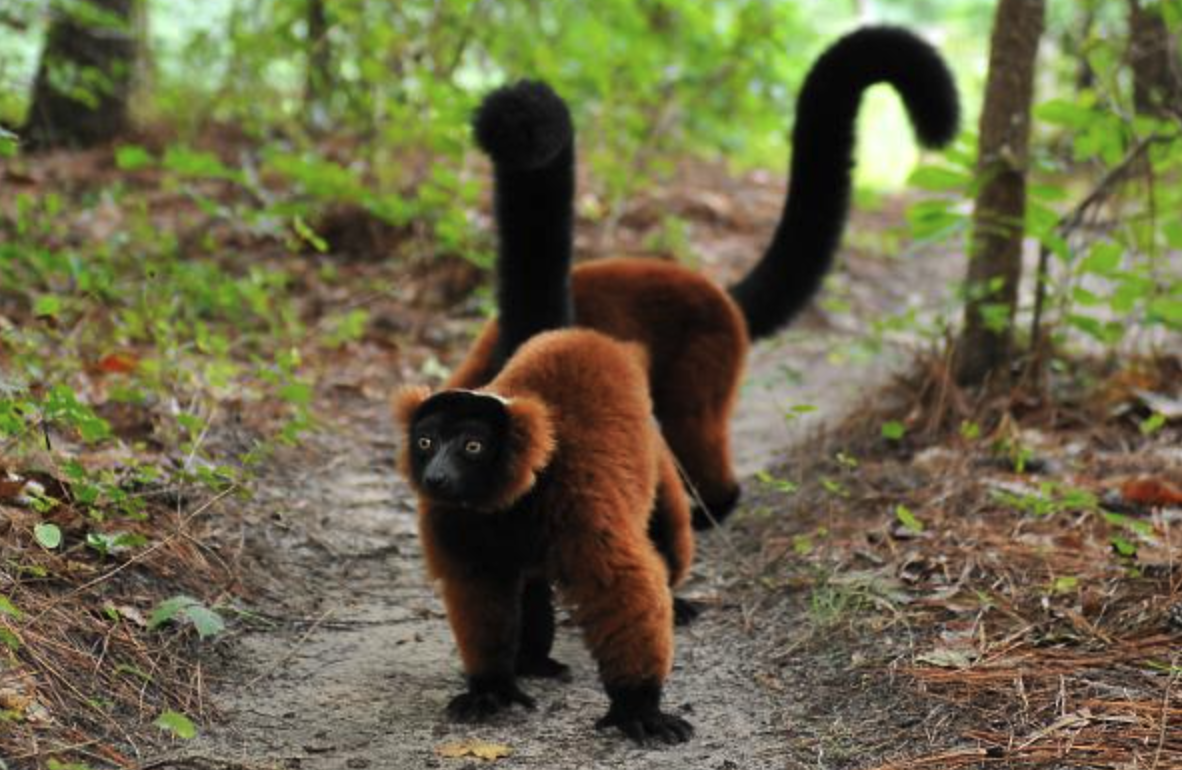 Ruffed lemurs are the largest quadrupedal lemur in Madagascar. Their bodies are around 20 inches (50 cm) long and their tails are slightly longer at around 23 inches (58 cm), which helps them balance as they move through the canopies of the rainforest.

Their diet consists mostly of fruit, nectar, and pollen–they are considered the most frugivorous of all the lemurs. As fruit-eaters, they play an important role as seed dispersers in Madagascar's rainforests: they can swallow large seeds, which pass through their guts undigested and are excreted onto the forest floor in their own packets of "fertilizer" (feces). When flowers are available, the lemurs eagerly feed on nectar by sticking their long noses deep into the flower. During this feeding, the flowers are not harmed, but the lemur’s snouts become coated with pollen, which is then transported to other flowers. Thus, for certain species of plants in the tropical forests of Madagascar, the ruffed lemur is an important pollinator.

Unfortunately, many of the larger fruit trees essential for the survival of the ruffed lemur are also regarded as the most desirable hardwoods by logging interests and are often the first to be cut down when a forest is selectively cut. Thus, the presence of healthy populations of ruffed lemurs is considered an important indicator of the health of a tropical forest. 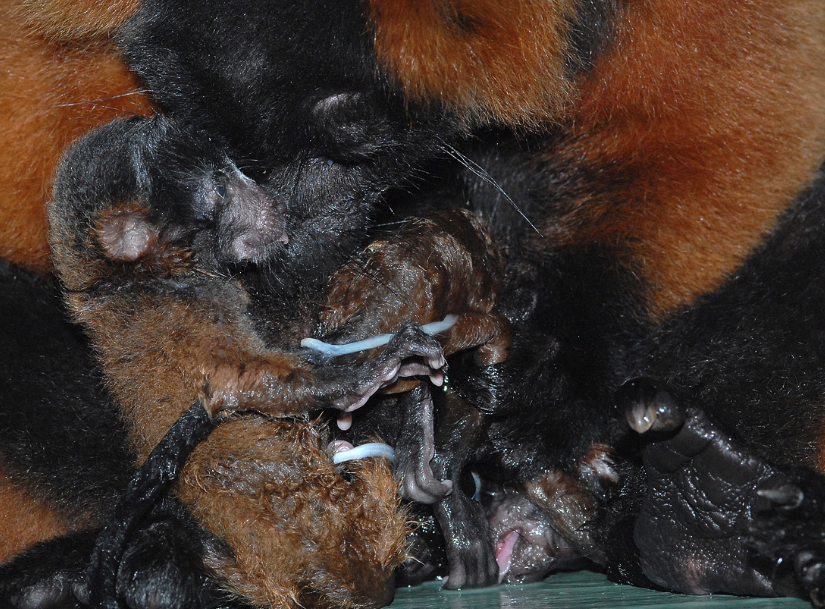 Ruffed lemur reproduction is highly seasonal. The animals breed in Madagascar between May and July, with most infants born in September and October after a 102-day gestation. In North Carolina, breeding usually occurs in December and January with births in April or May.

Unlike most lemurs, ruffed lemur females give birth to litters of up to six infants (two or three is more typical) in concealed, well-constructed nests 30 to 60 feet (10 to 20 meters) up a tree. Ruffed lemurs are the only diurnal primates in the world to keep their infants in a nest. Females can nurse up to six infants simultaneously.

Infant ruffs are not as well developed at birth as is typical for other lemurs, which is not surprising given the brief gestation period. At birth, infants are not capable of grasping the mother, so if she needs to transport them, she simply picks up one infant at a time in her mouth. Mothers generally move their infants away from the nest after a week or two, at which point they simply leave them parked in a tree while foraging nearby. In the days following birth, if the mother needs to leave the nest, the infant’s father will stand guard close by. Infants develop rapidly, and by three or four weeks they are capable of at least attempting to follow their mother on their own.

Red ruffed lemurs are diurnal, with peak activity occurring in the early morning and in the evening.

Ruffed lemurs appear to have a variable social system that changes depending on the season and the quality of their habitat. In some areas of Madagascar, the animals are found in small groups of two to five individuals, with a home range of around 60 acres (25 ha). In other areas, loose affiliations of between 18 and 32 animals occupy home ranges around 150 acres (60 ha) in size. All group members use a common core home range, and groups are occasionally aggressive towards other groups at the borders of these territories. There is a strong correlation between the location of home ranges and the location of the largest fruiting trees in the area. Females are the driving force in group dynamics and are always dominant to males. Ruffed lemurs will form larger groups during the wet season when food is plentiful, and disperse during the dry season in search of scarcer fruit. When foraging for fruit, large groups might fragment completely as individuals go their separate ways, which is in striking contrast to other diurnal lemurs which always forage and move through the forest together as cohesive groups.

Ruffed lemurs are among the most vocal of the non-human primates. Their raucous, barking vocalizations might serve several purposes: they allow distant members of the same group to maintain contact with each other even when they are foraging separately; they warn would-be competitors of territory already occupied; and they might also serve to alert other group members of the presence of an aerial or ground predator. Natural predators that can trigger alarms in Madagascar include boa constrictors, eagles and hawks, and the fossa (a weasel-like animal found only on Madagascar). One individual ruffed lemur can set off an alarm call that will alert even the farthest ranging group members.

Red ruffed lemurs are restricted to the forests of the Masoala Peninsula near Maroantsetra in northeastern Madagascar. They have been seen just east of the Antainambalana River, which divides their range from that of the black and white ruffed lemurs. Luckily, this range includes the 840-square-mile Masoala National Park, Madagascar’s largest protected area.

Principal threats to red-ruffed lemur survival are habitat loss and hunting.  Due to the ruffed lemur's large size and apparent need for intact primary forest, it is particularly susceptible to human encroachment and possibly selective cutting of the most precious hardwoods (such as rosewood). The most recent IUCN assessment places the red ruffed lemur, with its very limited range, in the critically endangered category because of the increase in illegal logging and hunting of ruffed lemurs in conjunction with logging camps inside Masaola National Park. The captive population is managed by a Species Survival Plan.

Above: red ruffed lemurs here at the Duke Lemur Center.

Painting is an enrichment activity that lets lemurs explore their creative side while encouraging foraging behavior in an environment that is different than what they usually experience. Watch as a family of red ruffed lemurs embrace their inner artists here.

Send a lemur a present: You can send special treats to the DLC’s lemurs, as well as raw materials for us to construct special enrichment activities to keep them happy and healthy. Simply visit our amazon wishlist! In the image above, our ruffed lemurs play with baby mirrors gifted to them from the wishlist - so fun!