Due to its bizarre appearance and unusual feeding habits, the aye-aye is considered by many to be the strangest primate in the world. It is the world’s largest nocturnal primate. Unusual physical characteristics include incisors that are continually growing (unique among primates), extremely large ears, and a middle finger which is skeletal in appearance, and is used by the animal as a primary sensory organ.

Additional information about the DLC’s aye-ayes — from our first imports to the present — can be found in our WINTER 2017 newsletter, devoted exclusively to these rare and amazing lemurs. Learn more about our newest aye-aye, Winifred, and watch video footage of her leaving her nest box for the first time here.

Written by David Haring, the DLC’s longtime registrar and photographer, the article “The DLC’s Founding Aye-aye Fathers (and Mothers)” discusses how the DLC unraveled the secrets of aye-aye husbandry in the 1980s — including what to feed these mysterious and, at the time, little studied lemurs.

On our YouTube channel, aye-aye videos can be found on our Research & Conservation and Meet the Lemurs playlists.

About Aye-ayes
Adopt an Aye-aye 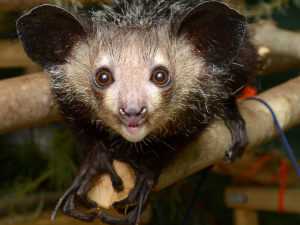 Want to learn more about aye-ayes AND help support their care and conservation not only here but also in Madagascar? Consider symbolically adopting Agatha the aye-aye through the DLC’s Adopt a Lemur Program! Your adoption goes toward the $8,400 per year cost it takes to care for each aye-aye at the DLC, as well as aiding our conservation efforts in Madagascar. You’ll also receive quarterly updates and photos, making this a fun, educational gift that keeps giving all year long!

Habitat: widely distributed in the forests of eastern and western Madagascar

Number of young: one offspring every 2 - 3 years

Aye-ayes are the most unusual looking of all lemurs. They are the world’s largest nocturnal primate at around 15 inches long (38 cm) with a fluffy tail that is longer than their bodies. They are covered in thick dark fur with white guard hairs they can raise when agitated or excited to make themselves appear larger. Their fingers are long and their third finger is thinner than the others, helping them and eat their larvae-based diet. 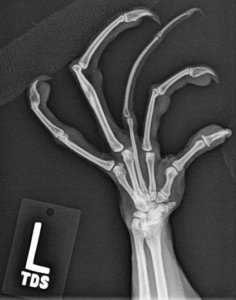 Pictured above: The aye-aye's long, thin middle finger is essential for locating and "hooking" insect larvae for the aye-aye to eat. Click the image for a larger view.

The aye-aye’s diet is highly specialized, consisting almost entirely of invertebrates with some nuts and seeds (see Sefczek et al. 2020). The animals are also known to raid coconut, lychee, and mango plantations.

Since a significant percentage of an aye-aye’s diet consists of insect larvae that dwell inside dead or living trees, the animals have evolved a specialized method for locating the larvae, called tap foraging. As they walk along a branch, the animals continuously and rapidly tap it with their middle finger. Cupping their huge ears forward, the aye-aye listens intently to the echoing sounds coming from the tapped tree. When the sound indicates they are above an insect tunnel, the animals begin to tear off enormous chunks of the outer bark with their impressive teeth.

Then the aye-aye inserts its slender and highly flexible third finger into the hole, and when the prey is located, it is hooked with the tip of the finger and removed.

Click HERE to see Agatha, a five-month-old infant aye-aye, learning how to tap-forage from her mom, Medusa.

Unlike other lemurs, aye-aye breeding can occur at any time of year. The first recorded birth of an aye-aye in human care was Blue Devil in 1992, whose mother, Endora, was captured in Madagascar while pregnant.

Angelique, born at Duke in 2005, was the first aye-aye ever born to parents who themselves were born in human care. Merlin, “who was clueless and knew nothing about breeding,” had to be coached for two years by Duke staff before breeding successfully with Ardrey to produce Angelique. The experience “taught the center’s primatologists an invaluable lesson — that the complex creatures need socialization to mate.”

In the wild, infants are weaned as early as 7 months, but they will continue nursing as long as they remain with their mothers and do not have any younger siblings. In human care, females give birth every 2-3 years. Aye-aye females reach sexual maturity at around 2 years old. The gestation period is, on average, 172 days.

Learn more about Ardrey’s pregnancy with Elphaba in Jason Bittel’s “What I learned from hanging out with lemurs” (2014).

Aye-ayes are nocturnal, solitary foragers who spend up to 80% of the night feeding and traveling through the forest canopy. While the majority of their time is spent in the trees, traveling on the ground is reasonably common. Males have huge home ranges, between 250 to 500 acres (100 and 200 ha), while the home ranges of females are much smaller, usually between 75 to 130 acres (30 and 50 ha). A male’s territory may overlap with that of several different males, and although encounters between neighboring males are rare, they may be hostile. Female ranges do not overlap with those of other females, but they always overlap that of at least one male. Aye-ayes sleep in elaborate tree nests during the day, with different animals using the same nest on different days.

Wild aye-ayes spend most of their lives alone. The only social interactions occur during courtship and when an infant is dependent on its mother. During these interactions, females are considered to be dominant over males, giving them preferential access to food. In human care, however, a male/female pair and their single infant might coexist peacefully for years.

When aye-ayes get excited or agitated, their long, mostly white guard hairs stand on end and give the poofed-up lemur the appearance of an animal twice its actual size! This adaptation may have evolved as a strategy to make the aye-aye look more threatening to would-be predators, but it can also be seen at times when the animal is not being threatened. For example, our animal care technicians have reported seeing it during play behavior between a mom and an infant or juvenile, and it can also be observed in instances similar to those of Grendel (pictured below): he just moved into a brand new room and, although the size and shape of the new room were exactly the same as the old, the layout of branches and many of the smells were totally different. At first, Grendel just wasn't sure what to make of it. 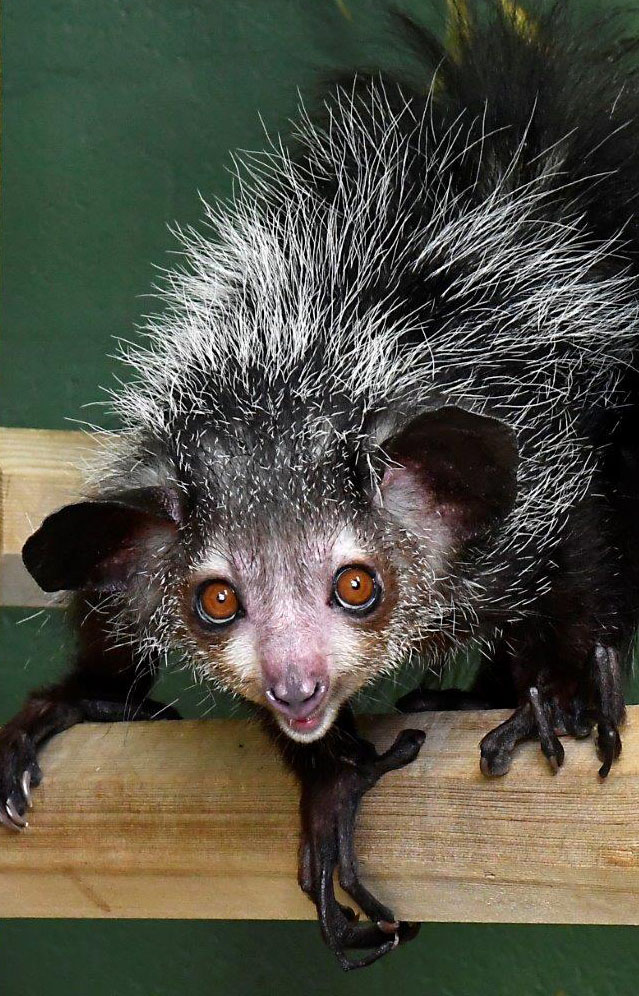 Once considered one of the most endangered mammals in the world, the aye-aye has in recent years been shown to be much more widely distributed than originally thought. This is due to the fact that recent years have seen an influx of researchers into Madagascar, including those specifically looking for this rare and elusive animal. Current findings indicate that the aye-aye is distributed along the east coast and in the northwestern forests of Madagascar but as the population is not dense, seeing one in the wild remains incredibly rare.

The main threats to the survival of the aye-aye are loss of habitat and hunting pressure. Unlike many lemur species that are hunted for food, aye-ayes are sometimes killed as crop-threatening pests in agricultural areas, and because their bizarre appearance has traditionally led many villagers to regard the animal as an evil omen, or fady, which must be killed on sight to avoid bringing bad luck onto an entire village. Aye-ayes are found in at least 16 protected areas, and several of these locations appear to have healthy populations of this lemur.

Worldwide, the population of aye-ayes in human care stands at about 50. In the United States, nine reside at the Duke Lemur Center and 14 are held at six additional AZA institutions. Overseas, the Bristol Zoo, London Zoo, Paris Zoo, Tokyo Zoo, and Frankfurt Zoo house aye-ayes that descend from the DLC’s founding eight. Aye-aye breeding has occurred at the Durrell Wildlife Park in the Jersey Islands.

An aye-aye pedigree chart can be viewed HERE.

Watch two aye-ayes, Ardrey and her daughter Elphaba, using the same process to eat eggs as they would to locate and eat insect larvae that dwell inside trees. First, they tap, then they chew, and finally, they use their long flexible middle fingers to dip into and remove the yolks of the eggs. When they finish, the delicate eggshells remain fully intact, except for the small hole created by the aye-ayes’ strong front teeth!

Watch Angelique add fresh bamboo to her nest box, selecting the perfect branches from her outdoor enclosure to add to the structure she is building inside.

On our YouTube channel, additional aye-aye videos can be found on our Research & Conservation and Meet the Lemurs playlists.

Adopt an aye-aye: Want to learn more about aye-ayes AND help support their care, not only here but in Madagascar? Consider symbolically adopting Agatha, a young female aye-aye, through the DLC's Adopt a Lemur program! Adoption packages start at just $50. To adopt Agatha now, please visit the Adopt a Lemur homepage or click on the Adopt an Aye-Aye tab at the top of this menu!

Send an aye-aye a present: You can send special treats like coconuts to the DLC's aye-ayes, as well as raw materials like fleece and cardboard for us to construct special enrichment activities to keep them happy and healthy. Simply visit our amazon wishlist! Aye-ayes in particular love coconuts and coconut milk, nut butters, tamarinds, sugar cane, and any of the fun treats labelled "aye-aye enrichment item."

Spread the word: Last spring, seven-year-old Hailey wrote to us asking if we’d consider posting her best drawing of an aye-aye – her favorite animal in the world – so others could learn more about these amazing lemurs and why it’s important for us to save them.

Thank you so much, Hailey, for helping the DLC save lemurs! Your love for aye-ayes and your desire to teach people about them is inspiring, and it means so much to us. You’ve already made a positive difference, and you’re just getting started! 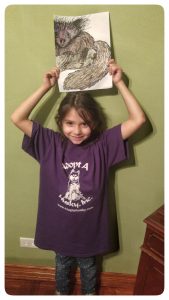 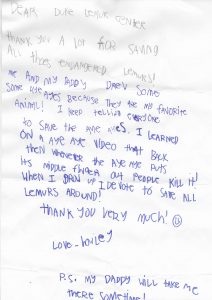 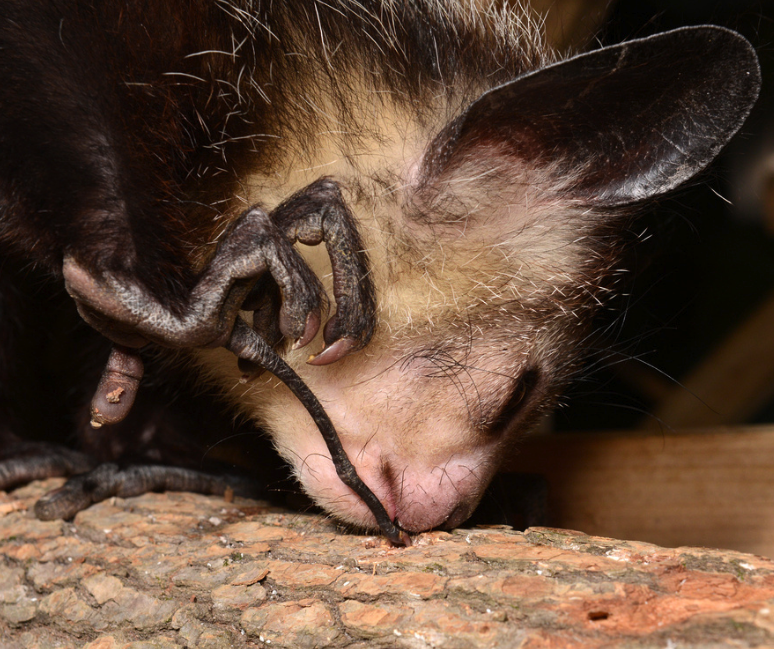 Elphaba investigates a log, which has just been placed in her enclosure, by tapping on its surface. With their keen sense of hearing, aye-ayes can tell when they are tapping over a hollow spot which might indicate the presence of an insect tunnel below. They then use their strong incisors to rip open the log, eventually revealing the insect’s tunnel. At this point the aye-aye’s incredibly flexible middle finger is inserted into the tunnel and the insect extracted and eaten!