Crowned lemurs are named for the triangular, crown-like patch of fur on their foreheads. Like the blue-eyed black lemur, crowned lemurs are sexually dichromatic: males and females have different coloration. Female crowned lemurs are predominantly gray with an orange “tiara,” whereas males are a much darker reddish-brown with a larger black and orange “crown.” Until recently, crowned lemurs were thought to be a sub-species of the mongoose lemur. 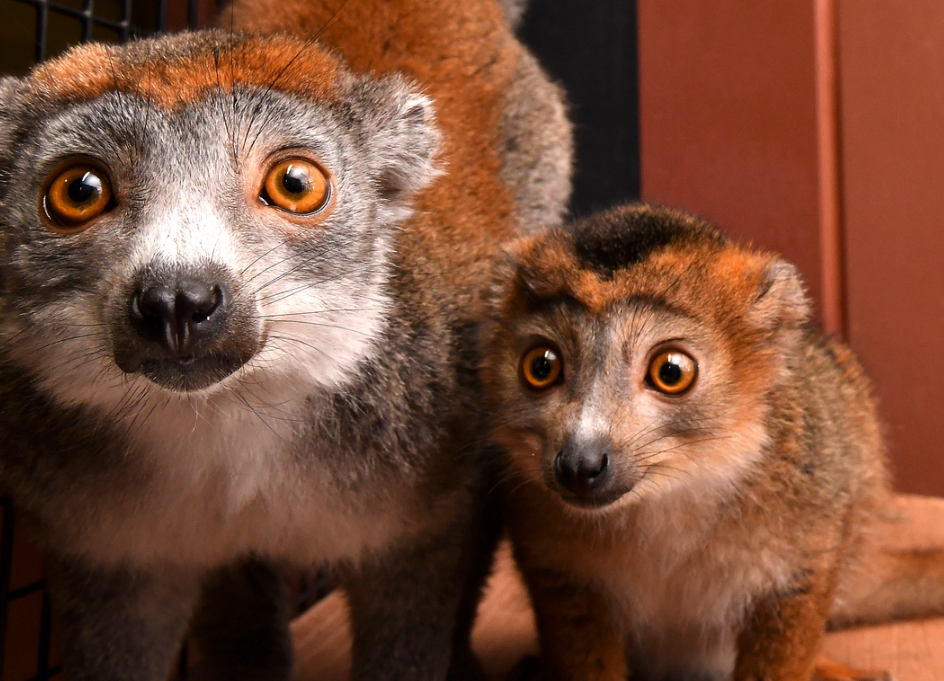 Want to learn more about crowned lemurs AND help support their care and conservation not only here but also in Madagascar? Consider symbolically adopting Sanura, a female crowned lemur, through the DLC’s Adopt a Lemur Program!

Your adoption goes toward the $8,400 per year cost it takes to care for each lemur at the DLC, as well as aiding our conservation efforts in Madagascar. You’ll also receive quarterly updates and photos, making this a fun, educational gift that keeps giving all year long!

Mating: highly seasonal, infants are born in September and October in Madagascar, April through June in North Carolina

Number of young: 1-2 per season 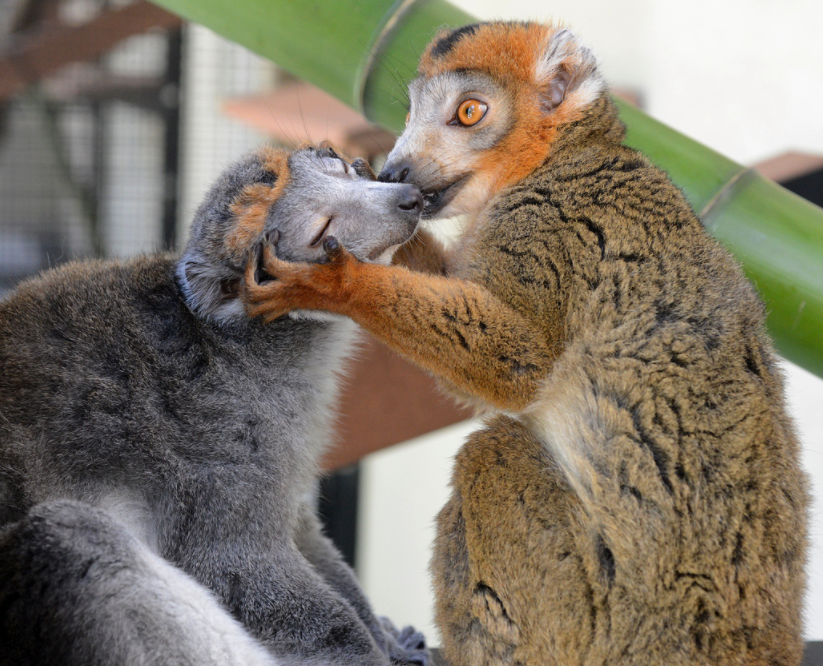 Crowned lemurs are noticeably sexually dichromatic and the males and females of this species show different fur patterns. Female crowned lemurs are predominantly gray with an orange "tiara" on their foreheads, whereas males are a much darker reddish-brown with a black and orange crown.

Although the diet of wild crowned lemurs varies with the seasons, it contains a high percentage of fruit with relatively few leaves. During both wet and dry seasons in Madagascar, fruit comprises as much as 80% to 90% of the crowned lemur diet. Crowned lemurs often forage in scrubby bushes and short trees, and routinely come to the ground. In dry areas, the animals may venture deep into caves in search of water. 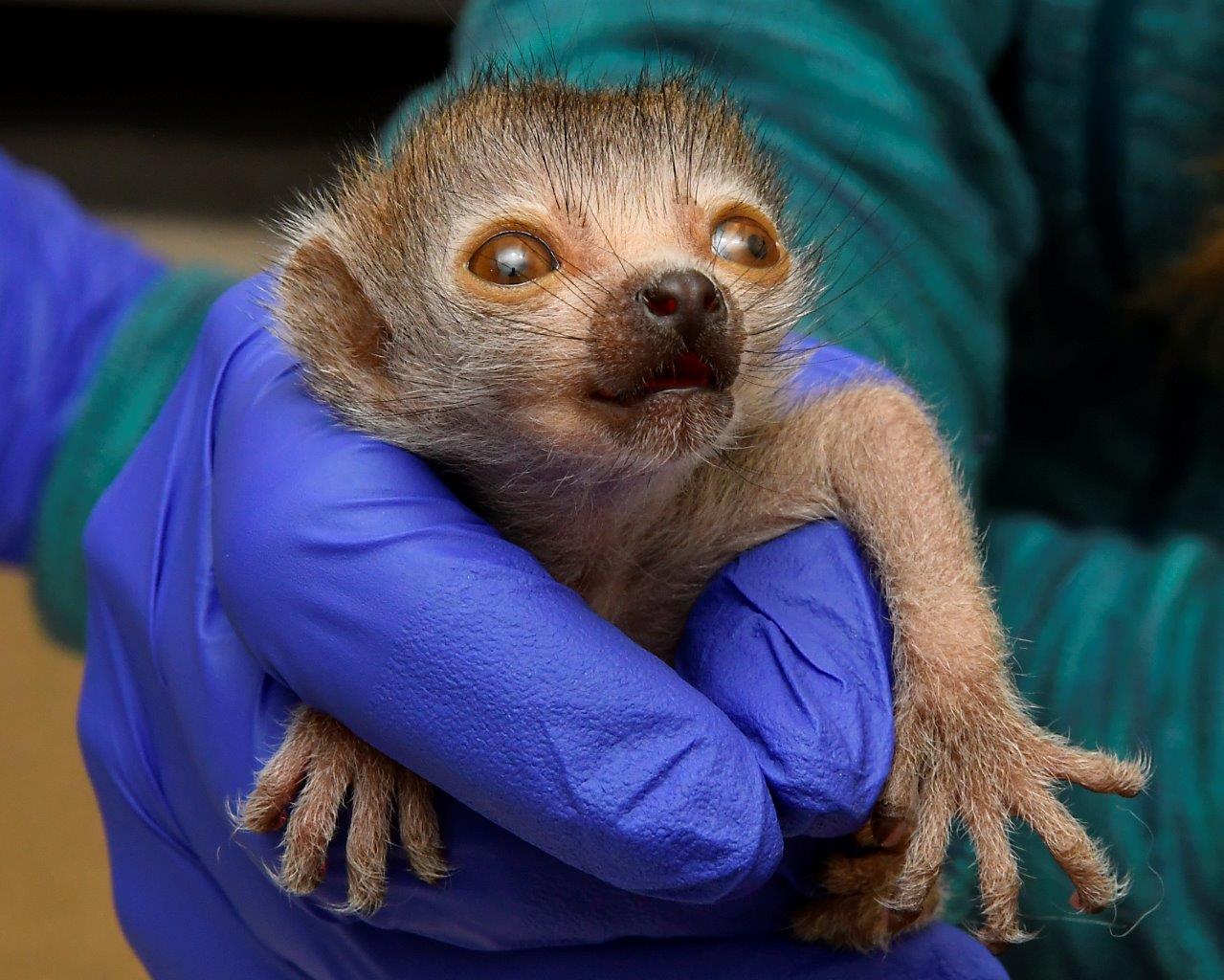 Births at the DLC occur April through mid-June (mid-September through October in Madagascar), with gestation being about 120 to 128 days. Births in Madagascar coincide with the start of the rainy season. Singletons and twins appear to be equally common. Infants are initially carried on the mother’s belly but switch to her back when they are a couple of months old.

Sexual maturity is estimated to be reached at around 20 months of age. 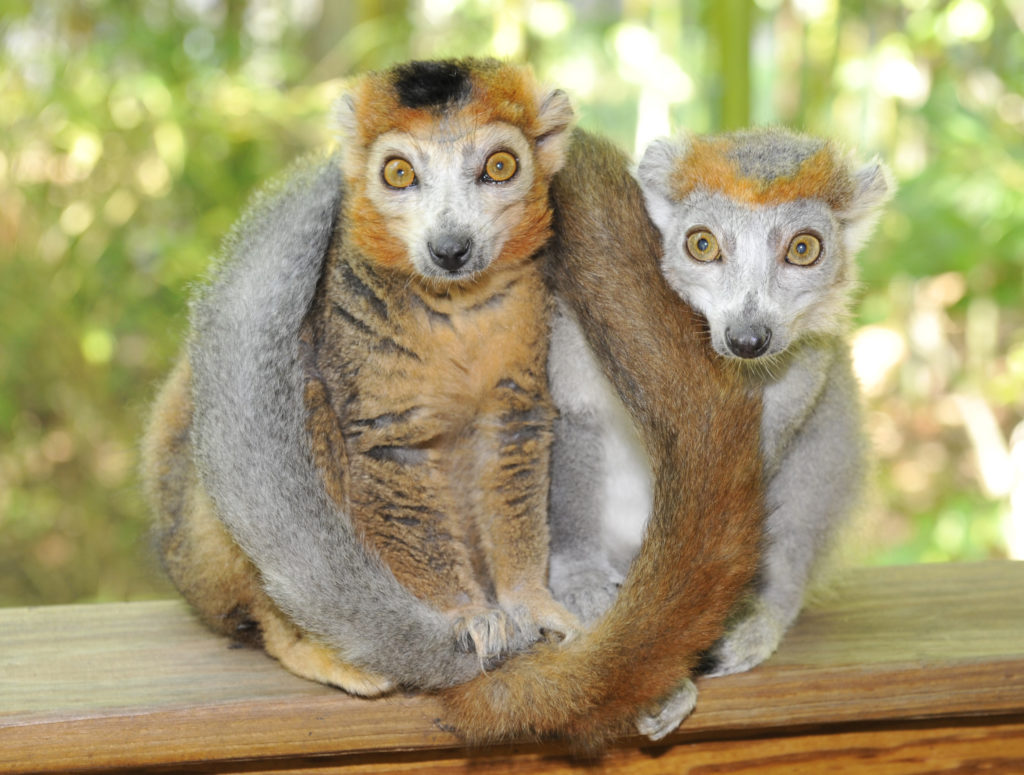 In the wild, crowned lemurs travel in all levels of the forest, but seem to prefer the canopy level. They readily descend to the ground to eat fallen fruit, lick or eat dirt, or travel. The animals are found in groups ranging in size from five to up to 15 animals (groups of five to six are the norm), with adults of both sexes present. Although the animals are more active during daylight than night, researchers have found that there is usually a nighttime activity period lasting up to two hours.

Large groups often break up into foraging subgroups of one to four animals. Such subgroups use vocalizations to maintain contact with or to locate other subgroups when separation distances are large. Such vocalizations, described as “piercing yaps,” can often be heard between groups at the DLC.

When presenting a rose, you usually don’t want the recipient to tear it to pieces! Our flower-devouring crowned lemurs, however, show their appreciation for their keepers by making full use of the tasty treat.

Animals at the DLC receive daily enrichment and are curious about new structures and objects that find their way into their enclosures. Sometimes these novel objects include recording devices. Nedjem and Sanura are ready for their closeup!

The crowned lemur is a mostly diurnal lemur with a very limited range in the northern tip of Madagascar. They are sympatric throughout most of their range with Sanford’s lemur (Eulemur fulvus sanfordi).

They prefer drier forests, existing in higher densities in these habitats than in adjacent humid forests. In fact, the crowned lemurs may be found in the more humid areas only because they have been forced out of their preferred dry habitat by human interference. Crowned lemurs generally feed lower in the forest than Sanford’s lemurs, which may help avoid aggressive interactions between these two species. In addition, crowned lemurs are the only species of lemur that will forage in the tsingy, an area of jagged limestone rock formations.

The area of suitable habitat remaining in Madagascar for crowned lemurs is probably less than 500 square miles (1300 square kilometers) in the far northern tip of the island, and this is shrinking rapidly due to the encroachment of slash and burn agriculture. Total population estimates range from 1,000 to 10,000 animals. As populations of this lemur become more and more patchily distributed in forest fragments, genetic interchange between the fragments becomes increasingly difficult or impossible, thus increasing the likelihood of extinction.

Four reserves in Madagascar protect the crowned lemur; however, even in the reserves, the animals are hunted by the local people for food (they are also popular as pets), as the borders of the preserves are poorly guarded. In one reserve, Montagne d’Ambre National Park, poaching is widespread and growing. Like most lemur species there is a strong need for biological surveys to be undertaken to determine this lemur’s distribution, and for more reserves to be created.

Adopt a crowned lemur: Want to learn more about crowned lemurs AND help support their care and conservation, not only here but in Madagascar? Consider symbolically adopting Sanura, a female crowned lemur, through the DLC's Adopt a Lemur program! Adoption packages start at just $50. To adopt Agatha now, please visit the Adopt a Lemur homepage or click on the Adopt a Crowned Lemur tab at the top of this menu!

Send a lemur a present: You can send special treats to the DLC’s lemurs, as well as raw materials for us to construct special enrichment activities to keep them happy and healthy. Simply visit our amazon wishlist!

Visit the Duke Lemur Center: The DLC is only partially funded by Duke, so we rely heavily on revenue from tours to help pay for lemur care and housing as well as our conservation work in Madagascar. So, something as simple and fun as visiting the Lemur Center can help us help the lemurs! Just be sure to make tour reservations in advance.