The Story of Vanilla

Despite its reputation for being plain, the story of vanilla is anything but boring. In fact, vanilla can be a matter of life and death in the SAVA region of Madagascar, where the growing, processing, and selling of precious vanilla beans is a fragile livelihood. 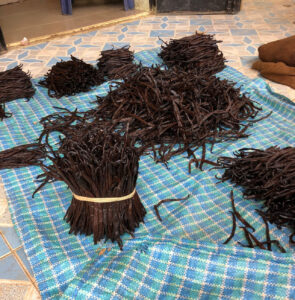 The story of vanilla, or the Vanilla planifolia species, begins in the southwestern forests of Mexico. In its home country, the vanilla flower, a pale-yellow orchid, is primarily pollinated by the Melipona bee, another native of Mexico. Vanilla is very particular about its pollination; each flower must be pollinated within its 24-hour blooming period or the flower will die and fall off. All of the flowers could bloom on a different day, at a different time, so it keeps the Melipona bees very busy. If it is successfully pollinated, the flower will grow into the long beans or pods that are then dried and cured to be sold. When European colonists came to Mexico, they brought cuttings of the vanilla vine back with them across the Atlantic and tried to establish their own vanilla bean propagation. Without the little Melipona bee along for the ride, however, they were out of luck. 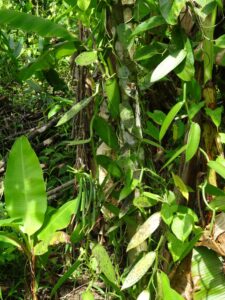 A thriving vanilla orchid in Madagascar

The solution to the pollination problem came down to manual labor. Edward Albius, a 12-year-old enslaved boy from Réunion, discovered a hand-pollination method after French colonists introduced vanilla to Madagascar and the surrounding islands in the 1800s. While no other pollinators in these European countries seemed up to the task, a thin stick or other delicate instrument could be used to painstakingly hand-pollinate each vanilla orchid during its short blooming period. Since then, Madagascar has become the plant’s primary exporter, sourcing about 80% of the vanilla consumed around the world – all pollinated by hand! 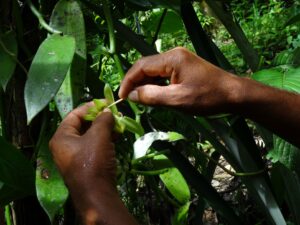 Currently, most of the vanilla in Madagascar is grown in the SAVA region, a northeastern tropical forest area which experiences high annual levels of rainfall. High in biodiversity, the SAVA region boasts some of Madagascar’s most famous and beloved flora and fauna. Unfortunately, the main agricultural system in Madagascar is a method of slash-and-burn land clearing to create rice paddies. Rice is the primary food crop grown in Madagascar, but unlike vanilla, rice is grown not for commercial sale but as a subsistence crop, to feed local families. Slash-and-burn agriculture contributes to deforestation and habitat loss in Madagascar, which not only endangers the wildlife population, but can also have negative effects on the farmland itself. The vanilla plantations of the SAVA region hold a particular interest for conservationists, since deforestation is not necessary to grow vanilla. 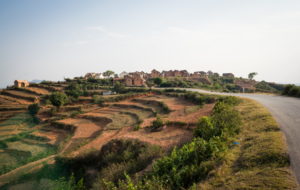 As a vine, vanilla orchids must be grown on existing structures like posts, fences, or tree trunks. Agroforestry efforts to grow vanilla in forest areas or forest-adjacent areas prove valuable to conservation, as these low-impact plantations can support Madagascar’s natural biodiversity while still producing valuable crops. Studies show that plant diversity flourishes in vanilla plantations close to forest areas, and endangered lemur species can use these areas as corridors between forest fragments, which helps to maintain gene flow and supports a healthier population.

The rainfall in the SAVA region makes for lush habitats, flourishing plant life, and ideal growing conditions for the vanilla plant, but monsoons can easily destroy entire vanilla farms overnight, raising prices and making it more difficult for vanilla farmers to make their living. Global climate change creates additional challenges for vanilla farmers as the increasing number of extreme weather events can easily decimate their delicate crops. After planting, the vanilla vine takes about 3 years to begin producing flowers, and even after the labor-intensive process of hand-pollinating each orchid, it takes another 9 months for the pods to mature. This labor of love is worth it more often than not, as vanilla pods can sell for up to $300 per pound. 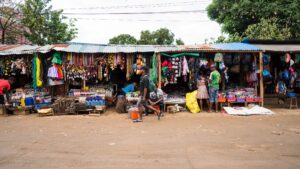 The aroma of vanilla permeates open-air markets of the SAVA region, like this one in Sambava.

But the high economic value of these precious pods can make vanilla farms a target. Crop stealing is commonplace, and can be met with punishment from the law or violent defense from the farmers themselves. In some cases, vanilla can truly become a matter of life and death.

While Madagascar vanilla is a coveted, complex, and costly aromatic, only up to 1% of vanilla-flavored products are made from vanilla beans. Most of the vanilla that we consume is a synthetic product made of compounds that create the flavor we recognize. The high cost of vanilla, especially in difficult growing years, may cause more of a shift to synthetically produced vanillin, which could mean even more trouble for vanilla farmers in Madagascar. 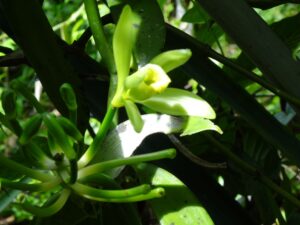 The flower of the vanilla orchid, where the pod will sprout and grow once pollinated

The story of vanilla, from the forests of Mexico to the grocery store freezer section, also tells us a story of global connection, and the complexity behind our food sources. Now more than ever, the choices that we make as consumers can have enormous impacts on the lives of people halfway around the world, not to mention on their surrounding natural ecosystems.

If you’d like to learn more about the story of vanilla in Madagascar, we recommend checking out our sources for this article: