How the sapphire trade is driving lemurs toward extinction 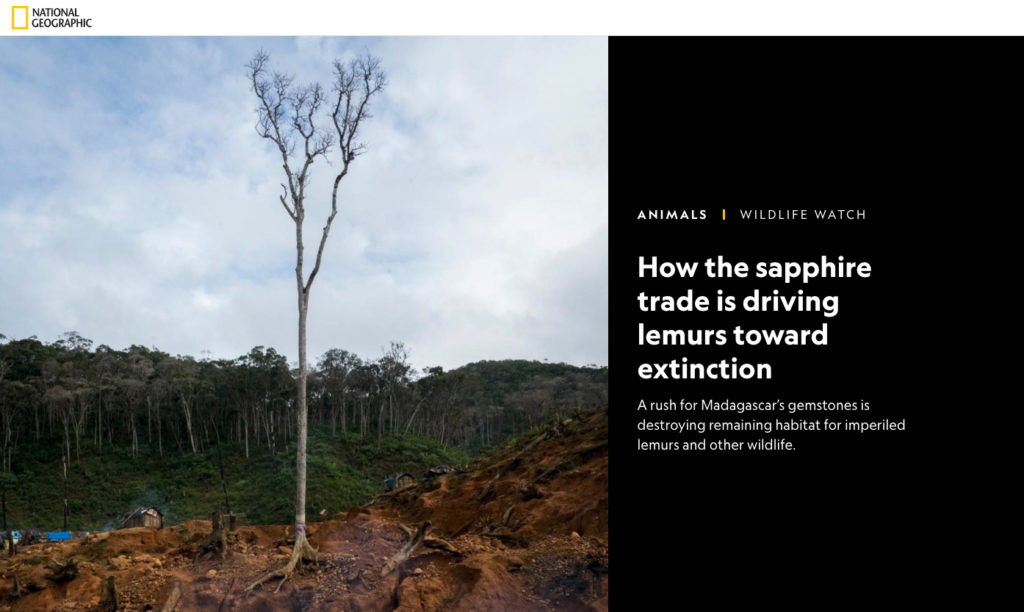 You may have seen news of the out-of-control sapphire mining in recent years in eastern Madagascar and its impact on forests and lemurs, but here is a relatively recent write-up by National Geographic: “How the Sapphire Trade Is Driving Lemurs toward Extinction: A rush for Madagascar’s gemstones is destroying remaining habitat for imperiled lemurs and other wildlife.”

Sapphire mining is an important driver of forest destruction in Madagascar. As this article states, “most of the gem mining is done illegally on reserves… [that] don’t receive anywhere near adequate protection on the ground.”

The sapphire exploitation area discussed in the article, in the “protected” zone called the Ankeniheny-Zahamena Corridor (CAZ), is in an area where the DLC’s Conservation Coordinator, Charlie Welch, participated in a USAID Madagascar project with Dr. Sarah Karpanty (Virginia Tech) in 2005, investigating a massive illegal logging operation by a Malaysian construction company that had the contract for building a road from Moramanga to Ambatondrazaka. The Malaysian company was supposed to be ONLY building a road, but decided that the nearby forest offered other opportunities. The company slipped in heavy logging machinery through the port at Tamatave, mixed in with the road construction equipment. The infraction (in the western part of the eastern rainforest) was discovered by then President Ravalomanana when flying in his helicopter between Tamatave and Tana – not hard to see as it was a huge gash right through full forest, even later visible on satellite photos. Welch and Karpanty discovered a massive logging road had been bulldozed through the mountains and primary forest, and the company was harvesting timber on both sides, completely illegally. Although the Malaysian road-building company was expelled from Madagascar, Welch and Kapranty’s major fear was that even though the mechanized logging was halted, that with the forest open now to such easy access, something like a mass mining or other forest exploitation (or both!) was going to occur. Unfortunately, it did.

How can you make a difference? Before purchasing, ask where your stone was mined, and buy only from jewelers who are committed to ethical sourcing. Or consider heirloom or antique stones: vintage jewels can be reset to make a modern necklace or ring, and don’t perpetuate current illegal mining operations. For additional tips, click here.