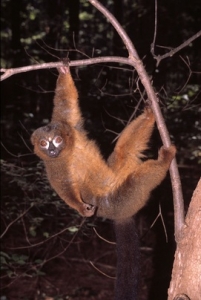 Diet: fruit, flowers and a wide variety of leaves

Mating: extremly seasonal, infants are born in September and October in Madagascar

Number of young: one per year

Red-bellied lemurs are medium-sized, measuring a little over a foot long (35 cm) and weighing between three and five pounds (1.6 – 2.4 kgs). They are slightly sexually dimorphic. While males and females have the same color fur on most of their bodies, females have cream-colored bellies and males have more pronounced white, tear-drop-shaped patches under their eyes. Males may also have bushy cheek hair, making their heads appear larger than females’.

The diet of the red-bellied lemur is primarily fruit, flowers, and leaves. The species they feed on vary with the seasons and they have been recording eating leaves of more than 70 plant species. During the dry season, they may also eat insects. They are an important seed disperser in the rainforests they live in.

In the wild, infants are born at the beginning of the wet season in October. Infants cling to their mothers’ bellies for the first 3 weeks, shifting only to nurse. At approximately 5 weeks of age, the young lemurs will take their first tentative steps away from their mothers. With this hint of independence, infants begin to taste solid food, sampling bits of whatever the other members of their group are eating. Nursing continues, in a steady decline in importance in the infant’s diet, until the infant is weaned at approximately 5 – 6 months of age. Red-bellied lemur infants will be carried by both their mother and father for the first five weeks of their lives. As they get older, females will refuse to carry the infant, though they can still catch a ride with males as they grow.

Groups of red-bellied lemurs usually consist of an adult breeding pair and their offspring. These groups of two to ten individuals travel and feed together throughout their home range. Each family’s range is estimated to be 30 – 37 acres (12 – 15 ha).

Red-bellied lemurs are found in a large continuous section of rainforest in Eastern Madagascar. Their range extends from northern to southern Madagascar and they have been found in altitudes of up to 8,000 feet (2400 m). Even though they may live in such a large range, their population is not as dense as other lemur species. They are frequently found only in primary forests and are threatened by increasing deforestation and fragmentation.  The population is listed as vulnerable by IUCN.

Since this species is not as endangered as other lemur species, the decision has been made to stop breeding them in human care. As our one remaining individual Cheyenne, has aged, she has lived with a number of individuals from other species. Her quest for companionship was documented in the New York Times along with photos and video footage.