“My Mommy Told Me So”: My research with Agatha and Medusa

What do aye-ayes and prison-grade cameras have in common? Both feature prominently in David Watts’s research on the DLC’s most-watched mother-daughter duo.

David Watts studies aye-aye communication, including how mother aye-ayes communicate with their offspring. In addition to helping the vet staff monitor Agatha’s health during the first weeks of life, David’s cameras hidden in the aye-ayes’ nest boxes have offered a fascinating window into the everyday interactions of mom and infant. Recently he has watched Medusa teaching Agatha how to jump, or at least Agatha trying to learn by watching momma; and that mother and infant are constantly playing chase, where they seem to take turns as to who is “it.”

I’m very fortunate to have the opportunity to study aye-ayes at the Duke Lemur Center. I first learned about these fascinating prosimians while enrolled in a primate course at NC State University. I was awestruck. I had never seen such a creature in my life! Here was an animal with so many unique features, any one of which would be captivating in itself; and it was a primate! I can even remember asking the person next to me, “How do you pronounce its name again?” It was sensory overload for me.

Trying to temper my excitement, I began learning as much as I could about this species. True to any topic being researched, the more I dug into the available literature, the more questions were raised. When I approached my professor with those questions, she suggested I develop a research project on aye-ayes. With her help and with the support of the DLC, I designed and received approval for a project investigating how aye-ayes communicate with one another.

Medusa taps at the chew-proof protective enclosure surrounding the camera.

As data collection for the first part of the communication study was winding down, I was told about Medusa’s pregnancy. My mind started to race: Think of the possibilities for research that could be done during her pregnancy and the birth and rearing of the infant aye-aye! Given that aye-ayes give birth only once every two or three years, and that the last aye-aye birth at the DLC was in 2011, I knew this was an opportunity I couldn’t pass up. Immediately I began planning ways to collect as much information as possible throughout the entire process.

To record the new data, I placed five video cameras and three microphones in Medusa’s room, including one camera and one highly sensitive microphone in each of her nest boxes. Thanks to these, I can monitor the entire area and zoom in on any activity.

The cameras in the nest boxes were designed by a company specializing in equipment used in difficult situations. They offer cameras that are explosion-proof, weather-proof, and – suitable for my needs – human primate-proof!

Normally, the primate-proof cameras are installed in prisons and mental institutions to monitor humans who may be apt to take down and destroy the camera equipment. Thankfully the aye-ayes are not like troubled humans, but they ARE very curious and will use their ever-growing front teeth to chew into anything to see what is inside it.

The aye-ayes’ insatiable curiosity was, and still is, in the front of my mind as I planned what equipment to place in their environment. Luckily for me, these cameras and their stainless-steel enclosures have fit the bill – even though Medusa does check them out occasionally! For the most part, though, she and Agatha have been going about their lives without paying any notice to the equipment. 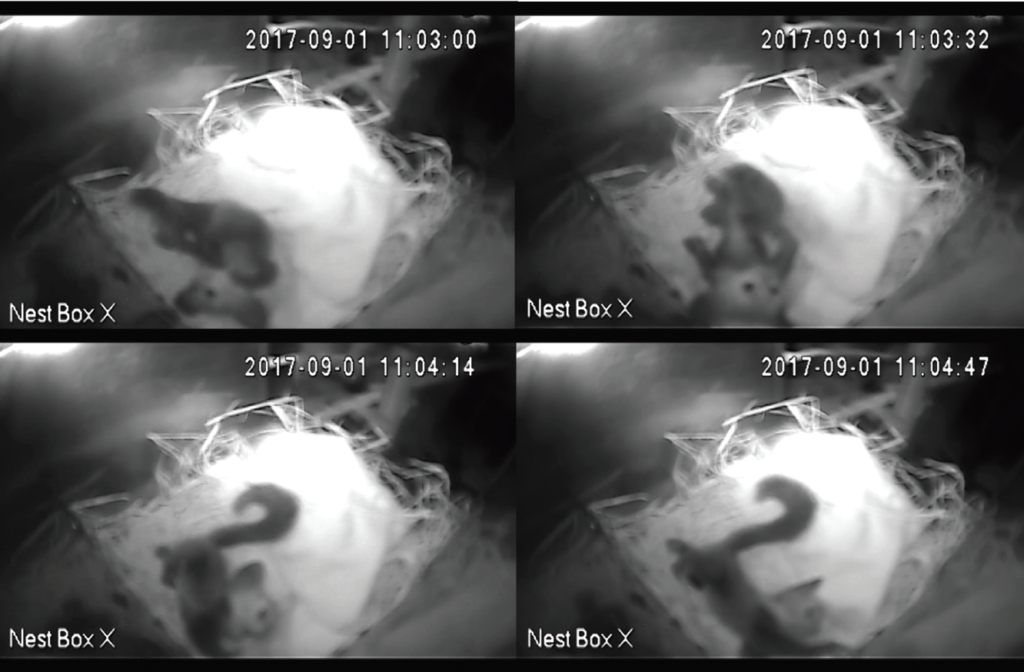 These past few months I’ve watched Agatha grow and learn how to be an aye-aye, thanks to the wonderful instruction she’s received from her mother. One of the sweetest sounds I’ve ever heard was the first sound Agatha made just after she was born. I don’t have children of my own, but hearing those initial vocalizations brought me to tears, a feeling I can only assume that parents have when they hear their child’s first cries. I guess I’m just an excited uncle.

My personal feelings aside, I’m happy to be able to help others learn more about these awesome primates, and I hope my research can be used to help keep these little guys around in the wild long into the future!