This winter, specialists from Triangle Veterinary Referral Hospital in Durham, NC assisted veterinarians at the Duke Lemur Center in the diagnosis and removal of rare cystine stones in the gallbladder of Junebug, a pygmy slow loris. The team’s detection and successful treatment of Junebug’s gallstones could improve medical care for lorises living at zoos and conservation centers around the world. 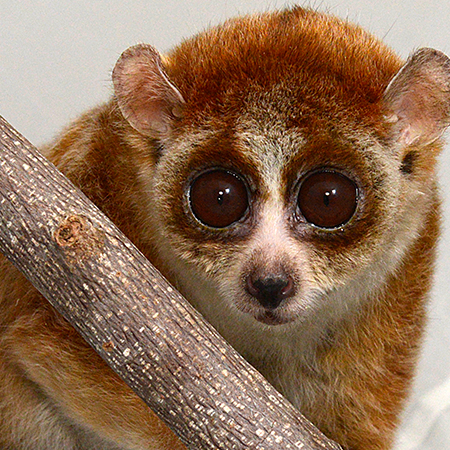 Junebug, who underwent gallbladder surgery in December. “This is a specialized and challenging surgery in dogs, let alone in a loris that weighs just over one pound,” says DLC veterinarian Laura Ellsaesser. Radiology and surgery specialists from Triangle Veterinary Referral Hospital donated their time to help save the loris.

It can take a village to save a loris.

In the case of Junebug, a 10-year-old pygmy slow loris diagnosed with rare cystine gallstones, the “village” included four veterinary specialists and their technicians from Triangle Veterinary Referral Hospital in Durham, NC in collaboration with Duke Lemur Center’s own four-person veterinary team. “Imagine six doctors collaborating to diagnose and treat an 18-ounce loris,” says Laura Ellsaesser, staff veterinarian at the Duke Lemur Center. “Having everyone involved was the key to having such a successful outcome.”

After their first rounds of diagnostic tests failed to detect what was ailing Junebug, Davison recalled a similar weight loss trend exhibited by Flea, a 19.8-year-old female pygmy slow loris euthanized after a rapid decline in weight and quality of life. As with Junebug, diagnostic tests had failed to shed light on the mysterious cause of Flea’s poor appetite, and she’d shown no improvement on antibiotics or fluids; but during her necropsy (the animal equivalent of an autopsy), the vet team had found three large stones in Flea’s gallbladder. Could gallstones be what plagued Junebug as well? 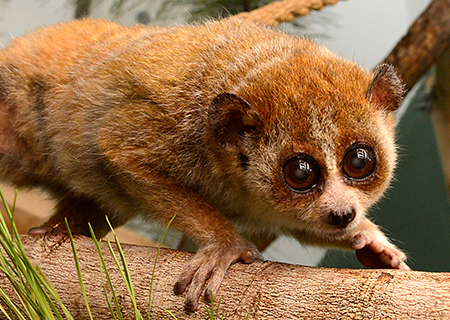 Intrigued, Schopler and Ellsaesser reached out to radiologist Lisa Woolman from the nearby Triangle Veterinary Referral Hospital. “To be a good lemur veterinarian one needs to be a generalist, a kind of jack-of-all-trades,” explains Schopler. “More and more in veterinary medicine, there are specialists who become experts on a narrow aspect of veterinary medicine. The veterinary care of lemurs is improved when we bring in those specialists on the more involved cases. After all, if there is someone who does a procedure routinely, even if not on a lemur, the outcome is likely better – especially if we can work together.”

Woolman, who conducts an average of 50 radiology procedures weekly on cats, dogs, and other small mammals, enthusiastically agreed to assist. On November 22nd, accompanied by TVRH cardiologist Jennifer Myers, Woolman drove to the Duke Lemur Center for a consultation. Her examination and abdominal ultrasound confirmed the DLC veterinarians’ hypothesis: Junebug had gallstones.

The loris was prescribed pain medications and vitamin supplements, tube fed, and given fluids to support her and stabilize her weight. Surgery was scheduled for the first week of December.

Whereas gallbladder surgery is relatively common in humans, it’s far rarer in animals. “This is a specialized and challenging surgery in dogs, let alone in a loris that weighs just over one pound,” says Ellsaesser. So Schopler and Ellsaesser called in the cavalry: Would the surgeon colleagues of Woolman and Myers at Triangle Veterinary Referral Hospital be willing to take on Junebug’s surgery?

The TVRH team again jumped at the opportunity to help Junebug. On December 4th, the loris’s surgery was performed by TVRH surgeons Marc Hirshenson and Cindy Eward. It proceeded beautifully: Junebug’s gallstones and gallbladder were removed, and within a few days she seemed much more comfortable and had begun eating on her own. By January 9th, she was once again waiting for her keeper at the front of her room for her morning diet, taking food readily, and scurrying to her food bowl.

The Lemur Center veterinary staff were in for a final surprise: Junebug’s stones, which had been sent to a lab, were deemed cystine stones – a very rare type of stone to find in the gallbladder. There is only one report of cystine gallstones being found in people and, prior to the discovery of Flea’s stones during her necropsy, there were no official reports of cystine gallstones in any animal species, with the exception of one report describing sick tree shrews.

“We’re writing a paper to share with other animal care professionals,” says Ellsaesser. “If other lorises begin exhibiting these symptoms with no other explanation, it’s advisable to look for gallstones.” The hope is that the DLC’s experiences with Flea and Junebug can be used to improve medical care for lorises living at zoos and conservation centers around the world.

“After that, the next step is to sort out what causes the stones to form,” she adds. “We’re trying to see if this is an issue we’re seeing in lorises more often, and if there is anything we can do to prevent these stones from forming, which is easier said than done when dealing with a rare species with so few in captivity.”

In the meantime, Junebug is thriving. “She’s returned to her usual outgoing self,” says Jodi Stirk, one of Junebug’s primary caretakers. “She’s even trained to walk onto a scale voluntarily so we can monitor her weight weekly post-surgery.”

As for Ellsaesser, she’s looking forward to working with Triangle Veterinary Referral Hospital on other complex cases. “It’s really a gift to have a specialty hospital just around the corner, with specialists who are willing to come to the Lemur Center to avoid the stress and risks of transporting the animals,” she says. “It was such a successful positive collaboration. It’s a nice relationship to have developed.” 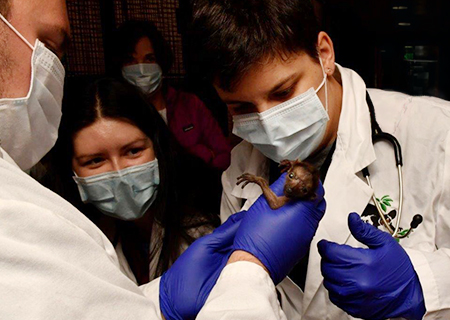 Caring for fragile and endangered animals is never easy. For lemurs, the challenge is compounded by the fact that there are no published books on lemur veterinary medicine. Pictured: DLC veterinarian Laura Ellsaesser examines an infant. 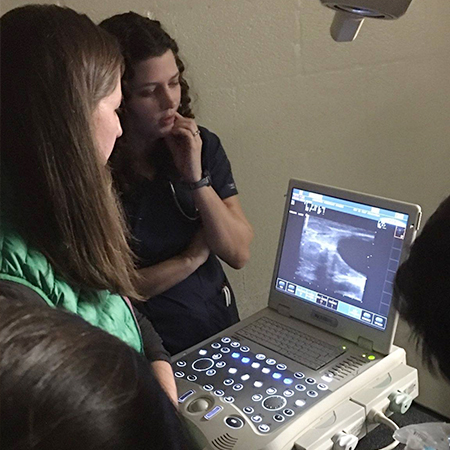 “It is fantastic to work in a university setting with so many experts close by,” says DLC veterinarian Bobby Schopler. “In the past, we’ve called on veterinary ophthalmologists, dentists, orthopedists, behaviorists, pathologists, internists, and more.” Pictured: Lisa Woolman from TVRH reviews Junebug’s ultrasound. Image courtesy of Triangle Veterinary Hospital. 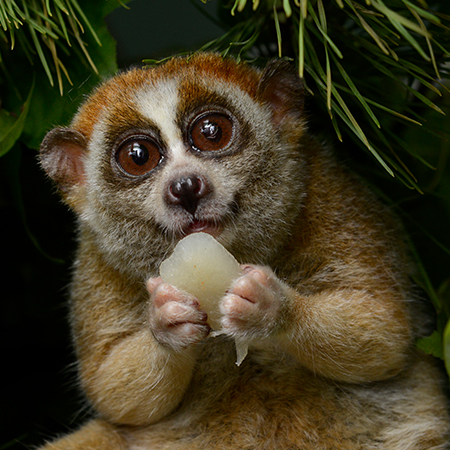 The surgical removal of the gallbladder is called cholecystectomy. Whereas gallbladder surgery is relatively common in humans, it’s far rarer in animals. 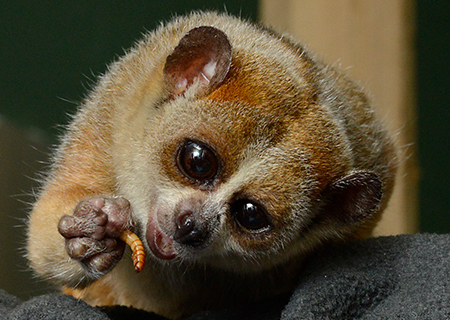 Cystine stones are composed primarily of cystine, a nonessential amino acid. Although sometimes found in the urinary system, they are extremely rare in the gallbladder. The reasons for cystine stones’ formation the gallbladder is not clear, and requires further research and exploration. (See Qiao et al, linked in article.) 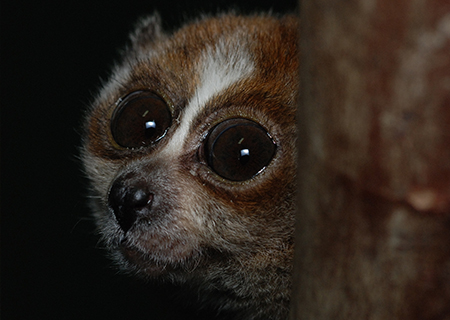 After Flea and Junebug’s stones were analyzed, DLC Data Manager Sarah Zehr combed through historic records and identified one other pygmy slow loris who incidentally had cystine stones at necropsy (she had been euthanized for an unrelated aggressive tumor). “We’re trying to see if this is an issue we’re seeing in lorises more often, and if there is anything we can do to prevent these stones from forming,” says Ellssaeser. 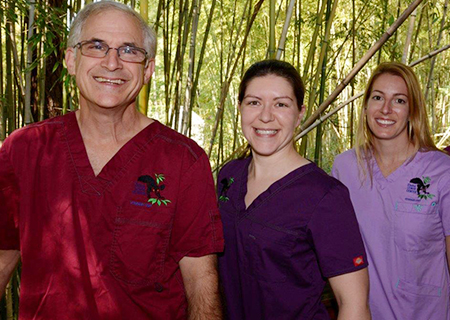