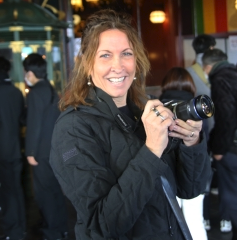 Two Duke professors have been awarded 2018 Guggenheim Fellowships to pursue studies in their fields.

Christopher Bail, Douglas and Ellen Lowey associate professor of sociology and public policy, and Anne Yoder, Braxton Craven professor of evolutionary anthropology, will receive six months of support from the John Simon Guggenheim Memorial Foundation. Bail and Yoder – alongside 173 other recipients – were chosen from a pool of nearly 3,000 applicants.

Bail will study a phenomenon known as the social media “echo chamber,” in which social media amplify or reinforce public opinions, and Yoder will research the family tree of mouse lemurs.

“It’s exceptionally satisfying to name 175 new Guggenheim Fellows. These artists and writers, scholars and scientists, represent the best of the best,” said Edward Hirsch, president of the foundation, in a press release. “It’s an honor to be able to support these individuals to do the work they were meant to do.”

With the Guggenheim Fellowship, Bail will study how nonprofits and other organizations influence public opinion on controversial social issues. His research will examine how these organizations utilize specific digital platforms to reach new and existing online audiences.

“There is mounting concern that social media sites contribute to political polarization by creating ‘echo chambers’ that insulate people from opposing views about current events,” wrote Bail on his website.

He also noted that this research will have important implications for the “interdisciplinary literature on political polarization” and the field of computational social science.

Yoder, who is the director of the Duke Lemur Center, will pursue a sabbatical project entitled “Building and Saving Trees in Madagascar.” She will study how mouse lemurs evolve into distinct species from a field laboratory in northwestern Madagascar.

“My work integrates field inventory activities with molecular phylogenetic techniques and geospatial analysis to investigate Madagascar, an area of the world that is biologically complex, poorly understood, and urgently threatened,” wrote Yoder on her faculty page.

Yoder also noted that studying animals in Madagascar will help scientists understand the evolutionary processes that shape the overall diversity of species on the island.