A few of the infants born at the DLC since the previous data release in 2014. Left to Right: Daubentonia madagascariensis 7279 Agatha, Eulemur flavifrons 7291 Gellar, Propithecus coquereli 7234 Hostilian, Eulemur coronatus 7247 Kek, Lemur catta 7240 Griselda, Varecia rubra 7298 Judith. A total of 130 animals have been added to the data.

A 53-year archive of life history data for the world’s largest and most diverse population of endangered primates is now available for free download online. Fully updated in February 2019, the Duke Lemur Center database allows visitors to view and download data for more than 3,700 animals representing 27 species of lemurs, lorises, and galagos.

Since the DLC’s first data release in 2014, data has been downloaded by students, scientists, veterinarians, zoo professionals, and educators from 25 countries around the world. The 2019 update contains the same file types released with the original manuscript in 2014 and includes additional data collected over the intervening years. A total of 130 animals have been added to the database.

According to registry information collected via the Duke Lemur Center website, the majority of downloads have been by undergraduate students (26%) and graduate students (25%). 12% of downloads were by veterinarians and zoo professionals, and 7% were by high school students and educators. 62% of registrants used the data for research projects.

A “treasure trove” of data and its uses

The DLC’s treasure trove of data, which contains information about the lives, health, and habits of thousands of animals, dates from the center’s beginnings in 1966. The large sample sizes, exact dates of events, and longitudinal data that in many cases span an animal’s entire life make these data sets unique, particularly within the primate literature.

Because lemurs hang near the edge of extinction, it’s extremely unlikely that a collection of similar size will ever be recreated, says Sarah Zehr, a research scientist and Data Manager at the DLC. “Many of these species are critically endangered in the wild, so they’re unlikely to be held in captivity again. This means that the data are irreproducible.”

By making its data available to the world, the DLC hopes that the information will (a) help institutions better care for lemurs in captivity, and (b) help researchers and conservationists understand these animals in order to better protect them in the wild. Lemurs are the most endangered mammals on Earth, and by studying the variables that most affect their health, reproduction, and social dynamics, we learn how to most effectively focus our conservation efforts in Madagascar.

The project was supported by the Institute of Museum and Library Services (MA-30-16-0191-16), National Evolutionary Synthesis Center, and the National Science Foundation (DBI 1258440). Additional support was provided by the Duke Lemur Center and Duke’s Natural Sciences Division. 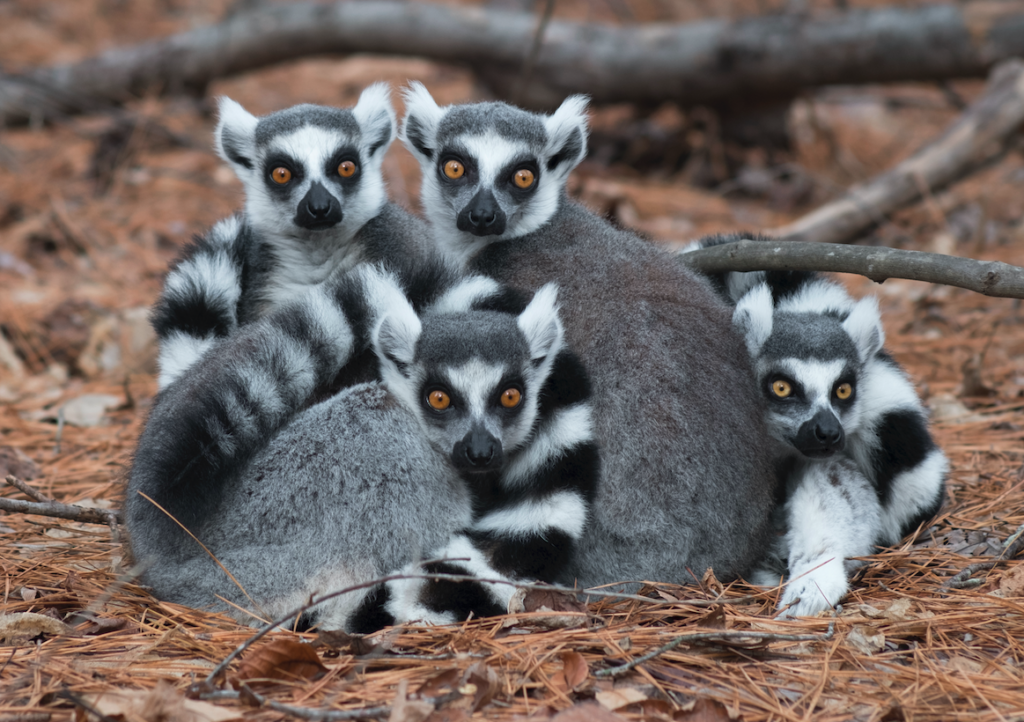 Staff at the Duke Lemur Center observe and record virtually every aspect of an animal’s life from cradle to grave. They know when each animal was born, who its parents were, how fast it grew, what it ate, which animals it mated with, how many offspring it had, and when and why it died. 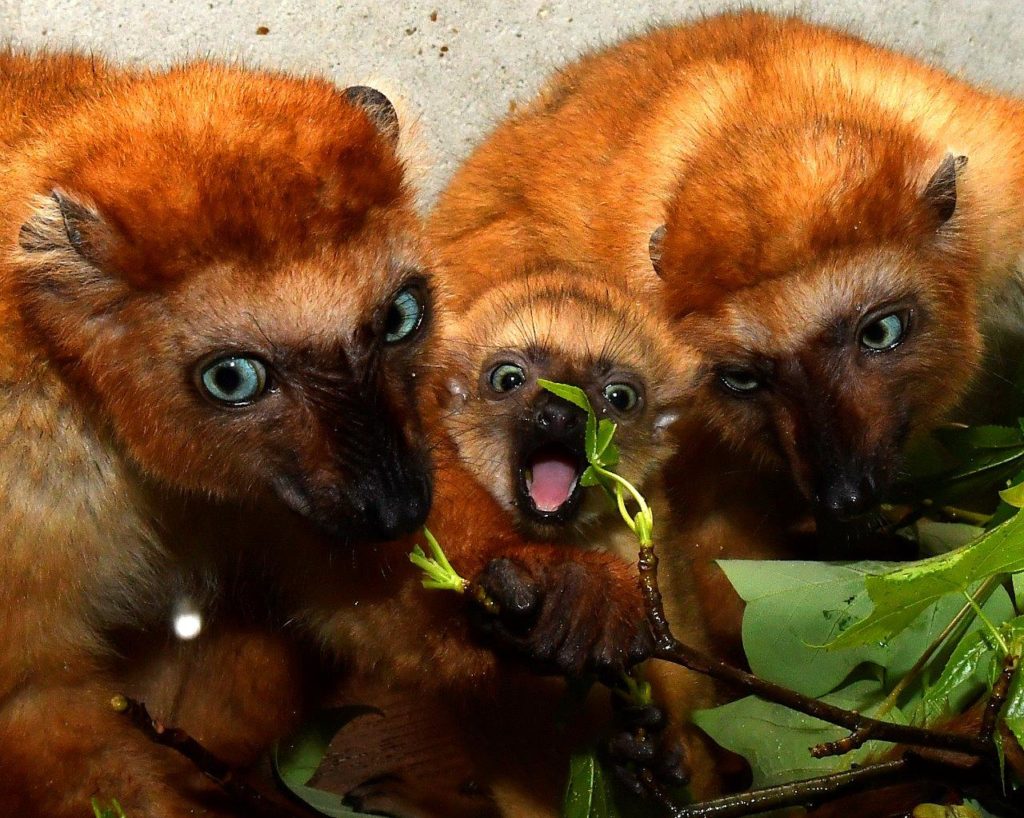 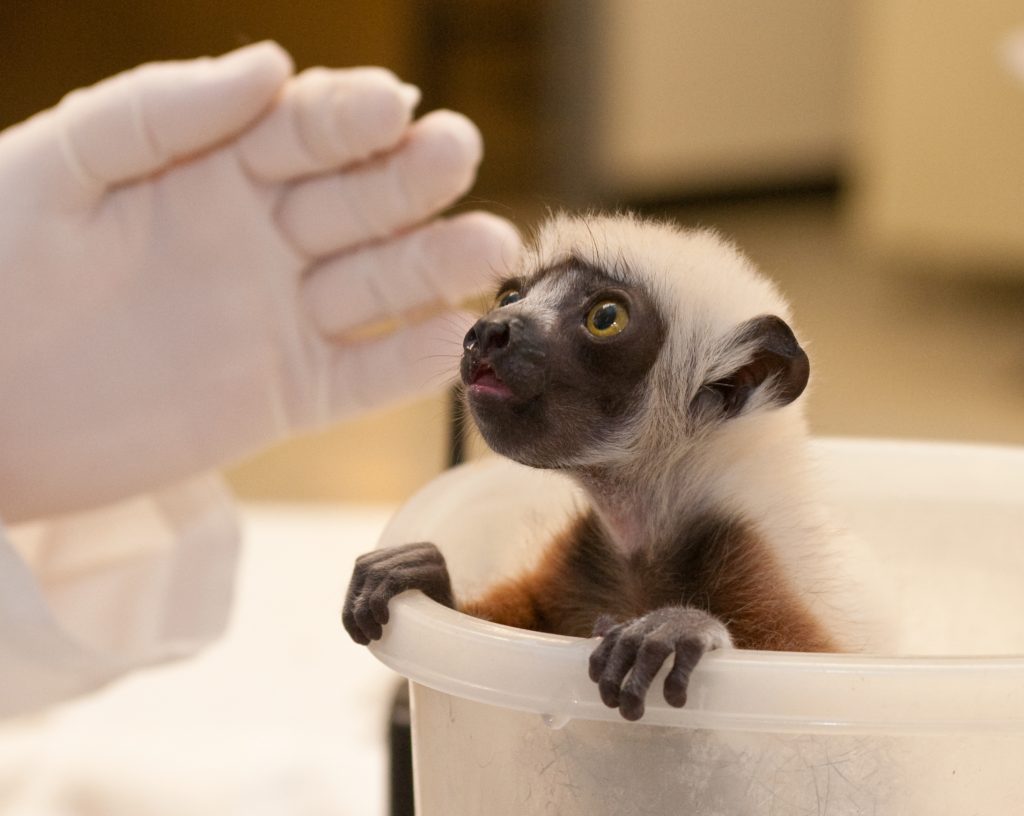 Rupert, and infant Coquerel’s sifaka, gets weighed at the Duke Lemur Center. The center’s database contains 82,609 weight measurements for more than 2,200 animals, taken over each animal’s lifespan.