July 24, 2014 — A 48-year archive of life history data for the world’s largest and most diverse collection of endangered primates is now digital and available online.The Duke Lemur Center database allows visitors to view and download data for more than 3600 animals representing 27 species of lemurs, lorises and galagos — distant primate cousins who predate monkeys and apes — with more data to be uploaded in the future. 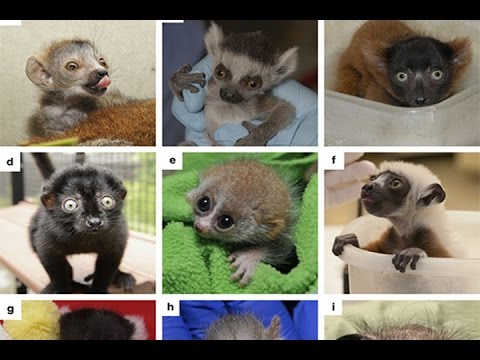 Staff at the center observe and record virtually every aspect of an animal’s life from cradle to grave. For each animal they know when it was born, who its parents were, how fast it grew, what it ate, which animals it mated with, how many offspring it had, and when and why it died. 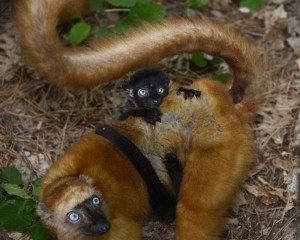 Blue-eyed black lemurs represent one of the 25 most endangered primates in the world. This infant and his mom are among 27 species of endangered primates at the Duke Lemur Center whose lifelong records are now digitized and available online. Researchers hope the data will help the last blue-eyed black lemurs left in the wild — now fewer than 7000 — hold on. Photo by David Haring.

Hiddleston is one of them. Hiddleston is a blue-eyed black lemur, which makes him one of the 25 most endangered primates in the world. Since he was born in March 2013, staff at the Duke Lemur Center have catalogued minute details of his life in their daily logbooks. They know how big he was at birth and when he tried his first solid foods. They monitor his weight and note how he interacts. They even tracked his first attempts to climb a tree.

Hiddleston isn’t alone. When primatologist Sarah Zehr first arrived at the Duke Lemur Center in 2007, she found a treasure trove of data about the lives, health and habits and of more than 4000 animals, dating from the center’s beginnings in 1966. 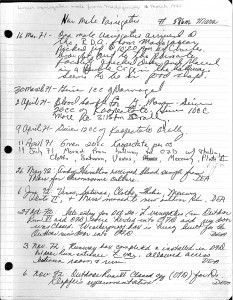 Many of the Duke Lemur Center’s animal records were locked up in handwritten notebooks and typed paper records until now.

The fact that lemurs are at risk of dying out makes it unlikely that a collection of similar size will ever be recreated, Zehr said. “Many of these species are critically endangered in the wild, so they’re unlikely to be held in captivity again. This means that the data are irreproducible.”

Getting at this one-of-a-kind data, however, was a difficult task. Much of the data were locked up in handwritten notebooks or typed paper records. “The downside of the paper records is they’re vulnerable, they’re not digitized, and we only have a single copy — so they’re impossible to analyze,” Zehr said.

The center migrated to electronic records in the 1990s, but that still left much of the data buried in odd computer files or hard-to-use databases.

That began to change in 2012, when Zehr and software developers Freda Cameron and the late Richard Roach, formerly of SAS, started working on a project to assemble the information from the various source files and convert it into a single, easily searchable format. 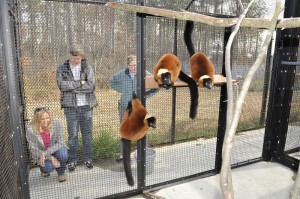 It took them three years to compile and digitize the data and put it online. Visitors to the new database will find birth and death dates for each animal, IDs and ages for its parents, any litter mates or siblings, lifelong weight records, breeding season, gestation length and number of offspring — much of which would be difficult if not impossible to collect at a similar level of detail for lemurs living in the wild.

Users can also find out whether any biological samples are available for an animal. The bank of biological samples at the Duke Lemur Center contains nearly 10,000 samples for more than 1000 individuals. It’s a modern ark of things like blood, serum, DNA, urine, and small pieces of skin, organs and other tissues — many taken during routine veterinary procedures for diagnostic tests or when an animal dies of natural causes — all preserved in freezers for the future.

A baby aye-aye gets weighed at the Duke Lemur Center. The center’s new database contains over 65,000 weight measurements for more than 2100 animals (27 species), taken over each animal’s lifespan.

Thanks to the center’s captive breeding program the data continue to come in. In the next year they plan to add additional records, such as health and reproductive status, causes of death, behavior, and group size and composition for each animal over time.

The hope is that the data will help institutions better care for lemurs in captivity, and help scientists understand these animals in order to better protect them in the wild.

The database will also allow generations of future researchers to tackle a wide range of questions. Researchers studying aging and longevity, for example, will be able to compare maximum lifespans in captivity for different primate species, and pinpoint cellular and molecular traits that distinguish long-lived primates from short-lived ones. 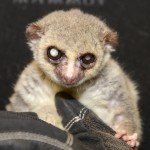 The database includes records for lemurs like Jonas, who at the age of 29 is the longest-lived captive dwarf lemur in history.

The project was supported by the National Evolutionary Synthesis Center and the National Science Foundation (DBI 1258440). Additional support was provided by the Duke Lemur Center and Duke’s Natural Sciences Division.

The data is available online via the Duke Lemur Center website at https://lemur.duke.edu/duke-lemur-center-database/.