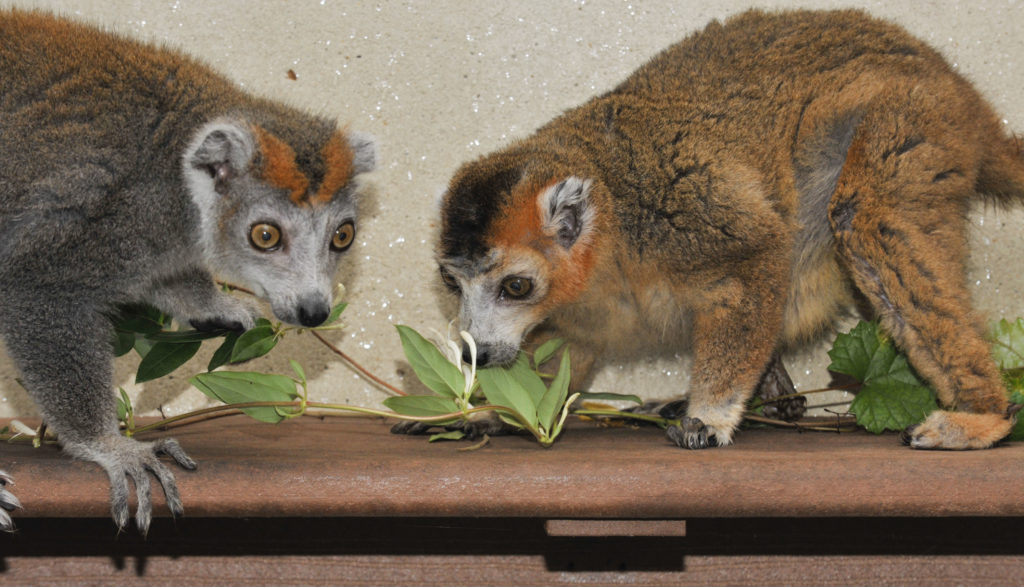 29-year-old crowned lemur Ike (right) with 24-year-old Set, photographed in September 2019. Female crowned lemurs are predominantly gray with an orange “crown”on their foreheads, whereas males are a much darker reddish brown with a black and orange crown. Photo by David Haring.

The Duke Lemur Center is mourning the death of 29-year-old Ikenaten — a lifelong resident of the DLC, cherished “feisty old man,” and the oldest crowned lemur (Eulemur coronatus) ever on record. Born to parents Bastet and Zoser at the Lemur Center on April 18, 1990, Ike far surpassed his species’ median life expectancy of 18.6 years.

His personality was as large as his life was long. “He was super feisty,” says Brittany Canfield, one of his former caretakers.

Like many of the DLC’s lemurs, Ike was trained to voluntarily walk onto a scale for routine weight checks. “He was very good at getting onto the scale but not good at getting off,” laughs Assistant Curator Britt Keith. “He loved to scent mark the scale and once he started, he refused to leave it. I’d wait, then finally give up and call for back-up; and as soon as Ike heard me make that radio call, he’d get right off!”

Although otherwise gentle, “Ike was very protective of every female he ever lived with,” says Britt. His longtime companion, a 24-year-old female crowned lemur named Set, developed cancer and was humanely euthanized on December 12.

“They were a perfect pair,” says Brittany. “When Set wasn’t feeling well, Ike would perch over her in her basket and bark at us to stay away.”

“He would always get between you and her,” says Britt. “No matter how old he was, or how arthritic his joints were, he was very protective of Set.”

As Ike and Set aged, Duke engineering students created an adjustable ramp to help the elderly pair continue to safely access their enclosure’s outdoor “patio,” despite their decreased mobility. “That ramp was their favorite piece of furniture,” says Brittany. “He and Set loved to spend time outside sunning together – so much so that it was tough to coax them back inside at the end of the day.”

A notoriously picky eater, Ike had difficulty maintaining weight as he grew older; and in April, yogurt, chunks of banana, apple sauce, and other healthy treats were added to his diet. Ike appeared to enjoy these throughly. His weight increased, and in spite of being carefully monitored for chronic kidney disease and arthritis, as the weather warmed he was often seen racing around his enclosure with the “zoomies.”

“He was zooming around like a crazy young thing,” says Brittany.

Yet after Set’s death on December 12, Ike’s quality of life quickly declined. Diagnostic tests and a consultation with a local oncologist indicated cancer, most likely chronic lymphocytic leukemia; and given the poor prognosis, the Lemur Center’s veterinary and animal care staff made the decision to humanely euthanize Ike on December 20. He was a feisty old man, much loved, and very much missed.

Ike lived his entire life at the Duke Lemur Center, where he sired one daughter, Seshat. Seshat has given birth to six offspring, including Anhotep, a favorite resident of the DLC’s summer tour path.

Crowned lemurs are classified as endangered in Madagascar and have a very limited range in the northern tip of the island. Their habitat continues to shrink rapidly due to the encroachment of slash and burn agriculture, and total population estimates range from 1,000 to 10,000 animals. The Duke Lemur Center actively works in Madagascar, teaching more sustainable farming methods that reduce the need for annual burning of the forest and partnering with the Government of Madagascar’s Wildlife Department to improve lemur care and conservation breeding within Madagascar’s zoos. (Learn more about how we’re helping in Madagascar.) Here in Durham, our conservation breeding program — of which Ike, his daughter Seshat, and Seshat’s offspring are a vital part — helps  create a “genetic safety net” for these rare and endangered animals. 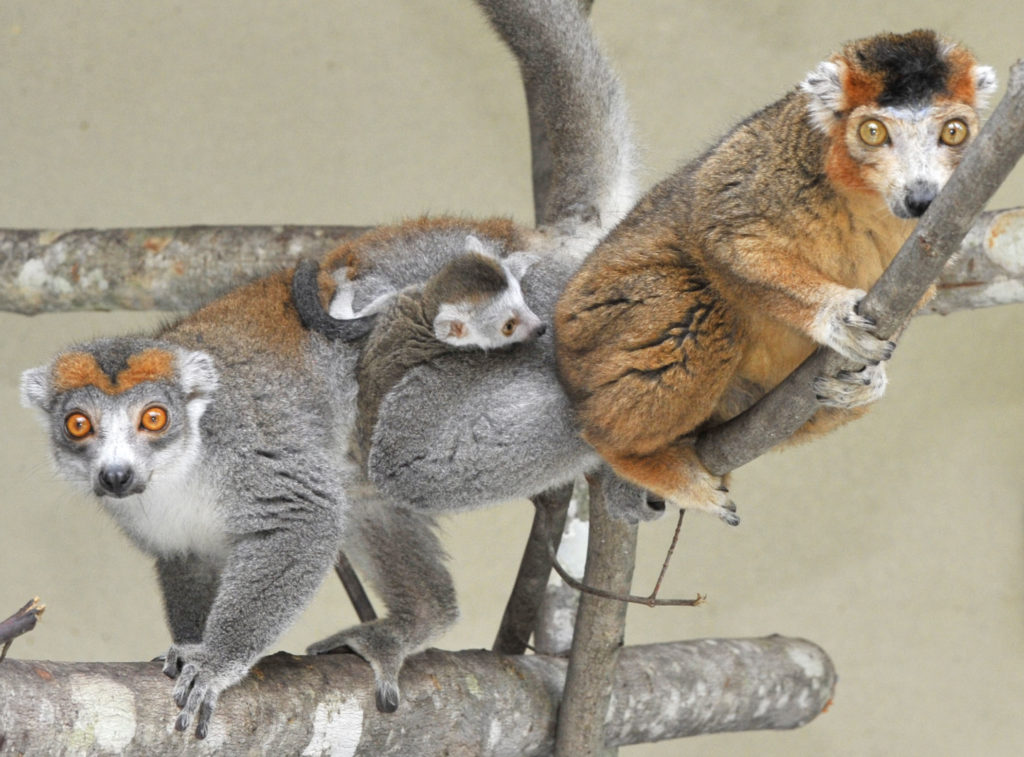 Ike with mate Tasherit and their daughter, Seshat, in 2010. 29 crowned lemurs live in the United States, of which 11 reside at the Duke Lemur Center. Photo by David Haring. 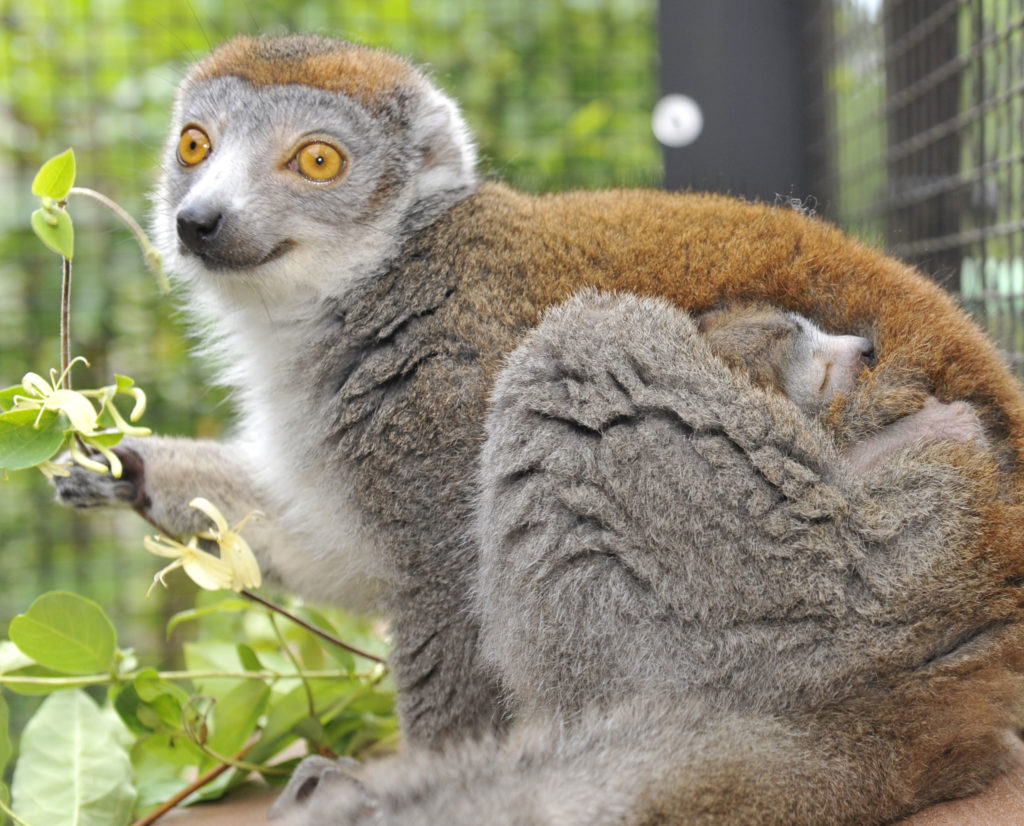 Ike’s daughter Seshat with his grandson Anhotep in 2014. Now grown, Anhotep and his mate Aria are favorite residents of the DLC’s summer tour path. Photo by David Haring. 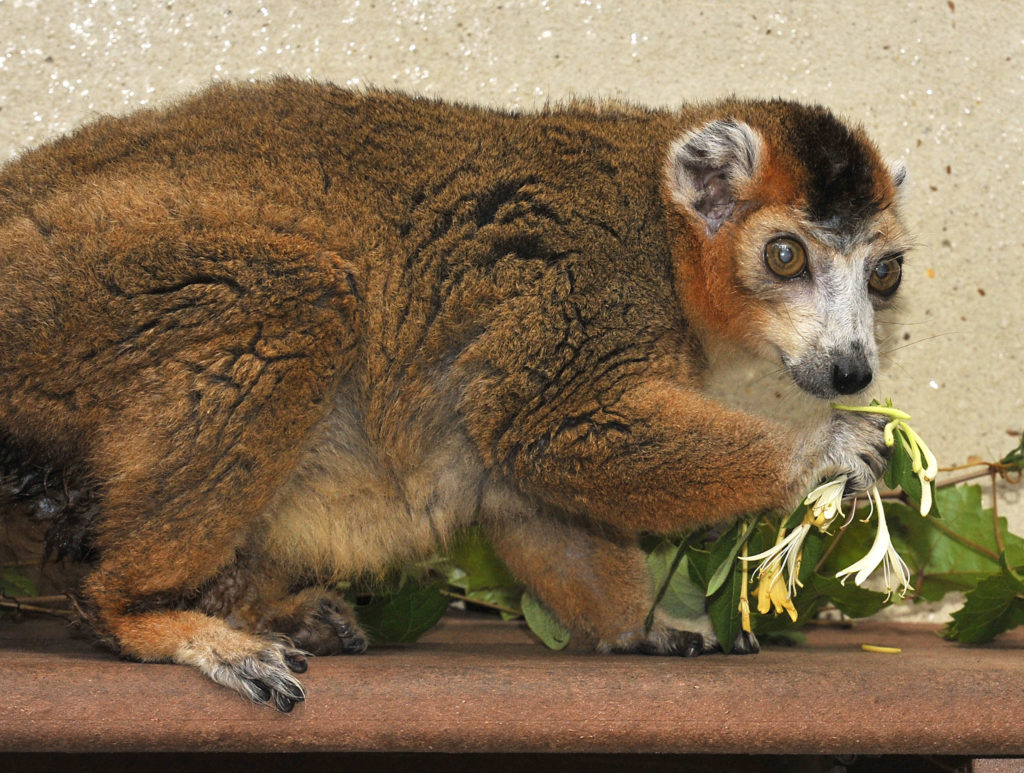 Ike, photographed in September 2019 at 29.4 years of age. Photo by David Haring.