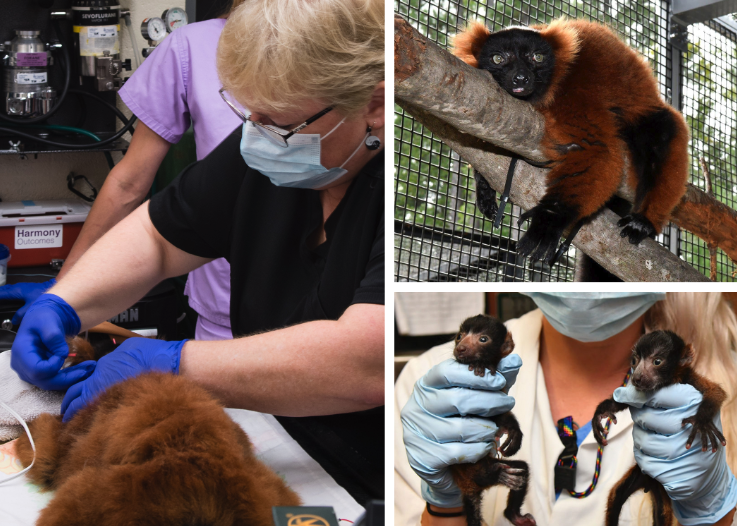 From left: Dr. Camille Sherrod performs acupuncture on Comet at the Duke Lemur Center; 34-year-old Comet lounges in the sunshine (and sticks his tongue out at photographer David Haring!) in September 2019; twins Judith and Mae, sired by Comet in 2018. Photos by David Haring and Sara Clark.

When 34-year-old Comet, a critically endangered red ruffed lemur, was treated for an injury but plateaued before making a full recovery, Duke Lemur Center veterinarians turned to local acupuncturist Camille Sherrod, D.V.M., of Retrieving Balance Mobile Vet. The result? Acupuncture therapy for the aging lemur — a first in lemur care.

Sara: At 34 years old, Comet is quite an elderly lemur; but prior to July 27 he’d seemed healthy for his age. What was the first sign that something was wrong?

Dr. Ellsaesser: He initially presented cold, stiff, and not very responsive. He had seizures about three years ago that he’d recovered from and didn’t require ongoing medications. Given that history, we were concerned this may be the case again and that we’d found him during the post-ictal period [the time shortly after having a seizure].

Sara: How did you treat him initially?

Dr. Ellsaesser: We warmed him up, supported him with fluids, and monitored him for further seizure activity.  As he responded to fluids and heat support he was alert with no seizures witnessed, but he remained stiff and unable to move. When we re-evaluated his neurologic status he was weak in all limbs with little to no reflexes but his cranial nerve reflexes [how we check the brain] were all normal, so all signs pointed to a problem with his neck, not seizures; but no obvious fractures or dislocations were visible on the radiographs. We began supporting him with aggressive pain management and steroids for inflammation, and he improved dramatically over the course of the week. He regained the ability to sit up on his own. Just two days after starting his medications, he could stand and take a few steps on his own.

We prescribed the lemur equivalent of ‘bed rest’ – living in a smaller enclosure for about three weeks, ensuring that he wouldn’t try to do too much too soon and hurt himself further. He continued to make steady improvement over time, gaining more mobility and steadiness in his movements. After 2 weeks we gave him a slightly larger but still smaller than normal enclosure to give him a chance to slowly increase his activity.  After three weeks he continued to do well so we expanded his housing further: we opened up a single enclosure of his usual housing area, heavily branched so he could move around easily. From there, we expanded his housing even further. He was moving better and after a while began choosing to make jumps again.

Eventually, though, he reached a plateau. He’d improved back to the point that he was very functional, but it seemed like there was still some ground to be gained as far as getting him back to where he was before the injury occurred. Although he was moving well, he still had a stiff, hunched posture that suggested neck pain and he remained slightly weaker on his left side.

Sara: How did you and Dr. Schopler reach the decision to try acupuncture?

Dr. Ellsaesser: Timing is everything! Around the time Comet began to plateau, I was struggling to help my own cat, Sokatra, who was suffering from arthritis and back pain. There aren’t any good long-term pain management options for cats, and Sokatra wasn’t a candidate even for short-term traditional therapies because of her other medical conditions. It was worth exploring non-traditional options. Sokatra also hated being taken into a clinic – it’s stressful for a cat, after all – so I reached out to Dr. Sherrod, who provides in-home acupuncture services for pets. Sokatra responded incredibly well. After just a couple of sessions, she was less stiff and hunched; and I realized this was a treatment that could be beneficial to Comet as well.

Sara: Is it common for therapies that work for cats also to work for lemurs?

Dr. Ellsaesser: As with much of what we do, no one’s ever done it before. There are no published books on lemur veterinary medicine. How we treat lemurs is extrapolated from what we know about all of the other species, dogs, cats, horses, etc. From our perspective, we’d tried traditional pain management, and we’d gotten so far with that; but Comet had reached a plateau where traditional pain management wasn’t enough.

Dr. Sherrod: We’ve discovered that acupuncture helps to modulate pain in a way that pharmaceuticals just can’t do. With the drugs that are currently available, we can only modify pain signaling and inflammation in certain ways. Acupuncture offers additional possibilities. We can stimulate the flow of the body’s energy such that it doesn’t stagnate in places of pain.

Dr. Ellsaesser: We were thrilled that Camille was willing to come out and try it. One challenge we face in trying specialized novel therapies in lemurs is finding a veterinarian willing to say, ‘I do this in cats and dogs. Sure, I’d be willing to try it on a lemur!’ Camille said, based on the images, that a ruffed lemur’s anatomy appears relatively cat-like. It seemed like something that would translate well.

Dr. Sherrod: Comet’s body was surprisingly similar to a cat’s. The limbs, of course, were very different.

Dr. Ellsaesser: Everything in veterinary acupuncture is trying to apply what we know in people. The points, the diagramming, the energy lines are described in people; and those have been taken and applied to horses, cats, and dogs.

Sara: And now lemurs! Camille, is Comet the only lemur you’ve treated?

Dr. Sherrod: My one and only lemur! It’s been the highlight of my career in some ways: The opportunity to translate this kind of medicine from a species I’m accustomed to working with, to help one I’ve never laid my hands on before. It’s incredible, seeing the level of healing that acupuncture can provide without medicines and without any side effects.

Sara: How is Comet doing now?

Dr. Ellsaesser: He’s close to the level that he was before the injury. Danielle and Brittany [Comet’s primary caretakers] have reported that he is pretty close, if not fully, back to what he was. Just a few weeks after his initial acupuncture session, he is still ever so subtly weaker on his left side, but he’s very close to being equal.

Dr. Sherrod: We’re planning between two and five more sessions, depending on how he does.

Dr. Sherrod: [Laughs] That’s right. If he’s on to breeding season and doesn’t look back, our work is done!