Slowly and deliberately, a large creature moves through the tree tops. Its large hands and feet securely grasp the branches as it reaches for a tasty branch of leaves. This is Megaladapis. Also known as the “koala lemur,” Megaladapis is an extinct subfossil lemur from Madagascar. At least seventeen species of lemur have gone extinct on Madagascar within the last 2,000 years. So recently in fact, that their remains are not old enough to be considered fossils! Instead, any remains younger than 10,000 years old are called subfossils – meaning not all of the bone has been replaced with minerals or other rock materials yet. 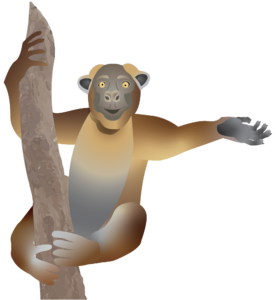 Despite its nickname of “koala lemur,” Megaladapis has no direct relationship to koalas. Instead, scientists used the koala as a model of how Megaladapis would have moved through the trees and what Megaladipis would have eaten.

Similar to koalas, Megaladapis had long arms for pulling branches of leaves closer with short legs and large feet to provide stable support when clinging to a tree looking for the tastiest leaves. Additionally, they both had short tails and could move across the ground, but preferred to move between tree branches. Just like koalas, Megaladipis’ shorter back legs would have made walking on the ground on all fours quite awkward. 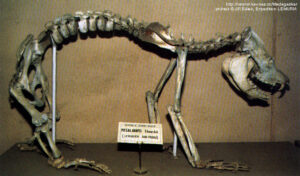 Giants of All Shapes and Sizes 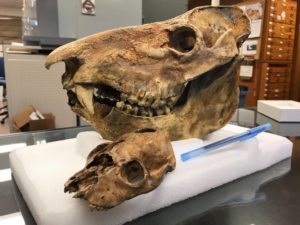 Megaladapis skulls from the collection of the DLC Museum of Natural History.

Megaladapis ranged all over Madagascar with a high preference for wooded habitats. M.p. edwardsi was found only in the south and southwest, M.m. grandidier ranged from north to south, spending most of its time in the central highlands, and M.m.magascariensis ranging north to south as well and overlapped with M.p. edwardsi in the south and southwest.

The largest of the three species, M.p. edwardsi was approximately 85kg (187 lbs) and was roughly the size of a male orangutan. The smallest species was M.m. madagascariensis, weighing in at approximately 45kg (99 lbs). 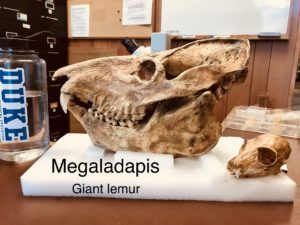 Megaladapis skull (left) from the collection of the DLC Museum of Natural History.

Fossils can be a complicated puzzle to be put together, and Megaladipis were initially, and falsely, described as aquatic creatures, similar to rays or crocodiles. Their faces are elongated with eyes on the sides of their heads, rather than on the front like all other primates. These unique facial features, in addition to mislabeled and misclassified crocodile bones, caused an early researcher to describe Megaladapis as an aquatic creature that used its legs as a crocodile uses its tail to maneuver through the water.

Megaladapis was quickly reclassified as an arboreal primate with a long face that was used as an extension of its neck to reach the best leaves to munch on. Unlike other primates, Megaladapis did not have upper incisors; instead they had a tough pad on the roof of their mouths to form a hard surface against which their bottom teeth could efficiently crop leaves off of branches. Additionally, researches believe that Megaladipis most likely had prehensile lips, similar to a giraffe, to pull difficult-to-reach leaves closer to their mouths. 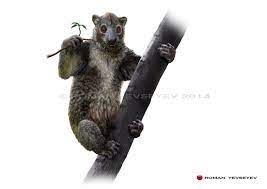 Reconstruction of how Megaladapis may have looked.

Megaladapis most likely lived in small groups, since their limited food resources (leaves) would have encouraged the formation of smaller groups to reduce competition and allow them to manage their energetic needs. Scientists have concluded that Megaladapis was diurnal, spending their days awake and foraging for food and spending their nights sleeping.

But, how can scientists determine the activity patterns of long-extinct animals? There are actually a number of ways that scientists can determine activity pattern from fossils (or subfossils in the case of Megaladapis). The easiest way is to look at the dimension of the eye sockets in the skulls and compare them with the eye sockets of similar living creatures. In the case of Megaladapis, the measurements of their eye sockets are often compared to those of gorillas, who are diurnal. 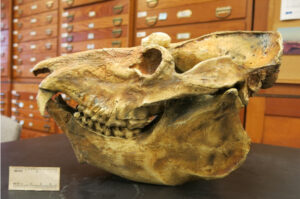 The subfossil remains of young Megaladapis individuals can tell us how often they reproduced and how quickly they lost their baby teeth (replacing them with their permanent “adult” teeth). While an adult would have been the size of an orangutan, young individuals were closer to the size of a Coquerel’s sifaka, weighing about eight pounds and standing only two feet tall.

There remains a great deal to learn about Megaladapis and its fellow subfossil lemurs. The fossil record on Madagascar is limited, but scientists are still curious to learn all they can about how these creatures interacted with their environment, as well as the effect their extinction had on their environment and the other lemur species in Madagascar. Maybe one of you could be the next to discover new information about the amazing giant lemurs of Madagascar’s history!