Deforestation, especially clearing forest for agriculture, is one of the biggest causes of biodiversity loss in the world. In Madagascar, as in many tropical low-income countries, subsistence farmers that live on the forest frontier often use a system of shifting agriculture that involves slashing (clear-cutting) vegetation, burning the dried slash, and then farming the land, usually for rice or maize. After a growing season, the land loses its fertility and is often used to grow bananas or cassava. The land is then left fallow for several years for the vegetation to regenerate, before another round of slash-and-burn. When population densities are low, fertile lands are abundant, and fallow periods are long (10-20 years), this system can be sustainable. However, in Madagascar and many other countries, the population density has grown and the amount of fertile arable land has decreased, making fallow periods of 2-3 years more common. This is not enough time for the soil to regenerate, and the farmers face decreasing yields and food insecurity. They must often turn to clearing forests for new farm land. 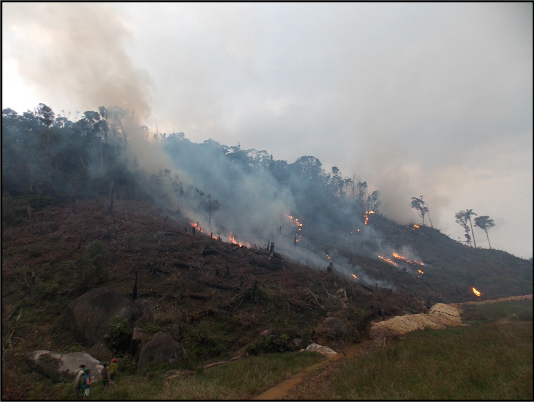 Above: Slash-and-burn agriculture is a common system in the tropics, and may have been sustainable in the past. Current levels, however, may not be sustainable for future generations, and the rapid loss of forest is threatening endemic biodiversity. Photo credit: Lydia Tongasoa.

Alternatives to shifting agriculture include permanent techniques, such as agroforestry. Agroforestry involves planting trees throughout the agricultural landscape, and can have different purposes. Trees can be grown as windbreaks, to protect watersheds, and prevent erosion. Trees can also be the main crop, including such valuable trees as coffee, cloves, and cacao (from which chocolate is produced). These cash crop trees often grow better in light shade, and are planted in mixed species forests that can promote both agricultural production and biodiversity.

In the Andapa district of northeast Madagascar, DLC-SAVA Conservation has been supporting an agroforestry training program for three years. This program focuses on a primary school in the remote countryside. The local parent teacher association has established a cooperative to create and tend a tree nursery, planting seedlings in a designated school plantation, as well as sharing the seedlings they produce among the members to plant in their agricultural fields. Thus far, over 400 seedlings have been produced and shared with members, including valuable cash crop trees mixed with native forest trees. 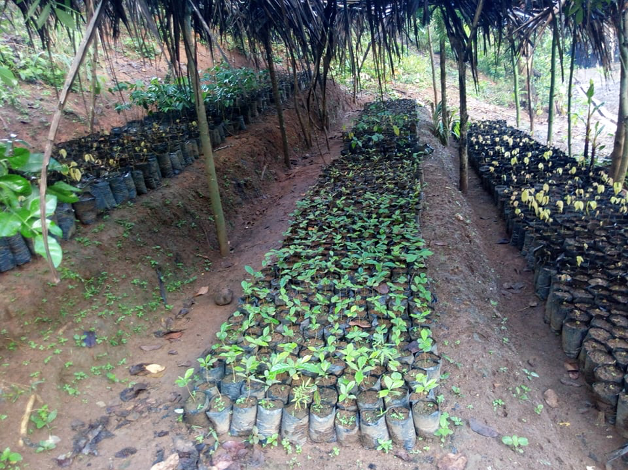 Above: The tree nursery at the Belaoka school has produced over 2,000 seedlings this year, with coffee in the middle foreground, cloves in the middle background, cacao to the right, and forest trees to the left. Photo credit: Thorien Rabemanantsoa.

This June, 2020,we co-hosted an agroforestry training workshop for the PTA. We collaborated with the university in SAVA region, CURSA, and two agricultural business owners who run farming associations called Vola Maitso (Green Money) and Mamboly Vola (To Grow Money). The CURSA Director, Dr. Christophe Manjaribe, earned his PhD doing research on the ecological restoration of degraded agricultural landscapes in southeast Madagascar. He applies his training and knowledge to teach students and farmers about the value of trees on the landscape, and the proper construction, care, and production of tree nurseries. Michel Besinoa from Vola Maitso is a cash crop farmer with one of the largest plantations of cacao, coffee, and cloves in the SAVA region. He has decades of experience as well as formal training in agroforestry. Thorien Rabemanantsoa of Mamboly Vola has a degree in agriculture, with a specialty in vanilla agroforestry, as well as poultry husbandry, and is a consultant for DLC-SAVA to evaluate our agricultural and forestry projects. Lanto Andrianandrasana, the DLC-SAVA Project Coordinator, has been coordinating the DLC projects in Madagascar since 2011, and participates in numerous reforestation and agricultural development projects. Lanto organized the training, bringing together leaders from all over SAVA region to unite in the Belaoka school nursery and teach the PTA critical skills in agroforestry.

Above: Participants outside the Belaoka school. Participants all wore masks provided by DLC, and hand-washing stations as well as hand sanitizer were available and strongly encouraged. Posters about COVID-19 were distributed to raise awareness about the virus, although thus far the SAVA region has been lucky with no known cases. Photo credit: Thorien Rabemanantsoa.

The two-day event involved approximately 20 PTA members and three students from the university. The first day began with lectures in the classroom. Workshop leaders gave PowerPoint presentations on the values of trees for farming, as well as step-by-step instructions on creating a nursery, germinating seeds of different trees, and how to prepare the land and plant the trees. Agroforestry is a science and an art, with academics testing the efficacy of different methods, and practitioners honing their skills through years of their own experimentation. It was inspiring to see Malagasy professionals from different backgrounds converge to strengthen the capacity of rural communities to create productive agroforestry plantations.

Above: The first day focused on theory and practice in agroforestry, with PowerPoint presentations and drawing schematics on seedling spacing, planting, and more. Photo credit: Thorien Rabemanantsoa.

The second day included hands-on demonstrations. Participants prepared the plantation behind the school by clearing weeds, preparing compost and mulch, and measuring out the proper distance between seedlings. The participants planted 33 cacao seedlings in the school plantation, and all participants will share the ~ 400 seedlings produced in the nursery that are ready for planting. We keep records of the seedling distribution and conduct annual evaluations and consultations to monitor the project. We are also expanding the nursery and stocking the PTA with more seeds and pots, with a goal of growing 10,000 seedlings by next year.

Above: The second day consisted of hands-on demonstration and planting seedlings in the school plantation. Michel explained how to identify strong seedlings ready for planting (left). Dr. Manjaribe is never afraid of getting his hands dirty as he demonstrated preparing the site with his machete (middle). All participants, including Project Coordinator Lanto Andrianandrasana, helped dig holes and prepare the plantation for new seedlings (right). Photo credit: Thorien Rabemanantsoa.

This project was made possible by the generous donations and grants of our DLC-SAVA Conservation supporters. Stocking and maintaining this tree nursery is a big job, and expensive to start. The long-term goal is that the trees will produce marketable crops, and the nursery will become self-sustaining. The fruition of this vision is at least 5 years down the road, though, and further support will be needed to continue training farmers, producing seedlings, and raising awareness on the importance of trees on the landscape. The PTA is dedicated to this goal, and the training program created renewed energy and momentum, reinforcing the partnership between local actors and the DLC in Madagascar.