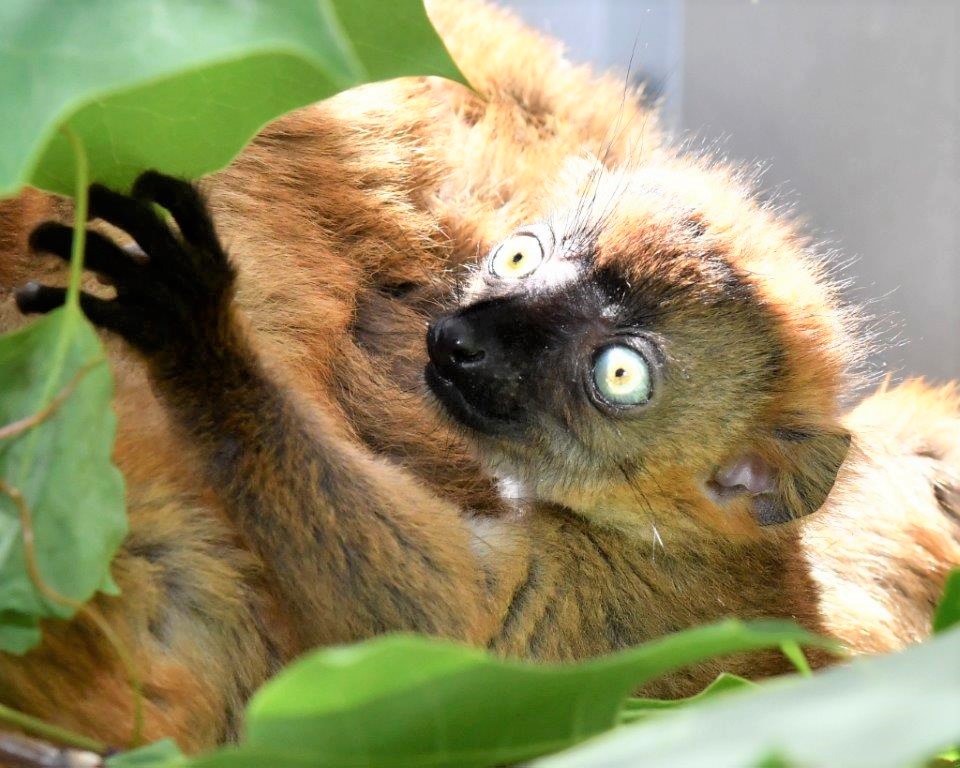 Malala, whose name means “beloved” in Malagasy, was delivered via caesarean section on April 1, 2021. She is the second offspring of Velona and Mangamaso, the first lemurs imported from Madagascar to the U.S. in 24 years. Photo by David Haring.

For the third day of Baby Week 2021, we are thrilled to announce the birth of Malala, a critically endangered blue-eyed black lemur (Eulemur flavifrons)!

With fewer than 40 in human care in North America, every blue-eyed black lemur infant born is cause for celebration—but Malala’s birth has an extra level of excitement. As the second offspring of the only pair of lemurs to be imported from Madagascar to the U.S. in 24 years, she joins her older sister Ranomasina as one of the most genetically important lemurs at the DLC. Like the rest of her family, Malala’s name is Malagasy, the language of Madagascar, and means “beloved.” 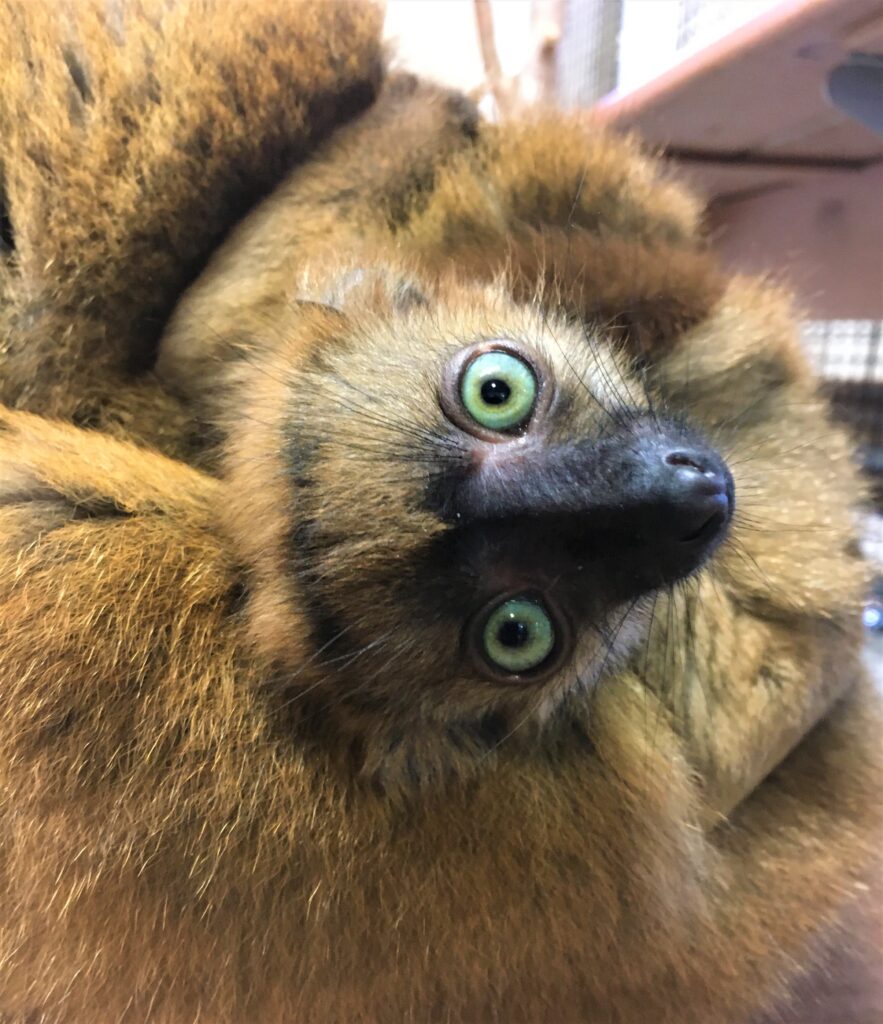 Blue-eyed black lemurs are the only species of lemur with blue eyes. All individuals of this species have blue eyes, but only adult males have black fur. Females (including baby Malala) have orange fur. Photo by Rebecca Newton, Malala’s primary caretaker.

It is believed that fewer than 1,000 blue-eyed black lemurs remain in Madagascar, so having a strong genetic safety net is critical to ensure the species’ survival into the future. Having a second offspring from Velona and Mangomaso offers a bit of breathing room to a species on the edge of extinction.

Malala began following in her sister’s footsteps even before she was born. Just before her birth three years ago, Ranomasina was in a breech position, threatening the life of both mother and infant and necessitating an emergency cesarean section by the Lemur Center’s veterinarians. Initial evaluations of Velona showed Malala in that same breech position, complicating the pregnancy and making a natural birth risky. With that experience in mind, veterinary staff were prepared and knew exactly what to be on the lookout for as they monitored the pregnancy.

In the future, we will able to perform frequent low-stress ultrasounds throughout high-risk pregnancies using the smaller portable device purchased with donations from this year’s Valentine’s Day video. Generosity from hundreds of donors will allow our team to monitor babies’ growth while keeping mom nice and calm. 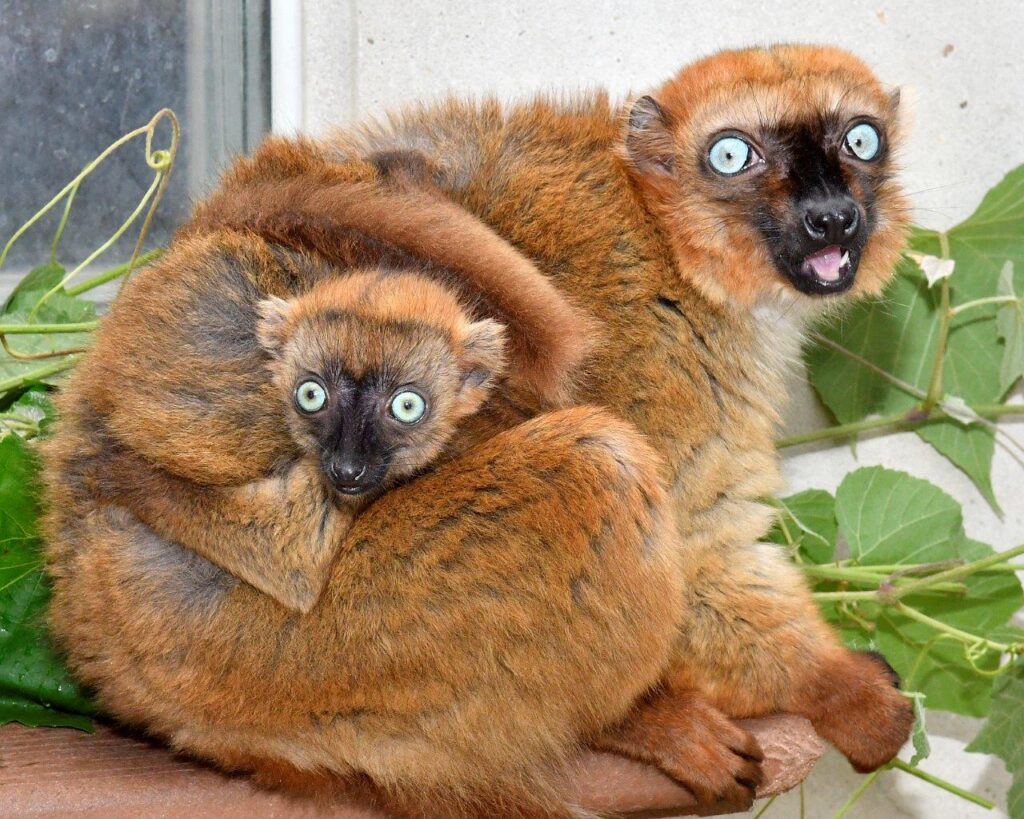 Ranomasina is a protective mother, so photos of Malala have been hard to come by. As the infant has become more independent, Ranomasina is a little more comfortable allowing people to observe and photograph her family. Photo by David Haring.

As the veterinary team prepared for Malala’s arrival, it was decided that the best course of action was to perform another cesarean section. While incredibly rare, C-sections have been performed successfully in the past by the Duke Lemur Center’s experienced veterinary staff and this one went as smoothly as possible.

On April 1, 2021, baby Malala entered the world. Since then, Velona has taken motherhood seriously, curling over her precious little one to hide her from any perceived threat – including any human who happens to linger too long near her enclosure. While we haven’t been able to capture many photographs of this infant, everyone is thrilled by how quickly she has grown under her mother’s attentive watch.

Malala has already begun experimenting with solid food and according to her primary caretaker Rebecca Newton, “tends to go for veggie chunks that are way too big for her.” We are sure that this extraordinary infant will be a veggie-eating pro in no time, and we cannot wait to watch her grow (as long as Velona lets us)!

The Duke Lemur Center has welcomed numerous infants this summer through our conservation breeding program, and we’re announcing five—yes, FIVE! —of the newest babies this week!

Here’s how to make sure you don’t miss ANY of these special announcements, or the accompanying photos and videos:

Meet our other BABY WEEK infants:

How you can help blue-eyed black lemurs

Send a “baby shower” gift: Make a lemur’s day by sending a special gift in Malala’s honor via the DLC’s amazon.com wishlist!

Contribute to little Malala’s “scholarship fund”: Did you know it costs $8,400 per year to care for one lemur at the DLC—including baby Malala?  We rely upon donations from individuals like you, who personally invest in our work to care for lemurs and protect their habitat in Madagascar. To learn more about the DLC’s “return on investment,” please see our stewardship booklet and 2020 director’s report.

Adopt a blue-eyed black lemur: If you want to learn more about blue-eyed black lemurs AND help support their care and conservation, please consider symbolically adopting through the DLC’s Adopt a Lemur Program! Your adoption goes toward the $8,400 per year cost it takes to care for each lemur at the DLC, as well as aiding our conservation efforts in Madagascar. You’ll also receive quarterly updates and photos, making this a fun, educational gift that keeps giving all year long! Adoption packages start at just $50. Please visit our Adopt a Lemur homepage to learn more.

A heartfelt THANK YOU for your support —we couldn’t do this work without you!