What Does It Mean to Be a Primate?

Humans have always been fascinated with our own origins. From creation stories to recorded histories, from family lines and family trees, to the discovery of our own roots in the primate order; we are always learning the story of humanity, and what it means to be human. Much of what we know about our evolutionary origins comes from the study of primates, our closest biological relatives. 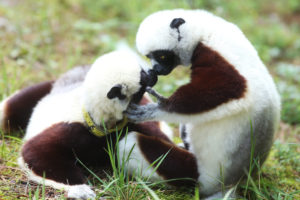 We share many of our physical and genetic characteristics with primates, but we also recognize similarities in behavior, sociality, and survival strategies. These similarities and the variation within the primate order can shed light on how human physiology and behavior came to be, and can teach us a great deal about the possibilities of the human body and mind. The more we learn about primates, the more we learn about ourselves. So if being human in part means being a primate, what does it mean to be a primate?

Back to the Beginning

The primate order is an extremely diverse group, encompassing not only a wide variety of shapes, sizes, adaptations, and cultures, but also spanning continents. We believe that the earliest primates got their start in Africa, over 60 million years ago.

Following these early primates was the emergence of more familiar primate groups like the lemurs, lorises, and bush babies, which are grouped into the strepsirrhine or prosimian family. Strepsirrhine primates were found in Asia, North America, and Africa–including the island of Madagascar. Lemur-like primates began migrating to Madagascar across the Mozambique channel as early as 55 million years ago, and continued to make the journey throughout the next 30 million years. 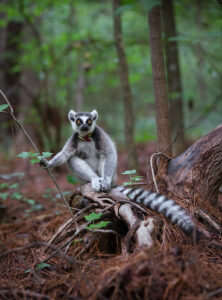 This migration event would turn out to be extremely significant, as lemurs would later go extinct everywhere except Madagascar. One possible reason for the eventual extinction of lemurs in mainland Africa and Asia is the emergence of the monkeys and monkey relatives (part of the haplorrhine or anthropoid family) that began to appear in the fossil record about 40 million years ago. To this day, lemurs remain on the island of Madagascar, and exist nowhere else.

Today, the primate order is divided into two main groups: the strepsirrhines and the haplorhines (also called prosimian and anthropoid, with minor differences). However, all primates (with some exceptions) share a basic set of characteristics. All primates have five-fingered grasping hands, fingernails, and forward facing eyes. Additionally, almost all primates have relatively large brains, longer life spans relative to other mammals, longer juvenile development, and are social. 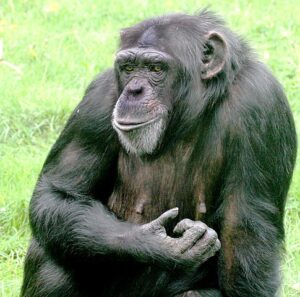 The strepsirrhines and haplorrhines are divided based on more specific characteristics. Strepsirrhines include lemurs, lorises, and bush babies (or galagoes). The name “strepsirrhine” refers to the curled, wet nose that members of these groups all share. This nose is more similar to that of earlier mammal groups, and is an indicator that strepsirrhines rely more on olfactory communication than haplorrhines, which have dry noses. 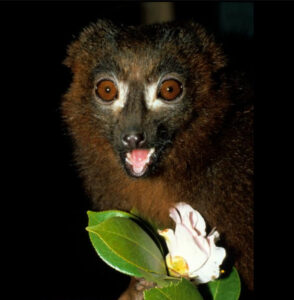 Almost all strepsirrhines have a tooth comb, wherein their bottom six teeth grow forward and out to form a comb-like structure at the front of their jaw. The tooth comb is used for grooming, and a secondary tongue called the sublingua is used to clean the tooth comb after use. Strepsirrhines also have a grooming claw on their index toe. Haplorrhines lack both of these features, and groom primarily with their dexterous fingers and opposable thumbs. 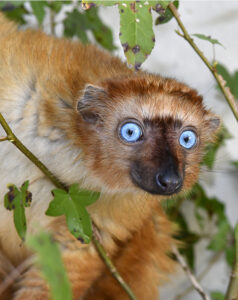 The long snout of a blue-eyed black lemur. Photo by David Haring.

While the primate order is incredibly diverse and encompasses a wide range of unique characteristics and incredible adaptations, all of the species both living and extinct are part of the same story. By studying primates we can come to understand how some of these characteristics that exist in humans—such as higher intelligence, social cultures, even color vision—came into being, and were maintained in the genome for millions of years. The incredible discoveries we have made by studying primates over the last few decades have truly altered human history, and continue to do so, by challenging our understanding of metabolism, aging, disease, and so much more. 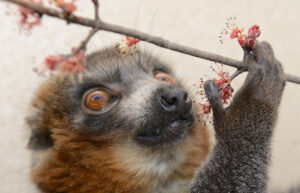 Additionally, studying primates allows us to be better caretakers of the species we share our planet with. There are approximately one hundred identified lemur species in the world today, and nearly all of them are threatened in some capacity. According to the IUCN, approximately 60% of primate species are vulnerable, threatened, endangered, or critically endangered. Primate research is just as crucial for primate conservation as it is for the furthering of knowledge, and if these species disappear from the planet, it will be a great loss to humanity as well as to our global ecosystem.

By learning all that we can about primates in ways that are supportive of their well-being and survival, we can continue to protect them in the wild, and continue the story of what it means to be human.