All in the Family: Learning Lemur Classifications

From three inches tall to three feet tall; from fat-tailed to bushy-tailed to no-tailed, the lemur family boasts incredible diversity. With 108 species living today, lemurs have spent over 60 million years adapting to the various habitats of Madagascar, resulting in an amazing range of shapes, sizes, and specializations. While lemur species are still being categorized, renamed, and even discovered, lemurs are generally categorized into five families, which are divided based on shared characteristics and genetic similarities. 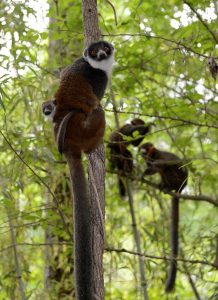 Lemurs belong to the Primate order, along with monkeys, apes, and humans. Within that order, they share a suborder called Strepsirrhini (meaning “curled nose”) with relatives like lorises and bush babies. Within Strepsirrhini, lemurs are separated from the lorises and galagoes into a superfamily called Lemuroidea, which contains five families representing the extinct lemur species and five different families that categorize the 108 extant (still living) lemur species: Daubentonidae, Cheirogalidae, Indriidae, Lepilemuridae, and Lemuridae. These families are divided based on genetics and physical characteristics. 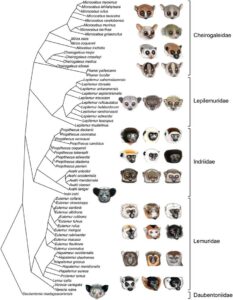 A Look at Lemuridae

The Lemuridae family is one of the better-known lemur families. The members of this family are all larger, diurnal (day-time active) lemurs and are divided into five smaller genus groups: Eulemur, Varecia, Hapalemur, Prolemur, and Lemur.

The genus Eulemur means “true lemur,” and includes twelve species, like blue-eyed black lemurs, mongoose lemurs, and crowned lemurs. These lemurs share characteristics such as sexual dichromatism, where males and females of the same species have different coloration. 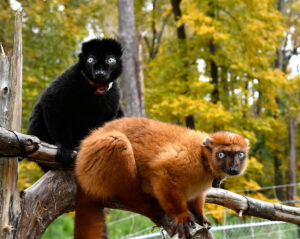 The Varecia genus is a little different from Eulemur in that they are larger, fluffier, and louder! Varecia like the red ruffed or black and white ruffed lemurs have a thick coat to help them stay dry in the rainforest and a loud voice to warn of approaching predators. 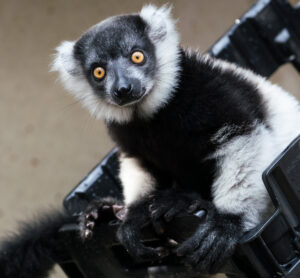 Genus Hapalemur are the bamboo lemurs, which move vertically through the trees and feed primarily on bamboo. Another type of bamboo lemur, the greater bamboo lemur, belongs to its own genus called Prolemur. 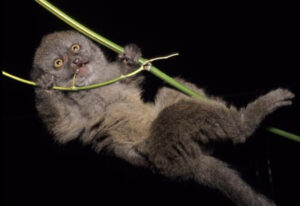 Finally, the most well-known member of the Lemuridae family is Lemur catta—the ring-tailed lemur! This lemur is well known for its stripy tail and makes up a genus all its own. 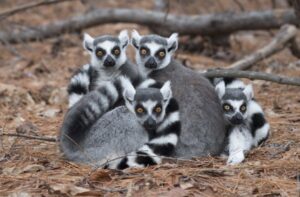 The Indriidae family is also a large, diurnal group and includes the biggest living lemurs in Madagascar: the indri. The indri (scientific name Indri indri) can stand up to three feet tall and has a beautiful whale-like song. Despite its impressive size, the indri has the shortest tail of any living lemur species—almost no tail at all!

The indri’s close cousins, the sifaka lemurs, belong to the Propithecus genus. All of the Propithecus lemurs are commonly called “sifaka” after the sneeze-like sound that they make. 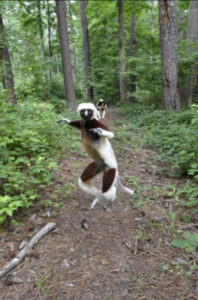 What’s the largest AND smallest of the lemur families? Not a trick question: It’s Cheirogalidae! This family is made up of five genera and around forty species, all of which are small, nocturnal lemurs. The smallest of all of these is genus Microcebus: the mouse lemurs. Mouse lemurs come in tiny (Microcebus) and giant (genus Mirza) sizes, but the smallest primate living today is Madame Berthe’s mouse lemur, measuring only 3 inches long. 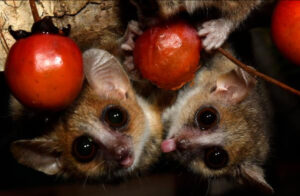 The larger cousins of the mouse lemur are the dwarf lemurs, which belong to genus Allocebus (hairy-eared dwarf lemur) and Cheirogaleus (fat-tailed dwarf lemurs). Dwarf lemurs go into a torpor state during the dry season in Madagascar, which earns them the title of the world’s only truly hibernating primates. The largest of the small Cheirogalidae family is the fork-marked lemur (genus Phaner), named for the black stripes on its head. 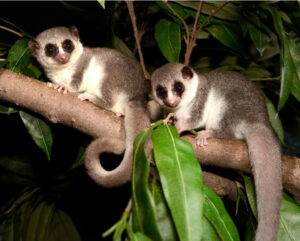 Every family has its one black sheep, except for family Daubentonidae—it has only one member! The wonderfully unique aye-aye is the only living member of this family and boasts, among other excellent qualities, a mouthful of a scientific name: Daubentonia madagascariensis. The aye-aye also has a mouthful of its own, being the only lemur species to have rodent-like incisors. The aye-aye’s strong, ever-growing teeth allow it to chew into hard wood and extract grubs and insects with its flexible tapping finger. Once thought to be a rodent, the aye-aye is now at home among its fellow lemurs in the Superfamily Lemuroidea. 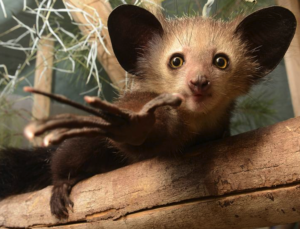 No matter how big, small, sleepy, or strange, all of these incredible animals belong to the lemur family, which makes up about 20% of all primates. There is still so much to learn about lemurs and their evolutionary history, and new things are being discovered all the time! Unfortunately, the lemur family tree is in trouble. 31% of lemur species are critically endangered, and many more are endangered or threatened. As our understanding of lemur diversity grows, it is crucial that our conservation efforts grow as well, so that none of these lemur species become a thing of the past.