Some say that the island of Madagascar is like a time capsule—a place where the echoes of prehistoric wildlife are still heard in the jungles and spiny deserts. Some call Madagascar the Eighth Continent, referring to its size and scale of biodiversity. Within this California-sized Eden resides a menagerie of organisms found nowhere else on Earth—many whose ancestors arrived on the island tens of millions of years ago, and stayed put ever since. While 90% of plants and 85% of flightless animals living in Madagascar are endemic, many of them also share another far more unfortunate commonality: they are disappearing, fast. 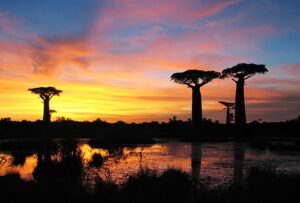 Lemurs have long been the face of conservation in Madagascar. Nearly all of Madagascar’s approximately 100 lemur species are threatened, and they are one of the most well-known residents of the island. With bright eyes, incredible beauty, and fascinating behavior, these forest-dwelling primates are serving as ambassadors for conservation projects all over the country. But it’s not only their charisma that contributes to the cause. Lemurs are an integral part of their environment as seed dispersers and pollinators, helping reforestation efforts just by existing. Like all wildlife, lemurs are one piece in an ancient and precarious puzzle, connecting all of Madagascar’s amazing biodiversity.

While it’s harder to root for the predators that feed on the charismatic wildlife, the disappearance of lemurs is adversely affecting populations of large carnivores like the fossa and the Madagascar fish-eagle. Losing a significant part of their daily diet is one thing, but both of these predators are also suffering the same losses that the lemurs are in the face of habitat destruction. So much of Madagascar’s wildlife is dependent on the forests, which are being gradually cut down in order for the people of Madagascar to have enough to eat. Everyone’s got to eat—humans, lemurs, and predators included. But without forests, eagles can’t nest, fossas can’t hunt, and farmland becomes degraded and erodes, making deforestation a problem for everyone. 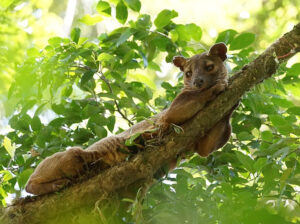 Things aren’t necessarily easier on the ground. While trees play an important role for many animals in Madagascar, other species rely on precipitation and water sources to thrive. The Golden Mantella frog lives in fragments of wetland habitat in the midst of an area heavy with mining activity. These tiny frogs rely on breeding pools to lay their eggs every year, but these pools and the surrounding habitats are disappearing as mining operations increase. Thanks to the efforts of dedicated conservationists, the mining groups most active in these areas are taking pledges to protect the golden mantella and restore these habitat areas when the mining is finished. Captive breeding programs and reintroduction within the fragmented areas are ongoing, and while success is uncertain as of yet, the efforts are encouraging. 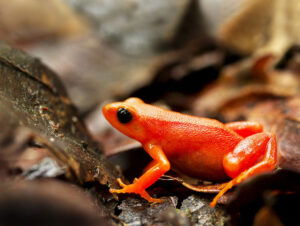 Conservation work takes time. Replanting forests, undoing damage, and changing attitudes toward wildlife use are all slow business—and no animal knows this better than the radiated tortoise. Many communities in Madagascar are making efforts to protect local wildlife, and the culture of each region and even each village of Madagascar comes with its own set of rules for respecting the animal residents in that area. But often these cultural protections and local conservation efforts can’t match up to larger, outside operations. 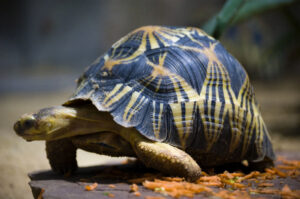 Radiated tortoises can be sold for huge amounts of money in the international exotic pet trade or closer to home as a restaurant delicacy. Poachers are known to capture and sell hundreds of thousands of these and other critically endangered tortoise species in Madagascar, either to sell as meat or as pets on the black market. Many conservation groups and local activist groups are fighting for the radiated tortoise, releasing seized tortoises back into the wild, and calling for action from the authorities. With hope and hard work, the radiated tortoise won’t be left in the dust when it comes to saving species.

The Face of a Movement

Currently, the majority of Madagascar’s plants and animals are threatened with extinction. While lemurs are just the tip of the iceberg when it comes to conservation needs in Madagascar, they serve as excellent ambassadors and umbrella species—inspiring conservation efforts that can benefit the rest of their fellow organisms. Incredible work is being done in Madagascar to protect the precious biodiversity remaining, from lemurs to tortoises and everything in between. 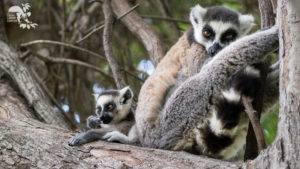 Razafison, Rivonala. Can a mine and a community group save the tiny golden mantella frog? Mongabay 14 July 2020.