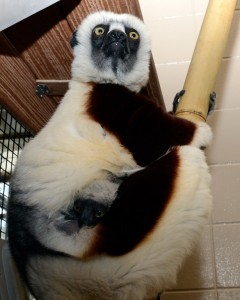 Baby Isabella’s face peeks out from her mother Pompeia’s hip, where she likes to ride. Her dad, Charlemagne, is the son of Jovian, who was famous as Zoboomafoo.

March 2, 2015 — A little more than two months after the TV-star lemur known as Zoboomafoo died at age 20, his fifth grandbaby — a girl — has been born at the Duke Lemur Center.

Her name is Isabella, and she’s doing great.

Her grandfather’s real name was Jovian, and his legacy lives on in seven surviving offspring and five grandbabies, as well as syndication of 65 beloved episodes of the PBS children’s show Zoboomafoo that Jovian starred in from 1999 to 2001.

Isabella is a female Coquerel’s sifaka, a type of lemur found only on the island nation of Madagascar. She was born to Jovian’s oldest son, Charlemagne, and his mate, Pompeia, at the Duke Lemur Center on Jan. 25, 2015, at 3:00 a.m.  weighing a healthy 3.8 ounces (110 grams). Baby and mom received a clean bill of health from veterinarians.

Though she is Jovian’s fifth grandchild, Isabella is the first to be born at the Lemur Center.

Lemur Center veterinarian Dr. Cathy Williams said that successful births like Isabella “really embody what we try to do here at the Lemur Center, which is to breed these animals that are extremely endangered in the wild, to learn about them, to give them a good existence and to try to prevent them from going extinct.”

Only a few thousand Coquerel’s sifakas likely remain in the wild, and they are listed as endangered under the IUCN Red List of Threatened Species. Habitat loss due to slash-and-burn agriculture, poaching for meat and even climate change threaten more than 90% of all lemur species in Madagascar.

Slightly more than 60 Coquerel’s sifakas live safely in captivity, all in the United States, and each one is managed by the Duke Lemur Center. About half live at Duke and the rest live across the country on loan to accredited zoos.

When TV hosts Chris and Martin Kratt wanted to include a real sifaka in their children’s show, they built a special set at the Duke Lemur Center to tape segments with Jovian. He also had a puppet as a body double.

Jovian died Nov. 10, 2014, due to kidney failure at 20.5 years old. Millions of people online expressed sympathy and support when the news of his passing became public. The name Zoboomafoo was trending on Facebook and Twitter in the United States for several hours as news spread of the loss.

As Isabella’s due date approached in January, lemur keepers checked mother Pompeia every morning for a new baby. Early on Jan. 25, keepers discovered Pompeia sitting high up in her suite with the baby clinging tightly to her tummy.

Lemur keepers and veterinarians keep a close watch on newborn lemurs for signs of illness. They have observed Isabella clinging tightly to mother’s abdomen and nursing, and she continues to gain weight — all signals that the baby is healthy and mom is providing good care.

After a week to allow mom and baby to bond, dad Charlemagne — Charlie to his keepers — was slowly introduced to the infant. Within a few days Pompeia was letting him groom and lick the infant. The family now spends all day together while keepers observe the family’s interactions. 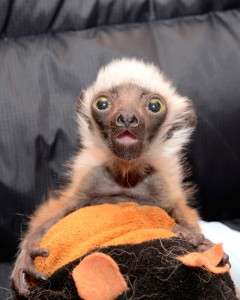 “Charlie put his head down close to the baby and started to sing to the baby,” said keeper supervisor Britt Keith. Coquerel’s sifakas use quiet, soft vocalizations – a low “coo” – as they greet one another and touch noses. “He’s going to be a great father, just like his father [Jovian] was.”

Visitors to the Duke Lemur Center might be able to see the new family as part of the Lemurs Live tour, which is available daily by appointment only.

Isabella also will be on display during Lemur Week, March 28-April 4, which features a special cocktail reception and fundraiser called Jovian’s Jubilee, in celebration of Jovian’s life and conservation legacy.  Visit the center’s website for  Lemur Week schedule of events and reservation information.

To help support Isabella and all the Coquerel’s sifakas at the Duke Lemur Center please consider the “adopt a lemur” program. https://www.gifts.duke.edu/lemur_share