Protecting lemurs during a pandemic 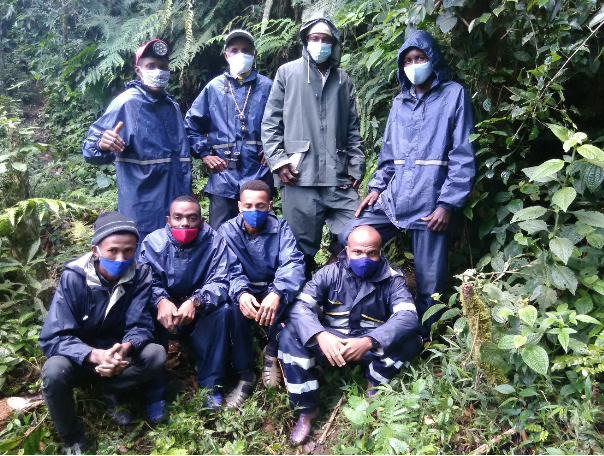 The team of lemur conservationists in the forest of COMATSA during the most recent mission.

Madagascar is a biodiversity treasure, with thousands of endemic species, diverse ecosystems, and a wealth of natural resources. Unfortunately, habitat loss and degradation threaten the diversity of Malagasy wildlife, with negative repercussions for human well-being. Most communities on the forest frontier depend on forests for ecosystem services including provisional services like clean and permanent water sources, timber for construction and firewood, medicinal plants, and much more. Cultural services include the significance of the forests for historical reasons, such as the presence of ancestral tombs in the forest. Malagasy farmers on the forest frontier rely on the agro-ecosystem to produce crops to feed their families and sell in markets. People also fish and hunt using traditional methods. Therefore, the successful management of the diverse natural resources requires a strategic action plan that integrates these complexities of natural and human dimensions.

The World Wildlife Fund (WWF) manages the COMATSA protected area in northeast Madagascar, with the COMATSA-Sud portion directly connecting Marojejy, Anjanaribe-Sud, and the Tsaratanana Massif, encompassing 82,234 hectares (see map below). WWF has conducted biodiversity inventories with a focus on lemurs, especially silky sifakas, Propithecus candidus, since 2015. In collaboration with WWF and DLC, we at CURSA and the local forest managers (known as COBAs), have been conducting lemur monitoring and socio-cultural surveys at nine localities. Our goal is to understand the diversity and abundance of lemurs, the quality and viability of their habitat, the types and frequency of natural resources used, and socio-cultural focus groups about hunting practices. With the knowledge we gain from this research, we are co-creating management strategies with the local COBAs to have a place-based approach to conservation that combines ecological and social dimensions. 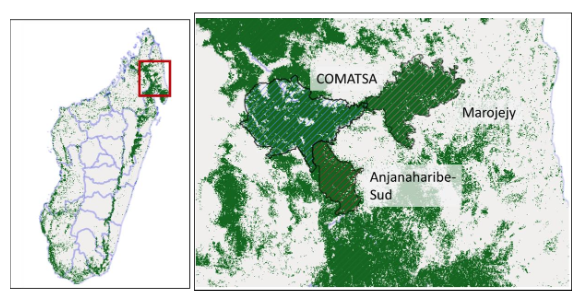 Map of the study area, showing forest cover in green, and the protected areas with hatching polygons. The COMATSA connects Marojejy in the east and Anjanaharibe-Sud to the southwest.

The COMATSA is a corridor of rainforest in northeast Madagascar connecting other protected areas in one of the largest contiguous tracts of natural environment left on the island. The forest is home to at least 12 lemur species and likely others that have yet to be discovered. The viability of lemur populations is threatened by anthropogenic degradation such as logging, clearing for agriculture, and hunting. Our goal is to determine the viability of lemur populations in the COMATSA, especially focusing on the silky sifaka, Propithecus candidus. We will develop a strategic action plan for effective conservation and community-based sustainable development with local stakeholders surrounding the forest.

In December 2020 and June 2021, we conducted missions at two sites that represent different levels of remoteness. In earlier surveys, we found that these two sites both had high diversity of lemurs, with 10-12 species observed. One site had higher levels of anthropogenic threats, including 43 instances of pressures such as traps set for lemurs (9), selective logging (6), and clear-cutting for agriculture (14). The other site had a much lower level of pressure, with only 23 instances observed and only one lemur trap. This served as a good comparison to understand how human pressures are affecting lemurs.

Left: The hairy-eared dwarf lemur, Allocebus trichotis, is a rare and elusive species. We had many observations of this species, proving that they are quite abundant in the COMATSA and making this area important for the conservation of the species. Middle: The silky sifaka, Propithecus candidus, is Critically Endangered. It is only found in the SAVA region, and the COMATSA is an important corridor that can maintain a dispersal route for animals between other protected areas. Without the COMATSA protected area, other parks would be like isolated islands surrounded by a sea of grass. Right: The sportive lemur, Lepilemur seali, is another species only active at night. Though this is also a rare species in many parts of its range, we found they were quite abundant as well. Photos by Edgar Rabevao.

The target lemur species, the silky sifaka (P. candidus), was directly observed at both sites, but more often at the less disturbed site (4 groups) than the high disturbance site (2 groups).

Table 1. Number and list of nocturnal and diurnal species directly observed at the two sites.

+ Although there were no sightings of Daubentonia, characteristic feeding traces were found in dead wood confirming that they are present but very rare.

The habitats in which lemurs are found are quite diverse in terms of tree species. We use botanical plots to measure the tree species diversity and density and have found that these habitats host 80-109 species of trees. This is very impressive, and important for the viability of lemurs, since some species, like Propithecus, may eat from 50-70 different species of trees.

The threats to P. candidus and other lemur species viability include extensive clearing of forest for agriculture, hunting lemurs using snare traps, and selective logging of hardwoods. Farmers use shifting agriculture to clear forest to grow primary food crops like rice and cassava. However, recently, there has been an increase in forest clearing for cash crops. Vanilla has been an important cash crop in SAVA for over one hundred years. It is sold for a relatively high price (10-20 USD/kg of unprocessed vanilla bean) which is good for farmers because they are poor (>75% make less than 2 USD/day). Vanilla grows best in the shade of forest, so farmers selectively cut trees to plant in the understory. Another crop that has been increasing in the COMATSA is marijuana. It is illegal to grow or sell marijuana, and we believe that people from far away come to the forest to grow it in secret and then sell it in the bigger towns and cities.

Selective logging for timber is increasing during the pandemic because the economic crisis is pushing people to try to make money any way they can. Many people go to the forest to collect trees, which they fashion into planks and sell in markets.

Finally, lemur hunting is a growing problem. Food insecurity and the need for iron and protein-rich foods lead people to use traditional fishing and hunting techniques to acquire meat. We found evidence of many locally-made snare traps in the forest, which we destroyed.

Left: Hunters use snare traps to catch lemurs. Whenever we find traps in the forest, we destroy them. We discuss the laws against lemur hunting with the local forest managers and communities. People still use traditional hunting methods because they report that they do not have enough food to eat. Middle: Forest was cut and burned in the past using traditional practices. In the foreground, rice grown this year is almost ready to harvest. In the middle and background, secondary forest regrows after previous years of farming. While this method might have been sustainable in the past, when long fallow periods allowed forest to regrow between harvests, today fallow periods are too short (2-3 years), resulting in rapid erosion of soil, decreasing yields, and the need to move on and clear new forests. Right: Trees are cut and processed into planks in the forest.

To obtain information on natural resource use by local people, one team of researchers conducted interviews in the villages and discussions of the local laws (Dina) related to logging and to hunting. We also gleaned ideas from the communities on the alternatives to hunting. During the focus groups, the participants were divided into 3 groups: adult men, adult women, and adolescents of mixed gender. In each of the two sites, 52 – 115 groups of 348 – 780 residents participated.

In general, hunting is common in these two sites. In 83-90% of focus groups, participants reported hunting mammals, and 31-48% reported hunting lemurs. Other common animals hunted include tenrecs (~80%), as well as carnivores such as the fossa. Fossas are sometimes hunted to eat, but more often because they sometimes raid the farmers’ chicken coops. Wild boars are also sometimes hunted, as well as many birds, fish, eels, shrimp, and crabs. People report hunting animals with snares, slingshots, hunting dogs, and even guns, though more rarely.

We asked what alternatives people envisioned if there were no wild meat; for example, if laws restricting hunting were enforced, or if the wild animals were locally extirpated. Interestingly, a variety of suggestions were made, including improved husbandry for livestock, poultry, and fish farming, but also plant-based alternatives including the highly nutritious leaves of the Moringa tree as well as beans. It was notable that at the least disturbed site, men and children had many ideas for alternatives but women did not have any ideas, while at the other, more disturbed site, men, women, and children all had diverse ideas for how to cope in the future if wild meat were no longer available. 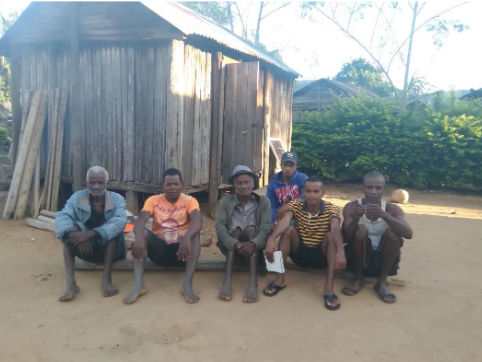 During a focus group with village elders, our team learned about the traditional uses of the forest, including how people have hunted for generations. We respect and appreciate these traditions. However, the elders also told us that they know the forest and the animals are disappearing because they have seen it over the years with their own eyes. They know they must develop alternatives for a more sustainable future, and wish to partner with us to realize their goals.

During the mission, our team members conducted environmental education with the primary schools, reaching 50 students at each school. Posters were given to the schools explaining why lemurs are important, the diversity of species found in SAVA, and agroecology methods that could improve the yields of staple crops and decrease pressure on natural resources. The children use activity and coloring books to learn more about lemurs and create their own posters which they display at the schools.

We also hosted educational events open to the whole community, which were well attended. We discuss natural resource management, the importance of lemurs, explain that they are endangered due to habitat loss and hunting, and alternatives to current traditional subsistence techniques. We played videos in Malagasy that explain the value of biodiversity, the threats in Madagascar, and sustainable solutions. Agricultural training videos explain how to transition from shifting to permanent agriculture, and improve the yield and food security. 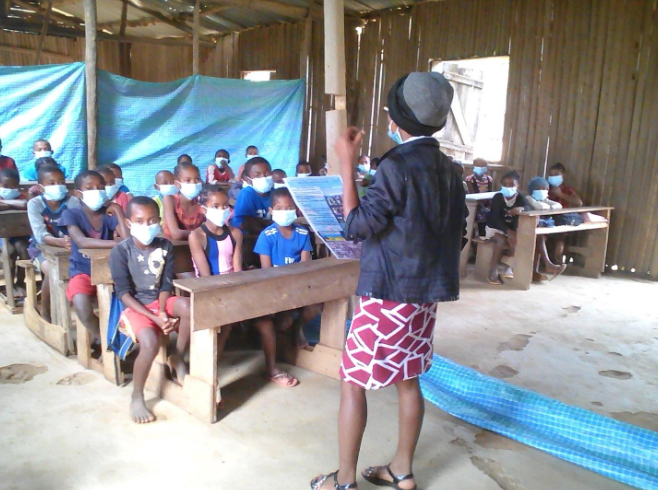 Our team conducted lemur awareness campaigns with the primary schools to teach about lemurs, why they are important, and that it is illegal to hunt them or keep them as pets. Many of the children knew only about one or two kinds of lemurs, and they were fascinated to learn that there are more than 100 species! The children were always enthusiastic and interested, asking many questions and wishing to take nature walks in the forest to see the lemurs themselves. 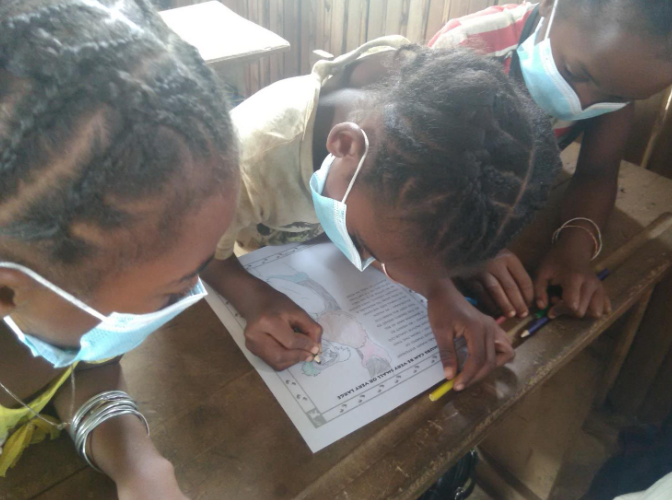 Children loved the lemur coloring books we brought, which was a chance for them to have fun while they learned about lemurs.

Summary and Next Steps

These two missions are only the beginning of a long-term project which we will continue during the coming years. We will use the data we collect to complete our graduate degrees. We will also continue to return to these communities to co-create the strategic action plans for sustainable resource management with the stakeholders. Our mission is to improve the lives of the local population such that they will not need to rely completely on forest products for their livelihoods. When people have food security, good health, and good education, they can find many alternatives to the unsustainable farming, logging, and hunting that we see today. It is our hope that we can reverse the degradation of natural environments and lead to a better future for the coming generations, a future with plenty of resources for all, people and lemurs!

We wish to acknowledge the generous support of the Knox family which has allowed us to conduct this research. We are also excited to announce that we were recently awarded a grant from Re:wild to continue more lemur surveys for the rest of the year. We thank the local communities that welcomed us into their homes and helped us with this research, gave us their important insights about natural resources, and invite us to continue coming back in the future.