January 25, 2013 — Join the staff of the Duke Lemur Center (DLC) in welcoming our newest Coquerel’s sifaka – Beatrice of Swabia (Beatrice for short): 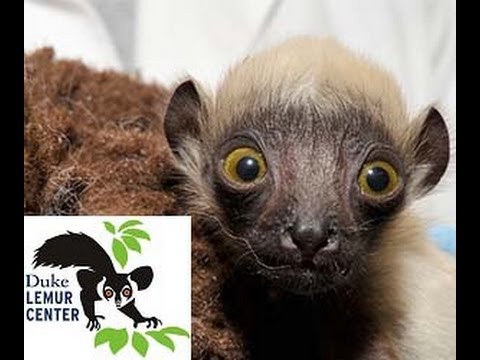 Born December 19, 2012, Beatrice weighed 107 grams at birth – a perfect weight for a newborn sifaka. She is in excellent health and growing leaps and bounds, weighing 257 grams at her last weighing appointment. She was born to parents Rodelinda (5 years old) and Marcus (8 years old) and also lives with her sister Bertha of Sulzbach (23 months old). Rodelinda’s family all received names from figures in the Holy Roman Empire, hence Berttha’s and Beatrice’s interesting titles. All is well with the family. Beatrice is spending most of her time clinging to Rodelinda, but Marcus and Bertha are also getting some time to groom and hold the infant.

Beatrice has been steadily gaining weight and clinging tightly to her mother’s fur, both signs of a healthy infant. Keepers and veterinarians weigh infants daily for the first 3 days then again on day 5 and 7, then twice a week until a month old, followed by weekly weighing for the next few months. After that, the infant is placed on the adult weighing schedule of every month. Regular weighing helps the staff ensure that the infant is thriving.

New babies, like Beatrice, are incredibly valuable to the continued research and conservation of this species. Coquerel’s sifakas represent the only lemurs in the family Indriidae in captivity in North America, a diverse family of lemurs including ten diurnal species known for their unique sideways, ballet-like form of locomotion. The sifakas at the Lemur Center are also some of the only leaf-eating lemurs in captivity making comparative studies on diet and nutrition possible. Coquerel’s sifaka are endangered in the wild. Deforestation and hunting for food threaten their daily existence in Madagascar where only roughly 10% of the island remains as native vegetation. In the past, sifakas were protected by local taboos against hunting; however, as cultural stigmas and superstitions break down in Madagascar, more people turn to sifakas as a food source.

Andrea Katz, the DLC animal curator, explained that the Duke Lemur Center was the first place to ever successfully breed sifakas. “Sifaka are really one of the Lemur Center’s flagship species,” she said. “We’ve learned a lot over the years about sifaka behavior, breeding behavior, mother-infant behavior…I think it’s fair to say that the Lemur Center is really viewed as the expert on sifaka breeding management.” Only 56 Coquerel’s sifakas live in captivity. The Lemur Center owns every single one and manages them either on-site or through cooperative breeding loans with 9 other institutions across the United States. The Lemur Center’s Registrar and Photographer, David Haring, is the Coordinator for the Association of Zoos and Aquariums’ Species Survival Plan for sifaka. The threshold for a sustainable captive population is set at 50 breeding individuals, so the population is hovering at the edge of sustainability. Still, with the world’s experts on sifaka care and more than half of the captive sifaka housed at the DLC, Beatrice has a bright future ahead.