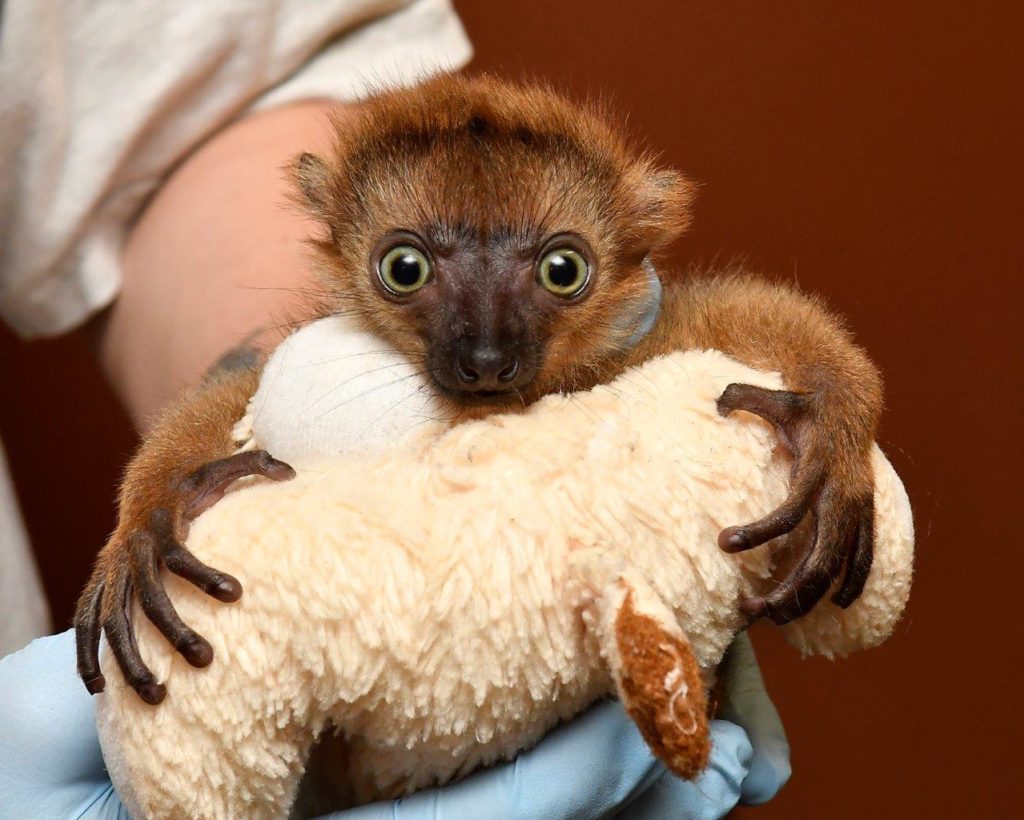 Ranomasina, whose name means “sea” in Malagasy, was delivered via caesarean section on April 12, 2018. She is the first offspring of Velona and Mangamaso, the first lemurs imported from Madagascar to the U.S. in 24 years. Photo by David Haring.

DURHAM, N.C. — Because they’re endangered, all baby lemurs are special. But some, like Ranomasina, are extraordinary.

“This is not just any baby,” says Bobby Schopler, a veterinarian at the Duke Lemur Center since 2005. “This is the most important birth in the 13 years I’ve worked here.”

Baby Ranomasina is the third blue-eyed black lemur — one of the 25 most endangered primates in the world — born at the center this season, which brings the total number of her kind in North America to 34. But she is also considered among the most “genetically valuable,” since she is the offspring of the first lemurs imported from Madagascar to the U.S. in 24 years.

Ranomasina is also unusual because she was delivered via cesarean section, a surgery so rare that since the Duke Lemur Center’s founding in 1966, C-sections have been performed only 15 times.

“She’s the most important offspring from one of the rarest lemur species,” Schopler said. “She was born to a pair that took us three years to bring to Durham from Madagascar, and we may never be able to import anymore.”

In fact, Ranomasina is genetically so valuable to the population of these critically endangered lemurs that when she was discovered in breech position, veterinarians resolved to perform a rare C-section rather than risk a difficult — and potentially fatal — birth.

The infant, whose name means “sea” in Malagasy, is the first offspring of Mangamaso and Velona, blue-eyed black lemurs brought from Madagascar to the Duke Lemur Center in 2017.

Until Ranomasina’s birth, every blue-eyed black lemur infant born in North America had descended from just seven wild-born individuals imported by the Duke Lemur Center in 1985 and 1990.

“With the birth of Ranomasina, for the first time since 1990, we have a whole new lineage of blue-eyed black lemurs coming into the North American population,” said Cathy Williams, curator of animals at the Duke Lemur Center.

While the current captive population is healthy, new genetically unrelated individuals like Ranomasina are critical to grow and sustain it. “The more genetically diverse a population is, the more resilient it is, the healthier it is, and the better it can adapt to environmental pressures,” Williams said.

Fewer than 1,000 blue-eyed black lemurs are believed to remain in Madagascar today. In 2015, it was estimated that the species could go extinct in the wild in as little as 11 years.

But as crucial as she is to the genetic health and long-term survival of her species, Ranomasina’s own survival was initially uncertain.

Two weeks before her due date, Velona was evaluated by the Lemur Center’s veterinary team, who discovered the infant was in breech position.

“There isn’t a lot of data regarding breech births in lemurs,” said center veterinarian Laura Ellsaesser. “In humans, babies in breech position are a concern because they are more likely to become stuck in the birth canal, which can become life-threatening to both the baby and the mom.”

“Sometimes in humans, a breech baby does flip and do just fine,” Ellsaesser said. “But in lemurs, we just don’t know; so we put Velona on a much more aggressive baby watch.”

David Watts and his adviser Lisa Paciulli of North Carolina State University, who use concealed cameras to study maternal behavior in aye-ayes, contributed some of their equipment to the cause. “Using David’s cameras meant that we didn’t disturb her,” Ellsaesser said. “We could watch and, if we saw signs she was having a difficult labor, we could intervene.”

Duke Lemur Center husbandry and veterinary staff watched round-the-clock, but Velona showed no signs of labor. At 130 days’ gestation — past her expected delivery date — Ellsaesser and Schopler did an ultrasound. The infant was alive but still breech.

“We knew from thirty years of data that any blue-eyed black lemur infants born after 130 days’ gestation were stillborn,” Schopler said. “We were torn between not wanting to do a C-section on a first-time mom, versus possibly losing the baby and the mom in a difficult birth. Ultimately we decided that, all things considered, the lower risk was to deliver the infant via C-section.”

The C-section was performed on April 12, proceeded smoothly, and resulted in the birth of a healthy little girl weighing just under three ounces. But for mom and infant, the hard part had only just begun.

“She fell asleep without a baby and woke up with one,” said Schopler, who spent the night in the veterinary office to monitor Velona’s behavior toward the infant. Velona’s recognizing and accepting the baby would be crucial to Ranomasina’s survival. If her mother didn’t bond with her, she could have attacked and damaged the tiny infant. 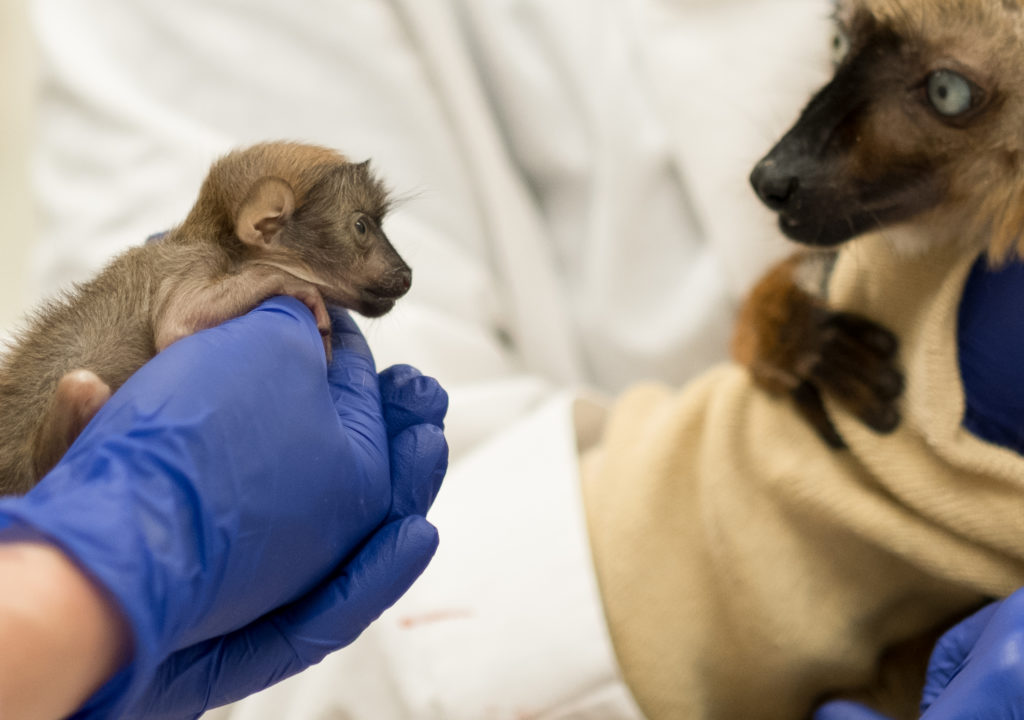 Ranomasina and Velona hours after birth. As for any major procedure involving highly endangered animals, the veterinary staff consulted experts from a variety of specialties. In Ranomasina’s case, information was sought from Elley Schopler, a lactation consultant at The Women’s Birth and Wellness Center (Chapel Hill, NC), who updated the Lemur Center on the latest methods of post-partum care of C-section babies. Photo by Sara Clark.

C-section aside, having babies is partly a learned behavior for lemurs and infant mortality is higher in those born to first-time mothers.

It took about 24 hours for Velona to adjust to her infant and for the veterinary staff to teach Ranomasina how to nurse. Once she learned, the hormones released during nursing helped further solidify the mother-infant bond, and the animal care team breathed a collective sigh of relief.

“Even though it took a while, Velona formed a tight motherly bond with her baby,” Newton said. “Once it was there, it was there. She’s been a good mom. I’m very pleased, very proud of her.”

Now over a month old, Ranomasina is thriving. Her dad Mangamaso has been successfully reintroduced to the family group, and the infant has begun nibbling solid food and venturing tentatively away from Velona — though never far from the safety of mom.

“This female infant has a huge responsibility in front of her,” Schopler said, but for the next 2.5 years she’ll grow and learn from her mother before being paired with a male to start a family of her own.

“It’s really exciting for the staff to be part of this,” Williams said. “It reinforces why we work here and why we’re so committed to what we do. We’re part of something much larger. Saving these animals is our contribution to making the world a better place for future generations.” 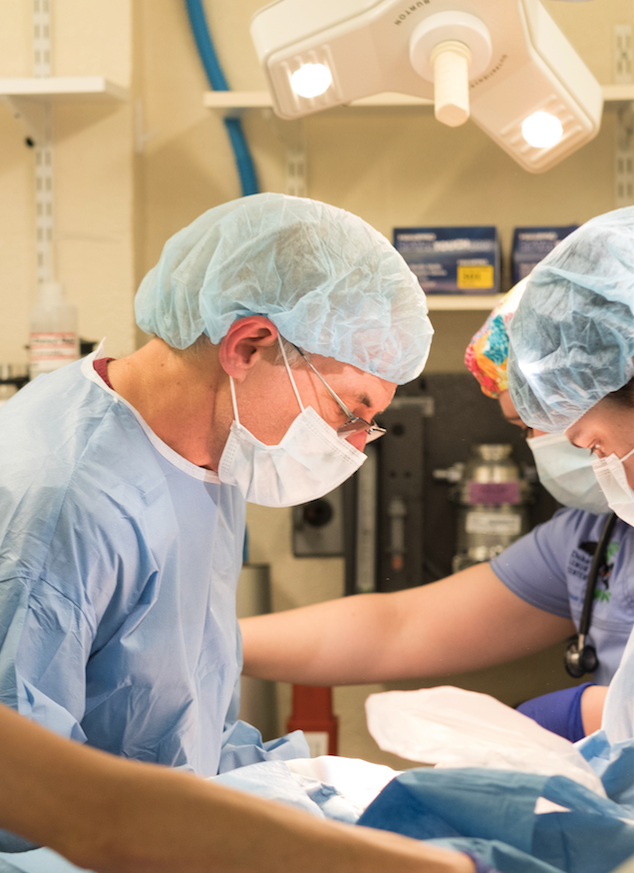 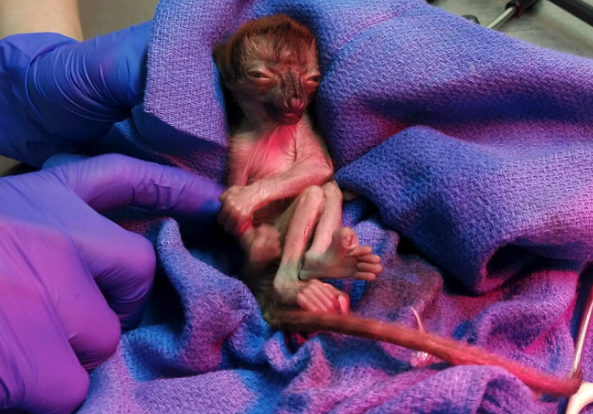 Ranomasina immediately after delivery. The infant’s birth was especially meaningful to Lemur Center Director Anne Yoder. When Yoder began directing the DLC in 2006, lemur births had been extremely rare at the center over the previous decade, almost as rare as the importation of lemurs from Madagascar. “Two of my top goals when I assumed the directorship were to see babies being born at the center again, and to once again import animals from Madagascar to stabilize genetic variation in the colony. Ranomasina is the realization of both goals, and in the most beautiful little creature you have ever seen.” Photo by Catherine Ostrowski. 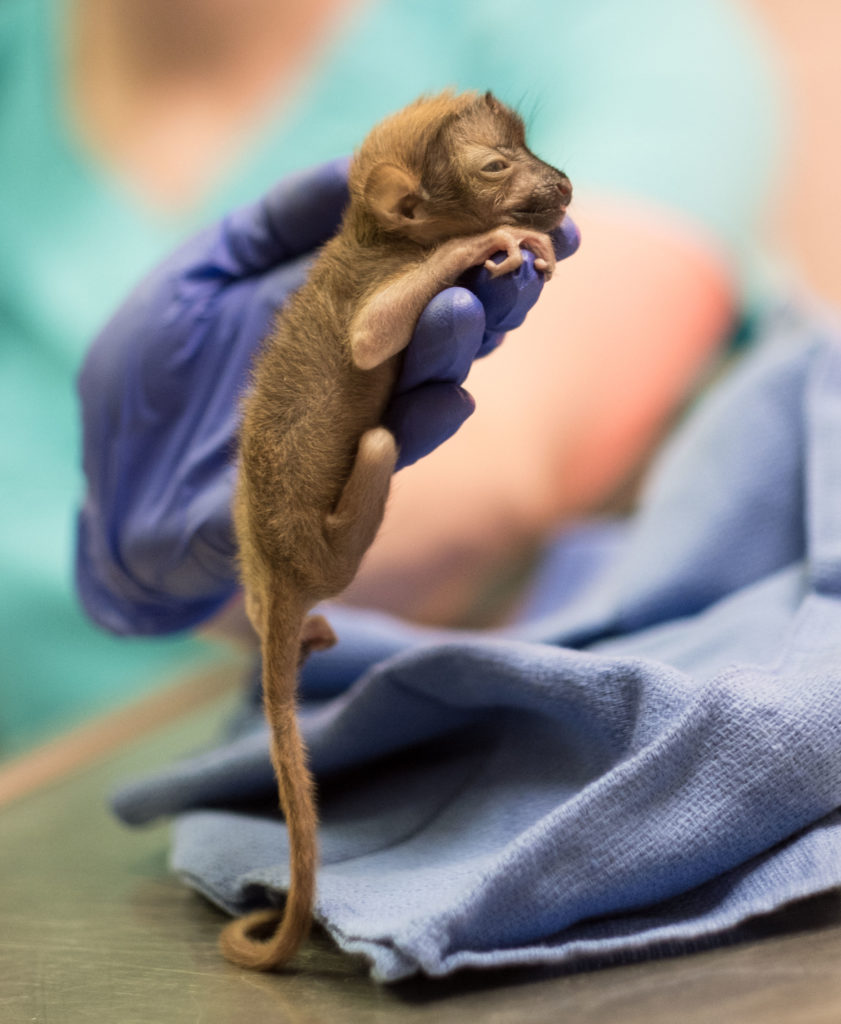 Ranomasina shortly after birth. Blue-eyed black lemurs at the DLC and other institutions worldwide form a genetic safety net for their species. Each new birth helps sustain a healthy and genetically diverse population of blue-eyed black lemurs for the long-term future. Photo by Sara Clark. 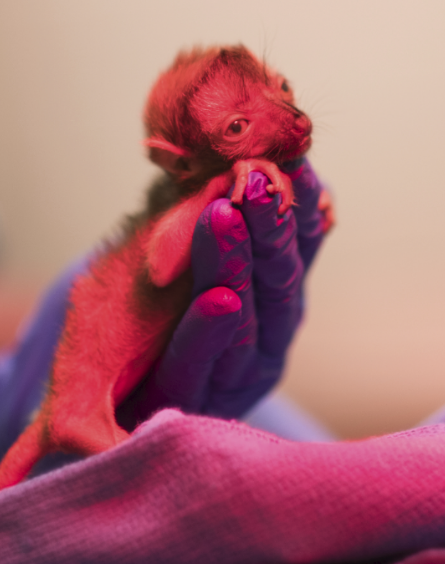 Ranomasina stays warm under a heat lamp shortly after delivery. In preparation for Velona’s C-section, DLC veterinarians consulted Elley Schopler, a lactation consultant at the Women’s Birth and Wellness Center in Chapel Hill, NC. “We asked her if there was anything we should think about from a c-section perspective.” Among her suggestions was swabbing the infant after birth with fluids from Velona’s birth canal: “In humans, because c-section babies don’t pass through the birth canal, they don’t pick up natural beneficial bacteria from mom – and at least in humans, that can cause health issues later in life.” Newborn Ranomasina was thus swabbed liberally with her mother’s microbes. Another possible benefit, in addition to establishing the infant’s microbiome, was that Velona might bond more quickly with infant that smelled like her. Photo by Sara Clark. 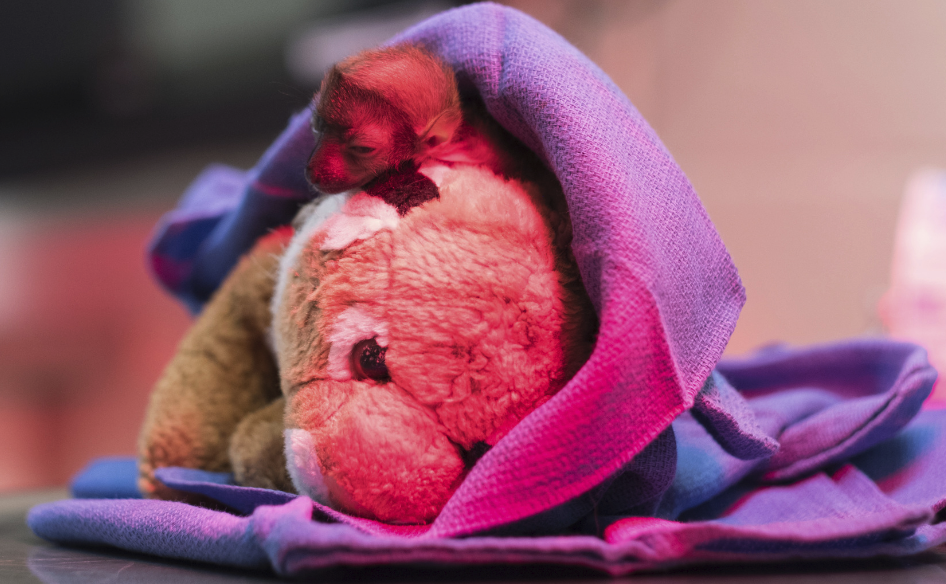 Blue-eyed black lemur infants are highly vocal, and Ranomasina is no exception. “She’s been climbing all over Velona, moving around and making noise,” says Newton, who affectionately calls the baby “Squeaker.” Here, the newborn infant clutches a stuffed tiger – a proxy for her mother while the veterinary team wrapped up Velona’s surgery – while snuggled under a heat lamp. Photo by Sara Clark. 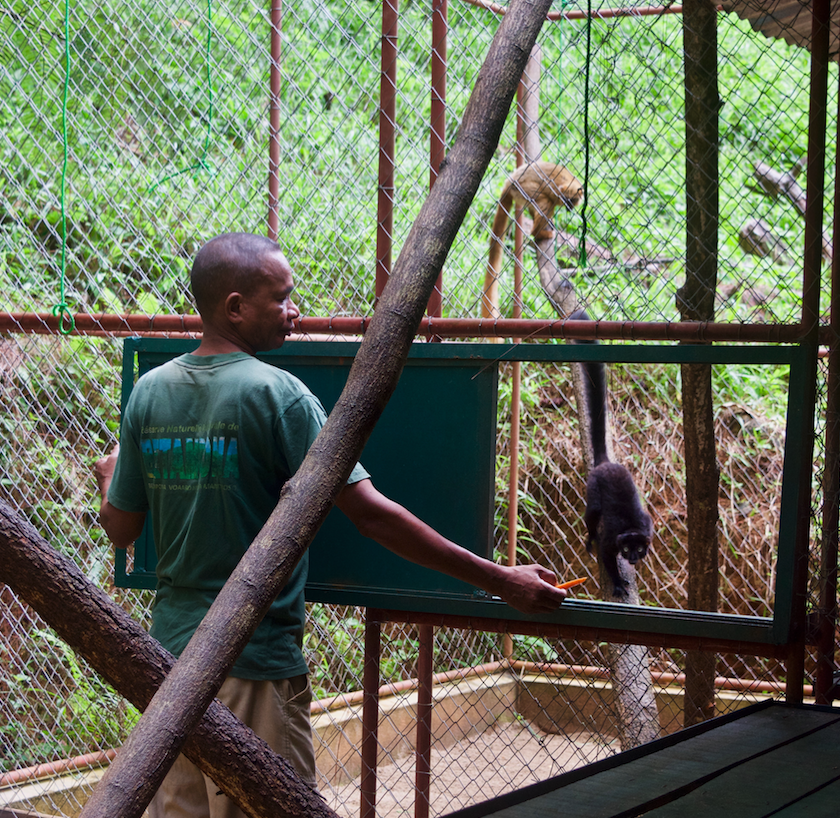 Ranomasina’s parents, Velona and Mangamaso, were born at Parc Ivoloina in Madagascar (pictured here) and imported to the U.S. in 2017. “Because of the continuing pressures of population growth, poverty, and forest habitat destruction, it’s a very real possibility that blue-eyed black lemurs could go extinct in the wild,” says DLC curator Cathy Williams. “If they do, then the whole species’ survival will be based on animals surviving within human care.” Photo by Peter Larsen. 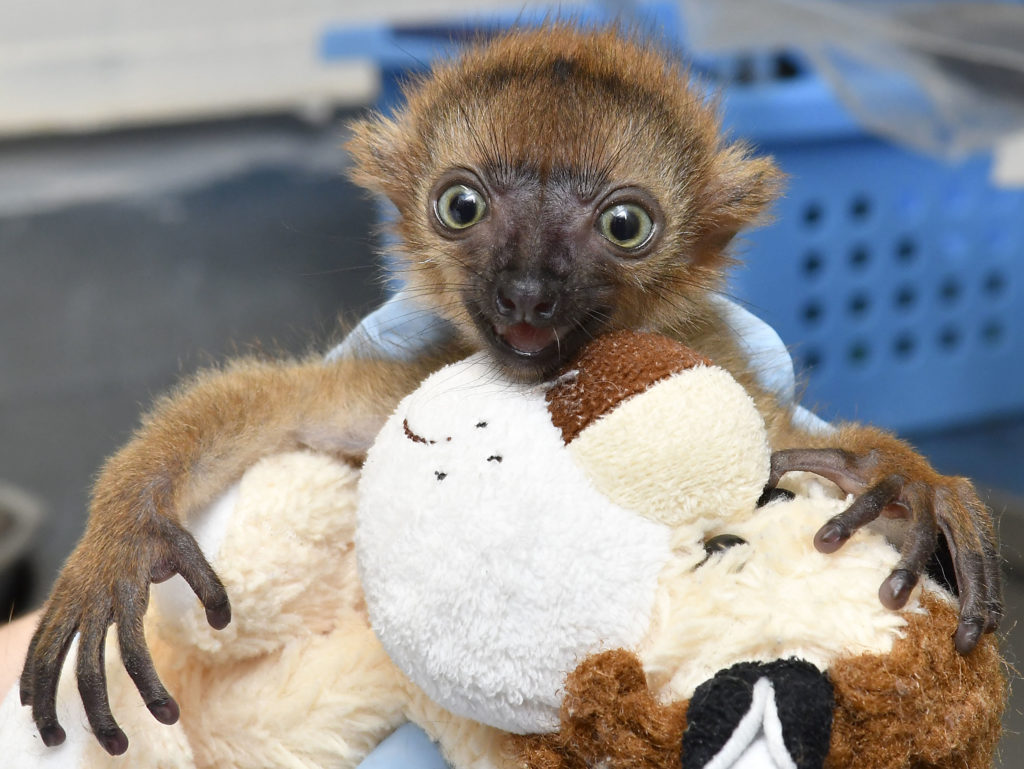 First-time mother Velona required time and space to adjust to her new baby. Now that she’s bonded with Ranomasina, “she’s being very protective of her infant,” says Primate Technician Becca Newton. “We’re keeping her housing area very quiet. It took a couple of weeks before she was truly comfortable with me being around her. I stood back, getting observations – making sure everyone was bright and healthy – but I gave her space because I didn’t want to stress her. I’ve been going by her rules, letting her guide me on what she’s comfortable with.” Photo by David Haring.

The Duke Lemur Center’s veterinary team is unmatched in its knowledge of lemur medicine, but we rely on private donations to help cover the cost of vet care, medicine, and new state-of-the-art diagnostic equipment – all of which helps make births like Ranomasina’s possible. Please consider making a donation today in honor of Ranomasina’s birth. Your gift at any level makes a difference!