WAHOOO! We raised $10,000 in 14 hours to purchase an ICU kennel for our lemurs! Thank you so much to everyone who donated! You are seriously amazing. Our hearts are warm — and thanks to the ICU, our baby lemurs will be, too! Read more here: https://lemur.duke.edu/new-icu.

What do all of the the lemurs and lorises pictured below have in common? Every one of them received life-saving treatment in the Duke Lemur Center’s intensive care (ICU) kennel! 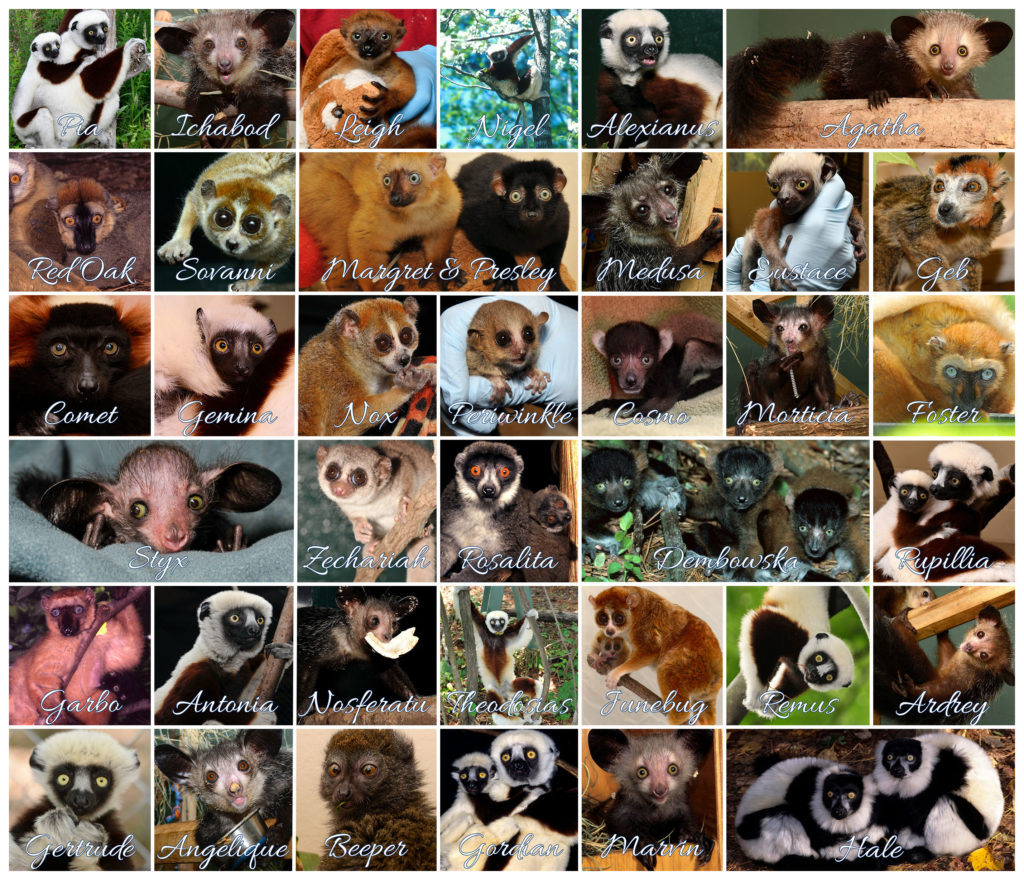 The Duke Lemur Center’s veterinary team is unmatched in its knowledge of lemur medicine, but we rely on private donations to help cover the cost of vet care, medicine, and state-of-the-art diagnostic equipment – all of which makes life-saving care for our highly endangered lemurs and lorises possible. Please consider making a donation today in honor of our vets and their amazing care for the DLC’s lemurs. The need is critical, as the vet department needs to replace its Intensive Care Unit (ICU) – and a new one costs $10,000.

Please read the stories below and know that there are many, many more just like these. Our current ICU is beyond repair, birth season is just around the corner, and $10,000 is urgently needed for this unanticipated need this fiscal year. Your gift at any level will make a difference. Thanks so much for for helping us literally save lemurs’ lives!

Warmth for ill or rejected infants: Rejected infants like blue-eyed black lemurs Presley and Margret, aye-aye Agatha, and ruffed lemur Cosmo do not have the ability to maintain their body temperature, and one of the first causes of infant mortality is hypothermia. Have you ever heard not to touch a baby animal because its mother will reject it? Actually, what is more critical is a cold infant. Mother birds often lack a sense of smell. They reject cold babies. Slowly warm that very infant and the mother will gladly take it back. The same is true for lemurs.

Critical care for adults: The veterinary and animal care teams rely on the ICU for more than just keeping infants warm, and it can literally be a life-saver for seriously injured and ill adult lemurs like Beeper and Periwinkle, who require oxygen supplementation along with temperature and humidity control. When an animal is critically ill, it can lose its ability to maintain its temperature or spend precious energy trying to stay warm. A temperature-controlled environment with the ability to supply humidity or nebulized medications can be the difference between life and death in these situations.

Life-saving features: Features of the new ICU will include an oxygen system that accurately and safely delivers pre-heated oxygen, radiused corners that ensure easy cleaning of surfaces, and a special door that enables gentle and safe handling of the patient so as not to create undue stress during treatment. 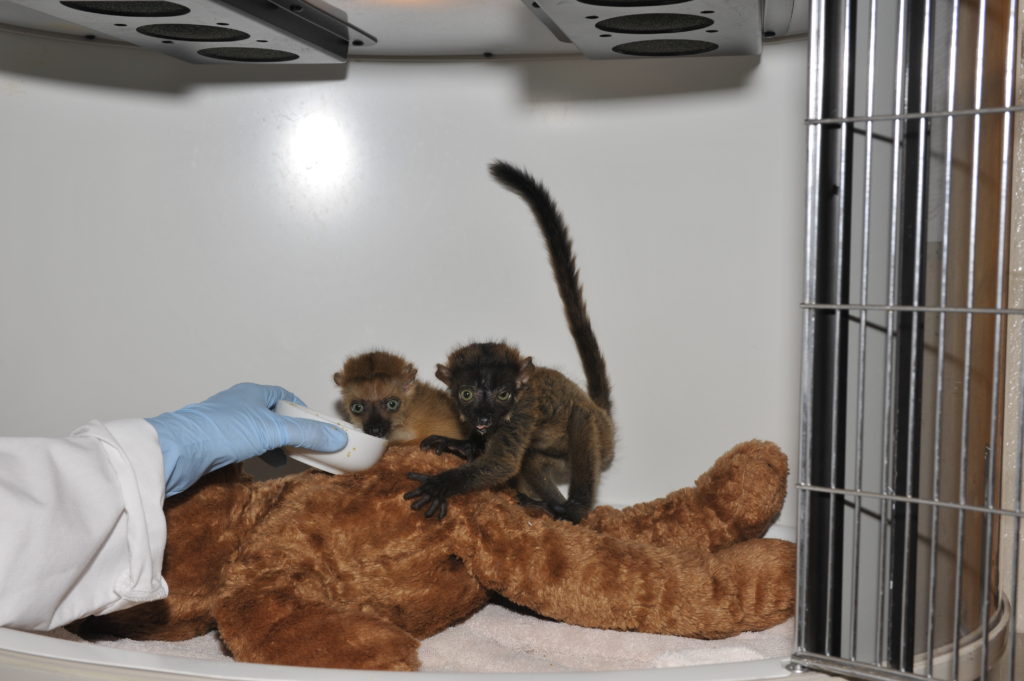 In April 2010, one-month-old blue-eyed black lemur Presley was bitten and rejected by his mother, Foster. Given the likelihood that Foster would also reject and possibly injure her second infant as well, both Presley his twin sister Margret were brought into the treatment room and placed in the warmth and safety of the ICU kennel. Both infants lived in the ICU kennel full-time from April 27 until May 4, when they were stable enough to move together into a larger enclosure.

Today, Presley is the darling of the summer tour path and one of the most popular adoptees within the DLC’s Adopt a Lemur program. He is so beloved, in fact, that he is the MOST adopted lemur during our big Lemurpalooza events each year! Margret is doing well, too, living with mate Tarantino and recently giving birth to her daughter Leigh. 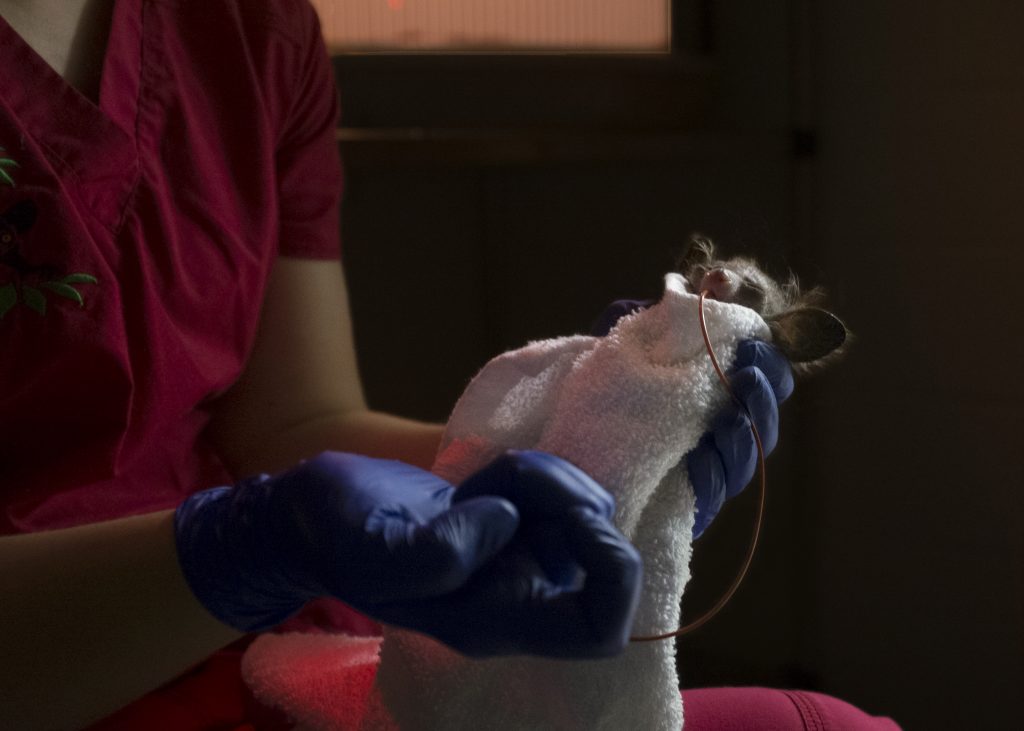 Pictured: The ICU kennel, glowing a warm orange in the background of the image above, was a critical component of Agatha’s life-saving care.

Agatha, the first aye-aye born at the Duke Lemur Center since 2011 – and only the 24th of her kind in the United States – owes her survival to intensive round-the-clock care and to the veterinary ICU.

When Agatha was born on June 7, 2017, she was briefly removed from the nest and given a quick check by DLC veterinarians. To their dismay, Agatha weighed a mere 74 grams – only two thirds the typical birth weight for her species. Only one aye-aye infant had ever survived after being born at a lower birthweight.

It was soon apparent that Agatha was not gaining sufficient nourishment from her mother, Medusa. To keep her from losing even more weight, hand supplementation was implemented. “Agatha was a unique case,” said Cathy Williams, veterinarian at the Duke Lemur Center for 21 years. “She required intervention by the veterinary staff to provide supplemental warmth and formula until she gained enough strength that she could return to her mom full time.”

After every feeding, Agatha was either returned to her mother’s nest or, if her temperature was low, placed in the cozy ICU kennel in the vet lab to warm her body to a healthy temperature. Supplemental warmth was critical, as young infants do not have the ability to maintain their body temperature. Have you ever heard not to touch a baby animal because its mother will reject it? Actually, what is more critical is a cold infant. Mother birds often lack a sense of smell. They reject cold babies. Slowly warm that very infant and the mother will gladly take it back. The same is true for lemurs.

By June 25, she and Medusa had finally bonded to the extent that Medusa could take over 100% of the feeding and warming responsibilities and the veterinary department eagerly handed mom the reigns to Agatha’s care. 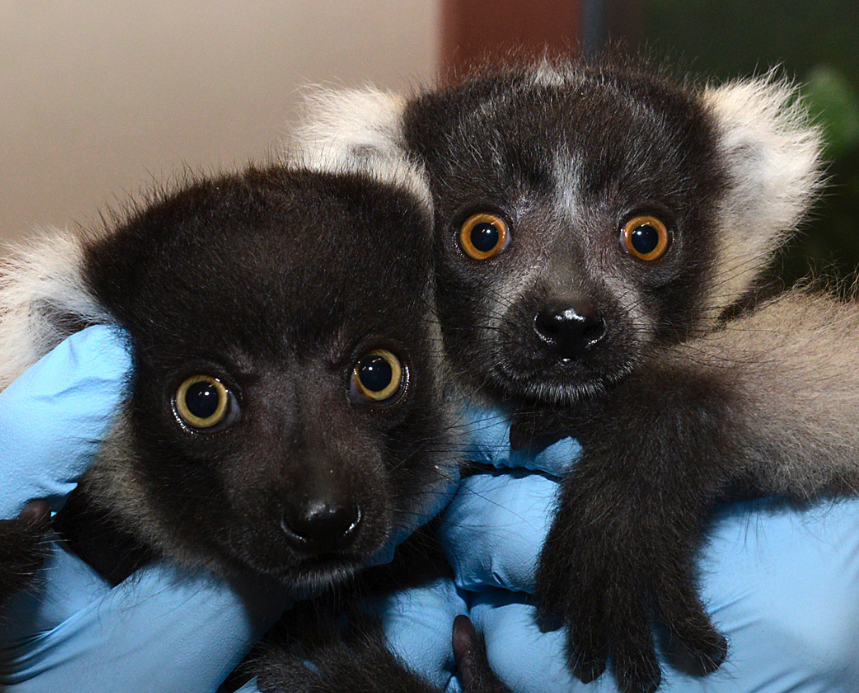 When Halley’s twins Cosmo and Astro were born in June 2016, the new momma initially ignored them – leaving them alone together on the floor a couple of feet away from her, cold and still coated with afterbirth. Halley and both infants were quickly taken to the ICU kennel in the vet lab to warm up, and in the confines of the kennel, Halley’s maternal instincts began to kick in: she began calling to the infants and pulling them under her.

The next day, however, Cosmo’s weight had dropped from 85 grams to 76 grams. Although responsive, he was less active than his larger twin Astro and was laying apart from his mother and brother. Cosmo was brought into the treatment room and warmed in the ICU kennel, then given fluids and a few lessons on the ABCs of nursing by placing him on Halley’s nipple to allow some one-on-one quality time with mom. The process was repeated throughout the day, and thankfully Cosmo was a quick learner: after only 24 hours of instruction, he knew the way to the snack bar on his own! The trio returned home to the Miaro building, where Halley did a great job caring for her twins. 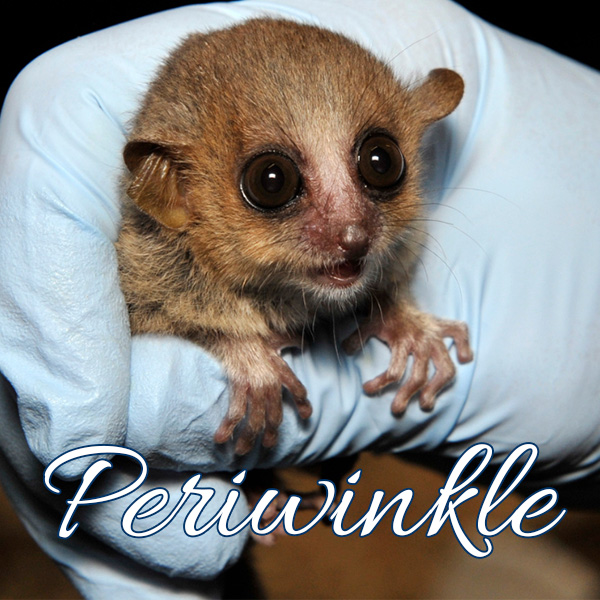 Mouse lemurs have high metabolisms and are prone to getting low blood sugar; unfortunately, if their blood sugar gets too low, they can become unresponsive and have seizures or even die. When 10-year-old Periwinkle, a mouse lemur, was found unresponsive in her enclosure one Sunday afternoon, she was immediately treated with fluids and dextrose and placed in the ICU kennel with food available. The ICU kennel enabled her to recover with minimal stress on her body, and its warmth helped her maintain her body temperature with minimal energy expenditure. Her condition improved dramatically overnight, and she was fed more frequently and soon released back into her home enclosure. 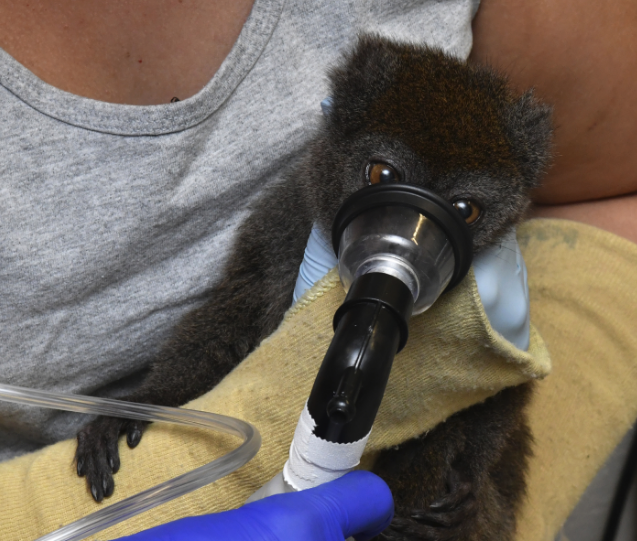 Last August, 18-year-old bamboo lemur Beeper developed pneumonia and spent five days on oxygen in the DLC's ICU kennel. Beeper had the distinction of becoming the first lemur to be nebulized for treatment of lung disease, here administered by Primate Technician Mel Simmons with the assistance of Vet Tech Megan Davison.

All gifts through the links above to our unrestricted donations page between now and the end of the day on GIVING TUESDAY (November 27, 2018) will go toward this very special purchase at the Duke Lemur Center! All donations are tax-deductible.

Thank you so much for your support! If you have any questions, please contact our development officer, Mary Paisley, at (919) 401-7252 or mary.paisley@duke.edu. She would love to hear from you!