Conceived and produced by Secret Station Films founder Joe Whelski, the project is a labor of love for all those involved. This year’s spot is an animation, created by Titmouse and spearheaded by director/animator Parker Simmons and producer Lauren Siller. Crafted by the writing team of Alyssa Briddes, Nick Goodey, and Joe Whelski, with sound design by Hungry Tapes and VO recording by BtOven Music, the 45-second commercial is slated to be released in late October in celebration of John Cleese’s birthday (October 27) and World Lemur Day (October 28).

John Cleese and all others involved in the project lent their time and talent to the commercial pro bono, at no charge to the DLC. We’re incredibly grateful, and we hope you love the final result just as much as we do!

While lemurs make wonderful symbolic adoptees, lemurs should never be kept as “real” pets. Trust us, they’re wild animals—and like the Killer Rabbit of Caerbannog, they’re not as cuddly as they look! (Yep, lemurs have those “nasty, big, pointy teeth” too.) We’d never film a commercial like this as a live-action video, for the lemur’s health and well-being as well as the human’s.

In honor of the 80th birthday of legendary British comedian and lemur supporter John Cleese, the Duke Lemur Center released the first in a series of charity commercials starring John and the lemurs of the DLC! The first spot premiered on World Lemur Day on October 25, to spread awareness for the plight of lemurs everywhere and to inform people how they can help by symbolically adopting their very own lemur through the DLC’s Adopt a Lemur program.

NYC director & producer Joe Whelski has partnered with the Duke Lemur Center to create a commercial encouraging viewers to participate in the DLC’s Adopt a Lemur program. John Cleese has graciously lent his voice to the spot. The commercial features the work of top-notch NYC creators, including Alan J. Carmona as Director of Photography, sound work by BtOven Music, editing by Matt Hartman, co-producing by Mila Milosevic, and Nick Goodey and Alyssa Briddes sharing writing duties with Whelski.

John Cleese, Joe Whelski, and all others involved in the project have lent their time and talent to the commercial pro bono, without charge to the DLC. We are so incredibly grateful, and we’re thrilled with the final result!

The Adopt a Lemur program helps fund the $8,400 per year cost to care for one lemur at the DLC, as well as aiding our conservation efforts in Madagascar.

According to his bio, “John Cleese is a tall person who loves lemurs, coffee, and wine.”

The legendary British comedian has a long history of lemur love.

In 1998, he filmed “In the Wild” – a documentary film about the black and white lemur reintroduction project – with DLC staff members Charlie Welch and Andrea Katz in Madagascar. Before being reintroduced into Betampona Reserve in northeastern Madagascar, the American-born lemurs had attended “lemur boot camp” in the DLC’s forested enclosures to prepare them for life in the wild.

In an interview in 2014, Cleese described the film as his favorite thing he’d ever done: “I made a little documentary about lemurs in Madagascar once, and there was something about that I thought was very warm and mellow, and I liked that, I liked that a lot. And it enabled me to make a few sort of jokes that I hadn’t made before, and it was something really fresh.”

Funds from the U.K. premiere of the movie Fierce Creatures, a follow-up film to Cleese’s A Fish Called Wanda, provided critical support for the reintroduction project. “Without that core project funding, which was directed by John Cleese and colleagues in the U.K., the reintroduction would never have happened,” recalls Welch. “In addition to being a brilliant and funny man, he is a genuinely caring person and passionate about lemurs and conservation. We owe him so much.”

He even has a species of lemur named after him: Avahi cleesei, also known as Cleese’s woolly lemur.

In November 2017, Cleese dropped by the Duke Lemur Center to visit Aemilia the sifaka, Medusa and Agatha the aye-ayes, and members of several other species – including mouse lemurs, the first he’d ever seen.

“Spent a lovely afternoon at the Duke University Lemur Centre and saw my very first Mouse Lemur,” Cleese tweeted that evening. “Two of their Blue-Eyed Lemurs were born there in 1984! They’re beginning to move around at my speed…”

The Monty Python star first visited the Duke Lemur Center in 2015. Staff and lemurs alike look forward to his next trip to Duke, when perhaps we can all dance with the sifaka like “Edwardian waiters on benzodrene”! 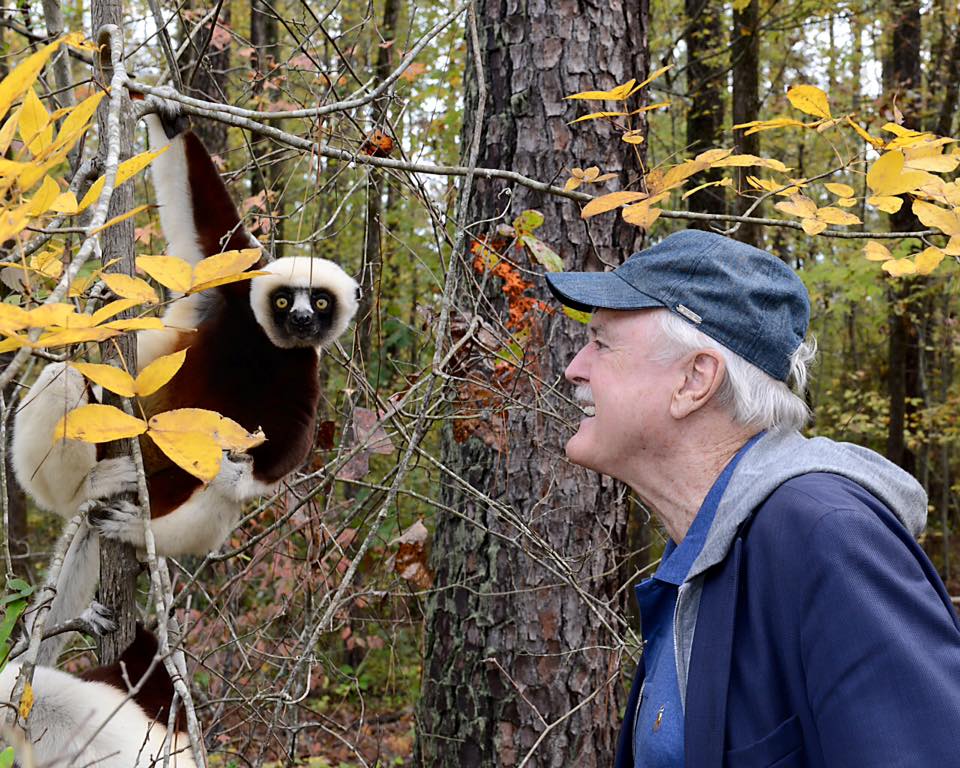 Above: John Cleese with Romulus, a Coquerel’s sifaka, at the Duke Lemur Center in 2015. Photo by David Haring.