Lemurs exhibit a stunning array of forms and physiologies. The largest living lemurs stand several feet tall, while the smallest are the size of a mouse. 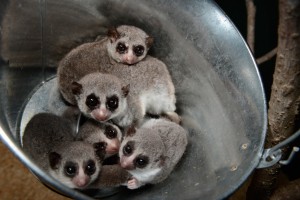 By studying hibernation in the fat-tailed dwarf lemur, researchers at the Duke Lemur Center are providing a window into why humans sleep. Photo by David Haring.

One species can safely digest cyanide in amounts sufficient to kill an elephant. Others can hibernate to survive periods when food and water are in short supply. Ongoing work is exploring the hibernation habits of lemurs — our closest genetic relatives known to hibernate – to understand why humans sleep. By identifying similarities between lemurs and other hibernating animals, researchers may one day be able to induce hibernation-like states in humans. Being able to push humans into standby mode by temporarily reducing heart rate and brain activity could buy time for patients who have suffered head trauma or heart attacks, extend the shelf life of transplant organs, or even open the door to long-distance space travel.

Snoozing lemurs hint at why we sleep
September 6, 2013
Futurity

Hibernating lemurs hint at the secrets of sleep
Sept 4, 2013
Phys.Org

Hibernating is not the only unique thing about this primate
Sept 4, 2013
Science 2.0

You might find a hibernating lemur underground
May 2, 2013
Wild Things

Are these dwarf lemurs the key to long-distance space travel?
May 2, 2013
io9.com

The hibernating lemur that feeds on its tail
May 2, 2013
New Scientist

Krystal, A., et al. (2013). “The relationship of sleep with temperature and metabolic rate in a hibernating primate.” PLOS ONE.